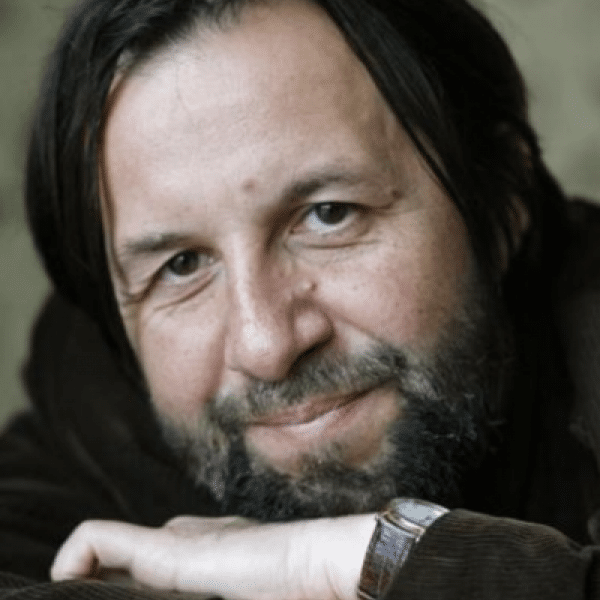 Krzysztof Czyżewski is introducing a new civic space where citizens can peacefully discuss the conflicts that separate them. Focusing on educating a new generation of young people who are tolerant and sensitive to diversity in a contemporary world, Krzysztof is establishing a network of cultural and social centers that brings together local residents from diverse backgrounds to develop their communities.

Krzysztof engages entire communities in a broad array of long-term strategies that address the cultural and racial prejudices that exist in their neighborhoods. He has created a complex program to address historical sources of conflict and rediscover community history. Krzysztof provides an open space for meeting and confrontation of different points of view, cultures, and nationalities. Once the walls between cultural and religious groups are torn down, participants can ultimately become cocreators and visionaries of a new integrated community.
In order to model the new civic society, Krzysztof has launched the Borderland Foundation in Sejny, a village on the border between Lithuania and Poland. Through this local pilot, the Borderland Foundation is able to demonstrate to a broader audience how to create initiatives that transform conflict into a positive, new community identity. Looking ahead to long-term solutions, Krzysztof&#39;s work draws on the participation of all community members but specifically targets young people. By transforming young people&#39;s perceptions and roles within communities scarred by historical divides, the Borderland Foundation is creating a new vision for the future of those communities. By operating as a training and publication center, Krzysztof&#39;s work in Sejny is spreading globally.

Because of the dramatic political changes experienced throughout Europe in the last decade, communities in the region are confronting their cultural diversity in new ways. Misunderstandings, historically rooted prejudices, ignorance, and intolerance stemming from religious or cultural stereotypes are particularly vivid in border areas. Given the enormity of the problem, this issue is often dealt with on a microlevel, with only certain aspects of the problems presented or discussed. The media contributes to this problem, as it tends to pick up hot topics or particular aspects, limiting the accurate exchange of fundamentally divisive issues.

Worldwide, wars and ethnic conflicts are typically dealt with on a national level through policies and political gaming. Through this process, the plight of individuals is often lost. As individuals, families, or small communities hold onto lingering resentments and issues, the conflict spreads, ignited often by self-serving politicians. Anger, hatred, and anxieties are passed on to younger generations who grow up in environments of hostility toward their fellow citizens. By allowing this pattern to continue, progress becomes impossible, and communities continue to harbor the very prejudices that caused the conflict initially.

Artists, writers, and social activists have traditionally been drawn to the issue of ethnic conflict. Through their various mediums, these individuals tend to use one-time or short-term solutions to the problems they want to address. They host conferences, workshops, festivals, and events. As the issue of ethnic conflict is buried deep in the psyche of community members, addressing this problem at the surface level cannot create adequate space for resolution and healing. While such activities are able to mobilize people for the short-term, they often generate enthusiasm that simply fizzles. Single initiatives tend to address specific aspects of the problem and are not carried out cooperatively with other organizations. The need is for a cohesive, complex program consisting of long-term interventions to create ownership and active participation of community members in creating a new, open, plural society.

In 1990 Krzysztof, with the support of local authorities, established the Borderland Foundation in Sejny. Inspired by literature from his university days, he chose Sejny because of its location on the borders of Poland, Lithuania, Belarus, and Russia. The area still contains many traces of different cultures including those of the Poles, Lithuanians, Jews, Russian "Old Believers," Belarussians, Ukrainians, Roma, and more. The tremendous diversity made this location ideal for building a model of cooperation and mutual enrichment among multicultural communities. The location of the foundation enabled Krzysztof to study, learn, and observe from many different cultural and ethnic groups, religions, and traditional practices that had a direct impact on everyday life and people's relationships in the region. Krzysztof is using this site as a model for community integration throughout the world.

Krzysztof is convinced that by understanding neighbors, past or present, people can learn how to coexist peacefully. He works with societies proud of their pluralistic traditions and also within areas where multicultural diversity may lead to new conflicts and clashes. Krzysztof uses social, cultural, and educational programs to help people get to know, understand, and respect their own history, as well as the history, culture, and traditions of their neighbors. In generating "active culture," there are no divisions between those who perform and those who watch. The model is based on interaction, active participation, and cocreation. Local people, villagers, and inhabitants of borderlands organize cultural activities in the context of local problems and issues. Krzysztof abandons the idea of one-time events and dedicates himself to establishing long-lasting processes of everyday work in the local community, dialogue, and constant exchange with others. Gatherings with authors, writers, artists, and local individuals are planned and organized by local people. A number of activities are focused around having youth and adults participate in the renovation of the ancient buildings, monuments, synagogues, and cemeteries.

Krzysztof believes that children need to understand the past in order to shape the future. Hence, several initiatives have been created to include children and youth. Young people visit the elderly living in villages in several different countries in the border region. They take part in active research and documentation, get to know people and learn how to develop their own identity. The program has grown to become an adventure by which children discover the past. Children started The Sejny Chronicle, which has involved projects like collecting and then exhibiting old postcards and photos. There are a number of programs and initiatives that include teaching traditional craft skills, music lessons, and theater classes. Children who joined the foundation in 1990 are now teaching the next generation of kids.

The Sejny model actively trains community builders. They participate in the international educational program "The Borderland School" aimed at training the leaders of major initiatives and organizations of multicultural communities in Europe and Asia. Since 1997 the school has hosted five groups of young people with 30 people a year. The training has resulted in the creation of several nonprofit institutions and intercultural exchange projects throughout Central and Eastern Europe. Participants take part in three one-week working sessions and two one-week visits to multicultural regions. The training includes lectures, seminars, practical workshops, and discussion sessions and excursions. The foundation also runs other initiatives to stimulate scholarly and public debates on the region's most important issues.

In order to share knowledge and understanding, and promote cooperation beyond borders, the Foundation created the Borderland Cultures Documentation Center. It serves as a resource for materials on human rights, ethnic minorities, tolerance, identity, national culture, and more for Central and Eastern Europe, the Caucasus region, and Central Asia. The collection houses over 40,000 items (books, journals, films, records, press clippings) and serves as a reference library for scholars around the world. Krzysztof wants to document and publish achievements of young people as well as have them partake in open discussion on the most current issues. In 1993, a highly praised publishing house opened to promote prominent European and international writers as well as international scholarly works of the region. Foundation programs and initiatives are widely promoted in media both in Poland and abroad. The organization has its own film production studio and publishes its own magazine, Krasnogruda.

From its humble beginnings in Sejny, the foundation has developed into an institution recognized throughout Europe as a pioneer and leader in the field of promoting understanding between cultures through innovative activities. For 12 years, Krzysztof has collected experiences from this unique organization operating on the borders of different cultures and nationalities. With the help of the documentation center and training programs, Krzysztof is ready to launch his cultural, educational, and civic programs globally. He is now cooperating with 13 locations in Yugoslavia, Ukraine, Bosnia and Herzegovina, Hungary, Lithuania, and Poland. Ten of them have already formed local associations. In order to extend to other areas such as Central Asia and the Caucasus region, Krzysztof has developed new initiatives. An online newsletter is a source of information for all the participating institutions and he is collecting funds to become a grant-giving organization to support partnering organizations in developing their activities. He is also defining the curriculum for the expansion of the Borderland School concept.

Krzysztof envisions that in the next 10 years, 40 to 50 new centers will be created. The next five years will provide the most dramatic growth phase. The next cycle would consist of similar initiatives growing out of the newly established centers. In the next five to 10 years, the number of participants will grow from 500 to 10,000 individuals.

Krzysztof emerged as a creative, responsible, and natural leader at an early age. With his creativity and temperament, he became the president of his high school class and captain of the school football team. Starting in his youth, he was known by others as a "practitioner of ideas" Nicknamed "Korba," which translates to someone who is active and always coming up with new ideas, Krzysztof started to realize that he had the power to encourage people to be more productive with their lives. This natural evolution of his leadership role was in direct conflict with his attraction to rebellious behavior, a tension that would dramatically shape his career path.

Krzysztof has always enjoyed theater as a public venue for the exploration of ideas. Although he had the opportunity to play football professionally, he eventually gave this up in order to pursue his other loves, writing and reciting poetry. After passing his university entrance exams, Krzysztof began studying Polish literature, drawing on his larger fascination with art and Polish authors. From 1977 to 1983, he cocreated and operated the theater group Gardzienice, designed to bring city theater to rural areas. It was through this experience that Krzysztof's interest in theater concretely merged with his anthropological fascination with cultural borders.

Driven by his own experiences of living on the "border" both socially and economically, Krzysztof's work with theater became infused by his intense interest in the study of culture and cultural borders. This was reinforced as he traveled the world, gathering stories of the elderly in remote village areas in order to better understand traditional cultures. Raised in a marginalized community and frequently a contributor to the underground movement, Krzysztof became involved with alternative societies. In 1983, during martial law in Poland, he established the periodical Czas Kultury (Time of Culture). Until 1989, it was an underground publication but is now one of the most important cultural periodicals in Poland. For many years now, Krzysztof has been writing and publicizing articles on the active role of culture in multicultural communities. His involvement in a number of cultural initiatives during the difficult transitional period in Poland was possible thanks to the carpet cleaning business he started in 1984.

In recognition of Krzysztof's contribution to public discourse, Jerzy Giedroyc, one of the most influential Polish intellects of the last 50 years, publicly announced that Krzysztof would carry on in his footsteps. In 1989 Krzysztof parted ways with many of his theater peers who had gone mainstream once Poland became an independent state. Rather than following in this ascetic direction, Krzysztof realized he needed to commit himself to overcoming the deep historical burdens faced by borderland communities. So with friends and family, Krzysztof moved east in order to start the Borderland Foundation and commit his life to modeling the living civil society.