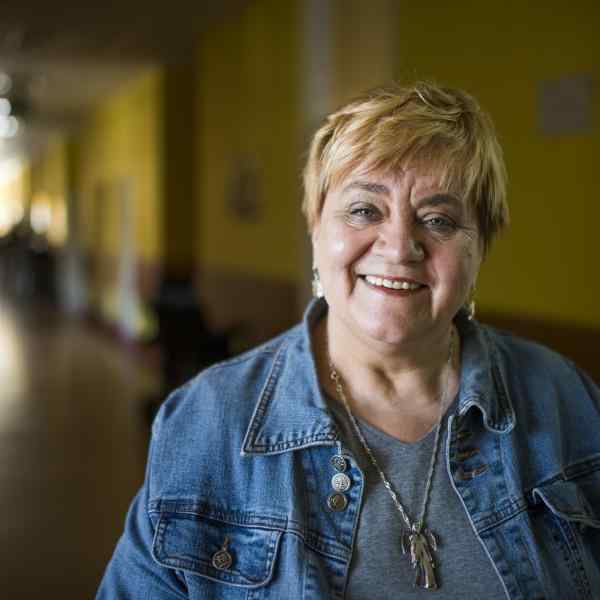 Janina Mironczuk is creating a space in society for the long-term care of apallic patients. Having recognized apallic patients as an underserved group in the Polish health care system, Janina is building a nationwide system of care for patients in a vegetative state that includes new treatment methods, professional training, support to families of apallic patients, and awareness building.

Janina is creating space for the care and rehabilitation of apallic patients, a group traditionally ignored by Poland’s health care system. Her system of specialist centers offers care for patients both during their vegetative state and after they have awakened. Janina is leading change in the medical field, proving that there is “life in a coma” and that apallic patients possess human dignity, like every patient. At the same time, Janina is solving an important ethical problem—the disregard for this group of heavily disabled people by the health care system and society.

Janina has developed innovative methods to work with apallic patients, including various sensory activities, she provides the best possible care to keep individuals in good physical condition during their vegetative state, but also with the aim of awakening patients from this state. Through introducing the idea of neurological rehabilitation for awakened adults, which is a completely novel form of treatment in Poland, Janina is designing from scratch the system of care for their awakening, thereby offering a higher chance of recovery.

To deepen her impact, Janina has organized a successful volunteer movement that is changing the public misperception that the apallic state is a terminal illness. She is engaging the families of apallic and awakened patients by offering therapeutic support services and teaching them how to professionally care for their sick family members. Janina developed standards of training for professionals and families, and is significantly influencing routine and regulations in this underserved medical area.

The health system in Poland does not provide specialist care for patients in a vegetative state. Once the apallic syndrome is diagnosed, patients are sent from one hospital ward to another, or back to their homes, from where they are admitted to long-term care centers or hospices where they show no signs of improvement. If these patients wake up from their vegetative state, long-term care centers and hospices are ill equipped to provide the necessary rehabilitation services.

Although the number of apallic patients in Poland is difficult to estimate, the size of this group is growing and is disproportionately comprised of victims of car accidents. There are only four health centers in Poland, providing a total of 50 beds for patients in apallic states and inadequate standards of care. Quality support services available for those who do wake up from a vegetative state are more scarce. The only choice is for patients to return to their families, where the effects of professional rehabilitation are quickly squandered.

Families of apallic and awakened patients are left completely abandoned by Poland’s health care system; they do not have the necessary training or psychological or financial support. They have nowhere to go to receive appropriate help for their sick family member. After many years of this strain, they begin to call for euthanasia, which they would have never considered if they had been given better training or support services.

On top of this, the public perception toward patients in vegetative states is extremely misinformed; the condition is usually wrongly associated with a coma or terminal illness. Few realize that apallic patients do indeed feel pain and relief just like everyone else; in fact they often feel, see, and hear but cannot respond verbally. However, very few health care professionals realize that appropriate care is just as much about providing medical services as it is about participating in simple, normal activities, like going out for a walk.

To fill this gap in the medical system, Janina is building a model of specialist care for apallic patients in Poland’s health care system. Her model promotes various approaches and involves multiple players and by introducing innovative medical treatments to the health care system, she is developing support services and training for health care practitioners and family members, while she is generating an informed and engaged public. Having opened the first medical care clinic in Toruń that offers space for patients in vegetative states, Janina’s model of care embraces various forms of innovative sensual stimulation for “sleeping” patients: From playing music, to stimulating sight by putting wall tapes on the ceiling, and through touch, by mixing dough. Patients also take part in typical social activities, such as barbecues with other patients, a street parade to thank people who donated 1 percent of their income tax to apallic patients, or music and theater performances.

At present, patients from all over Poland are on the waiting list for Janina’s medical clinic. The high demand for her clinics has inspired Janina to develop a model that can be franchised by other institutions in Poland. The standards being developed are based upon best practices learned in her previous endeavor, the Academy Against Cancer, which offers complementary support programs for patients diagnosed with cancer, and has been franchised to multiple sites.

Families are an important element of the approach developed by Janina, both by involving family members in the care of their loved ones and by supporting the financial and emotional needs of families. Understanding that family members—most often mothers—have not had a single day off since their loved one entered the apallic condition, Janina introduced therapeutic camps for families. The camps offer psychological help and entertainment to family members, such as a visit to a stylist. After a few days of relaxation they are then revitalized to continue their daily care work. In 2007 and 08, each four, three-day camps had 20 participants.

Since the medical system only covers medical costs, other types of support for families such as psychological help or professional training, are not available. In 2002 Janina established the Light Foundation to offer complex help to patients and their families and to raise awareness in society about apallic syndrome. As a part of this effort, she has built a volunteer movement that advocates for the care of apallic patients and organizes conferences on the topic of the vegetative state. Approximately 300 volunteers are engaged in various projects every year, many of them young people and students.

The success of the foundation is apparent through its growing budget, which is funded primarily by individual donations. In 2007 the budget was approximately 300,000 Polish zloty, (US$104,344) whereas in the first three months of 2009 the budget increased by that same amount. In 2009 Janina’s foundation received 56 percent of 1.4M zloty from “1 percent donations.” (Polish tax payers can donate 1 percent of their income tax to an organization of public benefit.) Given that Janina’s organization is not advocated for through popular media, since the issue she is dealing with has to be promoted in a very delicate way, the success of the foundation is all the more significant.

Janina recognized the importance of providing services for awakened patients after 17 of her apallic patients awoke from their conditions between 2004 and 2008, but whose signs of progress after rehabilitation were squandered as soon as they returned home or were moved to a long-term care center. She began to build a system of care for awakened patients funded by the Light Foundation and support from the municipality of Toruń. EFATA (Hebrew for “Open yourself”) will offer a place for patients who are in the process of awakening and for those already awakened, and who do not have families to care for them. The center will open in October and can be replicated according to the franchise model, i.e. Academy Against Cancer.

To provide the awakened patients the best care possible, Janina is introducing the idea of neurological rehabilitation, which, although already practiced in Western Europe, is a completely new treatment in Poland. She plans to learn from the experience of existing centers in France and the U.K. and train her personnel there. To complement the home for the awakened, Janina is working on reconstructing the idea of “environmental nurses”—teams of two to three qualified nurses supported by the national health care system provide home health care for 10 to 15 patients in vegetative states, thereby reducing the burden on the families while also teaching them how to take care of the patient.

Since childhood, Janina wanted to become a health care professional. This dream became a reality when she won her high school competition for nursing and had open access to attend a medical university. In 1978, after a short professional practice in a hospital, she was offered the job of organizing the Center for Upgrading Health Care Personnel in Toruń. Then in 1982, after exceeding expectations, Janina was given the responsibility of organizing the post of the head nurse in the region.

As a young nurse Janina encountered the late Ashoka Fellow Stanisław Duszyński (2001) who was the head of the social center in Toruń at that time, and introduced the idea of natural rehabilitation for people with disabilities. Janina shared his belief that apallic patients are normal members of society and should be respected and treated with dignity.

In 1991 Janina decided to work in a nursing school and soon discovered that the school curriculum failed to teach students how to deliver professional care to terminally ill, often elderly, patients. Having earned high esteem in the municipality due to her achievements in the state medical structures, she was offered a building to organize a hospice as she saw fit. Janina’s center was launched in 1993. When the first apallic patient was directed to her hospice, she realized that this patient was not meant to die, but instead, required special care and multi-sensual stimulation to have a chance to recover. Janina engaged health care professionals, authorities, and sponsors to open the first Medical Care Clinic in Toruń in 2003, offering space for 22 patients in vegetative states.

Janina then encountered patients with cancer who wanted admittance to her hospice, and recognized a further gap in the medical system: Patients diagnosed with cancer are left without psychological attention. In 2005 Janina launched the Academy Against Cancer in Toruń in partnership with the Polish Psychological Society, to assist with the psychological needs of patients struggling with cancer. The academy operates in nine cities through four branches of the Light Foundation and has been replicated by four independent associations. In each city of operation, 200 to 600 patients benefit from the program every year. Janina is working toward expanding the program to independent organizations in every major city in Poland.

Janina is using her lessons learned and experience from the success of the Academy Against Cancer to spread and replicate her work with apallic patients. She believes that providing a system of treatment for the awakened stage of patients is the next step to transform the state of medical care given to apallic patients.

Janina emphasizes that nursing is not only about education, but ultimately, it is about believing in the endless possibilities for one’s patients.