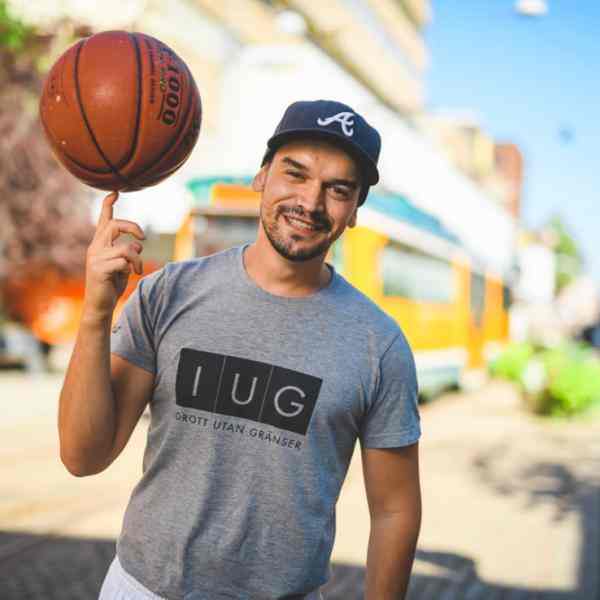 In 2010, Admir founded Idrott Utan Gränser (IUG), which translates to “Sports Without Borders” in English, with a mission to cultivate a generation of young people eager to take necessary risks and responsibility to shape their lives. Admir makes new use out of existing, underutilized spaces - including PE classrooms, playgrounds, and schoolyards during afterschool, weekend, and holiday hours – in order to promote active learning and new relationships across social groups. IUG young leaders facilitate activities in these spaces, thereby attracting youth from diverse backgrounds and ages to engage in unique combinations of sports, play, and hands-on role modeling. IUG young leaders, often from immigrant backgrounds and young in age as well, become a system of support and mentorship for the participants, in particular those from immigrant backgrounds.
Beyond its work directly with youth, Admir and his organization, IUG, use its approach with play and young people as a tool to encourage society at large to function more collaboratively. IUG’s methodology inside and outside of schools creates new interactions between local associations, schools, teachers, universities, governance, the business sector, and law enforcement, in ways previously missing from society. IUG enables diverse groups in Sweden – from the youth it engages all the way to the municipality leadership – to meet and change their views of each other in unexpected ways, unleashing new role models. Consequentially, IUG shifts the current conversation about integration of immigrants in a more positive direction through highlighting the potential of role models from diverse backgrounds.
IUG creates a win-win interactive program by building networks and personal relationships that break down the barriers in society so children and teenagers build positive experiences out of failures and have an opportunity to incubate their own ideas and develop their entrepreneurial skills. Since its inception in 2010, Admir has built IUG into a nationwide movement of thousands of young people, dozens of schools, corporations, and sports clubs, as well as teachers and municipality leadership all contributing and participating in its work with young people in Sweden.

Diverse communities are increasingly segregated from native Swedish society, which can begin as soon as a newcomer arrives. Upon arrival, newcomers receive varying levels of benefits depending on their immigration status. This may include asylum, education, loans, and information about how a person can live and contribute to Swedish society. These are often not the social benefits that solve the full range of social challenges of new immigrants. Moreover, the government pays a high price for these offerings as well as for the increasing number of those who do not excel within rigid social structures, which can overlook individual strengths and potential. Furthermore, existing social work efforts to improve integration for new arrivals– both initiated by the state and civil society – target primarily immigrant areas rather than the neighborhoods where native Swedes live as well. This results in misconceptions about what diversity means – both among the immigrant and native Swedish populations. In fact, more than 40% of children with an immigrant background live in majority immigrant areas. Simultaneously 55% of all children with a Swedish background live in majority native Swedish neighbourhoods. This segregation manifests in the makeup of schools, too. In many schools, students come from only one or several social backgrounds. Native Swedish children, for example, can go through the school system with little contact with those from backgrounds other than their own, and vice versa.
Working with an outdated institutional framework that promotes assimilation and social conformity over diversity, society and schools in particular fail to draw upon the individual strengths and assets of children and teenagers. Moreover, the current national conversation about immigration in Sweden – fruitlessly oriented toward the problems rather than solutions – can easily further the gap between native Swedes and the various groups of new arrivals if not redirected more constructively. Despite the region’s comparatively open-door policies and resources for immigrants, new arrivals and, in particular, young people can struggle for years to pursue their aspirations and find their way as full economic citizens. They can easily become locked into their status quo, struggling to find the steps to shape their own futures. Young people – regardless of background – must build relationships with their peer groups, find their way at school, surmount bullying, build confidence, and identify role models during their school years.
Society as a whole, including schools, the business sector, municipalities, the education system, law enforcement, and local associations, lacks an integrated approach to fostering and developing today’s newly diverse Scandinavian context. Increased flexibility, tools, communication, and role modeling are required to build a generation of young people willing to take important risks and build sustainable relationships.

Born in Bosnia in 1983, Admir experienced war for half of his childhood. This led Admir to lead a life where staying persistent and creative became his most valuable assets. Everything in his life changed when his family was quickly forced to flee Bosnia. They received a letter from a distant relative in Sweden offering them asylum. Soon after, his family moved to the highly segregated area of Landskrona, Sweden, comprised of nearly 95% immigrants. Admir faced trauma upon arrival to Sweden. He was unable to eat for the first few months, he had to sleep with his parents due to all encompassing fear, and he had a remedial teacher at school.
As soon as Admir was old enough to know it, he saw the importance of strong social and emotional qualities. This became particularly true due to living in one of the most segregated areas of Sweden where the Swedish Democrats, or far-right leaning political party, is most prevalent. From an early age, Admir built his dreams based on whom he saw in his neighborhood. He remembers feeling that the options were limited to three: he could become a pizza baker, a social service worker, or a criminal. However, thanks to his father introducing him to sports, Admir was drawn in a positive direction. His father started a basketball club for immigrant young people in Landskrona to keep them off the streets. Admir was involved in the leadership of the organization at just 14 years old, which included coaching the teams. By 18, he was running the organization. It was then that Admir’s grew into his gift for leading and positively influencing people. Despite police escorts to each basketball club’s game (based on unfounded suspicion by Swedish law enforcement), Admir stayed strong as both a leader and a player. He realized that the challenges faced by young people have more to do with the structures of society than the experiences of young people alone.
Through sports and leading the basketball organization, Admir achieved a key personal insight that eventually led him to found IUG. This insight was that sports, among other positive influences such as family, friends and role models, gives a young person the sense that life is a corridor of opportunity. Admir built IUG to transform the mindset of young people who grow up in segregated areas and may not know life is a corridor let alone one of opportunity. Based on his own upbringing in Landskrona, he is driven by building a sustainable and supportive environment for children - both at home and at school. Ultimately he ensures that every person sees opportunities, dares to participate, dares to try, dares to say no when necessary, and is not afraid to fail.
In 2007, Admir began the foundational work of IUG in Norrköping, which evolved from a part-time activity to the organization that it is today. In 2010, he founded IUG as an independent organization. Leading the values promoted by IUG, Admir is not afraid of failure or trying. He deeply connects with young people, much to do with his similar upbringing to many of those a part of IUG. One can find Admir on one day in his basketball gear connecting with children on the sports field. On the next day, Admir is in a suit and tie carrying out meetings with the King of Sweden. This agile flexibility, creativity, and openness are what he inspires as a role model to thousands of youth.