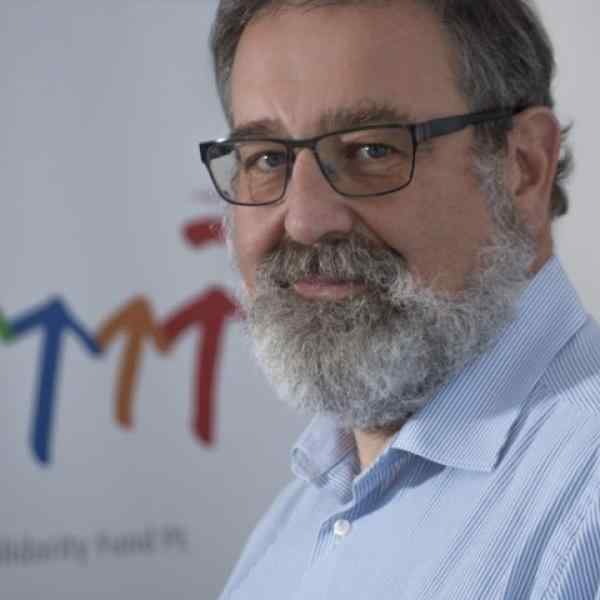 Krzysztof is stimulating the growth of locally-based volunteer groups throughout Central and Eastern Europe and linking them in an expanding network of educators and civic leaders. He believes these networks of committed individuals are critical to restoring the region's wrecked social bonds and to solving pressing local and regional problems. By strengthening cross-national and cross-regional collaboration, these networks further strive to replace rising nationalism and regional prejudice with proactive collaborative efforts in the citizen sector.

Krzysztof believes that strengthening local efforts and facilitating the emergence of NGOs is key to effecting large-scale democratic change in Poland and in neighboring nations. As the success and expansion of his program demonstrates, he is committed to establishing strong community-based groups which share information and strategies for implementing social change. These small groups, comprising volunteer educators and emerging community leaders, collaborate to solve local problems, restore civic awareness and participation, and implement training efforts to bolster basic citizen skills. From its inception in 1989, the program has grown to include over 11,000 participants and now reaches to many regions outside Poland. Through his community-focused efforts, Krzysztof is providing a framework for functional democratic societies by establishing lasting patterns of cross-cultural cooperation and tolerance.

The dissolution of Communism in Central Europe brought with it the expectation that democracy would cure the region's social and economic ills. Instead of facilitating an ultimate cure, however, the collapse of the former political structure generated a host of new problems and challenges for the emerging civil sector. Almost a decade later, democratic systems in many regions remain weak or non-existent, and corruption exists at all levels of government and business.

Since the 1940s, Polish citizens have grown accustomed to government mandates discouraging individual involvement in social activities. This repression of individual-initiated civic involvement resulted in a pervasive apathy toward government, law, and individual impact. Even now, social activism bears the stigma of obligatory, bureaucratic "social actions" common in the previous Communist era. Thus, one challenge unique to formerly Communist nations lies with mobilizing a newly democratic citizen sector, for which the concept of effective and proactive involvement is largely alien.

While the reversal of citizen apathy is critical to advancement in this region, such reversal requires a complete restructuring of the perceived role of the individual in a social framework. Many programs and services have emerged to assist Central Europe's civil sector through the transition from Communism to free market economy. However, most originate in Western contexts and while well-intentioned, are culturally-biased and costly to local economies. In the long term, such programs are neither effective nor economically sustainable for communities already strapped for financial resources.

In entering a region, Krzysztof convenes groups of between 10-15 volunteers, of whom about half are educators by profession. Following the assembly of each group, participants undergo training by established members, and address both specific "how-to" issues as well as broader civic participation concerns. The initial training, which lasts one year, helps participants identify and address pressing issues in the local sphere. They then develop solutions for a range of needs: from the logistics of building a road to the analysis of inexpensively transporting children to school.

Krzysztof's efforts have proven effective across a range of cultural settings throughout Central Europe. While outside programs frequently overlook cultural and linguistic variations within the region, Krzysztof's network relies on volunteers who are sensitive to indigenous languages and local cultural history. Basic training materials are tailored to the needs of the local citizenry and are available in seven languages. Volunteer participants are well-positioned to see what their communities need, and they design and implement social change strategies to deliver concrete results without burdening local economies.

Because participants have a personal investment in the outcome of their work, their impact is often great. Rafat, a Crimean taxi driver, provides an example of Krzysztof's success in stimulating citizens to develop solutions for local needs: After watching his young son battle cancer in relative isolation, Rafat contacted Krzysztof's organization, attended the initial training program, and subsequently established a children's cancer support group to help his son and other children with cancer. Previously uninvolved in civic participation, Rafat now devotes many hours of volunteer time as a trainer in the network, and is involved in facilitating an expansion to the difficult region of Uzbekistan.

As an integral component of training, participants hone concrete skills to enable them to lead workshops for future participants, thus increasing the network's reach and cross-regional impact. In 1995-96, Krzysztof launched a pilot expansion outside Poland's borders. Initially, he established strategic hubs throughout the region, each staffed by well-trained multicultural volunteer expansion teams. More recent expansions to Muslim regions have required sensitivity to religious orientation, and in these areas, Krzysztof has been careful to assemble trainers who are familiar with Islamic cultural and religious heritage. In all regions, Krzysztof attempts to dissolve gender stereotypes by insuring that women are represented in every training team.

Since Krzysztof initiated the program in 1989, it has attracted over 11,000 participants, of whom 3,600 were trained in 1998. With assistance from his volunteer staff, Krzysztof has organized five-hundred fifty workshops in Poland, Ukraine, Belarus, Crimea, Kazakstan, Kyrgyzstan, Uzbekistan, Azerbaijan, Mongolia, Latvia, and Lithuania. In Belarus, Krzysztof's program has stimulated unparalleled growth in the third sector, and has directly contributed to the emergence of over 100 NGOs in 1998 alone. By 2005, he plans to extend his network to include parts of Russia, and by 2010, he hopes to introduce the program in China.

While the program has been largely self-sustaining, Krzysztof sees an increasing demand for additional financial support to provide travel expenses for trainers, as well as cover minimal overhead costs. He has secured some funding from the National Endowment for Democracy and the local Soros agency in Uzbekistan. While these and other outside funding sources are clearly valuable, Krzysztof is developing local sources to cover maintenance costs and fund future expansions. He plans to develop a "Democracy Fund," which would encourage monetary contributions from citizens of emerging democracies throughout Central Europe.

Krzysztof's introduction to activism was largely furnished by his parents, both of whom demonstrated commitment to social change in their respective fields. A prominent dissident in Communist-era Poland, Krzysztof's father was imprisoned for seven years for promoting democratic ideology. Following his release, he was elected to the Polish Senate, where he currently serves.

Krzysztof developed an early interest in his local scouting chapter, and at age fourteen, demonstrated leadership and initiative in assembling a scouting group to assist deaf children. Yet as politics became the focus of his work, he was increasingly subjected to government scrutiny. His affiliation with the political union organization Solidarity resulted in a two-year prison sentence in the mid-1980s. In 1992, after launching an initial program in Poland's under-privileged Suwalki region, Krzysztof served as a consultant to the Ukraine as part of a training effort sponsored by the U.S. National Republican Institute. The trip proved pivotal in shifting Krzysztof's focus to large-scale, cross-regional reform. Krzysztof now collaborates with Ashoka Fellows Alicja Derkowska and Wojtek Onyszkiewicz in establishing community-based cooperatives throughout Poland.