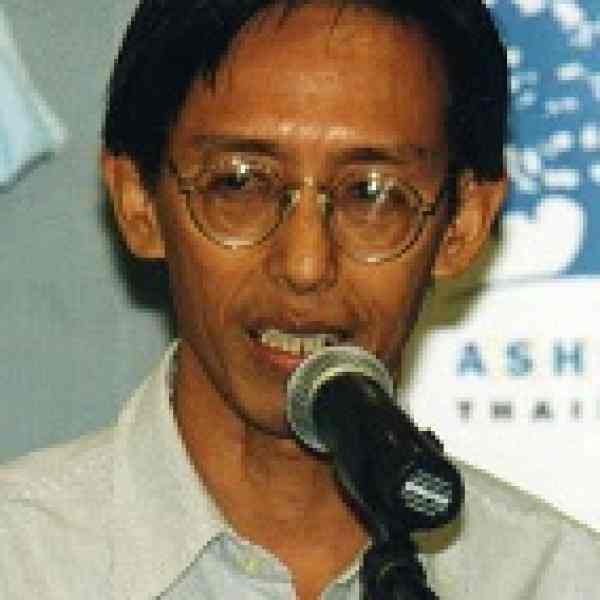 Wallop Tangkananuruk, "Khru Yui", is demonstrating how to rescue Thailand's most endangered children.

The increasing numbers of deeply troubled children, many surviving on the streets, is a growing problem in urban and rural Thai society. It is one of the negative impacts of rapid urbanization, breakneck economic growth, and the increasing pressures on the "have nots" in the culture to survive many changes which are out of the control. Khru Yui has identified the casualties of this process, the children who have been abused, abandoned, orphaned, or literally thrown away, as the focus of his life's work. He has designed a range of creative programs to address the immediate needs of these disenfranchised, hurt children. He has established a home for battered, raped and abandoned children. He has founded a home for runaways in transition. He has a shelter home for children involved in legal disputes. He started a temporary school around construction workers' housing for the 150 children of the workers. He also launched a "mobile education car" which circulates among six areas with construction worker's housing and gives tutoring to the children at nighttime. He has "sidewalk teachers" reaching out and providing counselling to street children in 12 areas of Bangkok. He has developed a mode residence next to a rural Buddhist wat for homeless rural youngsters, drawing the monks and through them the broader village society into his work. In each of these programs the underlying organizing strategy is the same. Treat the children with respect. Build a trusting relationship with them. Offer them some hope for a better life than the one on the streets. Provide them with a supervised, safe environment from which they can struggle to regain some sort of normal life. Each of the institutions Khru Yui has established is a demonstration of how Thai society, applying these basic principals, could, effectively and economically, reach out to and help these young people. His task now is to help his society understand both the challenge confronting it and these practical ways of responding. He's launching a major awareness-building program both for the general public and for those with deeper involvement, but as volunteers or as policy-makers. He tries to expose those with a substantial interest directly to the children early on through a series of novel on-site programs. He's also trying to build up a network of governmental and non-governmental organizations to work together towards policy changes. Khru Yui is also a pioneer among Thai citizen social change organizations in terms of building a broad base of individual and small group financial and volunteer support. Having successfully demonstrated how to do this for his own organization, he's beginning to help several others including his Ashoka colleague Teunjai Deetes learn his techniqes.

Thailand has not been immune to the problems associated with the breakdown of the family unit. Increased numbers of broken homes, battered and abused wives and children, increases in drug and alcohol abuse, and the pressures caused by long-term unemployment all wreak havoc on healthy family life. Sometimes the sanest response for a child in this environment is to run away from home. But of course, running away only leads to a series of more serious and potentially dangerous problems.

While living on the streets, the children often do not have enough food to eat, they have no responsible adult supervision and they have no one to take care of them if they become sick. Many fall victim to an older street population engaged in criminal activities. These adults teach and sometimes force the children to rob and steal.

Many of the children become chemically addicted. To escape their pain and hunger, many abuse paint thinner, lacquer, and glues. Once addicted, their situation becomes all the more desperate.

The children may be forced into prostitution by pimps. This closes many doors, causes great psychological damage, and is now life threatening because of the deadly and fast-spreading AIDS virus.

Street children literally have no shelter of their own. They are subject to arrest by police because they have no "place" to go. If arrested, they have no one to bail them out. The public has turned its back on this problem, which seems too unwieldy to get control over. Many believe the children are causing the problem, when really they are the victims of a much greater social breakdown.

Thai society does not know how to deal with this burgeoning problem. Fearing and resenting these children, as so many storekeepers and often adults do only aggravates the problem. Chasing and punishing or incarcerating them, as so many public officials do, is even worse. Khru Yui consequently has two educational tasks before him, not one - to explain the harm done by such punitive approaches as well as to persuade society to take up his constructive alternatives.

Although Khru Yui must continue to administer and learn from his six mode programs, his chief task for the coming several years will be getting others to understand what he has learned and to take up on a large scale what he is demonstrating on a small pilot basis. Here he's got three broad audiences - the general public, professionals and volunteers working in the field, and policy-makers.

He has developed a number of ways of reaching out to the general public. First, he provides a highly responsive, reliable support service for the press - feeding them story opportunities and being available as a source of background information and explanation. Second, he publishes and provides a wide range of explanatory materials, including two books he has written. Third, his organization scrupulously responds to every request for information it gets from the public. Finally, it systematically asks citizens to contribute, either financially and/or by volunteering, keeping in close touch with everyone who does.

Khru Yui has designed ways for interested citizens and volunteers to have direct first hand experiences witnessing the problem. He organizes nighttime "urban probes" on a weekly basis to introduce people to real street children and gives them a change to see and to learn about their living conditions. This program has helped him recruit large numbers of volunteers into his extensive direct action programs.

Khru Yui is also active at the policy-making level. He serves on a wide range of blue-ribbon committees charged with he task of developing government policy to address the alarming problem of street children.

Khru Yui was influenced as a young boy by his father who worked as a social worker, giving aid and comfort to people in difficult living situations. His interest in working in the city slums began when he was a university student. After graduation form the Faculty of Education, Chulalongkorn University, he spent a lot of time living with poor and ill-treated children.

For three years he taught in a special school outside Bangkok for troubled children run on culturally-adapted Summerhill Lives by the Foundation for Children. He then returned to the city and began the experiments that eventually led to his six demonstrations of model approaches. In 1986 he and his colleagues set up the Foundation of Better Life of Children (Dand Sund De Foundation) to manage what was beginning to be a substantial, wide-ranging program.