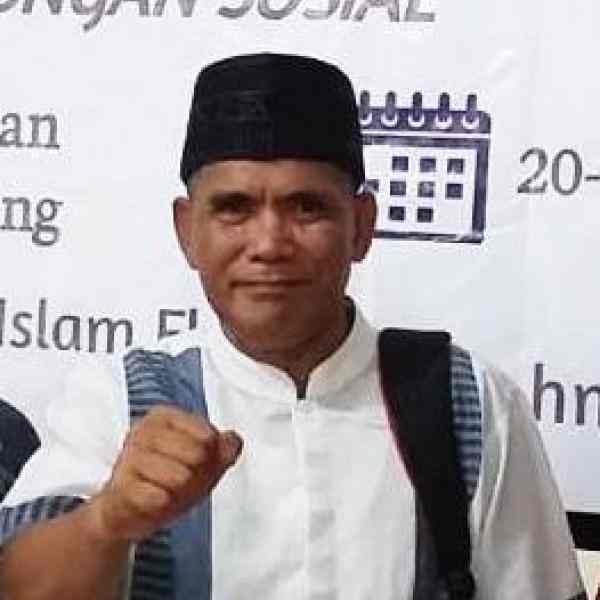 Umar Husein, a socially involved student leader since his village boyhood sixty kilometers outside Palembang, South Sumatera, is demonstrating new ways of organizing college students to work with street vendors and other poor Indonesians. His approach serves the economic needs of the students as well as those of the street vendors.

Umar Husein is setting out to help universities learn new approaches to get their students to participate more actively in community work, commit enough time to make a difference, learn as much as possible from the experience, and leave a real mark on the communities they serve.To establish a solid groundwork and a model that works, he is launching a community development program that puts together university students, school-leavers, and the lowest income groups (one example is women vegetable vendors). The program benefits both. The groups improve their socio-economic condition and students and school-leavers learn how to organize and work with the groups as well as how to develop their own businesses. By weaving these two components together, Umar harnesses the students' and school leavers' need to earn a better income as well as their desire to contribute socially.

Indonesia's development programs have not channeled much of their benefits to those on the lower rungs of society. In Java, the landless bottom forty percent have seen little real increase in their incomes over the last two decades of rapid economic growth. In South Sumatera, the oil and timber industries have disrupted disproportionately the environmental commons on which the poor depend while providing few jobs for which they or the urban poor can compete. The unskilled urban poor have regularly been undercut in the job market by better skilled outsiders and the steady influx of rural refugees.The poor consequently crowd into the largely ignored and under-developed informal sector. These tiny units don't have the capacity to plan, research, seek policy or legal changes, to organize infrastructure or even marketing. They are therefore weak and vulnerable. They can't get affordable credit. They can't negotiate from a position of market power. They're chronically vulnerable to better-financed, better-connected rivals who obtain the best locations, supplies, and prices. The weak end up selling vegetable on a piece of old newspaper under a bridge.Indonesia, like a good many of its Asian neighbors, has created programs intended to get its college students to look beyond their books and privilege to help and be sensitized to their society's poor. Undergraduates are required to devote three months to such field work and must pay a 300,000 rupiah ($175.00,) fee towards the costs.However, this program, as it has been in most other countries, has been a disappointment. The overall educational program, modeled on Western prototypes, is designed to train people for the new industrial/professional economy -- leaving the small community service program a largely unconnected appendage. The program can't expect real support from professors who have opted for a life of ideas, not action. It is too short and too expensive. It has often become primarily a recreational activity. And the universities, seem to have neither the will nor the ability to learn from these mistakes let alone to conceive and think through alternative approaches.

Umar proposes to introduce a new actor into this wasted opportunity, an action-focused private voluntary organization. Through its intervention he plans to demonstrate a new, far more realistic and effective way of engaging students in community service while also truly helping those working in the informal sector.The key to the success of his approach lies in its realistic grasp of the needs of all the actors. As a boy he helped his mother, a trader, who had once wanted him to follow her into trading. He also knows what it's like to be a poor student who must work to survive.Umar starts by carefully selecting drop-outs and students from a number of universities, especially private campuses, in South Sumatera. He's looking for students with financial need and serious character and social concern who are likely to give sufficient time to the work. For example, he'll go after graduate students with their theses in front of them.He'll give the students he selects special training and, after further winnowing, what amounts to a business opportunity to work in small teams with groups of market vendors or other clusters of informed sector workers. Not only does his program have no fee, but he'll orchestrate critical financing for the businesses.Umar expects this intensive, group-to-group, self interest as well as altruism-based intervention to lead to a number of ambitious improvements in the microbusinesses involved -- ranging from legalization through product and packaging improvements to new locations and selling arrangements.He hopes that, as his program succeeds, it will become a model for university social service programs. He's especially hopeful of influencing private campuses that are still trying to figure out how best to design such programs.He'll then work to spread success from one campus to another, notably through the Islamic Students' Association of which he has long been an officer and through his writing for the press. One major paper has already agreed to do a series of articles based on his work.

Umar grew up in a village of 3000, chiefly artisans, in rural South Sumatera. His father was a carpenter, his mother a trader. His leadership qualities emerged very quickly. As an undergraduate, he continued to provide leadership for his home area, catalyzing the creation of a high school near his home. He also created a group of collegemates who, on their own, went to the villages to teach. The sensitivity he brings to his current work vis a vis both the poor people he hopes to help and the types of students and drop-outs he seeks to recruit reflect both his personal experiences and this early organizing success.On his campus he became a leader in the Islamic Students' Association, and, after graduating, he continued as an elected leader across the region, for the last four years as its head. This experience gave him broad exposure to the region's needs, universities, and private voluntary organizations.