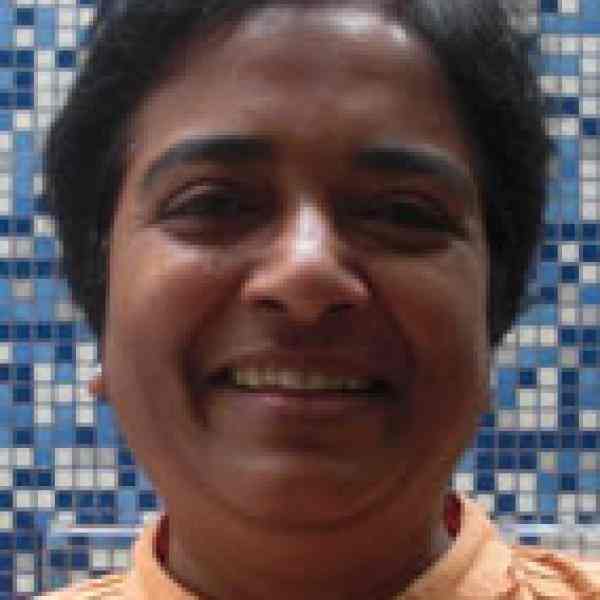 Sunanda Mane is bridging the gap between education imparted in secondary schools and real-life skills required in rural India. By introducing trained local entrepreneurs into schools, Sunanda creates an environment where students are able to develop entrepreneurial skills. As a result of her work in over sixty government-aided schools in rural Maharashtra over the last four years, absenteeism and dropout rates have significantly decreased.

Sunanda’s vision is to foster rural development by empowering rural youth to develop life skills and create local opportunities. To achieve this, she leverages local resources to contextualize education imparted to the rural environment and spur entrepreneurship in high schools.

Sunanda believes that experiential learning during a person’s formative years plays an important role in inspiring and nurturing entrepreneurial skills. Specifically in the rural context, she sees such skills as critical factors to enable youth to create their own opportunities. By targeting high school students between the ages of 14 and 17, she enables them to explore potential careers and livelihood options that address their interests and aptitudes.

While working to develop entrepreneurial skills and qualities in students, Sunanda seeks to ensure that young people remain locally connected. Toward this end, she trains local micro-entrepreneurs to act as role models and become instructors in schools to train students. This helps students remain engaged in a variety of local opportunities, such as basic engineering, agriculture, animal husbandry, health, and energy. In return, apart from monetary incentives, these micro-entrepreneurs are trained to use the latest technology while availing opportunities to undertake additional work orders from the community and access networks to help expand their businesses.

Sunanda has convinced over sixty government-aided schools in rural India to adopt her program by aligning her strategy with their interests and has obtained formal recognition from the Government of Maharashtra. As a result, the program appears as part of the transcript of a high school certificate; a full-credit course that has been recommended by the state government to be implemented across the state.

Migration from rural to urban India is taking place on an unprecedented scale due to a lack of quality education and livelihood opportunities. As a result, there is growing income, infrastructure, access to education, health, and information disparity between the urban and rural populations.

The significant disconnect between the education imparted and livelihood skills needed in rural India is a major contributor toward the migration to urban areas. Most teachers follow the rote method of learning which results in a lack of both comprehension and active engagement of the students. Further, educational curricula focus more on the needs of the urban population. Knowledge and skill sets relevant to the daily lives of the rural population are not addressed in the educational curricula.

Facing the absence of adequate opportunities to find gainful employment locally, many also discover that they do not have the skill sets or confidence to set up their own ventures. This results in waves of unskilled workers moving to urban areas in search of work. Over time, this has also resulted in rural youth feeling increasingly disconnected from the local environment. They aspire for the variety and quality of educational and livelihood opportunities available in urban India, which results in a drain of local resources.

While several governmental and non-governmental organizations are providing vocational training to youth, the scope and reach of their programs has been limited to providing training in a single trade over a short period of time, without aiming to develop scientific temperament and problem-solving abilities among youth. Moreover, most organizations focus on building skills toward being job applicants, not job creators. Furthermore, existing initiatives target students after they graduate from high school, which results in youth making skills choices without any background or knowledge in the area. Finally, most such training centers operate outside of schools or universities which implies limited access to the community. The programs have also been unable to scale in rural areas due to costs incurred in setting up independent centers and staffing them with adequate instructors.

Having grown up in a village in Maharashtra, and after working at an educational institution, Sunanda realized the limitations of existing approaches to education in rural India. Her experiences convinced her that she had to focus on enabling formative students to gain multi-occupational and applicable life skills rather than vocational skills. Sunanda saw existing schools as ideal spaces to implement this idea.

Approximately 30 percent of the secondary schools in India are government-aided schools and many are located in rural India. To elicit their cooperation, Sunanda designed the program to integrate with, and complement, their existing curricula. Through her organization, Lend-A-Hand India (LAHI), she works with the school to alter the timetable for the week and dedicate a full day, each week, to the program. Sunanda receives the commitment of the school management, both in terms of time and finance, by shifting the primary responsibility for the launch and implementation of the program to the school.

Instead of recruiting instructors from outside the village, LAHI works with school management to identify and train instructors from within the community; typically local micro-entrepreneurs in the selected fields. LAHI also trains the local entrepreneurs to enhance their skills and capabilities in their respective fields by providing access to the latest technology and other skill-building programs. Apart from monetary incentives, micro-entrepreneurs also have the opportunity to undertake additional work orders received from the community, appear for open school diploma examinations, and access networks to expand their businesses.

Through the program, students’ achieve experiential learning through apprenticeships and by serving the needs of their community. Over the course of three years, students get the opportunity to work and reinforce their understanding of over twenty-five activities, including learning to test their blood, fabrication, repairing equipment, and growing produce under the guidance of instructors. Emphasis is made on working in teams, developing a scientific temperament and critical thinking. Students also acquire practical business skills such as timeliness, calculating costs, marketing and selling their products locally, and ascertaining profits. LAHI maintains a gender-neutral approach in imparting education. By doing so, it has empowered girls with skills such as electrical wiring, fabrication, and carpentry.

At the end of three years students have the chance to launch their enterprises. In a recent survey conducted on 1,200 recently graduated students, LAHI found that over 20 percent of students stated they would like to start their own venture after they completed their studies. Seeing a higher percentage of students opt for technical and science education, Sunanda worked with the state government to provide reservations in ITI and polytechnic colleges in the region for student graduates from her program.

Schools have become direct beneficiaries of Sunanda’s program. Due to these initiatives and active participation of the local community, schools have transformed into enterprises—spaces where work orders are carried out, flowers and produce are sold, and the revenue generated through these activities goes back to the school.

Sunanda has addressed the issue of scaling by following an approach that leverages local resources and infrastructure. By handing overall control of the program to the schools and communities, Sunanda is able to monitor the progress of the program and expand her work to other schools. She has partnered with local newspapers to cover monthly stories on the program. This coverage not only motivates schools to effectively implement the program but also monitors the school’s progress. Parents are becoming increasingly involved with school the activities and have started to demand quality education for their children. Schools are also committed to continuing the program, as absenteeism and dropout rates have significantly decreased due to the program. (Government-aided schools are required to maintain a certain level of enrollment and attendance to receive continued support.)

Sunanda reaches approximately 8,000 students in Maharashtra. She recently expanded her work to six schools in the states of Karnataka and Goa. Sunanda intends to spread her work across India through strategic partnerships with other organizations and the government. She has also begun a campaign to convince the Central Government to support and adopt her program under a scheme launched to improve secondary education in India.

Sunanda grew up in a small village in Maharashtra, India, in a family of educational and community service providers. She remembers being heavily influenced by the work of her grandfather, an education officer, who implemented adult education programs around her village; and her mother, who managed a local library.

Sunanda moved to Pune at the age of 17 for a college education, as such opportunities were sparse in her village. The eldest of five siblings, Sunanda resolved to support herself and her education—a rare reality for young women in India. She started by working in an engineering workshop. While she pursued her education, she assisted the University of Pune in redesigning the business management course to adapt to a changed environment, and to formulate a course for the then recently privatized insurance sector. This provided Sunanda with valuable insight into the significant disconnect between the educational curricula and the bureaucracy in educational institutions.

Later, Sunanda joined CARE India as the State Representative from Maharashtra to reestablish CARE’s presence in her home state. Despite CARE’s background, she decided to orient its work toward rural development by creating collaborations between corporations and government authorities to address common concerns. For instance, she saw an opportunity in Enron’s imbroglio to launch initiatives in rural development in the impacted region. Despite severe criticism, Sunanda convinced Enron to invest in some of the most urgent issues in the region such as environmental pollution and education to create lasting solutions by partnering with local governments. Sunanda’s experiences provided her with a deeper understanding of the issues surrounding rural India and developed her skills toward creating partnerships, particularly with the government.

In 2000 Sunanda moved to New York to join her husband and pursue her master’s degree in International and Public Affairs at Columbia University. During this time, she realized she had developed her own perspectives and convictions about approaches to address challenges and bring change. Sunanda saw the lack of opportunities at the root of most social problems. In 2003, the Government of India had launched several schemes to address the quality of primary education in India. Sunanda saw this as an opportunity to target secondary education—the crucial stage to prepare students for higher education and the work world. Cognizant that it was only through the assistance of others that she escaped the fate of many rural Indian children, she set up LAHI in 2004 to focus on rural communities.