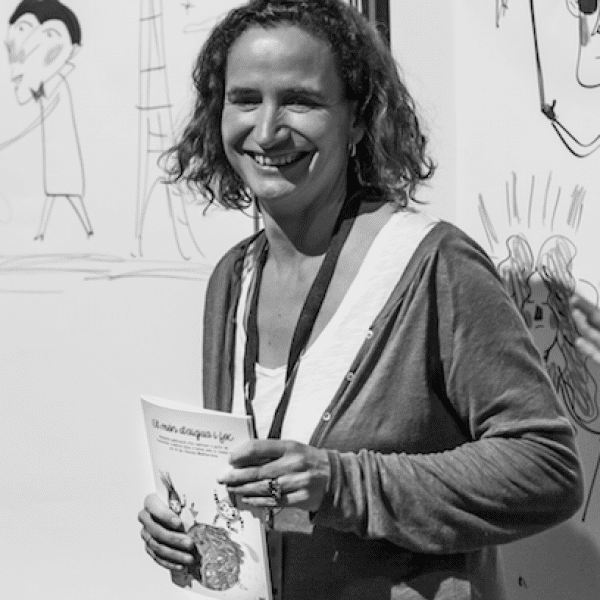 Roser has designed an innovative learning process that transforms the way the essential skill of writing is taught in primary schools, inspiring measurable higher performance, increased self-esteem and improved attitude for both students and teachers. Her transformative and scalable methodology inspires creativity through visual thinking, storytelling and drawing, not only helping students dramatically improve their academic and personal performance but also empowering teachers to lead an autonomous and creative teaching process across all subjects.

Roser’s approach inverts the traditional order in which writing is taught, empowering children to use their imagination to create a story where the image is the basis of the learning process of writing. Through drawing, students learn to think and to express themselves confidently, creatively and cooperatively. Simultaneously, it provides teachers with tools to guide children through the process, boost motivation and design creatives teaching mechanisms.

This new methodology significantly improves primary school children’s writing skills, combining the ancient art of storytelling, the modern element of an image-driven society and the building blocks of the traditional writing process to stimulate students’ motivation and improve their results.

Roser has gathered a multidisciplinary team of writers, illustrators and linguists to design a model that empathizes with the child, and recreates the writing process through a visual prism. The crucial idea behind the methodology is to respect the student’s creative process, with as little adult intervention as possible. Taking the story the child wants to tell as the starting point, the methodology gives each student tools, such as games and exercises filled with visual narration, to help them gradually produce quality texts. The child is the protagonist and lives the creative process in first person from the inception of his or her story to the completion of a short book – his or her very first publication.

Roser founded Vox Prima to transform the quality and relevance of primary education, and her priority is to ensure that the project has a social context, available to all children regardless of socioeconomic context and learning skills. For this, the project was first implemented in highly complex public schools in neighborhoods with families in vulnerable situations and poor academic results. Working with images eliminates a number of barriers – multilinguism, dyslexia, children with learning difficulties – and enables every child to share ideas through drawing, writing or speaking, resulting in increased confidence and feeling of success.

This imaginative learning model is transforming the schools’ learning system, as it influences the teaching staff across subjects, who have gained confidence through Roser’s methodology based on creativity, and are motivated to apply it in other areas and contribute to improve overall academic performance.

To date, Roser and her team have worked with nearly 4,000 students, 300 teachers and 22 different schools. Together they have systematized the methodology and created an on-line platform allowing for immediate growth and scalability. The pictograph methodology can be applied in any educational center – including and especially in low income areas - and actively contributes to transformational change within the school.

Vox Prima was founded in 2011 with two fundamental goals: Firstly, to improve primary school children’s writing and creativity skills through a successful experience that enables them to boost their self-confidence and embrace learning as pleasurable and rewarding; and secondly, to act as a stimulus for teachers and schools, in any context, by providing new teaching approaches.

To reach these goals, Roser has created an exhaustive methodology in which schools are guided and accompanied to improve their teachers’ resources and motivation, and as a result boost their students’ confidence. Vox Prima doesn’t only offer a learning process, it converts the school in its own editorial content creator, where students are the published writers, and the teachers their editors.

Roser has developed both in-person and online resources to guide the school through the process, and the model includes five phases:

1) Pre-evaluation and training: Once the school has decided to implement Vox Prima, Roser and her team visit the school’s leadership group to give a detailed explanation of the model. This ensures that the school fully understands the process and commits to a full-scale implementation.

2) Student evaluation: when the course begins every child plays a series of games on the Vox Prima online platform. This gives the teacher an idea of each student’s writing skills, allowing them to respect their learning pace.

3) Collective creation process: In group, the teacher encourages the children to imagine characters from the story they are going to build collectively. (In some cases, an illustrator is invited to class to draw these characters, or teachers can use the image bank provided by the platform instead). Children will be imagining the personalities and roles of each character and together they decide the beginning of their story. Beyond an academic exercise, this is often an emotional process where children get very involved, expressing their feelings, strengths and insecurities through their characters.

4) Story introduction: with the children’s collective input, the teacher writes the introduction of the story and uploads it to the online platform, where a professional publisher, provided by Vox Prima, gives constructive feedback, strengthening the training process for the teacher.

5) Individual production of the book: Once edited, each child is given the beginning of the story, so that they can build on it individually. At this point, the child draws the events of his or her story (the “pictomap”), and from there, starts writing the text, knowing in advance what he or she wants to express. Once the story is finished, each child lays out and prints his or her own book. Once the process is finished, the school will have published a series of books, written both collectively and individually by the students.

VoxPrima offers two different implementation paths for the introductory phase (the first year): the onsite path, designed for schools who are looking to implement a profound change in their educational model, using the methodology throughout the entire system. This includes an extensive teacher training across all subjects – with professionals from a variety of backgrounds including writers and illustrators - encouraging them to increase their creativity in class and re-think traditional teaching methods.

The online path was thought for educational centers where change has already started, by implementing Vox Prima or other initiatives, and the leadership team considers that the methodology can be implemented without direct training or supervision. This consists of online training modules, evaluation methods and practical tools to design the publications or report on the results.

In both cases, the school eventually works independently, and is given access to the Vox Prima’s support package and on-line platform.

Vox Prima is a social enterprise, and its economic sustainability relies on an affordable subscription model, approximately the same cost of a regular textbook.

The impact of Roser’s methodology was formally evaluated over two academic years (2013-2014 and 2014-2015), measuring the quality of written texts and presentations of students in 3rd, 4th and 5th grade in six different schools in Barcelona. The results were compared with the evolution of students in a control school, using conventional teaching methods.

The academic study, supervised by the University of Barcelona, was based on four key parameters – Textual Productivity, Textual Structure, Reading Comprehension and Teacher Motivation. The results were extremely positive in the schools applying Vox Prima, surpassing by far the control school: Children produced texts twice as long, three times more complicated in terms of structure and their reading comprehension was six times better.

This data demonstrates the transformative quality of Vox Prima´s methodology and highlights the long-term benefits of the pictograph approach: being able to structure texts better directly correlates to improved learning abilities while improved writing skills has a substantial impact on reading comprehension, and most importantly, increased self-esteem.

Just as significant is the impact the project has on teachers, with over 90% declaring that they felt more confident and more optimistic about their students’ ability after implementing the methodology. As a result, teachers are more adept at seeing the creative side of their students, open to broader evaluation methods, and flexible and willing to replicate the essence of the methodology in other areas, including and especially STEM subjects

Roser and her team are currently working hand in hand with the Managing Director for Primary Education in Catalonia to co-create a training initiative which will allow the scaling of Vox Prima’s model to teachers and students in over 1,700 state schools. She is looking towards expansion in Latin America, and is in advanced conversation with potential scaling partners (such as UpSocial, who is currently working with Ashoka Fellow’s Jump Math to scale in Europe) to expand VoxPrima beyond Spain.

Roser Ballesteros grew up surrounded by artists: her mother had a Modern Art Gallery in Barcelona and paintings and sculptures constantly passed through her living room on their way to exhibitions around the country.

Aged 17 she decided to move to Germany to study Art History at Cologne University. During her studies, she understood that her vocation was not in art, but in a sector that would allow her to work with others. She returned to and moved to Madrid to study Political Science.

Roser married and had three children (Diego, Carla and Sofia) to whom she would read her own stories every evening. Diego was diagnosed with dyslexia and during his first seven years of formal education, Roser spent extensive time researching and implementing different strategies to help him improve his writing and reading skills. The traditional approach in his school was of no use for children like Diego, who did not fit in the verbal-logic intelligence type, for which most classrooms are designed. This experience was a turning point for Roser, who spent an incredible amount of time with her son, reading out loud to him (instead of forcing him to read or memorize), and finding new ways for him to study using drawings, colors and texts.

When Sofia, her second child was born in 2003, Roser decided to quit her job in an insurance company and to reorient her career towards her vocation – literature. She worked for several years as a freelance junior editor for the Salamandra Publishing House and eventually joined them as their PR & Press Officer. During this time, she came into close contact with the editorial world and many professional writers.

Her last job before launching Vox Prima was Head of the Communication Department and Director of Belloch Editions, part of the Santa & Cole publishing group. The job was fun, and the work environment fantastic, allowing her to lead new initiatives and projects, and showing her skills as an intrapreneur. But her entrepreneurial drive was too strong for Roser to stay in the company; she was determined to improve the lives of children like Diego, and she knew she could do so by bringing together her three passions: children, literature and art.

After coming across Ken Robinson’s TED Talk and reading his many books on education, Roser decided again to quit her job to set up Vox Prima. Thanks to her son, Roser knew what it was like to go through the education system when one´s learning pattern is non-verbal and she wanted to provide alternative solutions. After travelling and carrying out extensive research, the idea came to life – creativity had to be brought into the literacy process for young children, not as a one-off workshop, but as a fully transforming method. And so, in 2011 Vox Prima was born.