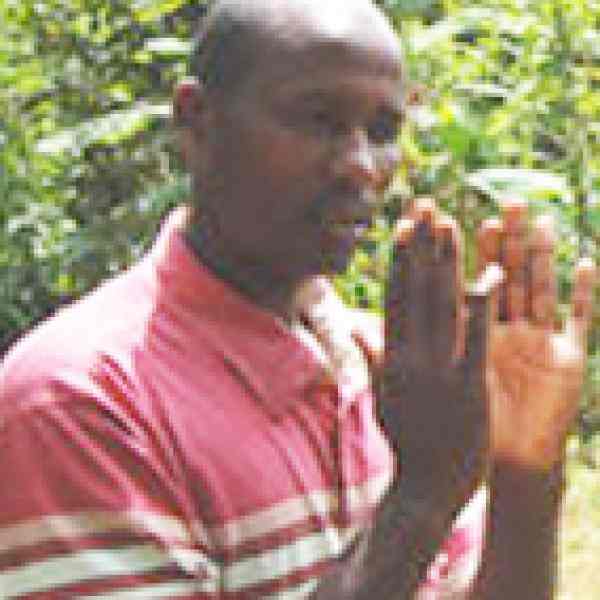 Ndiga Nyaga has developed an initiative that brings electricity to underserved rural populations in Kenya. By empowering communities to come together and invest in the construction and operation of local hydroelectric power plants and distribution networks, Nyaga is helping increase the quality of life as well as productivity of individuals living in rural areas.

Nyaga organizes rural communities to generate their own hydroelectricity and, in exchange for local ownership, relies heavily on rural-based natural, financial, and human resources. This rural electrification project is turning a shortage of energy into an opportunity for rural communities in Kenya to build and control their own high value assets to create new sources of income to supplement their earnings.

Many rural areas in Kenya that are off the electrical grid have significant hydroelectric potential from the many surrounding rivers. As a result, Nyaga’s innovation is incredibly relevant to countless communities, allowing them to build a plant and use turbines made in Nairobi, which are financed by the locals’ investments. The introduction of electricity to rural areas has lasting economic, health, and communication benefits and, on account of Nyaga’s model in which locals own the majority of shares, profits are reinvested into the local community.

Nyaga also runs an educational program that enlightens rural farmers on the benefits of electricity, leads a training program that enables young people to operate and maintain the hydroelectric facilities and distribution network, and manages an umbrella organization that reinvests profits into projects that promise to spread his innovation throughout the region.

The majority of people in rural areas of East Africa do not have access to electricity. In Kenya, as few as 3 percent of rural households are connected to the national grid. Unfortunately, government sponsored electrification programs have not yet reached those areas in most need, and there is little likelihood of their doing so in the next several years. In the absence of electrical power, rural Kenyans face a host of challenges, such as serious health problems resulting from the use of paraffin or kerosene for indoor lighting, and the burning of charcoal or wood for cooking.

Economically speaking, the productivity of small communities is dramatically affected to the point where even small equipment like sewing machines, power tools, and appliances cannot function, and people are forced to spend much of their cash income on fuels for lighting and cooking and the charging of batteries. In addition, communication is severely impaired, as computers are not available and cell phone chargers are in short supply.

As rural communities struggle in the face of these challenges, Nyaga is concerned that the livelihoods on which rural Kenyans depend are not sufficient to guarantee their survival in a rapidly changing world. Most rural parts of the region are populated by smallholder farmers with agricultural outputs that barely support themselves. Despite the fact that 90 percent of food consumed in Kenya is produced by domestic smallholder farmers, families forced to choose among basic needs, and are often denied access to education, health, and housing. In light of these conditions, young people are leaving their rural homes at an alarming rate for urban centers where electricity is readily available.

After studying electrical and civil engineering in Nairobi, Nyaga returned to his rural community in the mid 1990s and was confronted with prohibitively high costs to connect rural homes to the national grid. In 1998, he organized community members and proposed a group financing plan to the KPLC, in which members would pay for the distribution system (including poles, transformers, and wires) by installments, and pay monthly when electricity reached their homes. Unfortunately, the KPLC denied his request.

Inspired by a hydro-powered grinding stone at the flour mill near his childhood home, Nyaga’s solution was to capitalize on the hydroelectric power around him. From that point on, Nyaga was determined to build microhydros; small electricity generation stations that harness the power of falling water diverted from an upstream source and dropped 20 to 30 meters into a turbine to produce modest amounts of electrical power.

To support his project, Nyaga organized committed community members to form a local committee, donate labor, and register as a community based organization (CBO) with the Ministry of Social Services. Through these organizations, Nyaga planned to create an affordable decentralized microhydro mini-grid system largely financed, constructed, operated, and owned by the local community. In 1998, he had already begun work with one community group of 500 interested parties. After a couple years, the station to house the turbine was completed, but the local people were skeptical of schemes demanding up front payment for things like electricity, fearful of their money being pocketed. As a result, community members were hesitant to contribute to the cost of the turbine and distribution network.

It was then that Nyaga developed an innovative approach to engaging the community in financing and maintaining their own microhydro projects. He begins by educating rural farmers on electricity’s benefits for their livelihoods, promoting electricity as an opportunity to own assets that will provide new sources of income. He encourages each group member to contribute to a fund that will be used to construct a generation facility and distribution network. Since the farmers themselves own part of the company, they provide labor and materials for the initial construction of the facility, and as money comes in, the distribution network is installed, allowing shareholders to see their money put to immediate use.

By 2002, Nyaga had begun working with six communities, all of which were in the initial stages of the project, either constructing the facility to house the turbine, or preparing to do so. It was at this time that he had the good fortune of meeting Robert Mustears, who became his partner in founding Green Power, the citizen organization that currently coordinates the work of the CBOs. With Robert, Nyaga successfully reached out to many foreign funders, chose to use turbines manufactured in Kenya, and form partnerships with already established East African facilities.

Currently, Green Power uses grant and donor funds to subsidize the cost of turbines and to buy and hold 30 percent of the shares in each power plant. When profits are paid to shareholders, Green Power uses its portion to cover operational expenses and spread to new communities. A Social Investment Board made up of two representatives from each CBO committee can also decide how portions of the profits are managed.

To date, one plant is operational and serves nearly 200 households, and another will come online in 2008, providing power to an estimated 800 families. Ten plants are currently in construction, and five will come online in the next two years. As these plants come “on stream” and shareholders as well as new subscribers begin to reap the benefits of in-house electricity, the impact will spread.

Green Power has already attracted international attention by providing affordable, environmentally friendly energy owned by the community and co-managed by a CO intent on spreading its promise throughout the region. The Rwandan Ambassador to Kenya, public officials from Sudan and Somalia, and the Minister of Energy from Uganda have visited the site and the German foreign aid agency GTZ, the Finnish Embassy, the French Embassy, Light Africa of Uganda, and the Liberty Foundation Bank of the Netherlands have also expressed interest in partnering or funding the project.

Nyaga was born in a village by the Nyamindi River without electricity, and since he was young, he has been captivated by the power of water. When he was sent to fetch water from the river as a child, he built small dams with mud and stones, and mini-turbines with oranges and sticks. Young Nyaga was also fascinated with electricity, garnering him the nickname Stima, Kiswahili for electricity, and the reputation of being able to fix anything electrical. Once, amid a shower of sparks, Nyaga restored the power in his secondary school by opening the light switch with his pocketknife and fixing a loose connection with a little stick.

After secondary school Nyaga attended Kenya Polytechnic in Nairobi and received certificates in electrical and civil engineering, and eventually accepted a position with the Kenya Power and Lighting Company. When he returned to his home in Kenya’s Central Province in the late 1990s hoping to work as a self-employed electrician, he was again reminded of the dire infrastructural needs of his community. Except for a few small town centers, access to reliable electricity was absent in the Kirinyaga District.

For the last ten years Nyaga has devoted himself fulltime to spreading microhydro power to his home district, supporting himself and the early stages of his project with the profits he gains from a small electrical shop he owns, as well as his wife’s fabric business.