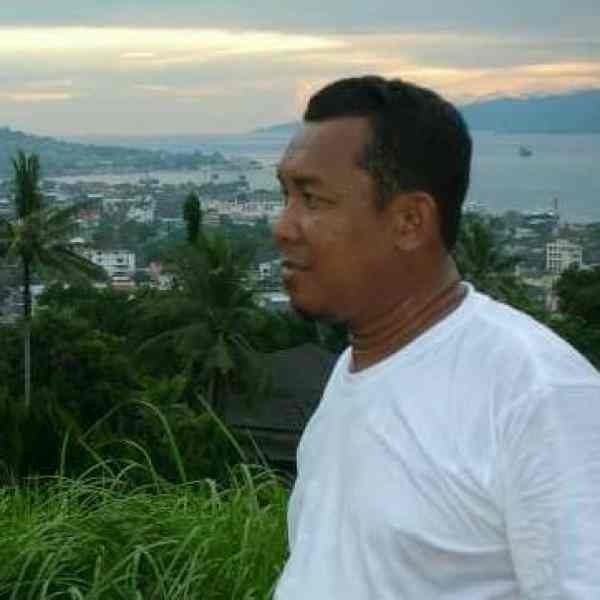 Muslikhin Kusma, works in the very poor Gunung Kidul highland area near Yogyakarta, Central Java. He is organizing recent village secondary school graduates to provide continuing informal challenge and education to the bulk of younger children who drop out of school by the sixth grade.

Muslikhin is launching a targeted yet integrated rural development program focused on women and children. The program has two major components:
(1) Non-formal education for children, especially an innovative library and associated volunteer outreach and tutoring program; and
(2) Strengthening the women's role through: (a) education, including study/discussion groups with a curriculum stretching from role awareness to home economics; and (b) economic supports including income generation (e.g., goats/fodder) and credit reform.

He has started in fifteen villages in two sub-districts of the Gunung Kidul and hopes to develop and spread his work throughout the regency and, in the long run, across Java.

If Muslikhin can refine his library-based volunteer education program for young drop-outs and help it begin to spread, it could have exceptionally wide impact. It's simple, inexpensive, and serves several important objectives and constituencies at the same time.

A number of Ashoka Fellows are working to help more children stay in school long enough to become effective literate. However, in the meantime most of the children of the poor, especially in poor rural villages, are still leaving school well before reaching that level.

Muslikhin doesn't want to abandon these young people. Instead he's creating a library and a team of volunteers to help them continue to explore, the larger world beyond their daily work in the village and the local cinema. Each week the volunteers take materials and teaching suggestions from the library and sit down with the young school-leavers with whom they're working.

The "tutors" or "librarians" benefit almost as much as their young charges. Chiefly recent secondary school graduates, they have to think through the week's subject to be able to lead discussion well. They also get experience helping younger children, which is useful for those who later become teachers or parents. And it gives them responsibility and respect.

Muslikhin expects groups of volunteers that begin drawing on e one library will eventually develop their own associated library, thus gradually spreading the idea in near-by areas. He'll also help it leapfrog to new areas.

Gunung Kidul had and still has the lowest per capita income levels in Java. In addition to being the least fertile part of the island, Gunung Kidul's hilly terrain has few natural resources. Farming is only possible four month yearly and then only for very limited dry-land crops such as cassava and soybean. In this region, where water is scarce, the government's attempt to introduce farming diversification has failed and the regreening program has succeeded only to the extend that it provides shade along the newly paved roads. (These roads invite flight to the cities. They connect directly to the nearby cities of Yogyakarta and Solo, and then on to Jakarta and the cities beyond).

Gunung Kidul remains what it was: poor, arid, and deserted by most of its adult men, leaving behind the women and children who virtually have to take care of themselves. The women toil either in their own narrow plots of land, trying as hard as they can to grow in four months what they will consume in a year, or work as farm laborers. Water sellers and money lenders from outside the area add to the risk of pauperization. Younger children stay in school one half day everyday, largely because it is free. THe older children generally leave school by the sixth grade and help their "single parents" for a couple of years. Then the male adolescents take the bus to the cities.

The degree of Gunung Kidul's poverty is exceptional, but the propensity of its young children to leave school before they are equipped to deal with the modern world is not. Perhaps its new volunteer educators and their library may become one of the region's most valuable exports.

Muslikhin believes that only a carefully planned and integrated attempt, with its elements mutually reinforcing each other, will work in a context where prioritizing seems quite a nightmare. Women have for so long been trapped in basic survival efforts that they seem unaware of their other problems: marriage uncertainty, their children's education, their own role, the skills they need to improve life, etc. Muslikhin started with "secret meetings" with some of the most progressive mothers in several villages. Through problem identification and discussion gatherings, they came up with a list of immediate as well as long-term needs both for the women and their children.

Muslikhin then refined the list into the two major thrusts outlined above, one focused on the women's most urgent needs and the other on those of their children at the point they leave school.

The first starts with regular discussion groups and a twenty-two week participatory course which includes building awareness of the women's role in society, home economics, technical and management skills important in generating new income, and basic legal education. It then goes on to deal with basic economics, sometimes in quite innovative ways. Thus, for example, his efforts to reform the credit system specifically involves each area's traditional moneylenders.

Muslikhin was born 26 years ago to a poor farmer in rural Lamongan, East Java. After he completed high school, he enrolled himself in the Yogya Islamic Institute. Although what he was studying would normally lead him to become a mulabigh, he saw his university-level education as a means of intellectual development and of breaking the stereotypical notion that community developers are mostly school-leavers.

He has been questioning himself about the cause of poverty in his family and around him since he was a young boy. At university he formed a student nature lover group and attracted students from various Yogyakarta universities. They did not camp, however, to enjoy beautiful landscapes; instead they mingled with villagers and experimented with various approaches to understanding their problems. These explorations led the ten core members of the group to establish "Yayasan Desa Rina." Through it Muslikhin began exploring his way to the idea he's now ready to launch.