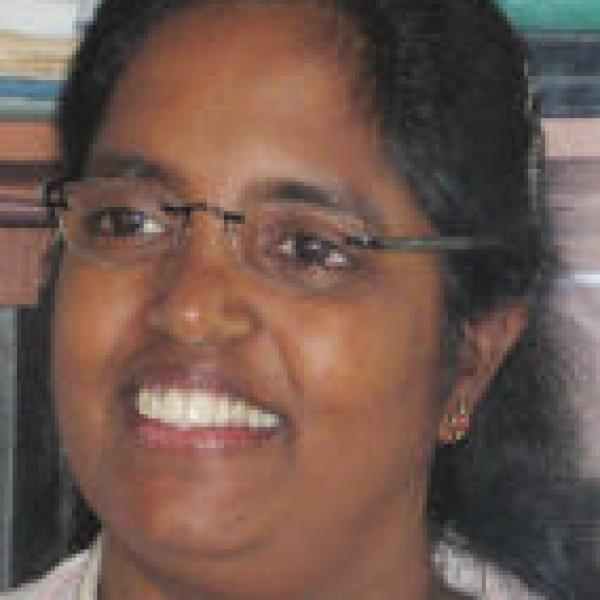 Menaha Kandasamy, the daughter of a plantation worker, has been changing the structure of traditionally male dominant plantation labor unions in Sri Lanka into a more representative and egalitarian setup by ensuring a 50 percent representation of women within the estate committees. Menaha is President of the Ceylon Plantation Workers Union (CPWU), one of the most powerful plantation unions in the country. Menaha also founded the Red Flag Womens Movement that has made immense headway in championing women workers grievances and disputes in labor courts and received landmark verdicts.

In her effort to empower the most marginalized community of Sri Lanka, Menaha has targeted women tea pluckers who have historically formed the backbone of the Sri Lankan economy. The structural change in unions brought by Menaha as the president of CPWU starts from the bottom where through her literacy program and leadership skills training she influences women to be active trade unionists and more assertive of their labor rights. At the top level she has worked on creating an affirmative space that ensures women s equal representation at different strata of the unions. From the estate committee to the district committee, positions are equally allocated for women. According to the regulations established through Menahas leadership, if an estate committee elects a man as its president then only women can contest for the secretary position. By getting this established she has ensured a 50 percent representation of women workers in every estate union committee. These two top members (the president and the secretary) of estate committees represent their estate to the district union committee and the representations are made to the central committee. Menahas mechanism to bring an equal number of women worker representatives from estate committees to the district committees has led 37 such trained women leaders to be part of the central committee which never had women participants before. This representation has not only increased women s bargaining power within the trade union structure, but also with the plantation companies and different government bodies for policy changes. Menaha has trained women trade unionists on labor law and empowered them to take cases to labor courts and plantation companies for negotiation. Four landmark cases have been won by these women in the labor courts which have benefited not only women but the plantation working men too. She has also created a platform for womens active participation in negotiating and revising the collective agreement signed between trade unions and estate owners every three years. This negotiation process, which deals with workers salary anomalies and grievances, used to be an exclusive space for plantation working men. Menaha has made sure that women workers play a vital role in these talks and for over a decade she has been the main driving force behind major plantation labor union negotiations with Employers Federation, labor courts, politicians, and plantation companies. She has used her positive leadership image to argue for and garner equal representation of women workers in other non-plantation trade unions. Currently, garment factory workers, who are also mostly women (72 percent), are joining the trade unions even though they are barred from joining or forming unions by their foreign factory owners. Menaha, with her trade union colleagues, is involved in organizing local domestic workers to form a union to articulate the drafting and passing of a domestic worker act which will alleviate enormous difficulties faced by domestic workers. She is also spearheading a movement that campaigns for a postal voting mechanism (absentee ballots) for migrant workers most of whom work abroad on a contract basis as domestic aide. Out of about 1 million Sri Lankans who work abroad, 600,000 of them are women and about 93 percent of them are employed in the Middle East. Menaha is certain that if these women have a way of voting their voices and concerns can be heard by the policymakers and politicians. She believes that these women can collectively, through their voting power, send their own representative to the Parliament.

Menahas mother was a plantation worker and her father a trade unionist who later led a trade union. Menaha is the fifth of six children. Unlike other plantation families, Menaha and her siblings received an education and four of her siblings are teachers. She was the first to gain admission to university from the estate they lived in. At the age of 16 Menaha started questioning her father s activism within trade unions, specifically their ineffectiveness and blind loyalty to the Up Country Tamil political party. Her family, originally from Badulla, escaped to Batticaloa (eastern Sri Lanka) during the 1983 pogrom against Tamils where Menaha finished high school. During her undergraduate studies at the University of Jaffna in 1987 she faced ethnic tensions again. This was the period when Indian Peace Keeping Forces were fighting the Tamil Tigers and many university students disappeared.Menaha majored in economics and was offered a lecturer post at Eastern University, however, she opted to return to the plantation where she offered free tuition classes to children in the Norwood plantation (one the most underprivileged estates) in Hatton. She also volunteered with some of the women s organizations but found them driven largely by donor agendas. Later, Menaha served as a coordinator for the secretariat of the plantation CO consortium. This gave her an overall idea of how the plantation sector COs worked. She and her journalist friends wrote books and articles on how the community and related organizations have become polarized and party-politicized and highlighted the need to reorganize workers based on their rights. In 2003 she got a scholarship to pursue her masters in womens studies at Bradford University and returned equipped with the knowledge to lead the countrys most liberal plantation trade union.In the South Asian context, Sri Lankan women enjoy a much better physical and social quality of life than women in neighboring countries. They have, for instance, enjoyed the right to vote since 1931, and are well represented in many professions, including law and universities. That is not the case with plantation Tamil women who, like their men, have been an exploited underclass in Sri Lankan society for more than a century, and have had to suffer the additional weight of male domination. In such a context, beginning her life with next to nothing, Menaha s achievement is truly extraordinary. After the tenacious effort that took her to university she chose a life of service, innovation, and struggle. In 2006 Menaha was elected President of Ceylon Plantation Workers Union, establishing a record as the first woman to be elected to such a high position in the trade union history of Sri Lanka. Her tactful way of working within a labor union that is male-dominated and changing the old structure to accept her progressive leadership is a novelty in Sri Lanka. She did not take a short-cut by forming either a women only trade union or a new union which could have secured her the leadership position. By becoming the first woman trade union leader to be elected she has broken the long-entrenched patriarchal trade union tradition. Menaha has used her presidency to bring many plantation-working women to decision-making positions (within the existing union structures), which has enhanced the women workerscollective-bargaining power and brought them to new levels of claiming their rights.