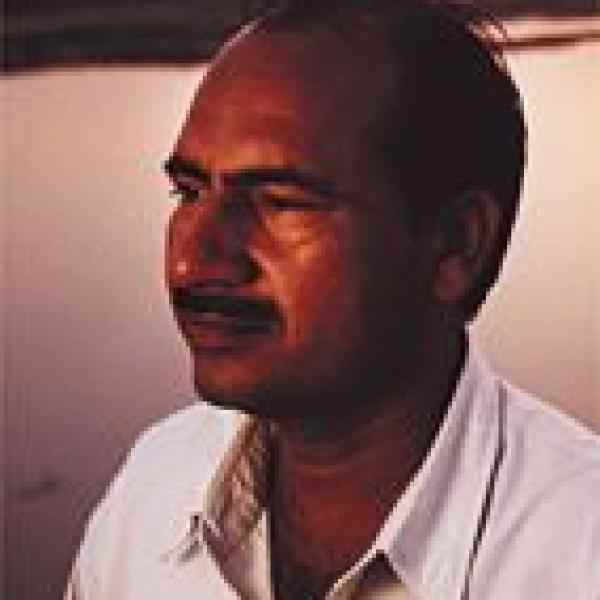 Laxman Singh is building water conservation and natural resource management systems for rural communities in drought-prone districts of Rajasthan state in western India. He is training rural youth to design and implement locale-specific blueprints for water systems that are managed and spread by local communities.

Laxman Singh is bringing natural resource management back into the hands of Indian rural communities that are most affected by the drought and water shortages brought about by ineffective centralized planning. He has crafted and refined strategies in the field of rural development since 1980, and he knows that popular ownership is critical for any sustained movement to emerge. &quot;Like a survival skill, water conservation techniques have traveled down generations in Rajasthan. Therefore, what we need today are not experts from outside, but awakening the expertise within,&quot; he says. Laxman is demonstrating that communities are capable of determining and enacting what they need to meet their critical need for water, and that a critical component for success is that they perceive their capacity to change their situation. &quot;Organizing the people and motivating them towards a common goal was tough, as the upper castes in the village had their own vested interests. But, persistent efforts and the fact that &#39;seeing is believing&#39; really motivated the entire community to make the change,&quot; he says. He concentrates on training youth, now in over 80 villages of Rajasthan, to imbibe local wisdom and implement indigenous blueprints of democratic water management.
Livestock are an important aspect of the rural economy, and Laxman has incorporated into his water management scheme the need to regenerate denuded pasturelands to sustain the cattle. He has supplemented water conservation systems with strict measures to protect the meager land cover and induce the communities to regreen the land. The result has been a scientific model of natural resource management that has revived dwindling crop yields and arrested migration of people and cattle. After two years&#39; work, the irrigated 300 hectares of land in Laxman&#39;s home village of Laporiya reaped agricultural profits worth Rupees 3,500,000 (approximately US$ 83,000).

Historically, communities in Rajasthan have had independent control of the resources in their area. Rajasthan is situated in the Thar desert of western India, where water is a precious resource that must be carefully retained and stored. Thus, a broad spectrum of water management models once dotted the state, every design reflecting the community that worked on them. However, with the introduction of a public water supply system by the central government of India, communities began to be removed from ownership and responsibility of natural resources, especially the forests and water. The lack of access was compounded by the exploitative management of water sources by large bureaucracies and government departments. Moreover, conflicts over water between castes and the breakdown of traditional community structures have made the situation worse. The traditional systems have been replaced by concrete tanks and water storage structures of brick and cement designs that have provided no significant reprieve to the water crisis in Rajasthan. The celebrations and rituals that derive from the use and management of water have also disappeared, with the dissolution of the old systems. In 1991, Laporiya, a village of about 3,000 inhabitants, was a drought prone area with barren pasturelands and agricultural fields capable of producing only one low value monsoon-dependent crop. About 40 percent of the villagers had migrated to nearby towns and villages and about 75 percent of the cattle were driven to the neighboring states of Uttar Pradesh and Madhya Pradesh.
There was one percolation reservoir (a reservoir built to store rainwater so that the stored water percolates gradually into the nearby wells) and one irrigation reservoir in the village: both were silted up and the embankments broken in places. The water level in the irrigation and drinking water wells were at 50 to 70 feet below the ground.

Laxman began by studying the system for water management in Laporiya. When he began repair work on Anna Sagar, the irrigation reservoir and lifeline of his village, he had two allies: a friend and the village priest. But in less than a year, the entire village had begun to volunteer and take part in planning a comprehensive model of water management that went much beyond the repair and construction of its ponds to include irrigation of the 300 hectares of land that the villagers owned collectively. Laxman&#39;s method is a combination of simple techniques for tapping every water path in the village and diverting them into the natural watershed of the village. Village residents, who understand their terrain best, construct the diversions. Water is stored in a network of community ponds, lakes, and earthen percolation reservoirs repaired or constructed by the villagers. Water is diverted from these networks to agricultural plots and pasture lands through simple conduits like canals, spillways, and aqueducts. A separate grid of stop dams in pasturelands arrests runoff in large storage spaces. Embankments are wide and serve as roads. Active plantations along these embankments of local species have regreened villages and provided fodder to cattle.
The Laporiya projects were financed through community donations, voluntary labor, and outside funding from private donors secured by Laxman. The system is maintained by village governing councils with technical assistance from Laxman&#39;s organization, the Village Youth Service Association. Strict fines were imposed against the cutting of trees and each family was asked to plant at least five trees in their land. In two years, 300 hectares were irrigated, and 25 hectares of pastureland were developed. The water levels in the village wells had come up to 15 to 30 feet, and soil runoffs (erosion) had been reduced due to the grass growing in the pasturelands. Migration from the village has also come down, and the cattle are no longer driven away for fodder.
Local participation has organized itself around the tradition of volunteer community labor (shramdaan). Youth groups and the village councils have set up a fund to maintain the resources and assets they generate. The Association has set up centers in Nagar and Tonk to sustain networks of youth technicians more directly and organizes training programs every three months for groups of 25-30 youth. In these villages, the revival of local water management expertise has established bridges for other developmental efforts such as nurseries of saplings and health care facilities.
Recognizing the effectiveness of cultural vehicles for popularizing and spreading his method, Laxman relies largely on social events and Padyatras (extensive tours on foot) organized by villages to review the work of individual communities. Every year, on Devyuthan Gyaras, the day marked by tradition for the worship of ponds, a large cohort of youth water technicians, village leaders, and other involved villagers travel to over 80 villages to revive the oral traditions of water management and encourage regreening. The Padyatra starts from Laporiya and subsequently breaks off into small clusters that interact with different villages.
Laxman is confident of taking the water model to over 16 districts of Rajasthan in a two-year time frame. He is working with rural activists and citizens&#39; groups in Jodhpur, Jaipur, Alwar, Tonk, Dosa, and Pali to faciliate the replication of the model in 113 villages. His organization has also been identified by Catholic Relief Services (CRS) as their nodal agency in Rajasthan to train CRS partners on water management techniques.

Laxman Singh was born into a farming family in Laporiya. As he grew up he saw his home pasturelands disappear and his once green village turn drought-prone. He obtained a degree in social work from Rajasthan University and then returned to Laporiya and started the Youth Service Association in 1980. Thereafter, he traveled to the forests of Ranthanbore, Assam, and Manipur and realized that the pasture in his home village had a lot of potential. He later applied the lessons learnt from his travels in Laporiya - the start of the movement that he now plans to grow to scale across Rajasthan. Laxman has a track record of setting precedents in his personal and public life. During his wedding he created a furor in his community when he publicly announced his family&#39;s decision to wed subsequent generations into families that would neither give nor take dowry. As a result, though all his brothers and sisters married late (families that eschew dowry in Rajsthan are rare), it marked the beginning of a subtle movement against dowry in his village.
Laxman&#39;s rapport with communities has yielded results that have even earned the recognition of the government. In 1991 and 1994, he was the recipient of the prestigious Nehru Youth Award and Vrikshamitra Puraskar (&quot;Friend of the Environment Award&quot;) as recognition of his work in Rajasthan.