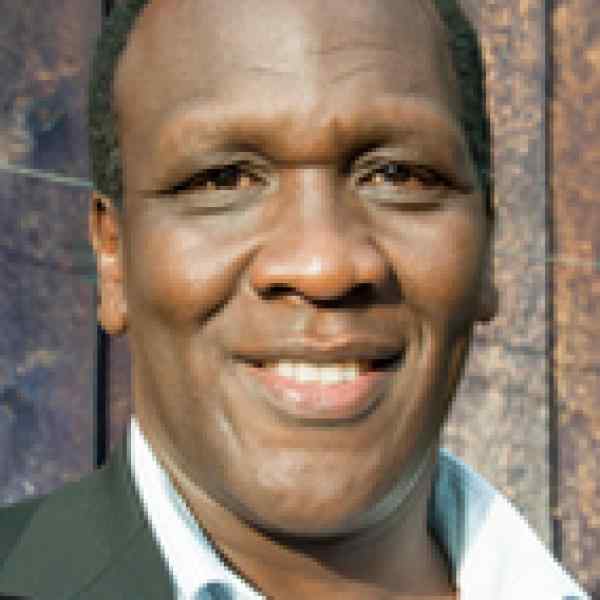 Through a model that relies jointly on aggregating production, co-ownership of agricultural businesses, and retooled value chains, Haron Wachira has created a surprising win-win scenario for subsistence farmers and agro-processing businesses in Kenya. This is impressive not only because of the unlikely partnerships formed, but because the agricultural sector in East Africa is chronically mismanaged and poorly coordinated.

Seeing the ineffectiveness of current approaches in improving the livelihood of farmers, Haron uses his business experience and entrepreneurial acumen to develop a full system approach that connects farmers to the private sector through specialized value chains. In his innovative win-win model, this approach has both parties invested in each other’s success in a mutually beneficial partnership that has the farmers earning more while boosting the capacity and revenue of their private sector partners.

Haron is organizing smallholder farmers in an effective production unit much the way an efficient and results-oriented business would. Organized into groups of 10 households, each group is armed with a vision, committed and hardworking members, skills, financial literacy, a product, accountability structures, performance standards, and a processing and marketing partner. Haron is also rejuvenating the underperforming industrial sector, increasing the incomes of farmers in the short-term and also setting them on the path of long-term wealth creation. By negotiating a partnership with processing companies that has the farmers owning a majority stake in the processing company, he is turning small-scale subsistence farmers into visionary agro business owners.

The value chains around which Haron is organizing smallholder farmers are built on locally available farm produce. Through an existing local company, this produce is processed and sold to a local and existing market. Haron’s approach can be tailored around virtually any kind of farm produce which, when processed, has an existing local market. This, of course, means that the model is inherently replicable and scalable and that the potential benefit for small-scale and subsistence farmers is huge.

After its independence in 1963, Kenya experienced rapid economic growth that went on until the mid 1970s. This growth was characterized mainly by extensive industrial development in the food processing sector which in turn created a market for local smallholder farmers who produced most of the sectors raw material. However, mired in corruption and unfavorable policies for local industries and farm producers, the economy of Kenya started to plummet through the 1980s and to date has yet to turn around.

This economic downturn has affected different stakeholders, particularly smallholder farmers whose primary source of livelihood is agriculture. Without a thriving industrial sector to buy their produce and without the economies of scale to compete on the international scene, smallholder farmers have resigned to subsistence farming, wallowing in poverty and hardship. The poor circumstance of farmers in Kenya has lingered on for decades and has been blamed on a dysfunctional extension services system, bad policies, lack of access to credit, poor infrastructure, tribal conflict, land wrangles, and corruption, among other barriers.

Despite these challenges and obstacles, agriculture, even at its current small-scale and given its mostly subsistence nature, contributes 30 percent to Kenya’s GDP and is the primary source of livelihood for 80 percent of Kenya’s population. Important not only to Kenya’s economy but also to the survival of its mostly rural based population, agriculture has taken center stage in development efforts—both local and international. Development of agriculture has become synonymous with poverty eradication and attracts millions of donor funds every year. Value chain development, market access, information technology, farm inputs, and access to credit, among other issues, are being addressed to uplift farmers. With high levels of corruption, uncoordinated efforts, low capacity to perform in the public sector, and an unsupportive policy environment, little success is being registered. Kenya’s industrial sector is still operating at only 10 percent of its capacity and over 50 percent of Kenya’s population is still poor after over a decade of such interventions.

Although Haron’s model is built fundamentally around highly efficient units of production, before he sets these units up, he first establishes a market for what it will produce. He therefore starts by identifying an underperforming processing company whose raw material is locally available. When he finds one, he convinces them to sell part of their stake to a group of farmers who would guarantee them a stable and consistent supply of raw material at a subsidized cost. When negotiations are concluded, Haron then finds and organizes farmers already producing the needed raw material into a basic group of 10 households called “Nyumba Kumi,” or not surprisingly, “Ten Houses” in Kiswahili. The number of groups he sets up depends on the production capacity of each group versus the company’s demand. To join a group, each household has to be vetted and recommended by the rest of the members of the group. Each group runs by high accountability and performance standards. Members are trained on financial literacy, specialization, production management, and team work, among other skills.

This training of farmers, paired with the restructured and tightly managed businesses that Haron has launched, are professionalizing and transforming the agricultural sector in Kenya where, in the past, layers of inefficiencies and mismanagement had led to dismal underperformance. Now, once a Nyumba Kumi group has been set up, it follows a strict delivery schedule in order not to upset the rest of the value chain. Delivery of raw material is done at dedicated bulking centers for collection by processing companies. Haron has convinced local district councils to allocate part of their budget to the construction of bulking centers. Through this strategy, he has already raised nearly US$700,000 to construct bulking centers in over 20 districts around Kenya. When a group delivers produce to the bulking center according to agreed upon timelines and quantities, 90 percent of what the group is owed is paid to them in cash and the remaining 10 percent in equity. This payment model is maintained until the farmers acquire 80 percent of the processing company.

“Akili,” which means cleverness or knowledge, is the name attached to each of the products and is now becoming a well-known brand in Kenya. There are currently seven value chains and partnerships running under Haron’s model, producing, processing, and marketing coffee products, leather products, food supplements, fresh fruit beverages, herbal products, products of apiculture, and dairy products. Since each product is branded Akili, consumers of Akili Honey, Akili Nutrimix, and Akili Aloe Vera, for example, know that they are supporting groups of farmers and producer-owned companies. Though only launched in 2008, Haron’s work with Akili Holdings was recently recognized by the United Nations Development Programme, with whose support he plans to replicate his model of wealth creation for farmers in 15 constituencies around Kenya in an important step toward the realization of his vision to see a proliferation of value chains and industries co-owned by farmers all over East Africa.

Haron was born, raised, and educated in a village in Kirinyaga District in Eastern Kenya. He attributes his character to the lessons he learnt from his grandfather and teachers in school. From a young age, Haron demonstrated a keen interest in learning about and solving problems. An interesting case is when he met an engineer in a neighboring village and convinced him to teach he and his brothers how to construct a well. Haron and his brothers then went on to construct over 200 wells all around his village.

As a young professional, Haron demonstrated a similar knack for innovation and leadership, first in starting up the first and only major computer assembly plant in Kenya, commanding 30 percent of the computer supply market in Kenya. Next, as an auditor in the coveted PricewaterhouseCoopers, he quickly rose to become a partner. At PwC Haron was responsible for cutting down the firm’s desk space by 50 percent, ultimately saving them millions in rent by introducing and implementing an innovative resource sharing technology across the firm. Haron went on to chair the board of Tana Water Service, an experience that got him to once again engage with rural communities all across Kenya.

It was during this time that his previous and by then current experience as a high level executive started to shape his view of how poor rural communities could be helped more sustainably. Interacting more with rural communities, he started to see and understand their challenges more clearly. He was now able to more clearly see the gaps in the interventions on the ground and was able to use his business mind and experience to craft alternative solutions. Ousted from the board of Tana Water Services a few years later for taking a stand against its corrupt officials, Haron saw and seized the opportunity to make a difference where his passion always was—in rural communities. This was the beginning of his work with farmers on value chains.