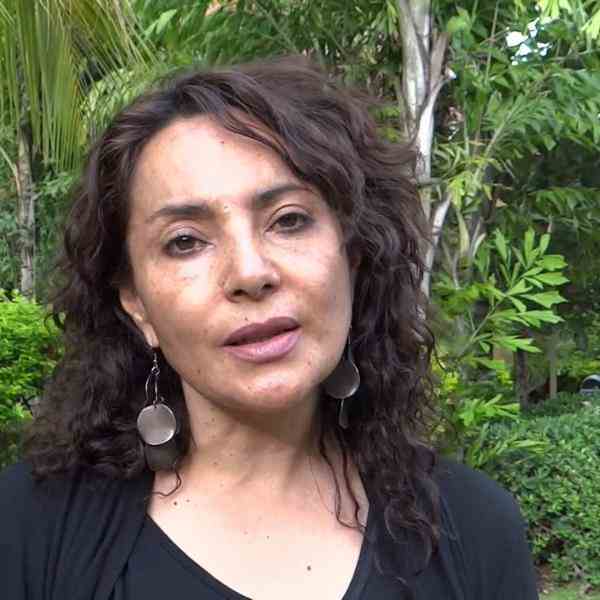 Claudia empowers children and young people through their Social Sports Schools and prevents abandonment when detecting vulnerable children in schools where she has alliances. She also, strengthens the social structure gathering the family and the community around positive living spaces. Claudia breaks with the scheme of family violence and neglect of children and young people, combining Prevention with Care Programs and Shelters. She showed that it is possible to reintegrate healthy and empowered young people with "life skills". Claudia marked a before and after in Bolivia, since her model of shelters did not exist in that country, and there were only correctional centers for children and adolescents, where they were treated as prisoners.

Claudia promotes the exercise of the rights of children and adolescents, to build a culture of protection, good treatment and peace. Claudia differs from other initiatives because she clearly separated children’s stages and developed programs for different needs. Even though she started with a Protection Program, which serves a population of 0-20 years old, she expanded and developed the Prevention Program with the Social Sports Schools, thus eradicating the causes of child abandonment. In the Social Sports Schools, she empowers in skills children and young people, from 6-17 years old and their families, she creates a bridge between formal and informal education, where children from different social classes interact and work together, and thus prevent new children joining the streets.
At a very young age Claudia became involved with children who have been abandoned, and unlike the traditional approaches she does not criminalize them, but understands that children have developed a series of behaviors, thoughts and defense mechanisms that have helped them survive, they have put aside their fears, emotions and feelings, typical of their age, to assume the defense of their lives turning them into "adults". Claudia saw and sees street children as owners of their circumstances, capable of making their own decisions and choose a positive and responsible change in their lives. Children capable of learning new values, behaviors and lifestyles. Claudia believes in a demanding and driving love, responsible and mature, not an overprotective love that makes it impossible for them to adapt to a world of challenges. It is a love that gives them the security of having people who will constantly encourage them and hold them accountable for their own actions and decisions.
Claudia’s model is replicable because she has demonstrated the full reinsertion of sheltered youngsters and the actual prevention of domestic violence situations and in schools. For it empowers children, strengthens family links and coexistence in schools. Besides having involved the State to assume responsibility, Claudia has created awareness and articulated artists, businessmen and the general public to support financially and with volunteer work in preventing violence and child neglect. This way she obtained the alliance with the recognized Real Madrid Football Club Foundation, for technical, logistical and image support programs promoting Values Education in these soccer schools. Claudia could bring to ASHOKA leadership on the issue of children and young people’s rights, impacting the entire region with the replica of her model.

In Latin America, 1 in 5 children under 15 is in the streets (CEPAL, 2013). In Bolivia, 44% of the total population is under 18, which translates to 4.4 million young people. And more than half of them (58%) are in poverty. In the country, poverty affects almost half the population (45% of a total of about 11 million people), and most of these people are children and adolescents. There are 3,000 children living in the street, about 1 million children and adolescents who are workers and exactly 1,487 children living in prisons with parents serving criminal sentences. To these inhuman living conditions is added violence, since there is an alarming number where 7 out of every 10 children receive physical or psychological abuse in their homes, in schools or in their workplaces. The very poor situation of children in Bolivia is so severe that, for every 100 children under 1, exactly half have no birth certificate and 30 children out of 100, dropout from elementary school. And in addition, there are complex situations where children are the most vulnerable. Consequently, for example, 47% of reported victims of trafficking crimes are girls, adolescents and women.
Only 20,000 children live in foster homes, and 80% of them have families. The loss of parental care in families is due to lack of resources or lack of income that prevents the fulfilment on covering the basic needs of children. In Bolivia there exist very poor native families, farmers with parents who do not speak Spanish -but only the Quechua or Aymara native languages-, that cannot read or write, with 6 children that do not attend school and most of them without ID, because they have to help in the survival, living in overcrowded conditions without access to basic services, and health. Likewise, when they arrive in the city they find themselves without training skills, outside agriculture, which leads them to extreme poverty, drug use, and alcohol consumption, deriving into situations of domestic violence, resulting into children leaving their homes.
Children in street conditions assume violence as a means of survival and a way to interact and solve problems. There is an excessive use of force and assaults with knives are frequent. They look at people who approach them with distrust and feel no need to go to school because it is much more attractive to experience and explore life from the streets. To momentarily escape the aggressive environment in which they live drug use is constant, mainly as ‘Clefa’ inhalants. Many times, the lack of parental care and the abandonment situation means that girls approach the world of prostitution, and this exposes them to the risk of early pregnancy or contract a sexually transmitted disease as serious as HIV/AIDS. Scars they will have for the rest of their lives. The lack of budget allocation from the State to protective and guarantors of Children’s Rights of Institutions, as well as the constant rotation of personnel in these institutions make it difficult to implement public policies on the rights of children and adolescents.

Claudia comes from a family who taught her the responsibility to give to others. Both her mother and father served as a role model and inspiration, since she remembers that there were always people who helped with either shelter or food at her home. Since she was 12 she went to orphanages and talked to the children and at 15 she led educational programs for the older, who had to leave the orphanage. In fact, she contacted several supermarkets and restaurants so they would hire them and this way have money to afford a place to live.
Claudia's life changed radically one morning in 1990, when on her way to college, with just 18 years of age, she found 30 street children roaming the streets. When she saw them she asked herself: Who looks after them? What does the State do? and the key question: What do I do? At that moment, she met Joaquín Verastez a 7-year-old boy who had not eaten in two days. Claudia invited him to have breakfast and listened to his history of neglect and mistreatment from his mother, who left him with his grandmother, and that after her death came under the tutelage of such a violent and abusive uncle that Joaquin preferred the street. The next day Claudia gave him a pair of shoes, and the following day took him to live in her own home and with her own means decided to pursue the protection of street children.
She starts with the evening school reinsertion program, and for the next three consecutive years she encouraged her friends to volunteer with her and during the evenings they would go play soccer in a park in La Paz, where street children would take shelter from the darkness. This way she earned their trust and taught them to read and write encouraging them to join the school. Later, with the support of her parents, she managed to rent a house and moved, together with one of her classmates, to live with the 50 youngest children from the park, and with donations managed to equip the house. Thus began Alalay.
In 1996, she opened the house for girls and teenage mothers, housing teenage girls from 11 to 15 who had their babies in the streets, as a result of abuse or rape. And under her direction motivated two educators and some volunteers to join her cause. Today she has developed a Model, not only of protection but prevention, and with her Social Sports Schools she dreams that no child takes to the streets. Claudia, like their parents, involves her children and husband in this life project. She is a civil engineer, but she taught herself education, values, human rights and enjoys the recognition of the Bolivian Society.