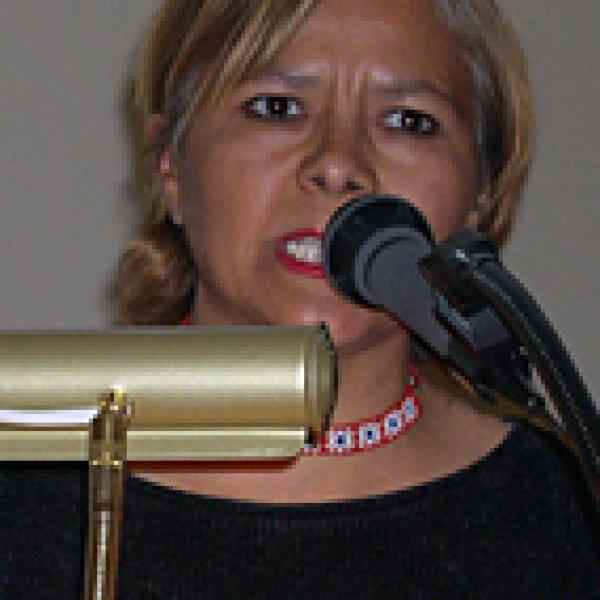 Carmen Valadez organizes women workers in maquiladora factories near the U.S. border with dreams of helping them to understand and pursue their rights under Mexico's domestic and international legal obligations. In so doing, she is in effect reinventing trade unionism for the niche in the globalized economy occupied by special export zones.

Ever since she first witnessed the working conditions endured by women in Mexico's maquiladora factories, Carmen Valadez has wanted to fight for workers' rights from the inside. "Maquiladora" is the name given to factories in Mexico's special export zones, often located near the United States border and owned by foreign companies. Such factories are known for their violations of workers' rights. They require long working hours for low wages, often amid dangerous working conditions for the women and even the children employed there. Traditional approaches to labor union organization typically do not succeed in these special factories, among whose defining features are large reservoirs of unskilled labor and legal and tax contexts that militate against longer-term relationships with the place where the factory is located.Since 1989, Carmen has persistently translated class- and gender-based labor analysis into practical methods for women to change their working conditions, leveraging Mexico's obligations under its own laws and international treaties. Where Mexican trade unionists have failed, she educates and organizes the maquiladora workforce to stand up for their rights and demand better pay and working conditions and to ally themselves with women workers throughout Mexico and internationally. The international dimension of her work differs from traditional trade union internationalism in its strategic linking of women workers' struggles in special export zones throughout the world.

The maquiladoras along the border between the United States and Mexico stem from an agreement between the two governments to provide mutual tax incentives for American companies to set up factories on the Mexican side of the border. The goal was to absorb some of Mexico's labor surplus and thus slow illegal emigration to the United States. Not surprisingly, however, the incentives have attracted many multinational companies for which the top priority is often to save on labor expenses by cutting corners. They pay poverty wages and put no effort into providing safety measures for their workers. The result is that workers suffer in deplorable conditions. Maquiladoras have proliferated in the wake of NAFTA: since 1994, the number of such factories has grown from 2,500 to 3,400, and they have expanded into the interior of the country.

Carmen estimates that 66 percent of the maquiladora workforce is female. Factory owners aggressively recruit female workers and perpetuate the myth that they make the best workers because they are naturally meticulous and submissive. They are often hired while still adolescents, with no secondary education or union experience. More and more jobs traditionally available to unskilled Mexican workers, such as in supermarkets, are requiring proof that the applicant has completed high school, a screening practice some maquiladoras are also beginning to adopt. Accordingly, the uneducated women who work in the maquiladoras are among the most vulnerable members of the labor pool, and many have traveled great distances from the interior to secure jobs there. Not without reason, it is assumed they will have neither the awareness nor the courage to protest their poor wages. As Carmen describes the situation, "Women at the maquiladoras work three long shifts a day, obligatory extra hours, and maintain their families. On average, they rest for three to four hours every day and live in neighborhoods where pollution levels are horrendous because of effluents coughed out by factories. The average life of women as producers spans from ten to fifteen years. By the end of their shop-floor life, their legs are covered with varicose veins and they are written off from the laborers' register. The vicious circle begins again as adolescent girls step into their mothers' roles."

Many of the exploitations that women routinely face in the maquiladoras are illegal. Because it is gender specific, the widespread practice of pregnancy testing as a condition of employment violates international conventions to which Mexico is a party as well as domestic laws that guarantee women equal protection under the law. It is not unusual for women to receive pay for fewer hours than they work, to be short changed on overtime pay, to be forced to work overtime on demand, to be required to don bikinis for "Miss Maquiladora" beauty contests and endure other forms of sexual harassment, to be forced to clean restrooms or be laid off when work is slow, to be forced to sign probationary contracts before a permanent one is offered or to return home to a slum where the water is polluted by toxic factory waste–all of which are illegal practices under Mexican and international law.

Human rights investigators have discovered that the maquiladora workers find it inconceivable to rely on labor unions to assist them. They perceive the unions as unhelpful and even obstructive to their efforts to exercise their legal rights, colluding with factory management and too closely aligned with the Institutional Revolutionary Party, which has long dominated Mexican politics. Government inspectors of labor and labor rights ombudsmen have exhibited both indifference to women's complaints of discrimination and a lack of training and equipment–legal and material–to pursue such problems. The government has a powerful disincentive to enforce the laws since the maquiladoras brought more than $29 billion into the Mexican economy in 1996 and employed some 850,000 workers.

After the devaluation of the peso in December 1994, average monthly wages in Mexico slipped from $70 to $35. Women particularly felt the pinch of the economy's crunch; Mexican labor laws technically prohibit discrimination against women but recognize men as "heads of families." Although many maquiladora women are the sole support of their children, they are paid less than male workers, and few women are employed in the factories dealing with auto parts, where wages are higher. Still, the pay is better than domestic service, the only alternative for most of the women, and they are extremely reluctant to risk their precious jobs by lodging complaints.

The workers face tremendous obstacles in fighting for their rights. Most of the companies that own the maquiladoras have built these factories because of the promise of cheap labor costs. Carmen recognizes the opposition she faces from these powerful companies and knows that real progress will require years of struggle.

Carmen recognizes that an effective solution must address a complex web of issues including labor laws, unionism, feminism, ecology and international solidarity. "The starting point for any plan," she says, "is awareness building." To do that she founded Women's House/Factor X, named after the designation for women on factory rosters. Factor X is the first assistance center for women workers in Tijuana. The center provides health and education assistance and a place for women to gather. There Carmen conducts regular training seminars. She teaches women laborers what a maquiladora's place is in the national and international economy, what NAFTA is, why their labor conditions exist and what their rights are under the law. She and her staff explain how working conditions can harm their long-term health and cause injury, disease and miscarriage; they demonstrate how the system for addressing grievances operates and provide free legal assistance to make it work better. In one instance, a Factor X pro bono attorney won a case of sexual harassment for a woman after she changed from a married attorney to a member of the local labor tribunal, which usually finds for the factories. Carmen trains women workers to develop solidarity, to treat all complaints as collective issues, backed by due legal processes, that their employers must take seriously.

For several years, Carmen has organized diverse forms of organization, protest and non-cooperation, from stopping production lines and collective absenteeism to open demands for an independent union. She is now working to increase the visibility and frequency of such acts and to coordinate them with groups throughout Mexico and around the world. She trains women to make their demands public through the media. They print flyers and pamphlets about the problems and the laws that apply; they send faxes to the managers and boards of the international parent companies of the maquiladoras. They hold local labor conciliation and arbitration boards accountable; they make use of the legal institutions in Mexico's Secretariat of Labor and of human rights officials. In 1996 Carmen and her colleagues at Factor X were a principal resource for a report on sex discrimination in Mexico's maquiladora sector by the New York-based Human Rights Watch Women's Rights Project.

As economies globalize, Carmen has led the way to connect one labor struggle with another in Tijuana and beyond. Beginning in 1994, for example, she forged ties with Mexican telephone company workers whose working conditions were somewhat better, but whose collective contract was terminated after the devaluation of the peso, when nearly 40 percent were laid off. The telephone workers' union and the maquiladoras continue to support each other in the states of Cananea and Sonora. Carmen was the only representative from an American continent at a conference on Women Working Worldwide held in in 1996, where she began building bridges with Asian workers. The maquiladoras' international collaborations have continued to grow: with the Canadian Labor Congress and with local versions of "maquiladoras" in Central America, Africa, the Caribbean and Asia. In 1997 Korean Hyundai workers will tour Tijuana to consolidate ties with the maquiladoras. Carmen has influenced the formation of worker unions in Brazil and Paraguay that support her movement and are establishing a similar vision of gender in their own contexts. Her goal is to foment the creation of a worldwide network of women workers that will act as a powerful force against exploitation everywhere it exists.

Carmen has also formed a bi-national partnership linking Tijuana and San Diego organizations: the American Friends Services Committee and Taller de Arte Fronterizo. Together with colleagues throughout Mexico, Venezuela and Colombia, Factor X is creating a research network to help labor advocacy groups coordinate their work and to recruit academics to work on social issues. She has formed collaborations with the Permanent Seminar of Chicano Studies and the Mexican government's National Institute of Anthropology and History (INAH), which further integrates her analysis into the academic mainstream and thus into the larger society.

Carmen comes from a true border family. Originally from the state of Michoacán, she, her mother and her brothers migrated to Mexicali in search of jobs. There she had her first view of the maquiladoras.

Her experience within her migrant working family was the base for her future work. "My family were all workers. My mother was a domestic. We were ten children; I am the next to last. Through all the work of my brothers and sisters and mother, I got the opportunity to study. When I was about to turn eighteen, I went into Catholic spiritual exercises; the nuns were part of the liberation movement. In 1977 they invited me to a liberation theology class in Hidalgo. My consciousness opened. It was the first time I heard about social classes and understood I was part of the working class. I realized what my family had been going through, and I wanted to change things. I thought of my brothers and sisters and mother and how they were working and kept being poor. It was very sad. There is a social dimension to things that you cannot change on the individual level. You have to make a collective change."

Carmen moved to Tijuana. She trained herself through academic work and became a gender activist. From 1989 on, she has dedicated herself to giving classes and workshops to women workers on gender, sex education and health.