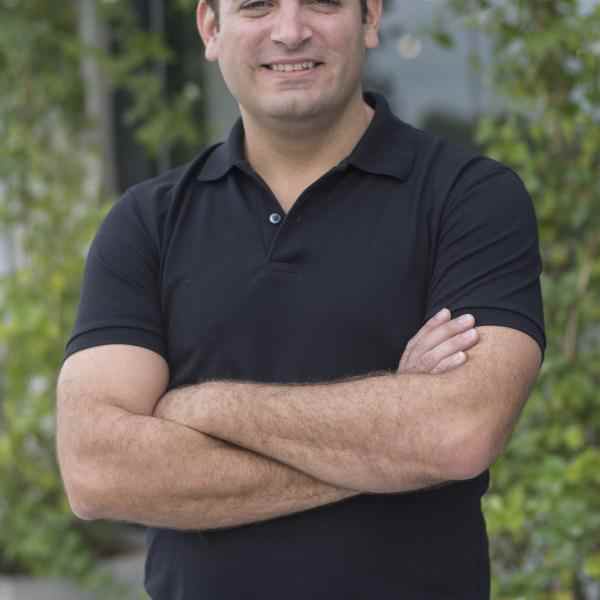 Bruno is developing an entrepreneurial ecosystem in Paraguay and Latin American to change the way society relates and solves problems. Through a youth-centric approach, Bruno is promoting social innovation through a synaptic network of young social entrepreneurs dedicated to solving social problems in sustainable ways.

Bruno is promoting and accelerating the development of an entrepreneurial ecosystem dedicated to social innovation in Paraguay and Latin America. He is convinced that the way to promote social and economic development is through entrepreneurs, especially young entrepreneurs, who seek to positively impact their environment.

In order to increase the number of social entrepreneur promoting social change, Bruno is driving collaborations with the private and public sectors, civil society and the media, while specifically working with young people to develop entrepreneurial skills and create high-impact collective initiatives. Bruno is managing to position social impact and entrepreneurial skills as a vocation. Important in this approach is to support youth and develop pathways for personal and professional development, as well as a way to contribute to the development of their country.

To this end, Bruno created Koga, the first incubator-accelerator, certified as a B Corp in Paraguay. Koga seeks to inspire, train, accelerate, and incubate social entrepreneurs and change agents in established organizations. Moreover, through Koga, Bruno works to implement values and practices of social innovation into the public agenda in order to shift policies that eliminate barriers towards entrepreneurial development.

In Paraguay, 17% of young people are not included in the education system, and access to the formal job market is hard to come by. 72% of young people work in the informal market, resulting in little to no opportunities to engage with and develop a career in a formal way. Moreover, only 2% of young people in Paraguay are recognized as entrepreneurs, creating an even more restricting economic environment. In 2012, Paraguayan officials begun to flag economic concerns in the country, citing a lack of economic activity among youth. However little has been done to tackle the issue at scale.

In addition to a restricted and lackluster job market, entrepreneurship in the Paraguayan context is usually associated with for-profit entities, that are rarely devoted to social and environmental impact. This dynamic creates little incentives, and for those few entrepreneurs and their companies who are innovating in the country or those organizations who seek to impact social and environmental sectors, have no ecosystem support. Thus citizens seeking a professional career with social impact are restricted in their options. Adding to the complicated economic environment is a historical assocation of government and public corruption, making entrepreneurship in the public sector difficult to inspire, as trust is lost between entrepreneurs and government.

In addition, there are cultural factors linked to the diffusion of entrepreneurship, which stand as an additional barrier. Among the biggest barriers are the connotation of success being linked to monetary outcomes, and a culturally low tolerance for failure which in turn discourages innovative experimentation. This is turn undercuts any efforts to break through barriers to enable actors from varying sectors to collaborate with each other.

Bruno co-founded Koga as a means to develop a robust ecosystem for social entrepreneurship and sustainable economic development. Young people are at the center of his approach, guiding them through a path of learning and action. This is accomplished through inspiring spaces, classes and mentoring, and concrete venues to implement social impact enterprises. Throughout the process, a pipeline is generated to detect new, committed and innovative entrepreneurs who are supported through incubation or acceleration.

Koga, has five business units which were developed progressively. Koga's value proposition follows 4 staggered stages, which can be followed in that way, but are also self meaning in each phase, for the specific publics and interests .

At first, Bruno was interested in the idea of generating impact through mainstream business avenues. However he rapidly realized, that social companies did not exist in Paraguay. And because of this, he decided that their contribution would be more impactful if they were able to incubate and/or accelerate social companies. However, even with this approach Bruno realized that Paraguay didn’t even have enough projects to incubate. Thus he shifted his approach to try and tackle the problem at a more systemic level. As a result, Bruno is currently enabling a strong ecosystem of youth, social entrepreneur and traditional economic players, universities and media.

Initially they launched Gramo, a digital education platform where they engaged internet users and more specifically youth in different ways of thinking about success. Through inspirational talks and digital engagement techniques, Bruno connected a large community of young people who became excited and curious about the field of impact entrepreneurship; in doing so, he established the foundation of a Paraguayan entrepreneurial network. The lectures are recorded and then uploaded to both the Gramo Chats, a YouTube channel and the “Paraguay TV” television channel. Bruno has developed 6 editions, with 250 inspirational speakers from different parts of the country and some international speakers. More than 30.000 people have attended the talks, and more than 1 million online viewer have attended the sessions virtually.
Connections generating from Gramo include the development of a law to invest in child nutrition, established in partnership with Argentine Ashoka Fellow, Abel Albino. Among the success of the events, they rapidly realized that inspiration was important but not enough, because young people were lacking tools and specific knowledge to create their own projects.

With the success of Gramo, Bruno then formed Transfomadores (Transformers), an intensive training program to help entrepreneurs enhance and scale their ideas. Today, they have officially completed 4 editions of Transformadores and 1 bootcamp, with 250 participants. Moreover, over 40 existing social enterprises have been impacted as a result of the organization.

To follow Transformadores Bruno also created a competition platform for social innovation called Trampolin. Through the initiative, promising projects are given seed capital to foster their activities. As of today, Trampolín has gathered 1400 impact enterprises ideas developed by 3000 participants, and 9 of them were incubated and developed as new companies. The Impact Lab is the last step of Koga value proposition, from which 15 existing companies with social or environmental focus are incubated and assessed to grow bigger. Bruno has also developed Loffice, 6 co working spaces that gather 30 companies and more than 200 entrepreneurs. Large companies invest in the grow of this companies, in the initial stages.

In the present, Bruno is working to set up the first angel investment fund of Paraguay to nourish the ongoing and emerging ventures. Koga is currently working throughout Paraguay via an ambassador program - Former participants of the program. Koga has scaled to 20 cities in the country's interior.

Gramo is one of the more popular initiatives established by Koga and has significantly scaled. To date they have rolled out Gramo in Medellin, Colombia and Washington DC, USA. In 2017, they hope to expand Gramo to 10 more cities in Latin America in partnership with local organizations and position it as a gateway to develop or reinforce entrepreneurial ecosystems. In past May, they developed the first edition of the Gramo jointly with FISS (The Social Innovation Festival borned in Chile), with at least 10,000 participants.

Through the various activities, Bruno and his team have created an institutional culture that has at its center collaboration and the integration of actors and sectors to promote true development and bring new capacities to traditional players. To do this they have allies from all sectors: Cervepar and Tigo, Ted, Agora Partners and Sustainable Brands, Development Latin America, Unicef, Incupar, Globalshapers, among others. The long-term goals aim at influencing public policies, achieving the creation of a Ministry of Entrepreneurship, influencing the Conacyt (National Council of Science and Technology) to consider innovation as part of its missionary work, and that Congress allocate budget to the promotion of innovation.

The Koga team consists of 4 co-founders, 19 staff members, a board of 4 members (co-founders) and an advisory board of 12 people. Bruno is the Executive Director. The organization's funds come from 40% of companies, 40% from FOMIN, 5% from government funds, 10% from sales of products and services. In the long term, the model will turn to a model of incubators similar to the United States, where Koga will take a small share of the incubated organizations and then receive the economic benefits should they be successful.

Bruno grew up in an atmosphere full of opportunities. Bruno’s grandmother was a big influence as a female entrepreneur running a successful tobacco business until she was forced to shut down her business by the President of Paraguay who had a competing venture. However, as an important lesson to Bruno, his grandmother persisted and started a new business in Argentina, where they all moved. Bruno’s father was also an entrepreneur, which allowed Bruno to engage in the organic sugar industry at the age of 19. While enjoying and taking full advantage of these opportunities, there was also a sense of discomfort and discontent within him, feeling that his situation was a privilege of few people, and that this meant he had a responsibility to give back.

During his adolescence, he was an active participant in student leadership, and was always interested in making a positive impact on society. In 2012 he gained a scholarship to study at United States of América. He studied Business, later Economy, and lastly, Political Science, focusing on conflict resolution. Although he was interested in the subjects, until that moment they were theoretical knowledge.
In 2008 he returned to Paraguay, with the idea of ​​starting his own business. At his free time, he decided to join Techo and was a big turning point in life. There he worked very close to families that were struggling to earn the very basic for a living and wasn't even enough. At this point Bruno decided to commit fully to promote transformative experiences for other young people as him and to develop the ways to change.

After the first experience with Techo, Bruno participated in 5 other constructions as a volunteer and later became CEO of the Techo organization in Paraguay. They moved from building 37 houses the first year, to a total of 3500 with Bruno as leader of the organization in a period of 4 years. From 200 volunteers, to 20,000 were added in four years and expanded to 3 cities in the country. The organizational budget also grew proportionally, reaching USD 1,000,000 per year.

After a while Bruno decided to leave Techo and create his own venture. It was at that time that he became aware of the concept of social enterprises and viewed it as the best way to promote development. He contacted his 3 current partners, all had different talents, and agreed on the need to develop a social enterprise that could generate thousands of other social enterprises. That was how Koga was born, with a very clear dream of impacting in Paraguay s welfare but a vague idea of ​​how to achieve it. Over time, they were able to develop a business methodology, to promote that dream that united them and that has grown uninterruptedly for 4 years.