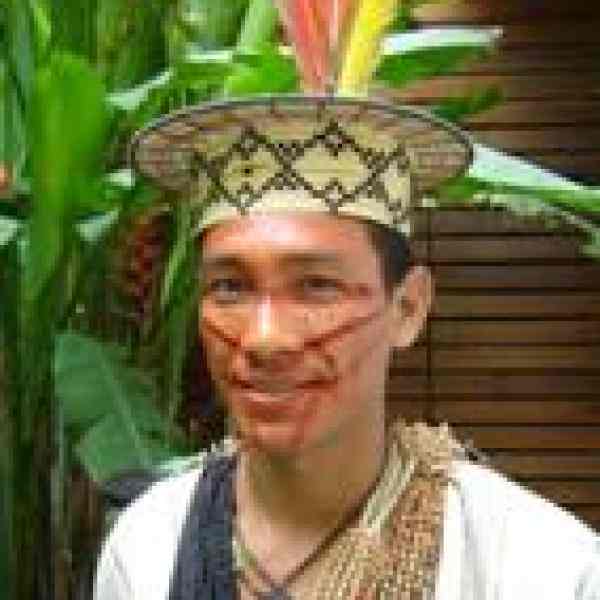 Benki Piyãko, leader of an indigenous community in the Amazonian state of Acre, is increasing the capacity of indigenous peoples to defend their land against outside exploitation. In the process, he teaches these communities improved land management techniques to both benefit from their natural resources and preserve a rich and unique ecosystem.

Benki is implementing a new model of land management and environmental protection in the Brazilian state of Acre. Acre, occupied mainly by indigenous people, contains some of Brazil’s most valuable natural resources. Lack of state-enforced regulation on extractive industries like mining and logging is threatening the land and the people that live on it. Benki has created a new role, the Agri-Forest Agent, to educate indigenous peoples about the long-term damage being done, and represent and defend them against outside interests. In addition, Agri-Forest Agents teach indigenous communities forest management practices that allow them to benefit from the sustainable use of their natural resources. Because they work with communities on an individual basis, Agents promote bottom-up, tailored strategies that are culturally and ecologically appropriate to each community. Benki has succeeded in having his Agents adopted by the state of Acre as government employees, and he is now working on replicating this position in other Amazonian states.  In addition to his work with communities, Benki has implemented mechanisms to unite Agri-Forest Agents in a broad network. This network allows them to share techniques and provides a common platform to influence public policy regarding indigenous land management.

In Brazil, the tenuous hold that indigenous people have on their land leaves them vulnerable to exploitation. Though the indigenous population, approximately 350,000 to 500,000 people, is a small percentage of the Brazilian population, it lives on some of the country’s most valuable land. According to the Socio-Environmental Institute in Brazil, 12.5 percent of Brazil’s 950m hectares belong to indigenous people. The majority of this land is in the Amazon. Outside forces threaten the intimate link between indigenous people and their land. Deforestation, mining, and logging all undermine the already limited power that indigenous people have over their main resource. According to Greenpeace, between 2001 and 2004 the rate of deforestation in the Amazon increased substantially: On average about 23,000 square km was destroyed each year, or more than six soccer fields per minute. Between 60 percent and 80 percent of wood harvesting in the Amazon is done illegally and is facilitated by illegal land occupation, invasion of public lands and protected areas, the opening of highways, and forest burning for the production of grains or livestock. To combat this increase in deforestation, the indigenous population has had to fight for legal ownership of their lands. Today these communities are becoming essential players in the protection of the Amazon.The Ashaninka tribe, also known as Kampa tribe, is one of the biggest indigenous groups in South America. The Ashaninka live on the border between Brazil and Peru, the majority on the Peruvian side, inhabiting an area of 91,200 hectares that is increasingly invaded by the logging industry. It has been difficult to control these incursions because Ashaninka land spans two countries, which have not successfully developed a joint protection plan. Ashaninka communities lack the tools and mechanisms to respond to this exploitation or defend themselves, receiving little support from the state. While the government should be doing more to defend the indigenous rights to land, the dependence of indigenous communities on outside aid and assistance is also problematic. Accustomed to the help of international aid organizations, these communities are not developing the internal capacity or strength to stand on their own or even act as equal players with these external institutions. Therefore strategies for natural resource management and protection are generally created by outsiders unacquainted with the culture or traditions of the region.

Benki has developed various strategies that all aim to empower indigenous communities to fight against illegal exploitation of their land and resources. Most notable is the creation of Agri-Forest agents that represent the interests of local communities and help protect these interests in negotiation with government and business. With the help of these Agents, Benki works to educate indigenous populations about environmentally sustainable development and build cross-border partnerships that can enforce regulations against corrupt extractive industries. Benki starts by mapping all the resources in Ashaninka communities, including plants, animals, and soil.  From there, he encourages communities to use this knowledge to think about how to manage their territories, defining activities that can be developed for internal sustainability and external trade. He promotes forest management practices such as collecting seeds to re-forest exploited areas and sustainable use of animals such as bees and fish. This process also helps identify new potential areas for economic development. He also builds community cooperatives to strengthen their capacity to participate in commercial markets. To facilitate this process in each community, Benki uses trained “Agri-Forest Agents”. He designed a training course for these Agents in partnership with the Pro-Indigenous Commission of Acre. Currently there are 110 Agri-Forest Agents working in 23 Indigenous Territories.Agri-Forest Agents serve many purposes, not the least of which is creating an avenue for dialogue between indigenous people and those exploiting their land. Agents help indigenous communities understand and talk about the invasion of their lands, which is the root of many of their problems, and then develop strategies to combat this invasion. One strength of Benki’s methodology is that his  model can be adapted to any indigenous culture, helping them develop while respecting the individualities of their communities and traditions.Benki’s system allows Agents working with diverse tribes to network with each other and share techniques and approaches. Many came together to form the Association of the Indigenous Agri-Forest Agent Movement, which represents the interests of indigenous people and negotiates with government, businesses, and citizen sector organizations. Recently, this association succeeded in convincing the state government of Acre to officially hire Agri-Forest Agents to work on community development in indigenous lands. In 2005, 69 Agents were hired and paid by the Acre government.  The Acre Secretary of Technical Assistance and Rural Development also created a special committee on indigenous issues in order to support the continuation of the activities Agents initiate in the communities. Benki is particularly adept at building partnerships to strengthen the potential of his idea and also to ensure its spread. With the Mayor of the city of Marechal Thaumaturgo, he has established Aiyoreka Antame: Saberes da Floresta, a forestry school for environmental education of representatives of the local indigenous population. The school also creates a space for dialogue between the knowledge and experiences of the local population and professionals from other areas. A youth exchange program has a similar goal: bringing young people from Brazilian cities to the Amazon fosters a better understanding of the realities of development and conservation, and seeds important links between those in villages and those in the outside world. By earning the support of government ministries and national and international citizen sector organizations, Benki has various avenues to replicate in other states the same strategies he is refining within the state government of Acre.Finally, Benki works directly on the battlefront for this valuable land. Since 2000, there have been various land-grabbing efforts by Peruvian loggers in the Ashaninka area, threatening the population and the ecosystem. Benki began mobilizing these communities to show the true effects of these invasions to the Brazilian and Peruvian governments. In 2005, Benki created the Trans-border Work Group (GT). GT’s goal is to construct proposals and a common agenda to ensure both countries’ governments guarantee the participation of indigenous people in the definition, execution and monitoring of development policies in the trans-border area. GT has created control posts and coordinates the supervision of the border area with representatives of the Brazilian and Peruvian governments. The group was able to pressure the Ministry of Exterior Relationships to redefine the Brazil/Peru border, replacing marks that had disappeared or been erased by loggers. GT’s work resulted in the imprisonment of 50 illegal loggers. Benki received the National Human Rights Award in recognition of the fight of his people in the defense of their land along the Brazilian border. This is also his bridge to communities in Peru and Bolivia.

At age 2, Benki was placed in the care of his grandfather, who baptized him Wenki (life warrior) and trained him to be a pajé (the most important figure in the community, who possesses deep knowledge of traditions and healing and uses this knowledge to help the community). Benki knew about everything that happened in the region, including conflicts over land, invasion by logging companies, and the drug trade. At the age of 10, his grandfather died, and Benki, already recognized as an important leader, assumed a central role in the village.When FUNAI started to talk about demarcation of land, Benki and his three brothers assumed a leadership role in the community and decided to launch a plan to defend their land. They created a council of 20 people including 10 young people in the community to non-violently resist the invasion of ranch owners.In 1992, Benki participated in the ECO 92 environment and development summit, which was the first time he left his land. He spoke in the name of many indigenous populations and surprised everyone with his maturity at such a young age. He raised many questions about the right to use land in accordance to indigenous culture, the problem with the way that FUNAI worked (a methodology that provoked the dependence of the indigenous people), the problem of land devastation and how the government was failing to enforce regulations and protect the region. During his journey back to his village, Benki passed through universities in the state of São Paulo to give a series of lectures and was introduced to new kinds of thinking and research on conservation and development. He thus returned to his village with the idea of creating a research project based on indigenous knowledge to preserve the forest. In the following months he dedicated himself to the research of all the species present in the regions (leaves, fruits, animals) and involved 12 young people in this work. This group isolated areas to re-forest. In two years the people saw the difference and became interested in doing the same work in other areas. Benki also founded a cooperative that produced diverse materials for sustainability and commercialization. In total, there were 85 different products, 45 of which are for commercialization. He exported similar environmental and development strategies to other villages suffering from exploitation by loggers.Benki has been recognized by a National Human Rights Award for his success in defending indigenous land rights through a Trans-Border Work Group that protects shared indigenous land across the Brazilian-Peruvian border. In 2000 Benki played a role in the creation of the Pro-indigenous Commission and assumed the presidency of the Agri-forestal movement working for the creation of the figure of the Agri-forestal Agent in the State of Acre.