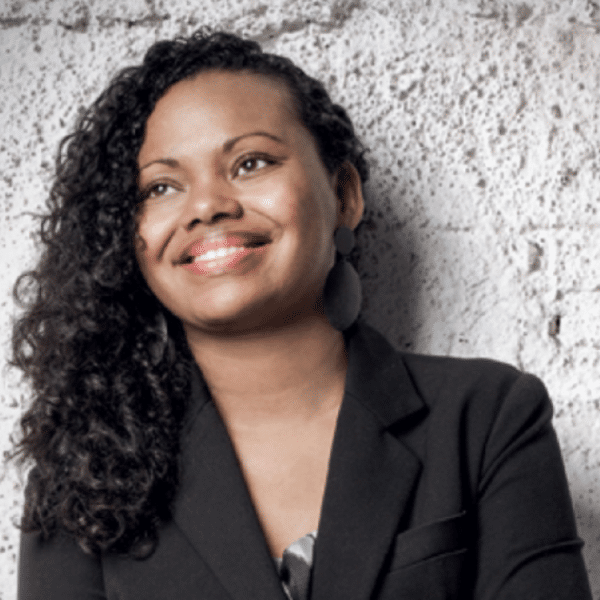 Adriana Barbosa is building a social and economic architecture to remove invisible barriers against black people at the corporate level to foster afro entrepreneurship in Brazil. She accelerates, connects and promotes afro-entrepreneurs while working with large companies to include them in their value chain.

In Brazil, Black people represent the majority of the Brazilian population and make up a majority of the small and micro entrepreneurs. However, on average their income is less than half of the average white persons and they are underrepresented in decision making at the local, regional and national levels. Over the past 16 years, Adriana has envisioned how to unlock the potential of Afro-Brazilian entrepreneurs. She began by building a physical, branded marketplace event - Feira Preta (Black Market) - to bring these entrepreneurs together, and today that event is replicated in various places around Brazil.

She is building an economic and social architecture that removes barriers in order to attract and retain a talented black labor force at the corporate level. By strengthening supply chain relationships between white and black owned companies, Adriana is creating a network of partners to scale black-owned Brazilian enterprises to a regional and global level. She is also encouraging the emergence of this kind of social and economic architecture in other Latin American countries, like Colombia, which also has a large black population.

Adriana’s work has a national reach and her initiatives have already generated an impact on legislation. In 2016, a municipal act in São Paulo was passed to provide funds for Afro-Brazilian entrepreneurs who want to set up and own a business. On the national level, a research programme was started to institutionalise a National Programme of Afro-Brazilian Entrepreneurship. She is also partnering with key stakeholders in the country - such as corporate responsibility networks - and abroad, mainly where there is a large black diaspora influence.

According to the National Sample Household Survey (2016), 54% of Brazilians declare themselves to be black or colored. Since the 1980s, the black movement has strengthened, resulting in several achievements for this significant portion of the population. Affirmative actions guaranteed access to higher education for black students and public policies for poverty reduction and income generation has had a direct impact on the Afro-Brazilian population. As a result, the racial divide in the labor market has shrunk in Brazil over time. In 2011, black and colored people had a turnover in consumption of 546 billions reais (about 136 billion euros), and in 2016 it rose to about 800 billions reais (about 200 billion USD), according to Etnus consultancy, the first Brazilian company specialized in the study of the behavior and consumption habits of the black population.

Despite these advances, the black population still represents the poorest and most marginalized part of the Brazilian population, according to the report of the Economic Commission for Latin America and the Caribbean (2014). They are still underrepresented in democratic institutions as well as in higher education and qualified jobs in a society of little social mobility. In the 500 largest Brazilian companies, only 4.7% of the executive positions are lead by black people, while at lower positions (interns and analysts) the proportion raises up to 58.2% (Ethos, 2014). In politics the picture is no different. Of the 513 federal deputies, 24 are black. Of the 81 senators, three are black. Of the 5,570 mayors, 1,604 are black. Of the 57,838 councilors, 24,282 are black. Of the governors of the states and The Federal District, none is black.
With lack of access to resources in the traditional labor market, the black population invests in entrepreneurship. The latest study on Micro Entrepreneurs released by the Brazilian Service of Support to Micro and Small Entrepreneurs (Sebrae) indicates that more than half of the small Brazilian entrepreneurs are black. Between 2002 and 2012, the number of black entrepreneurs grew 27%, versus a 2% reduction in the number of white people doing the same. Most of these entrepreneurs are black women.

A survey from Sebrae in Rio de Janeiro (2016) on Afro-entrepreneurship reveals that more than 70% of these enterprises lack physical spaces or virtual stores, and use fairs and alternative markets to show their products. Although there are a significant number of black entrepreneurs, there is still very little institutional incentive, such as call for proposals, long-term training, and credit lines geared toward these entrepreneurs.

The key to Adriana's work has always been based on two pillars: how black people produce and how they consume. She created Feira Preta in 2002 precisely as the missing platform to unite these two pillars. In the early years, Adriana invested in occupying the city and establishing in São Paulo the largest marketplace for products produced by afro-entrepreneurs and with African aesthetics in Latin America as an annual event. Around the fair, Adriana was building an entire ecosystem of Afro-Entrepreneurship in Brazil, qualifying both production and demand. Her methodology has been systematized and is now being implemented in several cities in Brazil.

She began to connect afro-entrepreneurs in a large network around Feira Preta which began to generate exchanges of multilateral experiences and opportunities for partnerships between black professionals from different sectors. Brands such as "Cresposim", "Acredita Benedita", "Pegada Preta", "Preta Pretinha" (all names with reference to black culture) and many others have become entrepreneurial references in the country. In addition to the creation and empowerment of a network of black microentrepreneurs, Feira Preta generated connections between black professionals in the advertising and communication areas. They began producing information based on African aesthetics and incorporating demands that had not been met by the mainstream media until now. She bet on the spread of social media to carry the message that blacks can and should produce and consume quality products. She reached a young black audience that was not recognized in TV commercials while sensitizing the non-black population to the invisibility of more than one hundred million Brazilians.

In 2009, Feira Preta was formalized as an Institute. Adriana created the first coworking in Brazil to accelerate the connection between afro-entrepreneurs, called Casa Preta (Black House). The initiative received support from the Spanish Agency for International Cooperation for Development and the Spanish Embassy. At Casa Preta she held a series of courses, exhibitions, and vendors selling Afro products, and also hosted other Afro-entrepreneurs. The Institute has also partnered with the Brazilian Service of Support to Micro and Small Entrepreneurs (Sebrae) through the "Preta Qualifica" program, which provides technical training for black artists, artisans and microentrepreneurs in Brazil.

Two years ago, Adriana created Afrolab, a national program implemented in partnership with Sebrae, and with the support of the British Council, Itau bank, Coca-Coca and others. Afrolab seeks to promote the diversification of the Afro economy through the expansion of innovative, viable and sustainable businesses. Through Afrolab, the afropreneur learns to develop sustainable business models and gains access to financial markets and services. Entrepreneurs can use these resources to lay the foundations of a successful business, and Adriana hopes to empower these Afro-entrepreneurs to be create partnerships with large companies.

Adriana’s strategy now is to take this movement to the next level in Brazil with the initiative called Black Codes, created in 2016. With this new initiative, Adriana is gaining direct connection to senior corporate executives in Brazil and their Human Resources hiring and employee retention policies; access to the corporations’ supplier partners and their internal procurement practices; and greater commitments by a growing number of corporations to buy products and services from afro-entrepreneurs.

Black Codes maps a company's diversity in terms of race and gender. Companies like Google and Facebook are implementing the methodology. Having key focal people in different areas of a company, the Black Codes promotes internal diversity in the corporate environment by focusing on human resources - search, selection, retention and valorization of talents. Adriana is creating a series of criteria that addresses racial issues so that companies can include it in their value chain. This approach is something very new in considering the value chain and bringing to the ecosystem of big corporations the need to look for products and services provided by afro-entrepreneurs that have never been incentivized before.

Adriana wants to go further. Since 2013, Instituto Feira Preta has provided a database for the network of afro-entrepreneurs who contribute their knowledge and skills to carry out their actions. With a collective and shared process, today she works with 20 collaborators who contribute to take the projects of the institute ahead.

Adriana participates in several national and international networks, among them the Afroinnova Network, created in Colombia. In this network, Feira Preta leads the discussion on the power of the global diaspora in the markets. She plans to expand Feira Preta and the experience of Afrolab and Blackcodes first to Colombia and after to other countries where there is a big Africa diaspora and/or historical connections with Brazil, such as Guinea-Bissau, Angola and Mozambique. In Brazil, she is the key reference to the Entreprise Citizenship Institute (ICE) in afro-entrepreneurship, and she is an active partner of the Ethos Institute and Gife, the two main company networks ito address corporate responsibility issues. She is also working on the licensing of Feira Preta brand so that companies can sell products certified with this label. Her next step will be to set up a virtual marketplace to bring together Brazilian Afro-entrepreneurs, something that does not exist in the country.

At the beginning of her adolescence Adriana came across one of the most cruel faces of Brazilian society: racism. Coming from a matriarchal family, she lived with her great-grandmother, grandmother, mother and six siblings in a middle-class neighborhood in São Paulo. The house was owned by her grandmother and had been bought with the help of her employers, with whom she had worked as a maid for life. By the privileged location she lived in, even though she studied in a public school, the presence of black students, like Adriana, was rare. In the activities of the student club, there were always less important activities for her to be responsible for.At parties, she was never invited to dance.

Racism made Adriana a shy person, but her matriarchal family made her resilient. She began working at 15, the same time she got to know African American culture references, such as Spike Lee and Malcolm-X. She found in black music parties that were emerging in the city an opportunity to connect with other black people and build and strengthen her identity. At 19, she learned to drive to work on a record company on the transportation of black singers to participate in TV shows. When she lost her job, she decided to entrepreneur.

Adriana packed her clothes and set up a store to sell at street fairs. She challenged the status quo of the São Paulo society by exposing her clothes in a primarily white neighborhood. She was robbed and lost almost everything. But she did not give up. She entrepreneur again. With a friend she decided to set up a fair where young blacks could produce and exhibit. At that time she was already using some skills she had learned at the public university she attended. That was how Feira Preta was created. In the first couple of years she had to face a petition from the white neighborhoods against Feira Preta. They didn´t want to have a fair managed by a black women with afro products at “their” square. She was forced to leave the square and moved to a private place, where she had to commit part of the entrance fee to pay for the rental. She was robbed and got a debt. Next year, she got a loan to make the fair again. Another debt and a depression, both not completely solved up to today.

In her career, she faced several challenges. Resistance from the region's residents, debts, prejudice. But, Adriana never gave up. In the time being, she turned Feira Preta into the ecosystem for afro entrepreneurship. She is now the reference of Brazilian Afro-Entrepreneurship, recognized in 2017 as one of the 50 most influential black personalities in the world by the Obama Foundation, along with two other Brazilians, both of them famous TV celebrities.