Tim unlocks opportunities for wealth creation for Black, rural entrepreneurs by shifting everything from their sense of what is possible through mutual support to finances. 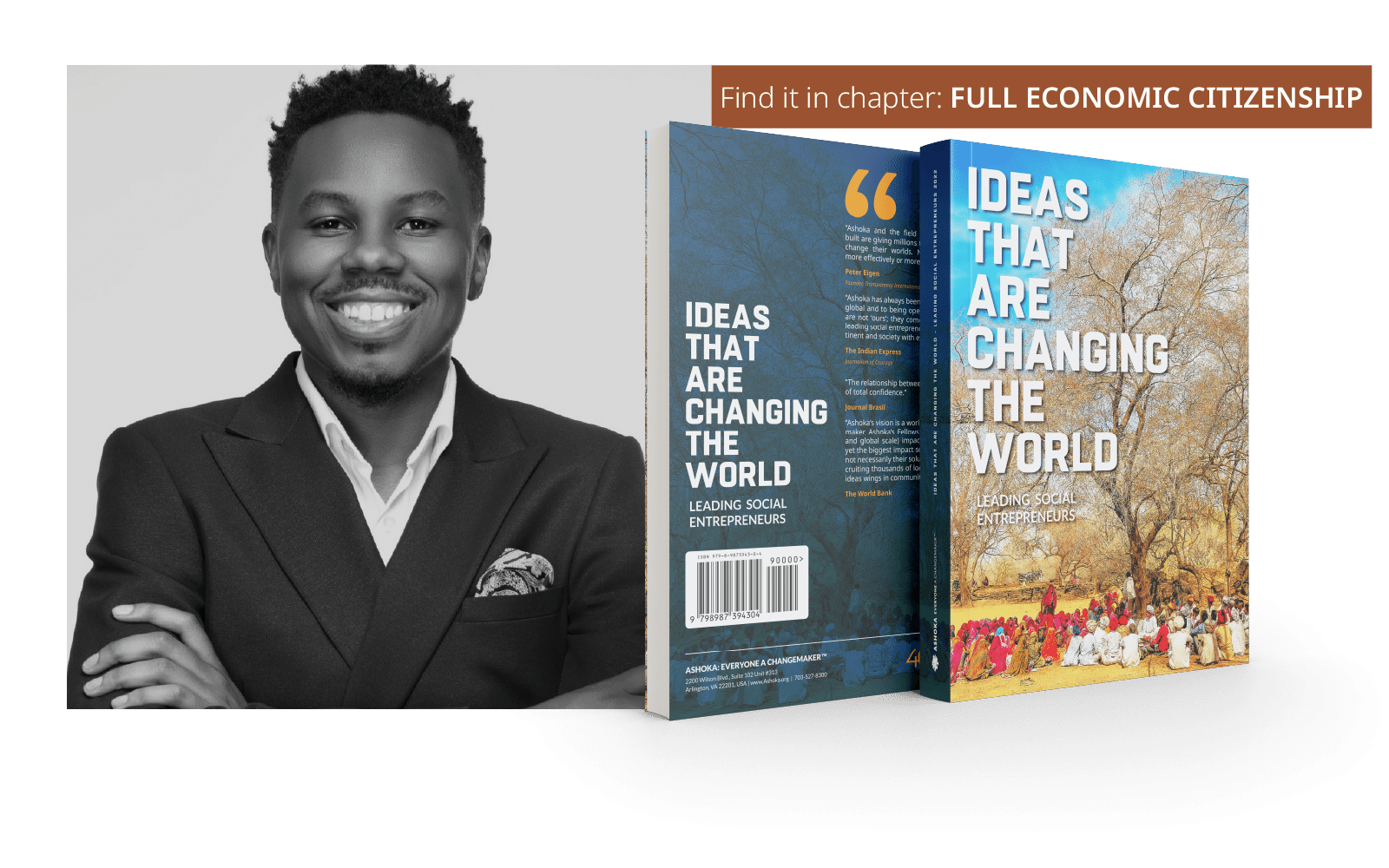 Tim recognizes that the current economic system is not working for everyone and that rural Black potential entrepreneurs are often unable to start businesses and generate family and community wealth because of barriers such as lack of capital and collateral. Through his organization, Higher Purpose Co., he is creating a state-wide community of Black entrepreneurs, artists, and farmers who support one another as a “new generation of local economy practitioners.” He strategically links this community with an engaged and transformed network of the full range of financial institutions and funders that collaborate and coordinate in new ways to build community wealth. Through these efforts, Tim is creating rural economic development for Black Americans to collectively build political, cultural, and financial capital and break the cycle of generations of economic injustice that have dominated the South.

Tim’s insights and a new approach are rooted in his experience in Clarksdale, Mississippi, a city of 15,000 in the heart of the Mississippi Delta. But the entrepreneurs he supports are scattered around the state. The funding network includes institutions from coast to coast. And demand for his novel approach is already international. Tim has created a model that can spread to other rural communities where economic opportunities that generate wealth, employment, and prosperity are missing and desperately needed. Leaving past patterns behind that does not address underlying systemic inequities, Tim and his work point us towards a world of collaboration with neighbors across sectors, leading to community knowledge and strength and broad, inclusive prosperity. This in turn points to economic, social, and political change and revival across rural America.

The development of personal wealth and capital in the U.S. is mostly driven by business and home and land ownership, all of which have been historically limited for Black communities in America (and federally subsidized for middle-class white communities). In 2020, The Washington Post reported that the homeownership gap between Black and white Americans is larger today than it was in 1934 when the Federal Housing Administration was established. This legacy of wealth disparities has been compounded by a lack of investment in rural and Black, Indigenous, and people of color (BIPOC) communities, resulting in neighborhoods that are underfunded and overlooked.

Both (1) Jim Crow and (2) a finance system that has systematically undervalued Black neighborhoods and therefore properties have terrible, deep consequences. The power of mutual help and a deeply changed financial system is needed to reverse course.

This work of bringing a community together and then helping it unite to drive toward a big, bold, and collective vision takes talent and time. There is an urgent need for organizations that have long-standing, rooted, and locally committed teams with social capital and knowledge of how their community operates. And yet local teams with years of experience, energy, and support to maintain momentum and morale are exceedingly rare in the rural economic development sector. In fact, this underperforming sector has a way of repelling energized, entrepreneurial talent (who generally conclude that they can do better venturing out on their own and starting businesses, rather than helping other aspiring entrepreneurs make a go of it).

Tim experiences all these challenges in his life and works in the Mississippi Delta. And yet he’s not about to jump ship, either by going solo or moving away. This is where Tim was raised, and where he realized an idea for how to help lead his community toward collective wealth and prosperity.

Tim has developed a comprehensive model for economic transformation that builds on the strengths of potential local changemakers, gets funders unstuck, and lever-ages the untapped assets of changemakers and funders alike to create better systems that work towards the goal of shared prosperity. Notably absent from Tim’s model is dependent on prior wealth or access to capital as a measure of someone’s promises, trustworthiness, or creditworthiness.

Tim’s core belief is that Black entrepreneurs need access to opportunities and capital in order to thrive. Higher Purpose Co.’s (HPC) clear focus here has allowed it to successfully serve 1,500 Black entrepreneurs, farmers, and artists to date, many of them Black women. They statistically have earnings far behind white men and women in the U.S. HPC’s new membership work currently serves 200 Black entrepreneurs and aims to increase this number to 300 this year.

And yet, unlike traditional business accelerators or incubators, HPC isn’t fixed on the number of individual businesses, or on a few individual break-out success stories. In addition to providing more traditional resources for emerging entrepreneurs, Tim believes that community-based knowledge and encompassing cultural and historical contexts are crucial to building collective success and a  collective economy.

The programming that Tim and HPC provide benefits, individual entrepreneurs, while also reinforcing the overall regional business community. The Higher Purpose Business Fellowship is the first organization for Black entrepreneurs in Mississippi. It begins with a six-month program for emergent Black entrepreneurs. Cohorts can learn about entrepreneurship through community building and partnership investments. Immersion trips to cities like Jackson, MS; Montgomery, AL; and Selma, AL, have resulted in community-based research and policy education for Black Southern residents. These programs serve as a launchpad for creating local businesses and relationships. They also provide a space for community reflection around the systemic policies and structural barriers that have limited collective prosperity in the Black community for so long, and how to collectively build communities that thrive. And that’s exactly what happens next.

The work of spotting new business opportunities, making connections, doing business with peer organizations, and weaving all this together is central to the success of HPC and its members. For example, an HPC business member with a successful juice bar business in Jackson helped another entrepreneur within the membership set up their own store in Greenville (2 hours north and outside their target market). Entrepreneurs working as midwives, childcare providers, educators, photographers, chefs, nurse practitioners, and more share resources through membership meetings. They also signal to the network where gaps – like mental health support — might be filled by HPC up-and-coming entrepreneurs.

An intelligent connected and coordinated network stands a far better chance of interfacing with and influencing the current system than individuals.

This collective intelligence and peer support de-risk the individual enterprises. This value is not lost on funders — another obvious stakeholder in asset-building programming who have long been disconnected from rural Black communities.

HPC is building a vetted and engaged network of funders (the “Funding Network”) who are eager to do business with previously overlooked (they might say “untapped”) community members. HPC provides services like capital matchmaking, application packaging, and customized business growth support to help funders and local entrepreneurs alike get acquainted. HPC then helps their members navigate the full ‘capital stack’ of grants, small zero-interest loans, low-interest loans, and venture capital that the Funding Network brings to the table. This allows HPC – or any other organization adopting this approach – to act as a status-quo-shifting intermediary, creating capital blueprints for businesses that acknowledge and meet the entrepreneurs’ and funders’ changing needs over time, with fewer unknowns, less friction, and support throughout.

In addition to linking their entrepreneurs with banks and funders, HPC has also been successful in raising funds from national impact investors and philanthropic investors. They offer loan guarantees, helping funding Network members overcome the hurdles of pre-existing capital or collateral. HPC can also facilitate zero-interest loans through their partnership with Kiva, as the region’s first Kiva Hub. And HPC’s own fundraising has allowed them to deploy over $1 million in affordable capital to date to Black entrepreneurs across Mississippi. Paired with the fact that Tim has been able to effectively col-lateralize peer support and collective intelligence, HPC’s ability to fundraise flexible capital further contributes to a guarantee system that ensures even risk-averse funders can do more business with HPC’s community entrepreneurs.

The experience of funders has been so positive that Tim and team have found they can apply even more lever-age, asking for better terms or at least more accessible processes, like common applications and tweaks that streamline application processes (limiting the number of in-person meetings, printing, and scanning) in a way that acknowledges the experience of their entrepreneurs, like farmers and hourly workers for whom the current system is too inflexible.

The HPC idea is also catching on and being replicated in other rural communities, such as Little Rock and Bentonville, both in Arkansas. Tim has also spoken to colleagues in Canada about replicating the model there, ensuring that this concept of “wealth creation” is beginning to be reimagined in communities across the North American continent. Non-profit community-based economic justice organizations will be a key component of Tim’s spread strategy, and he’s finding that they have many of the ingredients necessary to adopt and deploy this much fuller and now-proven model. It may only require a few tweaks to center collective wealth and coordinated business practices in these groups, and then they too can build funding networks, capital blueprints, loan guarantee funds, and unlock economic opportunities. While it requires time and effort, the outsized value that supports organizations operating in this way significantly de-risks investments and can translate into more options for funding, even without existing capital or collateral. Through this approach, Tim is helping communities crack open the current wealth-creation system so that it finally works for those who need it most.

Tim and his team are committed long-term to the work of interrupting inter-generational poverty. To stay the course, they prioritize team well-being, professional development, and tenure. And as Tim starts to formally share and spread the model far and wide, he and his core team are setting down roots in the Delta by developing a large downtown Clarksdale hub for a range of uses, from HPC operations and programming to mixed-use venues for their up-and-coming entrepreneurs.

Tim’s family history has deep roots in Mississippi and the Delta region. While he was born in Chicago, he was still in grade school when his family moved back to the region. Tim decided to stay close to home and attended Mississippi Valley State University, which helped him to understand the significant role of African Americans in the world. Following college, Tim had hoped to find his footing in the private sector in Alabama. Yet, after talking to family and a close mentor, Tim was inspired to move back to Mississippi where he felt he could have the most impact.

Once he returned, Tim began a consulting company and contracted work that had him directly engaging with the Mississippi public. In this role, Tim was able to work with Delta State University on a USDA grant, where he assisted business owners across five counties in the Mississippi Delta. This experience of “apprenticing with the problem” and learning all about the barriers and systemic flaws motivated him to apply for a development role at a local community development financial institution. During his time working at a local CDFI, Tim and his team distributed over one million dollars in funding for community-based projects related to tourism, housing, youth engagement, public safety, and arts/culture. After talking to community members and hearing stories from his fellow neighbors, Tim was inspired to create a small business program. While the CDFI (currently an HPC partner) did not initially see how this would be possible, Tim’s idea then became the blueprint for Higher Purpose Co. which would transform community wealth within the region.

Tim is inspired by and honored to serve Black entrepreneurs, farmers, and artists in the pursuit of economic justice, reparations, and building community wealth for current and future generations of rural residents. Tim has a deep contextual understanding of the Delta’s histories, people, and potential. Rather than abandoning it, he is determined to see it flourish. In a time when so many are told to leave for the city and coasts, Tim is opening a door for future generations to develop rural communities through the deep knowledge and power that they hold as residents.