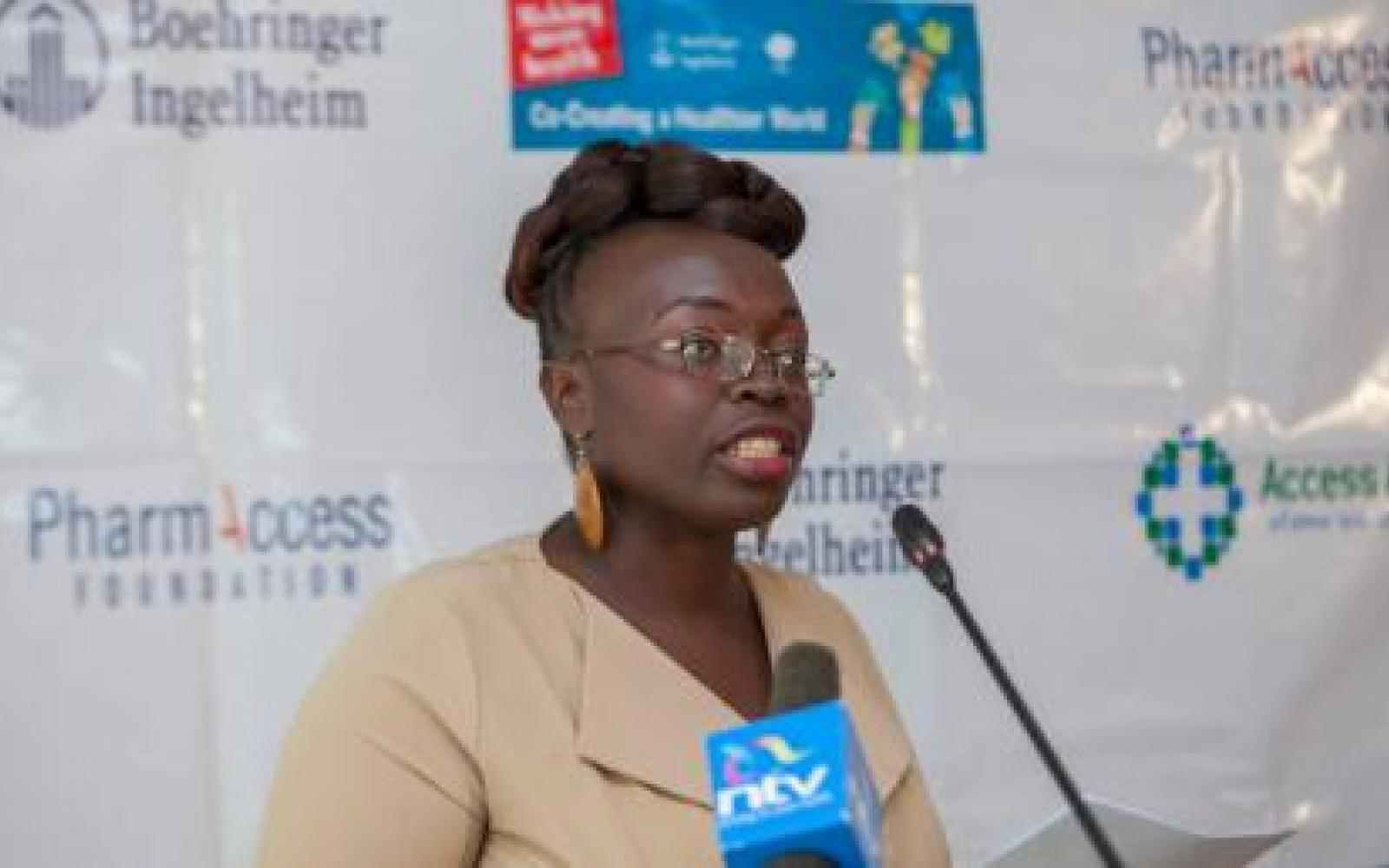 When starting out on social intrapreneurial initiatives, prototypes and pitches are two potent tools for advancing past the early stage of innovation. Pitching is a critical communication skill for getting needed buy-in and investment for an idea. A pitch must be compelling, clear and contain a strong call to action. Prototyping brings the innovation idea to life, getting momentum built by producing an early stage version that allows for testing and feedback. This module will review best practices of both, and provide resources to for those ready to get started.

Guy Kawasaki was an intrapreneur as “Chief Evangelist” for Apple during its breakthrough years in the late 80s and early 90s. Kawasaki has since become a venture capitalist and professional public speaker, also writing two books that are applicable to the social intrapreneur “Art of the Start” and “Enchantment“.

In this 2014 TedXBerkeley speech, Kawasaki goes over his keys to innovation.

2) Understand: What is Prototyping?

Prototyping is a powerful way to advance social intrapreneurship. A prototype is an early stage version of an idea that generates evidence and proof of incepting without using significant resources or time. A prototype allows an innovation team to compel colleagues to imagine the impact. It is also a way to surface risks and determine potential pivots before investing in a more comprehensive piloting.

Read: This report by Nesta entitled Prototyping Public Services: An Introduction to Using Prototyping in Development of Public Services to get a better sense of how this process applies to projects inspired by social impact. Nesta is an innovation charity with a mission to help people and organizations bring great ideas to life.

Want to apply your new intrapreneurial skills to real-world problems? Here’s your chance to do it through collaborative group work and crowd-sourced solutions. Want to know how?  Follow these steps:

For additional resources on pitching check out: Changemakers Guide to Pitching

For those in the NGO/Nonprofit space, here are some additional tips specific for pitching to donors and partners: Pitching your Program to Prospective Partners and Funders

Ready to start the prototyping process? Check out this guide by Nesta which outlines the prototype process step-by-step.

For a comprehensive view on the early stage design sprint associated with prototyping, check out: Google Ventures resource guide for basic design sprints

The Art of Innovation: TedX Berkely

In this 2014 TedXBerkeley speech, Kawasaki goes over his keys to innovation. As you watch, analyze not only the content but the presentation and storytelling style of Kawasaki.

Pitching your Program to Prospective Partners and Funders

For those in the NGO/Nonprofit space, here are some additional tips specific for pitching to donors and partners

Ashoka has derived best practices for pitching from its network of fellows and innovators. This guide will help you in preparing and structuring your pitch.

The Product Design Sprint: A Five-Day Recipe for Startups

There are various methodologies for prototyping social impact products. At the forefront are Stanford D.School’s Design Thinking (also championed by IDEO)  and the Massachusetts Institute of Technology’s D-Lab Appropriate Technology approach. Some of the best features from both are brought together in this Do-It-Yourself guide from the Google Ventures group, which “helps entrepreneurs to change the world”.

“We’ve curated a collection of resources from our classes and workshops for you to explore. Use these activities, tools, and how-tos as a starting point — we hope you’ll hack them for whatever challenge you’re working on.”

Read about a “hack-a-thon” prototyping process pioneered by Skoll Global Threats which creates early-stage health innovations through a three and half day workshop format.

Use this toolkit to find out whether you are ready to start prototyping and then to go through the process.

Creating change isn’t just the work of idealists or people starting companies. Our towns and cities, schools and workplaces come alive thanks to people like you. People who care. People who see past the problems to the solutions. The fixers. The doers. The slightly restless. The somewhat kooky. 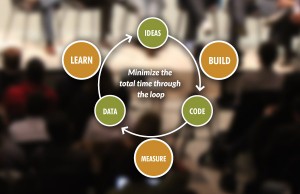 When social intrapreneurs begin the process of taking their problem statement and developing a real world solution they need a way to quickly and consciously see if they are setting out in the right direction . A very close cousin to the prototype, an MVP or minimally viable products (or program, proposal, etc) is an agile way to test if an innovative idea has potential. The viable is key to this, in that the MVP says yes we have to consider working in the context of limiting resources as much as possible and creating only the most essential parts of our idea, but we also need  to make something that will demonstrate a complete innovation. One of the temptations with the MVP approach is to build a bridge that only goes halfway across a ravine and then to distribute it so you can get iterative feedback. The feedback amounts to “this bridge will never work” even if a bridge across a ravine is a brilliant idea. Without the end-to-end experience or understanding, the innovative ideas simply feels broken or nonsensical to the benefactor or, in the case of the bridge, very dangerous.

Before you start: Consider the options and set expectations

s you generate an MVP plan, do some quick research on search engines to see if anything similar exists or what might be adapted quickly. For example, the first version of UNICEF-GIS, a mapping platform used to empower youth to take action on environmental hazards, was a very basic adaptation of the MIT Mobile Experience Locast App which was being used in Italy to create tourism maps. It wasn’t perfect, but had the functionality we needed. While that first UNICEF-GIS MVP was extremely buggy, the early youth testers understood its purpose and worked around the bugs to locate environmental hazards onto a public map and advocate successfully for mitigation. The MVP depolyment demonstrated proof that trained youth using mobile phones to report environmental risks onto public maps would indeed result in action. It also gave us a lot of critical direction on how to make the platform better with our limited technology development budget.

Setting expectations with your internal stakeholders is also key to success with MVPs.  You must fights back against the temptations from others to frame the MVP as a nearly complete product. Not setting proper expectation will make your vulnerable to colleagues who might have a predisposition to be against your idea, they will point to its shortcomings instead of the promise. 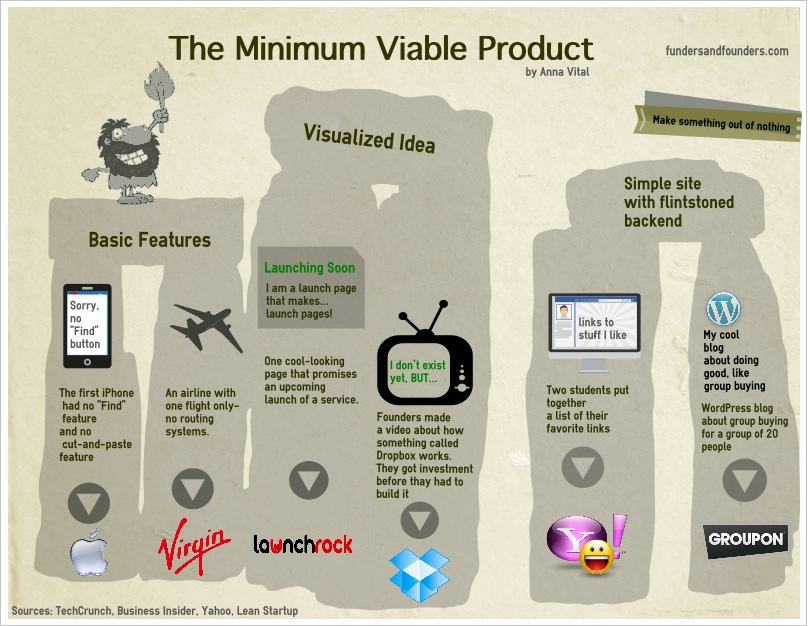 In the TechCrunch infographic there are a number of examples of MVPs. The first iPhone did not incorporate every feature idea that was deemed of value to ensure a market demand before larger scale product investment. Dropbox famously released a YouTube which demonstrated how Dropbox cloud storage would work before they even had a working prototype. After over 250,000 views in a matter of days on the video, they quickly built out their cloud storage service. Groupon’s MVP was a deals blog, when enough people viewed and joined the blog, they pivoted into a full fledged service.

At the end of testing an MVP you are ultimately faced with one of two decisions. Pivot, use the evidence and feedback created by your MVP to adapt or change your idea in a different direction, or preserve, the feedback from your MVP was so positive that you should preserve and continue on your current project path.