Introducing Literacy from the Lowest Point to South Kalimantan with Alvian 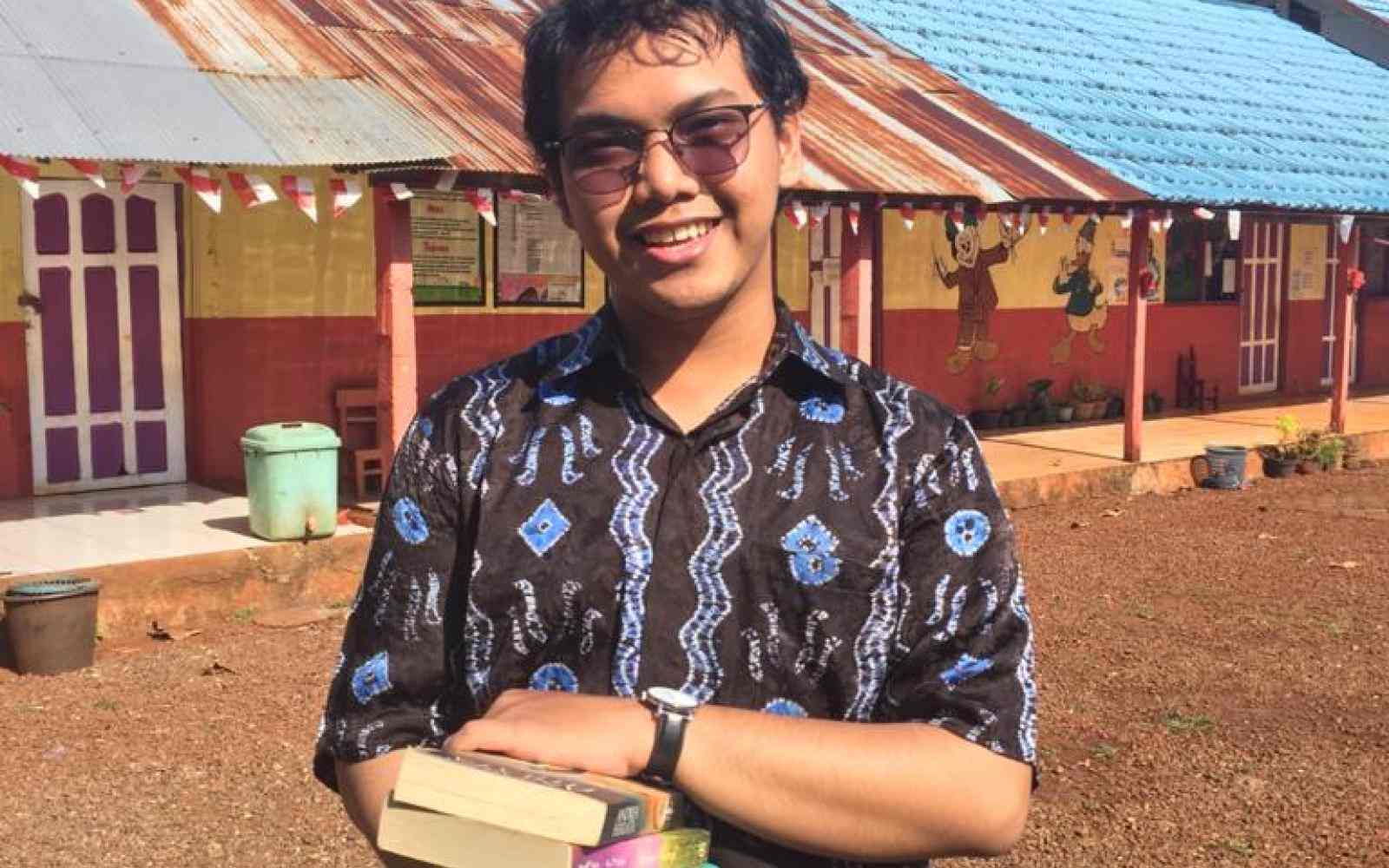 Sometimes being looked down on can be painful. But for Alvian, it’s a different story. Being looked down upon encouraged him to become who he is today, and it has become the primary motivation for the initiative he started in his rural village, Banua.

After being looked down upon in a province competition due to his status as a kid from a rural village, Alvian decided to change the game and people’s perspectives on those from rural villages. It was important that Alvian known his own worth and potential, and with the belief that all kids are equal, regardless of their status, Alvian knew he had to make a change.

A moment of realization: where it all started

In 2018, Alvian Wardhana introduced literacy activities to rural villages in South Kalimantan. To begin, his team made a simple game with introductions written on paper. But after he passed the papers around, Alvian noticed a few third graders struggling to read the instructions.

From that moment on, Alvian realized that literacy and education are important issues that require a lot of solutions and hard work to be resolved. We know that reading is a crucial skill, and Alvian could see that too. Therefore, he was moved to change the status quo and help kids gain the crucial skills they need to boost their potentials.

Alvian realized that there was a big gap between rural and urban areas in South Kalimantan after attending various competitions and seeing the facilities that people from urban areas had access to. He also realized that rural village children needed extra attention from parents and teachers, judging from the conditions they’ve been through as rural children with financial and life issues.

In March of 2018, along with 5 of his friends that often participate in many national competitions and championships, they stopped for a moment to look back on how South Kalimantan ran its education system. They realized that it was the right time for them to give something back to South Kalimantan by making a movement for the children. From that, they started Literasi Anak Banua.

Literasi Anak Banua is focused on providing literacy education to kids in South Kalimantan, and it aims to close the gap in their education system.

Its team members were spread across 17 villages where they organized tutoring services and other activities in each village. Through a distributed leadership system, each member had the power to decide their own schedule, design study materials and delivery methods, as well as develop new ideas to improve quality of education in their area. Today, with the spirit of gotong royong (co-leadership towards a shared vision) in mind, Alvian collaborates with other youth organizations and involves as many teachers, volunteers, and youth in the villages as possible to become integral parts of the initiative.

How does Literasi Anak Banua Work?

To close the gap in the education system, Alvian decided to give free academic and non-academic courses to kids in the village twice a week in order to deepen their interest in academic learning and extracurricular activities like poetry and storytelling.

This model of learning happened due to his concern that children in rural villages don’t get much support from their parents. Instead of supporting them in their education, their parents thought it would better for children to help in the fields. Some kids thought that working in the fields was more fun than learning subjects in class that they perceived to be boring. Therefore, the idea of mixing academic learning with non-academic courses and extracurricular activities happened. With this, children could explore a lot of subjects, understand their potentials, and have fun along the way.

And it worked! The kids loved the learning model and ended up sticking with the project and the lessons. Consequently, the movement continued to grow from there.

Aside from that, Literasi Anak Banua also gathered books and created small libraries around the rural villages in order to improve the children’s literacy. Having such resources also helps children get access to knowledge, even when their tutors are not around.

As the initiative grows, Literasi Anak Banua also serves as a platform for young people to collaborate and create more social good in their community. From time to time, they organize fun activities that create access to quality educational materials and school supplies for remote villages, including:

Other challenges along the way

It can’t be helped that Gen Z is often seen as a generation of changemakers. But unfortunately, old people may limit its potential.

After that instance of being looked down upon at a province competition, and the moment when he met children who couldn’t read, Alvian came across another problem. The Literasi Anak Banua team were told that they were too young to handle the movement and teach children. From stakeholders to the organization in the village, their help was often rejected—especially in the first rual village they visited. But Alvian knew well that it was he and his team’s job to change the game and close the gap. He believes that they can help make these children’s dream come true.

Similarly, in the first village they visited, there’s a non-formal Al-Quran learning organization for kids that felt Literasi Anak Banua would distract kids from studying the Quran. In response, Alvian told them that from long ago, reading is also what God told mankind to do. Alvian showed them a lot of videos as a proof of how important this movement is for children in the rural village. He successfully convinced them about the importance of Literasi Anak Banua without causing conflict.

Not too long after that, changes rippled across the community outside of the team behind Literasi Anak Banua. Kids from other villages increasingly expressed interest in this movement and started to make their own. This is what Alvian aims for: that change doesn’t come only from his side, but also from the villages and the other people who have potentials to help and invest their energy.

There was one time when Alvian went to a village where the kids were gathering rocks. He asked them about their dream jobs in the future. They said they wanted to be doctors, teachers, etc. “Those are big dreams,” Alvian thought to himself. He couldn’t help but ask, “why do you guys believe in that dream?” They answered, “because we have you (on our side).” In that moment, Alvian knew that he was on the right track.

The bright side of the road

After three years, Literasi Anak Banua has covered 17 villages in South Kalimantan and has successfully encouraged around 1,800 children to read, learn, and reach their potentials. The third graders whom Alvian met in the beginning of his journey are able to read and study the materials at their current grade levels. Some of the students were also selected for a national-level competition. Beyond academic achievement, Literasi Anak Banua programs have helped children become more open-minded in analyzing situations. There was a time when Alvian saw some students bullying a friend with a disability. He approached them and invited them to join the program. As the children participated in Alvian’s tutorial classes and activities, they gradually developed an inclusive point of view that respects the differences of their friends.

And now, Literasi Anak Banua has 40 young volunteers on their side. The movement is still growing and openly accepted in many villages, with the hopes of improving education in South Kalimantan. The gaps are closing but Alvian is not satisfied yet. Alvian says, “create the change, no matter how small it is. Prove that our generation can be that changemaker.”