In West Africa, in most communities, as it is around the world, mental illness is still very much misunderstood. It is often attributed to a curse or being tormented by evil spirits. The situation is worsened by the critical shortage of qualified mental health practitioners. Seeing the impact and suffering of those living with a mental disability, Gregoire invented and spread a new system of grassroots outreach, care, and full reintegration. 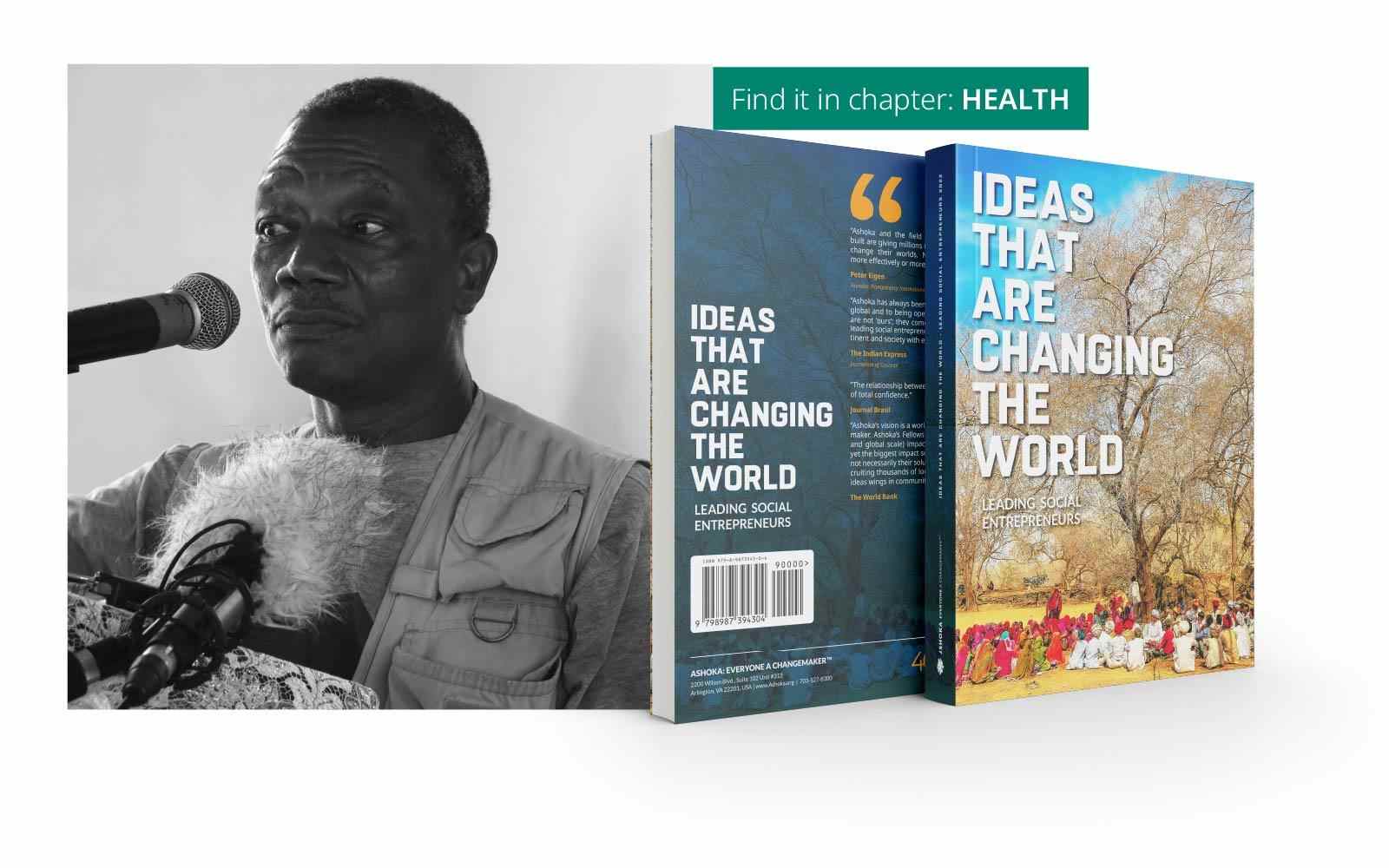 For over 30 years, Grégoire Ahongbonon, a former mechanic from Benin, has developed a new broad-spread system that spots, helps, and re-integrates the ten percent of the population suffering from a mental illness. From being stigmatized and isolated, they can recover their dignity and reclaim their lives. Rejected and forgotten, many people with treatable illnesses like epilepsy, bipolar disorder, schizophrenia, and even depression end up chained to trees or in their homes, or are left to wander the streets, without proper clothes, searching for food in the trash.

Grégoire, and his organization, La Saint Camille Association, have created a model, high impact, highly economic system of care that is needed widely across the continents. It transforms the lives of people suffering from mental illness and has contributed to changing public understanding. It points to where all health care must go.

As Grégoire and his team travel across West Africa, they are on alert for reports of mentally ill people who are shackled or mistreated in remote villages. When they find such individuals they offer to take them to one of the reception centers they have established, where they receive food, shelter, a diagnosis from a psychiatrist, and access to treatment and medication. At these centers, they are surrounded by caregivers who ensure they receive medical care, affection, and help in reestablishing their self-esteem. Based on the patient’s personal progress, and after some months, many individuals are directed to training centers in the community to learn an occupation and begin reintegration into normal social life. A network of drop-in centers and relay centers help to ensure that medication and medical follow-up continue. Family members are often a part of these processes, and they become advocates as they see the results and become educated on the facts regarding mental illness.

Through Grégoire’s unwavering tenacity, more than 100,000 patients have been released, cured, and rehabilitated through the more than 20 Centers he has established across Ivory Coast, Benin, and Burkina Faso. La Saint Camille continues to expand into new territory and to build its capacity to provide an alternative for people with mental illness. Many staff members (cooks, managers, nursing assistants, and nurses) are former patients who have benefited from the care provided at La Saint Camille. Several of the centers are now even directed by former patients. Grégoire has proven that people with mental illness can live normal productive lives with proper treatment. The success of his approach has led family and community members to eagerly share the results they have witnessed with others across West Africa. This recognition has spread to the extent that it has almost eliminated the demand for alternative centers, where one might previously have found as many as 150 individuals with mental health issues chained to trees.

With facilities also in Ivory Coast and Togo, St. Camille fills a gap across West Africa in mental healthcare provision, left by the state and even the humanitarian sector, said Dr. Jibril Abdulmalik. [Founder and CEO of Asido Foundation/ consultant psychiatrist at the University of Ibadan in Nigeria

The Société Africaine de Santé Mental (SASM) has estimated that 10% of the African population has some kind of mental disorder. When it comes to health care, the highest priority is given to diseases like AIDS and malaria. The World Health Organization (WHO) noted that while in Europe there is one psychiatrist per 1,000 inhabitants, in Africa, the ratio is one psychiatrist per 5 million. The entire country of Benin (population 12.45 million) has one psychiatric hospital, while the Ivory Coast (population 27.5 million) has two. Patients and families must pay to be treated in these facilities. For the poor, there are no psychiatrists, no facilities, no treatment, and no medicine. Instead, there are only traditional remedies, fear, stigma, taboos, and widespread misunderstandings associated with mental illness. According to SASM, in 43% of such cases across Africa, family members consider that such illnesses have a mystical origin, with only 12% of cases finding their way to trained therapists.

Grounded in his own life experience, Grégoire came to a realization of how fragile human mental health can be, and how in the absence of support, devastation could easily follow. In 1990, he became deeply concerned for the fate of the mentally ill people he saw wandering abandoned, and alone. He decided to confront his own fears and begin approaching them. Every night he would walk to observe their condition and to see where they were sleeping and what they were eating. Together with his wife, they bought a freezer to keep food and fresh water, which they began distributing in the evening to the mentally ill people, creating a bond of friendship.

Gregoire soon realized that they also needed a place to sleep soundly, so he met with the Director of Bouaké Hospital, who agreed to give him a small abandoned space in the hospital to gather the first patients for treatment and provide them with necessary medication. Quickly, many of these patients began to improve. It was the first time in Côte d’Ivoire, that a general hospital had treated mentally ill patients.

The hospital director, intrigued by Grégoire’s actions, took advantage of a visit by the Minister of Health to the hospital of Bouake to share the experience and build ministerial-level support for widening the scope and impact of Gregoire’s work. Over the next few years, Gregoire then developed a tiered system of centers – (1) Relay Centers to identify mental health patients and negotiate their consent or safe transportation to (2) Care Centers for treatment, and (3) Training/Reintegration Centers where the patients learn skills that allow them to be financially independent, build relationships and reintegrate into their communities.

Grégoire has also set up relay centers (mental health care clinics), which are led by nuns. Each Care Center houses around 200 patients. The nursing staff is primarily composed of former patients, thanks to nursing courses that are paid for and arranged by La Saint Camille. A mobile nursing team conducts a quarterly tour of each center with the supervision of local and foreign psychiatrists associated with Saint Camille who prescribe medicines and provide clinical reviews of new or challenging cases. While public systems do not have the capacity to treat mentally ill patients, Saint Camille has built a voluntary system of care that serves the local population for free or in some cases for a small fee.

Former patients have become ambassadors in the fight against the rejection of people suffering from mental disorders. Grégoire has also conducted national and international conferences on mental health. His relentless approach has helped him develop vital partnerships with the church and state leaders, and has earned him a dynamic group of friends at Saint Camille composed of volunteers including visiting psychiatrists who help train the nurses and others who carry out awareness campaigns and fundraising activities to provide human, material and financial support.

Thus far, Grégoire has opened 8 reception and care centers, 28 relay centers, and 13 training centers in Côte d’Ivoire, Benin, and Burkina Faso. Grégoire and his organization are currently interested in expanding to Togo where the first reception center is already under construction, and plans are in the works to expand to Nigeria.

Grégoire Ahongbonon is a truly remarkable individual and just the kind of leader that the Chester M. Pierce Human Rights Award was designed to honor,” said APA President Vivian B. Pender, MD, in a news release. “Guided by his own fierce humanity and his personal experience with mental illness, he has made compassionate care for individuals with mental illness a reality throughout West Africa

Although he did not study medicine, Grégoire Ahongbonon has become an important figure in the delivery of mental health services in West Africa. Originally from Be-nin, he emigrated to Ivory Coast and opened a tire repair business. His business became prosperous but then suddenly declined, leaving him bankrupt. Debt-ridden, this father of six children sank into a great depression and found himself deeply troubled with suicidal thoughts.

With the support of a Catholic priest, Grégoire went on a pilgrimage to the Holy Land where he rediscovered his faith and regained equilibrium in his mental state. Grounded in his faith, he set out on a mission to help people like himself, who were struggling with mental health issues, be healed. He began visiting patients in hospitals offering what assistance he could and visiting prisons to talk with the prisoners to bring comfort.

With the unwavering support of his wife, he founded the association Saint Camille, and made the promise to end the suffering of people with mental illness and restore their dignity. Guided by his faith and by an absolute commitment to the mission of Saint Camille, he traversed the streets to unchain and tend to people with untreated mental illnesses. For Grégoire, it is unacceptable, in the 21st century, to find people shackled to trees due to a mental affliction. “As long as there is one man in chains, it is humanity who is chained. Because when I see a man or woman tied to wood or in chains, I see my own image and the image of each and every one of us.”

For almost 30 years, Gregoire Ahongbonon, a former mechanic from Benin, has helped thousands of West Africans affected by mental illnesses, caring for them in residential centres run by his charity, the Saint Camille association. Above all else, he is determined to stop the practice of keeping mentally ill people in chains