Redefinitions and Reductions in Harm 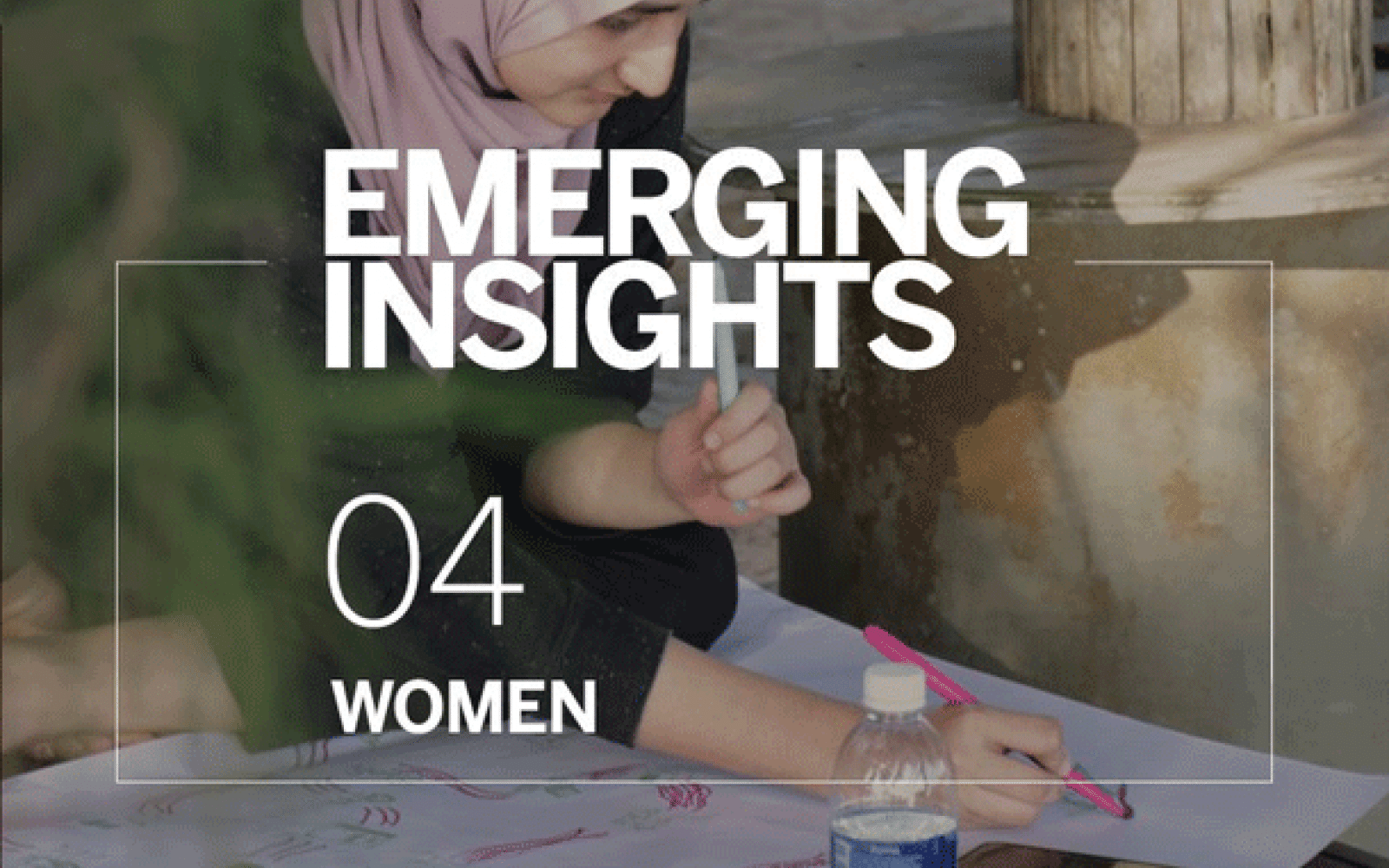 The #MeToo movement and Women’s March have had ripple effects globally, and women’s right and grassroots women’s groups are challenging narratives around the world.[1] And it can sometimes seem like women around the world have made great strides to increase their presence in the business and political spheres.

But challenges persist in ensuring equal rights and protections for women everywhere. Barriers to full economic advancement persist into adulthood where women face discrimination in hiring, restrictions on mobility, lack rights to control income and own property, and bear an unequal share of unpaid care work. The world is and continues to be unsafe for many women – an estimated 70% will experience physical or sexual violence in their lifetime, and 15 million adolescent girls (between 15 and 19) will have experienced forced sex at some point in their young lives.[2] Initiatives to counter these realities require more comprehensive approaches to secure women’s livelihoods and engage women as co-leaders in their advancement.

Women are the key to transforming leadership in the world. The traits that embody leadership for systemic change are qualities that distinguish women’s unique ways of leading. Women are 45% more likely than men to be seen as demonstrating empathy and outperform men in inspirational leadership, conflict management, organizational awareness, adaptability, and teamwork.[3] In social entrepreneurship, women inspire impact differently – emphasizing changing behavior, mindsets, and culture – over the traditional, male-dominated franchise model of scaling up to different countries. Female Fellows working this year to change systems for women in their communities are no different. We see examples of how social entrepreneurs challenge and shift societal norms, restructure harmful systems, and amplify women as leaders to enable them to change their communities and society.

Chile
There are countless societal pressures for women to look and behave in particular ways. The effects of these can be visible in the continued discrimination of women in the workplace or harassment on the streets, but there are also invisible consequences of harmful cultural norms. In Chile, Nerea de Ugarte has specifically focused two organizations, La Rebelion de Cuerpo (The Body Rebellion) and La Fundación Niñas Valientes (The Brave Girls Foundation) to fight the mental health complications that arise when girls and women find themselves unable to meet an impossible standard. La Rebelión de Cuerpo creates body positive content and publishes women’s testimonies to make an inclusive movement for all women. This work has gained enough traction to put pressure on companies to stop displaying imagery in advertisements that stereotype a woman’s body and portray negative gender roles. Nerea has been able to get public pledges from a companies like Steve Madden, Popeyes, Canada Dry, Watt’s, and Claro Chile, to discontinue this harmful practice. Nerea also works directly with girls through workshops that arm them with tools to mediate mental health issues and bullying from a gender lens. La Rebelión del Cuerpo has over 50,000 Instagram followers, over 1,500 volunteers throughout Chile and around the world, and chapters in 10 different regions of Chile and Argentina, Spain, Mexico, and Australia.

In Bolivia, Daniela Valdivia is addressing gender-based violence by redefining masculinity to reduce the alarming number of femicides and incidences of sexual abuse. She recognized that challenging patriarchal practices meant bringing men into the conversation. Therefore, her programs at Huellas y Futuro, which began in schools to share tools with parents, children, and teachers about how to identify, prevent, and break cycles of violence, are now being introduced to unlikely allies like the military and police force. Moreover, Daniela is influencing legal and political practices at regional and national levels as a result of her advocacy, including a passage of laws on gender-based violence, which did not previously exist.

United States
Callisto
From an approach to change the mindsets of perpetrators to a new victim-centered tactic of reporting sexual assault, Jess Ladd is flipping the way legal and medical professionals in the United States respond. She founded, Callisto, an online reporting tool, which began at two colleges and has grown to 13 campuses, supporting over 149,000 students. A survivor of sexual assault can securely create time-stamped records of the assault which is reported to their college when they are ready to take action. If a repeat offender is named, the report is automatically sent to relevant institutions and authorities.  Jess is disrupting a system where victims and the structural causes of gender-based violence have been ignored. Her reporting tool applies pressure on existing institutions and players in the complex system – from HR departments to the police to lawyers – and provides new mechanism for accountability in universities that had been previously overlooked.

Two Fellows are addressing quality of life issues for incarcerated women through institutional reform. In Mexican prisons, families of incarcerated women have had to ensure they have access to cash, as the government does not provide basic personal products, like sanitary napkins, shampoo, and toothpaste. Companies have taken advantage of incarcerated women’s lack of cash resources and have employed them in substandard working conditions. Daniela Ancira addresses this with her program, La Cana, which is fundamentally shifting the system of prison labor by ensuring the passage of new legislation that incentivizes companies to employ inmates at fair wages and in good conditions. She models how this can reduce recidivism with her own social enterprise that produces knitting and embroidery and pays women more inside the prison than they earned outside. Erica Gerrity is working on changing correctional institutions in the United States to improve women’s health access. Specifically, she is working to improve the conditions for the 6-10% of women who enter prison when pregnant and find a prison healthcare system ill-equipped for maternal care. Through partnerships with the University of Minnesota and pilot programs with prisons in two states, Erica’s organization Ostara is poised to spread a cost-effective model for improved prenatal and maternal health to ensure that the 75% of incarcerated women who are mothers are able to have autonomy over their bodies and dignity in care.

Turkey
Fisherwomen of Turkey
A persistent theme in the work of Fellows who aim to improve the autonomy of women around the world is to enable authentic leadership opportunities. In Turkey, Huriye Goncuoglu’s organization, Fisherwomen of Turkey, is training fisherwomen who have been historically left out of decision making to be leaders of economic autonomy and environmental protection. There are 100,000 fisher families in Turkey’s coastal areas, which produce 1,000 tons of fishery products annually, yet the communities are largely impoverished. Women from the families are often overworked and exploited for their labor and lack visibility, work safety, and equal pay. Through a holistic training program with a focus on professional development and leadership, Fisherwomen of Turkey is enabling leaders to take charge in their communities and is leading a movement for women to demand equal rights and improved livelihoods. Huriye plans to adapt the model to other industries and locations across the country.

Alexandra Machado is paving a pathway for strong female leadership with her Girl Move Academy in Mozambique. As the 6th poorest country in the world,[4] where the median age for first birth of a child is 19.7,[5] women in Mozambique lag behind their male counterparts in literacy – only 28% of adult females can read.[6] In light of this, Alexandra has focused on identifying female university graduates who can help uplift women across the country. She finds participants through a competitive selection process and gives them a one-year scholarship for a post-grad program on entrepreneurship and service leadership. Under the guidance of national and international experts, they engage in service work in informal settlements in three cities to pass on their learnings to other young women in these communities. The 64 Girls Movers, who have completed the program, have already mentored 2,400 12-year old girls, and 80% of the mentees have transitioned to secondary school (against the 24% nationwide average). By focusing on women leadership, Alexandra is betting on a trickle-down effect that ensures that adolescent girls are protected from early school drop-out, forced marriage, and child pregnancy.

How can we redefine success for women entrepreneurs to enable their growth and opportunity?

While women worldwide have made strides in critical areas such as health, education, and political empowerment, it is estimated that, given the current rates of change, the global gender gap will not be closed for another 100 years, and it will be another 217 years before economic gender parity is achieved.[7] In the face of such strikingly slow progress, we know that women entrepreneurs are uniquely capable of pushing the advancement of all women, and communities, forward.

Although the success of women entrepreneurs is well-documented, women innovators systematically face a lack of access to capital, social and financial, that would allow them to grow entrepreneurial initiatives, build networks, and scale their impact. The structural and social challenges begin in childhood and adolescence, when girls and young women are less encouraged and equipped to master changemaking skills and employ them to create social initiatives. Ashoka’s Women in Social Entrepreneurship initiative is an innovative and collaborative program that identifies and addresses the gender-specific challenges that stand in the way of women becoming leading social entrepreneurs and changemakers in their communities. WISE is redefining success and impact in social entrepreneurship from a gendered perspective and working to create a global mindset shift that acknowledges women’s unique ways of leading and changemaking.