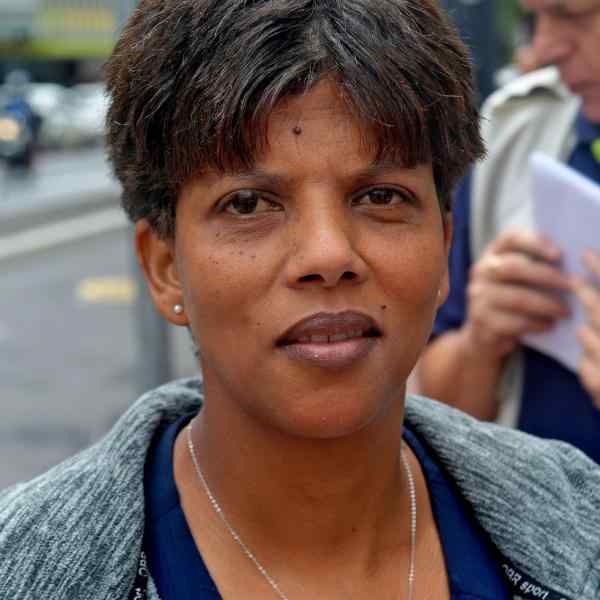 Wendy Jasmine Pekeur has established the first women-focused trade union in South Africa to champion the employee rights of female farmers. Wendy works in the Western Cape Province of South Africa, the country’s foremost wine producing region. In applying the trade union model to a farm setting, Wendy is empowering women (most seasonal laborers) to break the cycles of poverty, disenfranchisement, and alcoholism.

Though women make up a majority of the agricultural workforce in South Africa today, and a number of historical, societal, and economic factors; women on patriarchal, industrial-scale South African farms still have little power over their lives. In the past, formal labor contracts had been signed with men and only through their husbands were women guaranteed work on farms. Though the roles of men and women farm laborers have changed over the years and since the end of Apartheid, many female farmers have yet to exercise their full rights. In 2004, in this challenging setting, Wendy formed Sikhula Sonke (meaning “We grow Together” in isiXhosa). Through Sikhula Sonke, Wendy is ensuring the equality of people on farms, with a particular focus on women and seasonal workers who, to date, have had little (if any) representation. Today, Wendy and her team ensure that minimum employment standards are adhered to by farm owners; these include providing farm laborers and seasonal workers with livable minimum wages, health benefits, safe working conditions, and fair mediation of the termination contracts.

To eradicate the high levels of fetal alcohol syndrome (FAS), spousal abuse, and alcohol and drug addictions, Sikhula Sonke trade union is introducing a new code of behavior and professionalism to the farming environment in South Africa. In addition to demanding fair wages paid in legal tender and not in bottles of wine, Sikhula Sonke is changing the cultural norms surrounding seasonal farm work. The union and its members are promoting a new ethos that values empathy and respect for farm workers, particularly women, the disabled, and temporary employees. Men committed to this new system can join too, but those who wish to be represented by the union are required to first sign a resolution to desist from practicing any form of violence against women. With its growing support base and bargaining power, Sikhula Sonke has been able to better negotiate with farm owners on behalf of farm workers. As a result, the union has been successful in expanding and revolutionizing the support being offered to people on farms. Some is Sikhula Sonke’s hard-fought victories since its founding include setting a minimum wage standard for farm workers, securing childcare services on farms, providing access to savings plans to cover the costs of funerals (a vital social service), and ensuring better working hours and working conditions.

In South Africa the debate around land ownership and the rights of farm laborers has been a deeply contested historical issue. During Apartheid, land was owned mainly by white Afrikaner South Africans. The land in question had been forcibly taken from black landowners who were reduced to the status of farm laborers with no claim of ownership over the land. This created an exploitative (and legislatively sanctioned) situation where the power to employ and house the laborer—or not—rested wholly in hands of white farm owners. Generally, the farm owner provided employment, housing, and some land to the farm workers in return for their labor. However the farmer had total control while the laborer had little or no recourse when their rights were affected.

At the time, the practice was that permanent farm labor contracts were signed with the male farm worker. Since this contract typically included housing, employment, and a small parcel of land for subsistence farming, the family of the farm worker was dependant on this provision. However, should the farm owner be displeased with the individual farm laborer—the entire family would be reduced to destitution and lose not only their source of income, but their home and garden as well. Women were specifically affected by these conditions. In many cases, women worked in various roles on farms to contribute to the family income. However as tenure contracts were only undertaken with the male in the family, wives and daughters were subject to losing their employment if their husbands or fathers lost their positions on the farms.

Additionally, it has been the practice, particularly in the Western Cape, to pay salaries in the form of wine concessions know as the “tot system.” This has resulted in extremely high rates of alcohol abuse and in particular, high percentages of infants born with FAS in the area. It was also often found that physical and emotional abuse of women by male partners was rife. The dependence on the abuser for physical security further compromised women’s abilities to leave abusive relationships and undermined the safety of women and their children. Tragically, the social and living conditions of farmwomen and their daughters today is still, for many of these same reasons, extremely harsh. A 2001 study found that the Western Cape has the highest incidence of FAS in the world, with 40 to 46 per 1,000 first graders showing symptoms of FAS. The legacy of alcoholism and FAS remains pervasive on the farmlands.

Much has changed since the fall of Apartheid, but even in the face of a many welcome improvements to labor and tenure laws aimed at protecting the rights of farm workers and dwellers, conditions remain much the same; farm life continues to be characterized by an extreme power imbalance between the industrial farmer and his work force, with women farm workers being some of the most disadvantaged and vulnerable in South Africa. Despite the minimum wage legislation now in place for agricultural workers, most farm laborers still do not make enough money to live comfortably in the face of rising food prices and precarious housing and living conditions. Women farm workers therefore need a representative organization to raise demands with employers and the government. Traditional agricultural trade unions are not proactive on farms, especially with regard to women workers.

Wendy realized that it is impossible to effectively tackle the issue of labor rights without an integrated approach that addresses the full range of threats to farmwomen’s livelihoods. She also knew trade unions would have to be willing to become true social movements of the marginalized. By using the trade union as a unit to organize and empower the feminized workforce, Wendy saw the potential for the roles and rights of women farm workers to be recognized and expanded.

Wendy felt that organizing women laborers was necessary to address the interconnected issues of livelihood security, abuse, and the exploitation of women farm workers. But creating the trade union was just the first stage of her intervention; by addressing critical issues around labor in a growingly feminized labor force, further interventions could be attempted to ensure the place of all farm workers as full economic citizens.

Sikhula Sonke has taken the form of a trade union that addresses many diverse issues. Farm worker rights are just the entry point for improving general conditions and the lives of female farm workers. Sikhula Sonke’s successes include providing secure housing with women as title holders, better health benefits, better safety standards, and increased wages. Sikhula Sonke addresses gender issues to create strong leadership structures that include women at all levels and reflect their needs.

Since the early 1990s, the organization, Women on Farms, has represented the interests of a number of South African farm workers but has concentrated on social issues rather than labor issues. Despite their good and charitable work, increasing cases of labor exploitation of women living and working on farms demanded a different approach. Wendy created Sikhule Sonke to respond to these needs. She believes that farm women should be able to access land ownership through agrarian reform and ensure food security for their own produce without being threatened by the farm owner. The organization also focuses on finding new and innovative ways of organizing, taking into account all the changes in the world of employment.

Sikhula Sonke expects to further expand their area of intervention and consolidate their work in the Western Cape, where an estimated 350,000 farm workers are employed. Though they will remain focused on women, Sikhula Sonke is developing a strategy to specifically defend the rights of pensioners, disabled people, young people, and the unemployed who also live on the farms. The union currently has more than 5,000 members and serves a total of some 20,000 people when all dependents and relatives of members are included. Sikhula Sonke hopes to expand membership to 8,000 members (on an estimated 300 farms) by 2011, but growing the ranks is only one part of the union’s strategy. The union aims to diversify the membership, including men, but also ensuring that a minimum of 66 percent of the members remain women and hitting targets of 40 percent seasonal workers and 40 percent speakers of an African language, other than Afrikaans. On this last goal, language has been a particularly divisive issue, due to the fact that Afrikaans remains the local language and serves to divide farm workers who speak Afrikaans from those who do not. People who do not speak Afrikaans, as one might expect, are often disenfranchised. With the first step of organizing women farm workers achieved, Wendy has set her sights on improving the effectiveness of Farm Committees to provide better and more expanded services to members.

Still, there is a definite gap in the legislation in terms of addressing the needs of women farm workers. In the next year, Sikhula Sonke intends to lobby the government to improve the enforcement and compliance mechanisms of all labor legislation so that women farm workers derive maximum benefit. Some of these benefits will include improved access to housing, a higher minimum wage, paid sick leave, paid annual leave, and unemployment insurance. The union will also help women worker’s access housing on farms, paid maternity leave, and improved working conditions, from protective clothing to better latrines. By engaging the government and challenging labor laws and policies, Sikhula Sonke has the potential to affect nearly 1 million farm workers nationwide.

Wendy grew up on a farm and, as in the stories of so many farm workers in South Africa, themes of alcohol abuse and child neglect were deeply woven into her life. Despite these challenges, even as a young girl, Wendy was driven by a deep desire to ensure the equal treatment of women farm workers. Soon enough, Wendy would experience the many challenges confronting women farm workers; her first job was as a seasonal farm worker in the Western Cape.

Although there was a worker representative structure in place, Wendy saw that it did not cater to the needs of seasonal workers. Instead, having an ineffective structure in place reduced the power and the ability of seasonal farm workers to best represent their interests. Given her experiences and her intrinsic drive for equality, she became more involved in helping to transform the lives of farm workers and move toward land tenure for these potential small farmers. Specifically, Wendy’s personal struggle with farm owners practicing the tot system, led to her broader understanding of these systemic issues and the need to create a voice for women farm workers.

Today, Wendy, 31, is still motivated by the need to create more equity and equality in rural communities for those marginalized due to gender, language, culture, and perceived powerlessness. As the only female and youngest General Secretary in the organized labor movement in South Africa, Wendy is a trailblazer challenging male-dominated social institutions and reinventing the role for women on farms and in society.