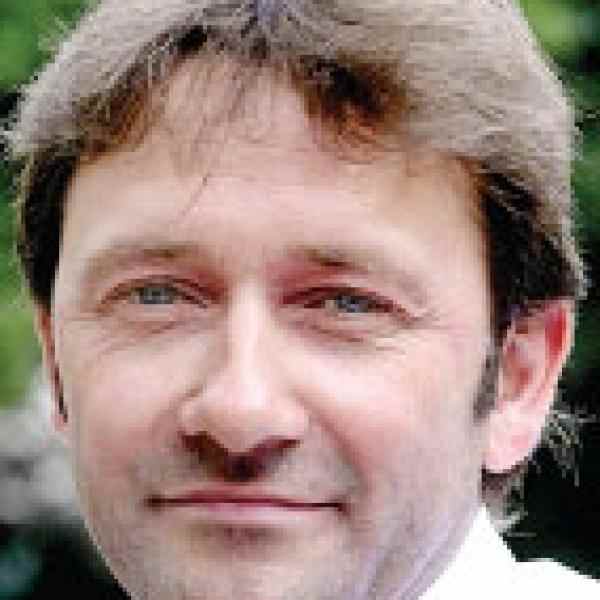 Volker Baisch is changing the way corporate Germany and German society understands and encourages fatherhood by offering opportunities, education, and support for men in the workplace and beyond.

In a nation where men still struggle to spend quality time with their children and often grapple alone with what it means to be a father, Volker is transforming the way corporate culture and society understands and supports fatherhood. Through his organization, Vaeter e.V. (Fathers’ Association) and his corporate program, Dads—Fathers in Balance, Volker is empowering fathers both in and out of the work place.
In corporations and businesses across Germany, Volker is introducing the concept of work-life balance and finding ways for companies to give their employees more flexible schedules and credit for the skills they learn as parents on paternity or maternity leave. Working with everyone from CEOs to junior staff, Volker is transforming corporate culture to support and celebrate fatherhood for the benefit of fathers, mothers, and children across the country.
Seeking to give men not only the freedom to embrace fatherhood, but also the skills and confidence to do so, Volker reaches out to society through media and speaking engagements, online communities, and Father Centers where men can gather to learn and socialize together, and with their children. Using a wide variety of outreach techniques from field trips, to celebrity-endorsed campaigns, to father-child classes and support groups, Volker is tackling the challenge from every angle and transforming fatherhood from an unattainable ideal to a real and fulfilling experience for men and their families across Germany.

Despite major advances in gender equality over the last fifty years, men who want to play an active role in raising and caring for their children are often marginalized and isolated in society and the workplace. While a recent Shell Youth Study showed that 80 percent of all young Germans desire to have a family with children, the reality is that fewer Germans are having children as they get older. Germany has the lowest birth rate in Europe, and among German professionals with college degrees it is lower.

Among men who do have children, there has been a dramatic increase in the number of fathers who would like to spend more time with their children and are frustrated by an inability to do so. According to trade unions and the Hans-Böckler-Foundation, 77 percent of men would cut working hours to spend more time with their kids. Ninety percent of the men surveyed feel overwhelmed and torn between their responsibilities to their families and their careers. According to surveys, every third man suffers from burn-out syndrome at work or at home after only two years of fatherhood. Couples often state that the work-life balance dilemma is one of the major sources of intra-marital tension. Divorce rates are at an all-time high now, with forty percent of marriages ending in divorce in Germany’s major cities. Marital and familial strife affects men’s careers and their professional productivity plummets up to seventy percent for six months or longer after a divorce. For those men who would like to take paternity leave or rearrange their work schedules to spend more time with their children, there are often severe consequences. Corporate culture in many companies requires men to work long hours, late evenings, and forgo family events. Many men fear they will jeopardize their chances for promotion or even their current positions if they reduce their workload, change their schedule, or take paternity leave to attend to their families.

For those who do alter their work schedules or take time off to be with their children, parenting information and support are hard to find. Few men in Germany feel comfortable in their roles as fathers and would benefit from education, support groups, and organized activities to do with their children and other fathers. While there are many organizations for mothers to provide these services and support, there has been no systemic outreach to fathers. Without support from their companies, their peer group or a community of fathers to belong to and learn from, fatherhood is often an ideal that men are forced to strive for alone.

Volker’s organization, Vaeter e.V. uses several different programs and approaches to support fatherhood on a corporate, personal, and societal level. The result is a financially sustainable organization that provides a holistic solution to the powerlessness, frustration, and discomfort most men feel.

Realizing that for men to embrace fatherhood they must first have the freedom and support of their workplace, Volker launched the corporate program, Dads—Fathers in Balance. In the same way many large companies hire consultants to improve their business, German businesses, large and small, are hiring Volker to make their workplaces more father-friendly.

Volker’s Dads—Fathers in Balance program begins with an engagement of the executive level. Networking with business associations, Volker finds executives and managers interested in his program. Volker then runs a survey on employee satisfaction and family issues to highlight where companies can improve by offering more flexible work arrangements and parent-friendly policies. With prerequisite backing from at least one executive team leader, Volker sets up a steering committee in the company to help him tackle the challenge and guides an official “kick-off” event in which the CEO informs employees of the new drive and program to improve parenting and family policies for both the men and women in the company.

With the launch of Dads—Fathers in Balance begun from the top-down, Volker then turns to drive the momentum from the bottom-up, supporting junior staff and finally middle-management in their desire for more family-friendly policies. Bottom-up, Volker sets up a discussion forum on the company’s intranet, organizes follow-up meetings, workshops and discussions with different departments and sets ups an anonymous information hotline and counselling sessions. The anonymous hotline and counselling sessions are especially important for winning over middle- management who tend to set the standards of conduct in most corporate cultures, but are also fearful of showing a desire that would inspire a loss of confidence from either above or below. To counteract this corporate feature, Volker waits until enough enthusiasm and data has come from the top and the bottom before inviting mid-and upper-level managers to small-group discussions where most express their own work-balance frustrations for the first time.

At the same time as he is generating support for a corporate culture change among each employee, Volker works with the Human Resource department to put new parent-friendly policies in place and advertise existing ones more positively. Paternity leave, workshops of work-life balance, “bring your child to work” day, and stories highlighting fathers and their children in the corporate newspaper, are just some of the approaches Volker encourages.

Volker is also able, in many cases, to bring about a transformation in how companies understand maternity and paternity leave. Previously considered “unproductive time off”, Volker is helping companies understand and reward with promotions and encouragement the so-called soft skills employees may learn from parenting. At the same time, he lobbies for “promotion policy based on output” rather than working hours to offer more flexibility for parents and improve company efficiency and productivity.

With his “Dads—Fathers in Balance” program, Volker has worked with corporations as big as Airbus (16,000 employees) or Techniker Krankenkasse (a health insurance company with 11,000 employees) but also with mid-size and family-owned businesses seeking to improve employee satisfaction and encourage active fatherhood among staff.

To ensure that the intra-corporate changes spill over into society, Volker does not just corporate work and public outreach, but provides for individual fathers in different communities. In Father Centers, financed by the proceeds of Volker’s corporate program and consulting, men are able to receive information and advice from other fathers and experts on a range of issues (from child psychology to marital counsel). Volker realizes the importance of men receiving information from other men to make it more comfortable and most objective for the father. With first-time fathers generally more emotionally available and eager to learn, Volker identifies these men as multipliers for the society and offers programming in the Father Centers to encourage their interest and skills. Classes on issues like the father’s role during pregnancy as well as activities like father-baby swimming are offered and are expanding to different cities across Germany.

Volker’s dynamic public outreach, media strategy, and lobbying, are influencing individuals and corporations to make fatherhood a new value in German society. Volker finds German celebrities to become “father ambassadors” to the public while also networking with women’s and family planning groups to support and spread awareness about his programs. He organizes field trips for children that highlight not only different jobs, but the fatherhood of the men who do the jobs as well. Volker’s website, www.vaeter.de is a society-wide platform for fathers to meet and exchange ideas, concerns, and advice online. This website is the platform for a fatherhood network that receives over 200,000 “hits” per month. Volker has also succeeded in getting the Hertie Foundation, one of Germany’s biggest foundations, as a strategic partner and supporter for his website and association.

Volker is regularly booked for speeches and campaigns on fatherhood for associations and companies all over Germany. With these speaking engagements, Volker not only gains revenue to subsidize the Father Centers and the website, but he builds a reputation of expertise that helps him gain influence over government policy. Volker is consulted as an expert in men- and family related issues by the family office in the German government which has resulted in a new German law on Family and Work-Life Balance. This law explicitly gives fathers the incentive to take at least two months off during the first year after the birth of a child. For the first time, many families can now afford for the father or the mother to take parental leave or combine them consecutively. As a result, the demand from families as well as from corporations has strongly increased.

Volker is preparing to expand throughout Germany: His newly founded “Father Academy” trains multipliers and freelance consultants to replicate his approach. With the proceedings from the corporate program Dads—Fathers in Balance, he will establish Father Centers as hubs in each of Germany’s sixteen states.

Volker comes from an entrepreneurial but traditional family: His mother stayed at home and cared for Volker while his father worked long hours in the construction business. Volker had a challenging relationship with his father who worked in upper-management at the same company for which Volker campaigned for better worker’s rights. While the conflict between father and son remained, Volker succeeded in improving the company’s training system and in increasing the enrollment rate of trainees into full employment positions after their graduation.

Inspired by the trade unions and the peace movement in the 1980s, Volker left the corporate world to study social work. While in school, Volker set up the first career center for German universities to help better prepare students for the work world. His center was quickly replicated across the country. After graduation, Volker took over as the managing director of a center for violent youngsters. There, he recognized a link between poor father-child relationships and the violence and delinquency he witnessed in his charges. Volker also worked as a self-employed coach on violence prevention and published a book about violence in young men.

Volker’s inspiration for his current work came in 2000 when his first daughter was born and he decided to be a stay-at-home dad for two years. Suddenly alone with his daughter, he felt lonely and isolated. While he knew some men looked down upon him, he was surprised to learn how many others were envied his decision and wished they had the freedom in their work place to be closer to their children. Inspired by interviews with these men, and his own experience as a father, Volker started Vaeter e.V. in Hamburg in 2001.