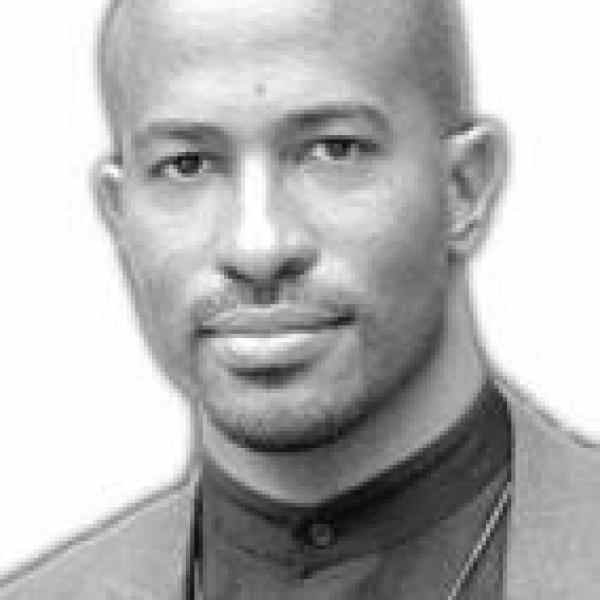 Check out this video of Van Jones's work

Van Jones is bringing a higher standard of accountability to the criminal justice system at a time when the number of US prisons is multiplying and police harassment is becoming an issue of increasing public concern.

Van is leading the fight against police brutality, racial bias, infringement on civil liberties, and other violations. He has developed a variety of programs that aim to change criminal justice policies in the long run. Realizing that legal services alone will not solve complex human rights challenges facing the prison system today, Van's Ella Baker Center for Human Rights (EBC) develops and supports community-based organizing.

In 1996, the Center started the country's first and only lawyer-referral service for police misconduct: PoliceWatch Hotline. Jones uses state-of-the art technology to document and track police misconduct, which is then made available to lawyers, organizations, and the media. Secondly, the Ella Baker Center is establishing civilian reviews of police conduct where it does not exist and improving existing procedures. This will promote democratic control of law enforcement agencies. Most importantly, Van is giving voice for the first time to young people most affected by lapses in the system. Finally, he is launching a public education campaign to draw attention to increasing expenditure on prisons and the shortage of funds for education.

A unifying component of all his strategies is the drawing together of "unlikely allies": those who, regardless of race, income, or ideology, are unwilling to accept the escalating costs—moral, physical, and economic—of America's growing number of prisons.

There is a growing incidence of police misconduct in America–unjustified shootings, severe beatings, stranglings, and unfair treatment. While the number of officers who abuse their positions is proportionally small, law enforcement supervisors and local and federal government officials often fail to restrain or penalize them. Documenting police misconduct in fourteen cities, Human Rights Watch found that police officials lacked mechanisms to ensure public accountability and transparency, and have persistently failed to investigate and punish officers.

The decentralized nature of America's police force, absence of a watchdog agency, and indiscriminate expansion of prisons also contribute to police misconduct. The prison system today is ten times larger than the one that existed thirty years ago. In many states, corrections expenditures have increased more than seven times since 1980. Surprisingly, this dramatic expansion has occurred while crime rates have stabilized or fallen. According to Van, there are three things that every citizen should know about this problem. Firstly, the "punishment industry" puts a one hundred fity billion dollar drain on public coffers, costs which may triple in the next twenty years. Secondly, some prominent corporations, politicians, and special interest groups benefit directly from this allocation of U.S. tax dollars. Thirdly, there are demonstrated alternatives to incarceration for non-violent offenders that would be both more effective and cheaper—opening up public monies for education, health care, and environmental cleanup.

More sinister than indiscriminate growth is racial profiling. Though African-Americans comprise only 13 percent of monthly drug users, they are arrested at five times the rate of whites, are twice as likely to get a prison sentence after being arrested, and on average that sentence will be 20 percent longer than the one given to a white offender.

Present responses are inadequate. Although a few high profile groups, including the Justice Policy Institute, release valuable studies and policy recommendations, they do not follow up and organize supporters to lobby for their ideas. While others valiantly attempt reform through legal services or litigation, few judges or jurors understand the big picture well enough to be receptive to their legal claims for redress.

Van launched the Ella Baker Center for Human Rights in 1996. His first initiative, PoliceWatch, is the only legal hotline for police abuse survivors in America. The hotline counselors inform callers about their rights and available remedies, and give practical tips for navigating the system. It uses state-of-the-art computer technology to document and track police abuse. For example, using software designed in-house, the Center identifies problem officers, precincts, and practices. The information is then made available to attorneys, reporters, and organizations. To attract lawyers, EBC organizes referral panels that accept lawyers on a contingency fee basis, and in conjunction with the National Lawyers Guild provides training, networking, and legal support.

Van realized that providing legal services alone would not solve the problem. The Center is thus getting lay citizens involved in the difficult task of making law enforcement more humane and accountable. Over the past four years, EBC has helped local groups establish or improve civilian review systems in three San Francisco Bay Area cities. Fairfield's city council established its first commission to study police misconduct and hired an "auditor" to evaluate its complaint process. Until 1997, Oakland's Civilian Police Review Board was biased toward officers as those charged with misconduct were allowed legal representation, but complainants were not. EBC supported Oakland residents in a campaign to level the playing field and was successful. Lastly, in San Francisco, EBC staff mobilized public support against the San Francisco Police Commission when it refused to discipline a notorious police officer, Marc Andaya, whose thirteen-year reign of terror had netted him thirty-seven formal complaints and five lawsuits. EBC's advocacy resulted in the appointment of a new commission that fired Andaya immediately. Other projects include INS Watch, which works with Latino immigrants in San Francisco's Mission district. Through its Jail Watch Action Committee, EBC supports San Francisco County Jail inmates and service providers, who are working to document and curb jail abuses. Given the scale of the problem in some cities, Van is partnering with other organizations such as the New York Center for Constitutional Rights, the National Lawyers Guild, and the New York City Gay and Lesbian Anti-Violence Projects in a number of community-based campaigns that call for reform of police practices.

Van has a special interest in organizing and giving voice to young people of color who are affected by police brutality. EBC has helped incubate three youth leadership and development projects in the San Francisco Bay Area and in New York City. For example, in a campaign in 1997, the organization engaged a large number of young people who brought poetry, hip-hop culture, and their experiences with the police to a coalition that united diverse communities from around San Francisco. Following the campaign, a handful of youngsters founded the Third Eye Movement, which uses cultural events, peer-to-peer "know-your-rights" workshops, and direct action to engage young people in the growing human rights movement.

The above campaigns laid the ground for Books, Not Bars (BNB), Van's most ambitious plan to date. Phase one will focus on research, fundraising, identifying allies, and designing the campaign around three themes: that big business' desire to make money should not determine the functioning of the criminal justice system; that no corporation should set out to profit from human suffering; and that to prepare our kids for the future, society needs serious resource reallocation to support schools, not jails. This phase will see collaborations with top media advocacy, criminal justice policy, and community organizers. Books, Not Bars will kick off its second phase with a public education campaign with high profile spokespersons, television and newspaper public service announcements, and a top-notch web site. At the same time, EBC will launch local action campaigns in several Californian cities where BNB members will organize teenagers to non-violently picket and protest the corporate "Dirty Dozen": those who profit most from the growth of prisons. Meanwhile, BNB organizers will bring together parents, teachers, business leaders, labor organizers, and faith leaders in adult task forces that will push city councils to adopt "Books, Not Bars" or "Schools, Not Jails" resolutions, as well as budgets reflecting those priorities. In phase three, four years in the future, Van believes the campaign will have gained sufficient capacity and momentum to push for fiscal and criminal justice policy changes at the national level.

Van is aware that he will need to draw widespread support for the campaign and is determined to "unghetto-ize" the issue. For example, by drawing attention to the enormous opportunity costs of prisons, he can garner support from conservative economists eager to find strategies for growing the labor market. And by proposing that states invest in green businesses rather than prisons to bring jobs to rural areas, he expects to win approval from both environmentalists and potential prison guards.

Van says, "A lot of my story is about being part of the first wave to integrate every institution" after civil rights legislation. The integration began in childhood, when he remembers his mother always calmly confronting situations where the family was poorly treated by whites. She neither exploded, nor walked away, but dealt with each situation. Van went to a public college in Tennessee, on a minority scholarship. Sensing that some African-American students thought they couldn't quite do the work, he pulled them into a group that used peer pressure to achieve, to "use excellence as a weapon against discrimination."

Van began a career in journalism at age sixteen. He continued to work as a journalist during college and started three student newspapers: the Fourteenth Circle, the Periscope, and the New Alliance Project, to link all African-American students in Tennessee colleges. Van's journalism work took him to Louisiana, where he saw racism and poverty as he had never seen before. He knew then that, to achieve the kind of change he wanted, he would have to be more than a writer. After an internship with the state legislature, Van entered Yale Law School. Almost immediately he encountered racism and, in response, began mobilizing people to tell their experiences, creating an audience for them, and changing the system.

During a summer internship at the Center for Constitutional Rights in New York City, Van was shocked by what he saw–individuals being vaccinated in human health research without consent. He returned to Yale to study the civil rights movement with care, moving from unexamined subtle family stories to a deeper understanding.

The next summer, Van interned with the Lawyers' Committee for Civil Rights in San Francisco and was assigned to follow the Rodney King trial. During the looting and demonstrations afterwards, he witnessed police singling out African-American and Latino kids and letting the white kids off. "I saw it, and I had to stay." Van gave up a prestigious summer position in Washington to negotiate with the maximum-punishment posture taken by the district attorney's office. In his final year of law school, Van was shocked by the stance the Clinton administration took against two hundred and fifty-one black HIV-positive Haitian refugees who were put in prison indefinitely. He mobilized college students from thirty-six universities and the ensuing public pressure led to the closure of the prison camp and freeing of the refugees.

Upon graduation, Van returned to the Bay Area as the first-ever Thurgood Marshall Fellow to work as a legal staff member at the Lawyers' Committee for Civil Rights. He worked on issues such as environmental, employment discrimination, educational equity, and homelessness. But he discovered that when he went to communities to converse with people about environmental toxicity, they steered the conversations to the way the police treated their kids on the streets. When Van tried to find existing services for this problem, he could not find any. Consequently, he convinced the Lawyers' Committee to allow him to address the issue and began to investigate possible programs. Borrowing materials from a referral service he had seen in Los Angeles, Van set up the Bay Area's first legal hotline for police abuse survivors and soon after launched EBC.