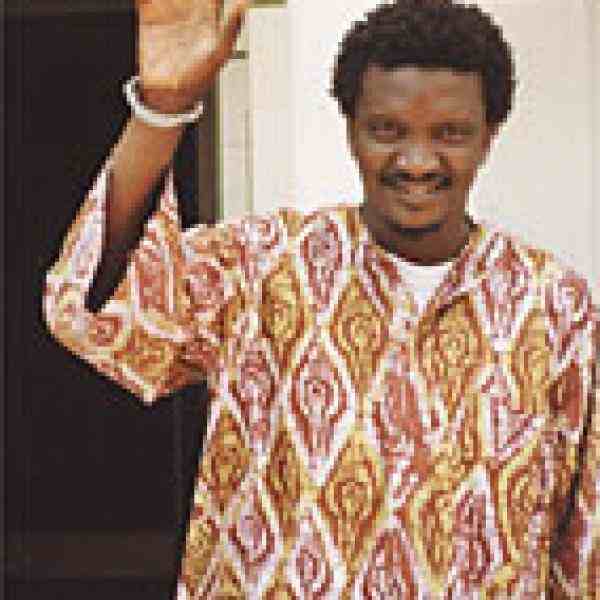 Thierno Seydou Sall is re-inventing the field of social communications for rural Africa. With two musicians and sheaves of his own and others' provocative poetry, Thierno is affirming aspects of traditional culture while challenging other aspects, and raising consciousness about basic rights and values among rural villagers and urban dwellers in Senegal. By presenting issues for discussion that have traditionally been viewed as taboo, Thierno is bringing a "new kind of participatory democracy" to people and challenging them to take charge of their lives. He is working with them to develop the local capacity to reflect and act upon the changes compelled modern by forces in ways that retain what is positive in rural village life while embracing modern notions, such as legal equality, that can help "the village" to survive into the 21st century.The impact of Thierno's village and town square sessions is extraordinary. In simple, but thought-provoking language, Thierno speaks for those who are usually neglected in social-political life, especially women, and children. His poems positively communicate the message that it is time to allow all members of society to participate fully in creating a new social order based on respect, humanity, and friendship rather than on social status, gender, and wealth. He shows how this change can hold the village together through the larger historical forces re-shaping Africa. Somehow, he provokes and affirms in a way that inspires reflection, discussion and new kinds of village action. Everyone from the oldest to the youngest laugh and cry and exclaim together through his sessions.As a secondary market for his methods, Thierno has also begun to work with agencies seeking to promote "rural development"&#150;both NGOs and governmental departments. With these groups, he is fashioning ways that they might collaborate by building in a social communications component to their rural development projects.

The epochal historical shift from country to town, from traditionalism to modernity, has wreaked havoc on rural village life around the world. While the historical progression has brought much that is positive for humankind, it has also, as modern life bears vivid witness, badly rendered the social fabric that sustains communities. Today in the world there is tremendous effort to rebuild the "civil society" that traditional village life could take for granted.At the same time, village life was a life defined by rigid status relationships. None have described this better than De Tocqueville when he contrasted America of the 1830s with a fading "aristocratic" era in Europe. "Among aristocratic nations, as families remain for centuries in the same condition, often on the same spot, all generations become, as it were, contemporaneous. A man almost always knows his forefathers and respects them; he thinks he already sees his remote descendants and he loves them. He willingly imposes duties on himself toward the former and latter, and he will frequently sacrifice his personal gratifications to those who went before and to those who will come after him. . . As in aristocratic communities all the citizens occupy fixed positions, one above another, the result is that each of them always sees a man above himself whose patronage is necessary to him, and below himself another man whose cooperation he may claim.""Among democratic nations new families are constantly springing up, others are constantly falling away, and all that remain change their condition; the woof of time is every instant broken and the track of generations effaced. Those who went before are soon forgotten; of those who will come after, no one has any idea; the interest of man is confined to those in close propinquity to himself. . . Aristocracy had made a chain of all the members of the community, from the peasant to the king; democracy breaks that chain and severs every link of it."So it is in the Sahel today. As representative democracy, capitalism, and legal equality come to rural villages they break the chain that link people to one another. Traditional beliefs and practices such as the subjugation of women and young girls, as well as more recent trends, like religious fundamentalism and other "phalluscracies" (as Thierno describes them), are blocking participatory democracy, equality and healthy human development in the rural Sahel. The tyrannical aspects of Tradition will be defeated by the irresistible force of Modernity, but at a terrible cost. Those who are entrenched in power in the traditional order will resist change bitterly. On the other hand, some will embrace the worst aspects of modernity&#150;such as crude consumerism&#150;while rejecting everything in their own culture. Thierno speaks sadly about people who "fill their living rooms with overstuffed chairs to impress their neighbors and then have nothing to feed the children."

Thierno's objective is to ease the passage from the traditional past by building the capacity of rural society to reflect and act on its condition. His strategy is to use the culturally powerful medium of the oral tellings and "social memory" to provoke reflection and discussion about topics that would otherwise be left hidden, shrouded in the mists of taboo. His method is simple and direct&#150;he recites poetry and makes music "like electroshock" to disturb and inspire people to think afresh about their destiny. "Poetry and music can provoke important changes in the minds of people," he says, "because of the totality of the message that they convey."Traveling from village to village with his troupe of musicians, Thierno reads his poems and asks the members of his audience to question certain traditions and attitudes that in the past have prevented them from reaching their potential as humans and citizens. The most enthusiastically received themes are those that relate to the status of women and children.The content of Thierno's poetry challenges those elements of tradition that are no longer appropriate or do not enhance the quality of life of people in present day rural (and urban) Senegal. He also challenges inappropriate values based on materialism. In Thierno's own words, "It is our interior richness that is of value&#150;not how many overstuffed chairs we have in our home." His poetry "opens the hearts and minds and souls of the villagers, enabling them to see the way that is right for them."After a reading, Thierno invites debate and discussion about the topics addressed in his poems and encourages his audience to write their own poems, songs, stories or proverbs. He has collected, published and distributed a volume of more than 65 poems written by villagers. By giving people a taste for literature and writing poetry themselves, Thierno is encouraging the development of cultural activities at the village and district level while establishing an emerging "culture of liberation". His troupe's presentations are remarkably well-received; wherever he goes, he is invited back. Thierno is always seeking ways to disseminate his poetry more broadly so that people can discover and adapt his new approach to "cultural animation" for their own use.Thierno began by concentrating on ten villages, paying them repeated visits. He and his troupe saw the transformation of attitudes about women's roles and the rights of children. They witnessed a new sense of self-worth among women and children, and the ability to grow and participate as equals in the community.Word spread and Thierno began to receive invitations from other groups. One of these, Plan International, invited him to work with village associations in the Louga region where Thierno's presentations were followed-up by trainers and facilitators to encourage debate. A series of seminars with local citizen groups was held. The groups learned and adapted Thierno's techniques and suggest themes that are tailored to their development interests.Through this experience Thierno discovered an important intermediary market for his methods in agencies promoting development. Accordingly, Thierno has begun to work with these agencies&#150;both private development organizations and governmental departments to add social communications components to their rural projects.Thierno also sees the expanding use of the media as an integral and reinforcing part of his strategy. Six volumes of his poems have been published and an audio cassette will soon be available. He is heard increasingly on TV and radio as well.

Thierno has been writing poetry since he was a small child, when, he says, "my head was full of crazy ideas" that he felt set him apart from his society. He has been a wandering poet since his early 20's. He has published six books of poetry, some of which have been translated into as many as seven languages. Today he finds his primary poetic inspiration among rural villagers. "My fate as a poet is tied to the fate of African village culture," he says."In a country dominated by the powers of religion and the state," says the poet, "one must believe fundamentally in one's own dream, one's own vision, and find a way to sustain it, like a powerful counter-power."Thierno Sall, the person, is poignant affirmation of another of De Tocqueville's enduring insights into the transition from Traditionalism to Modernity. De Tocqueville chronicled how democracy in America liberated the individual to pursue self-interest. While this brought great benefits to society for a time, he warned prophetically that there could come a moment when self-interest became selfishness and society would become a hollow rather than a civil place. What will then be required, he might have imagined, are extraordinary individualists like Thierno Sall, who understand that their individual destiny is inextricably linked to that of society. This rich understanding of what it is to be human runs throughout Thierno's poetry, as it does in the perennial African philosophy of Ubuntu, which is best known by the aphorism, "A person becomes a person by means of other people."