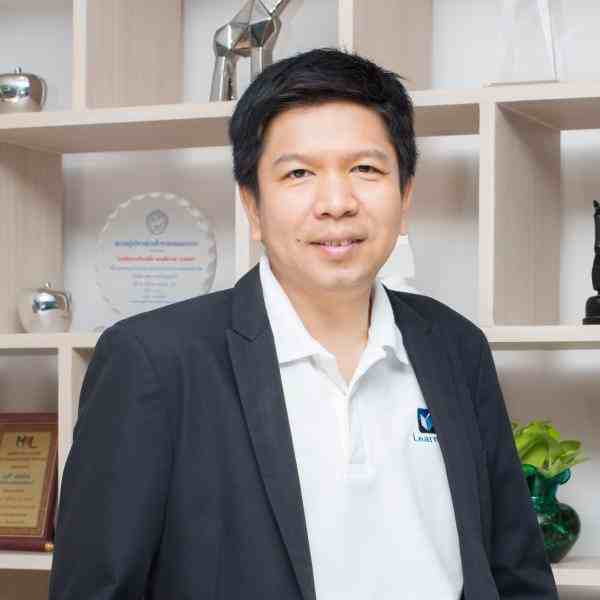 Tanin Timtong is changing how math and science are taught in Thai schools because he knows, from personal experience, that education is the best route to a better life. His social business, Learn Education, is producing measurable results and generating new momentum for broader education reform.

Tanin wants to see Thailand provide students of all backgrounds with good educational choices that suit their interests and lead to fulfilling careers. He aims to transform the education system by proving that existing schools and teachers can lead change. Tanin provides schools with a “Blended Learning Platform,” which combines the advantages of traditional classroom learning, like contact with a teacher, with technology and systems that resolve many of the disadvantages, such as unfavorable student-to-teacher ratios. In Tanin’s system, students learn at their own pace, while teachers rebalance their approach to include less time spent lecturing and more individual coaching.

Adopting the system is a commitment worked out between Learn and an individual school--usually led by a forward-thinking director and a team of energized teachers. Tanin has designed his systems to be customized and adapted easily, which makes it easier for teams of teachers and software developers to co-create. Each school and each teacher decides how much or how little of the system to use and how to introduce it. Schools that can pay are charged a per-student fee, while those that can’t are served through a cross-subsidy structure. Public, private, and alternative schools use Tanin’s systems.

The results have been astonishingly good. Participating schools have seen their national standardized test scores rise as much as 20%, prompting more demand. While he already works with 35 thousand students in 150 schools, Tanin has his eye on a tipping point of one million students and 10 thousand teachers, a milestone at which he believes the demand for tech-enabled education solutions will create unstoppable momentum for broader education reform. Boosting his effort is the cumulative and detailed data of how students learn and perform. Besides data from classroom, Tanin and his team have researched over 100 organizations in the same field around the world.

Tanin sees many areas for growth. He’s expanding the curriculum into other subject areas, including ethics and citizenship. He has launched a popular web community for teachers to share materials and take short online classes to learn coding and other new skills (often because they want to customize software for their own classes). He still wants to develop solutions for the slowest 20 percent of students, who struggle even with the new system. And Tanin sees potential in reforming the education system to meet the actual labor needs of the country, a process that can be informed by good data and innovation.

For decades, Thailand has experienced structural problems with both the quality and accessibility of education. In 2011, the country recorded a shortage of 400,000 qualified teachers in mathematics, science, and English. At many schools, the student-to-teacher ratio reaches 50:1. Because headmasters are judged by how many students they can seat, schools commonly operate beyond capacity. This means more work for teachers. Occasionally, primary school teachers end up teaching secondary school classes. This deteriorates classroom and teaching quality significantly. The annual turnover rate of teachers can be as high as 20% in many schools. Without enough well-equipped teachers, schools are overwhelmed.

Not all schools suffer equally. A centralized, top-down education system allocates resources to schools by size. While first-tier schools in Bangkok and provincial capitals receive more government funding, middle-tier schools are often neglected. Lower-tier schools, often in marginal communities, get the least support and have the most communal challenges, like drugs and incarceration. Thus, the gaps among different tiers of schools are enlarged by the centralized budget structure. The situation becomes downward spiral where the smaller, more rural schools are struggling to provide good education.

Tanin believes that if he can transform the education of a million students, he’ll achieve a critical mass that will open the education system to innovation and reform. Reaching this goal entails creating effective classroom systems, showing consistent results from a variety of schools, developing new roles for teachers, and expanding to serve new areas of need.

His target group is the sixty percent of students who enter upper school at age 12-13 with only elementary skill; they can add and subtract, but struggle to multiply and divide, and are unprepared for the algebra, geometry, chemistry, physics, and calculus classes ahead. Tanin feels that the first three years of upper school are the crucial time to help students catch up.

The methods and systems Tanin uses today he developed during an intense several years of testing and refinement, starting in 2011. His first idea, to share great classroom lectures by video, failed to catch on with students, and the lesson he learned was that even the best lectures can’t substitute for individual attention. Tanin then met an ally in the rural province of Suphanburi, a school director in charge of his family’s private high school but educated as an engineer. The director agreed to create an experimental program, providing teachers and computers, while Tanin and his small team would develop something the school could use. After two years, the school’s average high-school graduation exam scores had gone from 10 points below average to 20 points above.
One piece of the platform is instant feedback. Students are assessed automatically, privately, on their classroom computer, and given customized lessons. Rather than waiting a day or two for quiz results, students are informed immediately. The student’s individual curriculum adapts to the results, offering further review of old material or starting the next lesson. Students also give rating to lessons and teachers, creating a new channel for student feedback. Meanwhile, teachers are relieved of the tedium of marking test and quiz papers by hand-- a ritual that consumes their days and nights.

Reducing teacher workload is another key to success. Tanin recognizes that teachers have a difficult and varied job, and that real reform must revolutionize the teacher’s role in the classroom. By offering instant, painless grading of student work, Tanin removes hours of labor from their long days, and secures their interest in developing and maintaining the platform.

Five more schools signed up, and Tanin began building his entire service: outreach to schools, research and development, teacher support. As he took on new clients and began working in public, he discovered new challenges and new opportunities. He found that public schools evaluate students almost entirely by test scores, and that the enthusiasm of the school director was the most important factor in success. Remote schools struggled with absenteeism during agricultural or monsoon seasons. The weakest 20-30% of students require specialized support. Subsidies and sponsorships would be needed to reach the farthest, least served schools.

Learn Education now serves 150 schools in 45 provinces, half public, half private or alternative, and about 20% are fully subsidized by Learn Education or other sponsors. Cost per student is about $50 per year. Tanin expect that as Learn Eudcation grows, the portion of very needy schools it serves through alternate financing will also increase.

Tanin feels that to reach his goal of 1 million students and 100 thousand teachers will mean more than spreading the use of his learning platform. He wants to focus substantially on creating opportunities for teachers to produce and share solutions. TrainKru.net, which Tanin launched to connect them, share resources, and foster collaboration, now has ten thousand members. Teachers can also take online classes related to developing technology for their classrooms in subjects such as coding and design. Tanin is also seeking to develop ways to support parents. He recently received approval for a set of printed materials with QR codes that students can scan with smartphones to retrieve further material.

Tanin was born in 1977 in Nontaburi Province, adjacent to Bangkok, to a family of modest means. His father, a school janitor with little education himself, encouraged his oldest son to study hard, and Tanin became a top student. The family’s prospects brightened briefly when Tanin’s father took a job climbing poles for the electric utility, then were dashed when he suffered a catastrophic workplace accident. Tanin spent his teenage years studying and working, helping his father recover, helping his mother pay bills. He changed his course of study from history and archaeology to engineering, in order to earn a practical degree.

After graduation, Tanin was hired by a Japanese manufacturer hoping to start operations in Thailand. Thus began a long career in which Tanin practiced not only the technical side of his trade-- setting up a factory from scratch and managing production-- but also learned sales, finance, management, and marketing. It was a fulfilling career in that Tanin was recognized for his ability and rewarded for his accomplishment.

Now a young executive, Tanin began a part-time MBA program at Thammasat University, feeling unsatisfied in a self-centered professional life despite his success. His own experience and travels throughout the country had brought his attention back to the question of education and employment. Decades of empty talk about education reform had gone by, with little to show. He began wondering what it would take to raise the quality of education for the average student in a typical school. He made two friends with backgrounds similar to his. They pooled their capital and founded Learn Education. in 2011, with Tanin as Managing Director.