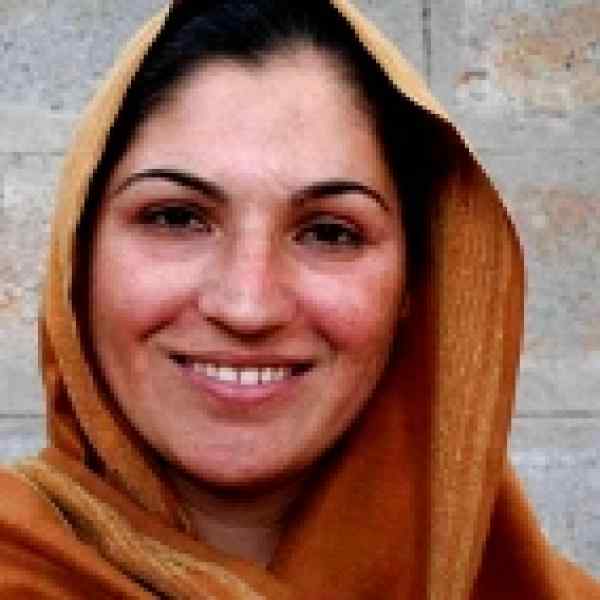 Association for Behavior and Knowledge Transformation (ABKT)
Shad Begum is planting the seeds for a grassroots women’s movement in the isolated tribal areas of Pakistan where men determine women’s mobility, visibility, and voice. Using group activities and…
Read more

Shad Begum is planting the seeds for a grassroots women’s movement in the isolated tribal areas of Pakistan where men determine women’s mobility, visibility, and voice. Using group activities and micro-credit to empower women, Shad builds their capacity to become politically active and run for office, thereby gradually supplanting the male-led jirgas—illegal, self-authorized local councils—that govern outside the law.

Shad’s group activities for tribal women, whose voices and identity have been silenced by generations of oppression, help them to gradually regain their confidence and independence.

Her organization, Anjuman Behbood Khawateen Talash (ABKT), runs a micro-credit program and trains women in ways to earn more money. This program enables women to come together without arousing suspicion among the men. Participating in these groups enables women to organize, govern themselves and learn to interact confidently with the outside world.

Financial independence gained through micro-enterprises also empowers women to exercise more influence as their communities make decisions. Shad gradually brings women into the formal political process, especially in respect to government allocations for development projects. Traditionally, women’s legal right to vote has been denied to them by political and religious leaders. Shad is encouraging and guiding women to participate in local elections not just as voters but as candidates as well and thus gain a foothold in local government policy-making.

Shad’s vision goes beyond business and political training for women: her goal is to defeat the authority and power that local religious and self-governance councils exercise over women. She is networking with women councilors and female politicians to spread her grassroots women’s organization movement throughout Pakistan, while building a male voter bank that supports women in politics.

The tribal regions of Pakistan, which make up about half the area of the country and account for 19 percent of the female population, are notorious for their suppression of women’s mobility and visibility. Women have no voice or recognition at the district and regional levels, which is where budget decisions are made and where rights are implemented. Despite a national law requiring government bodies at all levels to reserve one-third of the seats for women, tribal councils bar women in their areas from voting, let alone running for office. Women have no presence on these illegal, self-appointed councils, which often pass important decisions affecting women’s lives at Jirga level. For instance, they have forcibly married women to atone for their male relatives’ crimes, or to resolve conflicts between feuding families and tribes. Many people believe that giving freedom to women—including education and paid work—will open society to vice, drawing people away from religion and into sin.

At home, women observe purdah and do not venture out or change their daily routine without a man’s permission. Centuries of subjugation have cultivated meekness among women, who often suffer most within the walls of their own homes. There have been many cases of women dying due to violence inflicted during pregnancy or a difficult childbirth.

This historical trend of discrimination has affected not only women, but the whole society. It has also slowed down development and progress in these tribal regions. Government resources allotted to development projects for women are usurped and misused by local leaders; in Dir, Shad’s native district, government funds are used to establish sewing centers instead of much needed primary schools and teacher training programs. Since women are not allowed to go to these centers, the centers become dormant and corrupt officials steal their funding. Today, Dir is considered one of the most remote and economically lagging regions in the country—controlled by tribal leaders who view development as a threat to their influence over the local population and harmful to the religious and social fabric of society.

Shad’s first step in realizing her vision of a women’s movement is providing opportunities for the women to gather and work together. ABKT initiates programs in microcredit and savings, non-formal basic education, health and health education, and political education. All of these serve to instill confidence and, most important, trust among the women to form a basis for organizing—mobilizing them into formal women’s grassroots organizations. Women members are trained to convene meetings, maintain records and accounts, and crucial communication skills. They learn to hold elections and play roles as office bearers and executives. This experience builds women’s confidence and provides a platform to voice their needs and collaboratively devise solutions.

Shad is very strategic about ensuring that her women’s organizations are not threatening to men. She cleverly enlists them in supporting their wives’ activities. Under Shad’s leadership, the number of such groups grew from five in 2000 to eleven in 2005 and their increased visibility garnered support from their male relatives to venture into small income generation activities. She started providing microfinance loans to women to help them start small home-based ventures such as breeding livestock, sewing, and selling clothes and cosmetics. The income provides women with a way to fulfill their needs and contribute to household expenses but more importantly—the power to make independent financial decisions.

The final phase of Shad’s strategy is political awareness and mobilization. In 2001, when the Government announced a 33 percent quota for women in local and national governments, Shad motivated women leaders to participate in the elections. The result was a severe backlash from religious leaders, especially those affiliated with political parties. Fearful of the political fallout, all parties, including the liberals, banned women candidates from not only running as candidates, but from voting as well. Furious, Shad decided to run for office. Men stood guard at district offices with sticks and weapons to scare away anyone who dared to file nominations for women candidates. Despite difficult resistance, Shad’s father managed to file her nominations papers for the district and she ran for office. Only 28 women were elected and when they went to attend council meetings, they were confined to a room and asked to observe strict purdah—neither be seen, heard, nor to hear the voices of strangers. Minutes of the meetings were given to them in following sessions to read; the women were given absolutely no opportunity to express their views. Undeterred, Shad continually lobbied to participate and be heard during the council meetings—reaching out to the Ministry of Women Development and the Local Governance Ministry to exert pressure on the council members.

Over the last 5 years, Shad’s efforts have had a strong impact. Negotiating with the various political parties and effectively communicating the voices of an increasing number of women’s organizations in her network, Shad was able to assist 104 women to become elected to local councils in 2005.

Shad’s goal over the next 3 years is to increase the number of women’s groups in Dir to 60 and begin spreading to neighboring districts through partnerships with community organizations. She has roped in the Civil Society Human and Institutional Development Organization to support formalized training for organization members as well as to spread her network. At the same time, she plans to grow the number of clients in ABKT’s micro-credit portfolio to 2,500. Shad believes linking women’s groups to income generating activities is crucial to increasing the growth of ABKT’s development.

Thanks to her outstanding performance as a woman councilor, Shad enjoys the respect of her male colleagues and even the Chairman of the district council often seeks her advice. She is recognized as a leading mentor and trainer for women in local politics. Using her credibility and position, she motivates women councilors from tribal regions to start women’s grassroots groups in their constituencies as a means to bring more women into politics. Shad plans to expand her program to six other districts and introduce a modified strategy in the urban areas over the next 3 years. She is also putting institutional infrastructure and second-line leadership in ABKT so her team may lead the organization in Dir, while she focuses on partnering with COs and women councilors in other districts. Shad has also started to use media and communications channels to highlight her mission nationally and globally. She strongly believes that spreading the message outside Pakistan will help her access resources and create international pressure for social reform in the tribal areas.

Shad Begum comes from a family committed to education. Two generations ago, the tribal chief had banned all forms of education and Shad’s grandfather was punished for informally imparting basic religious education to boys sitting under a tree. Despite that, he continued to teach. Shad shares her grandfather’s beliefs and strong determination. At a time when the idea of educating girls was considered heretical, Shad’s father ensured that she received an education at home. She finished high school in a neighboring district and later graduated from university in the neighboring district of Malakand.

In the mid 1990s Shad’s father started a citizen group to assist women and children; although few people offered to participate and many women were not ready to work. With her father’s encouragement, Shad decided to plunge into social work. But within a year, the program was troubled by severe opposition from tribal councils and religious leaders. Shad decided to build on the training she received working with her father and carved out her own space by founding ABKT in 1994. From the beginning, Shad’s aim has been for her organization to spur others to replicate its model; not a solitary campaign.

Shad’s work with women has earned her recognition from the Prime Minister of Pakistan and the Food and Agricultural Organization for her outstanding contribution to food security in the Dir district. Her male colleagues seek her advice in district management and the Federal Government recognizes her as a leading mentor for the training of women councilors.