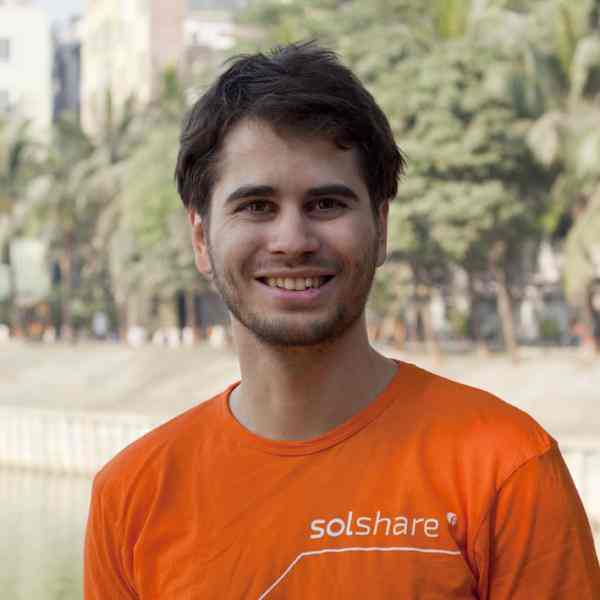 Sebastian is transforming how energy is being delivered and consumed through his game-changing peer-to-peer solar energy trading platform. His digital, decentralized and decarbonized solution is empowering people to take their energy futures in their own hands.

Sebastian is driving a new energy economy model in Bangladesh through a radical solution that is enabling densely populated households and businesses to buy and sell energy through the creation of self functioning nano-grids. Known as ‘swarm electrification’, the innovative system creates bottom-up, decentralised mini-grid networks (within communities and not connected to the central grid) that allows those with excess electricity production to sell this otherwise wasted solar energy to other households or businesses within close proximity, and those without energy supply to buy from their neighbours. To be part of the grid, each stakeholder must acquire a ‘Solbox’, which is a machine-to-machine enabled and integrated direct current, bi-directional power meter that forms one node of a peer-to-peer solar nanogrid. Through its ICT enabled interface and partnership with mobile money wallet giant bKash, producers now become prosumers (producers who also consume) whilst those alienated from energy access previously have now the option of buying energy at low marginal cost. The mobile money can be retrieved as a digital payment or in most cases it is used to pay for goods and services at markets, thus facilitating an open economy model.

Leveraging the already existing infrastructure in Bangladesh through the massive penetration of Solar Home Systems (SHS’s), Sebastian is licensing his technology through implementation partners such as Grameen Shakti, who have huge access to customer bases. Sebastian is thus focused on building partnerships and sharing the open economy model with other stakeholders in Bangladesh and beyond.

The first prototype as a first of its kind worldwide has been replicated globally and Sebastian’s company continues to be recognised as the pioneer organisation in developing the swarm electrification concept and possibly as the future concept for electricity utilities globally. Sebastian shares his insights in developing tis technology and its implementation regularly at major international fora as well as within academic publications.

Faced with an overburdened and inaccessible national grid, over 50 million people in Bangladesh today lack access to any form of electricity. Of those that do have access, especially in rural areas, the supply is often unreliable or intermittent, forcing many to use hazardous and environmentally detrimental energy alternatives such as kerosene or diesel. In fact, it has been a common occurrence in Bangladesh to have nationwide blackouts due to cascades of failures along the national power grid. The economic cost of non-electrification, like lower earning potential, health hazards, and the social cost, like higher crime rates, rapid urbanisation, is enormous for Bangladesh’s exponentially growing population, in particular for the poor.

Given the unique geographical setting of Bangladesh, with large number of rivers and dispersed rural settlements, a centralised, nationalised grid connection that consistently covers the whole country is economically not viable and physically not possible. Exacerbating this further is the governance failures, corruption and theft that is so common when it comes to procurement of energy.

Recognizing these challenges, the Bangladeshi government as well as many NGO’s have been working together to push for renewable and solar based alternatives for energy production. Despite the huge penetration of SHS’s across the country, where households are producing their own energy it is estimated that on average annually, 30% of energy produced by each household is wasted due to limited storage or utilization capacities. Increasing storage through bigger batteries in each house is not an option as this would reflect poorly on battery health when seldomly fully charged during non-sunny periods.

Since 2003, the state sponsored Infrastructure Development Company Limited (IDCOL) as well as major institutional partners such as Grameen Shakti has helped Bangladesh become the world’s largest distributor of SHS’s, with almost 5 million systems installed across the country. It is estimated that over half of the world’s SHS’s are in Bangladesh. Pushing this forward is also the Governments grand vision of universal electrification in Bangladesh by 2030.

Through his pioneer organisation, ME SOLshare, Sebastian is creating technology solutions to enable energy sharing among households and businesses in close proximity of each other. Based on distributed ledger technology (connected with smartphones and smart meters), the sharing of energy can happen through the creation of small nano-grids. Small clusters of households and businesses can operate their own grids, as opposed to how a normal grid functions, through a centralised power plant distributing to all households. SOLshare’s model wants to determine prices through an open market system, where prices are a function of demand and supply. In order to prevent monopolies from being created, a progressive fee based system has been introduced where households pay a higher fee once crossing a certain threshold in electricity sales volume.

As a first step, Sebastian partners with solar distribution partners such as Grameen Shakti, which has the largest market share with close to 2 million solar home systems distributed across Bangladesh already. By not having to build and sell the infrastructure from scratch, Sebastian is able to focus on the servicing and continuous development of his products such as the signature offering of the ‘SOLbox’. The SOLbox is a bi-directional DC electricity meter that enables the creation of smart grids by integrating existing hardware such as SHS’s and connecting these with other SOLboxes in the community. The SOLbox has an intuitive human machine interface and can be set to various modes depending on the user. If a household or business just wants to sell energy, they can set their SOLbox on sell mode, where their neighbours who are either on auto mode (buy and sell depending on energy generated) or buy mode, can purchase. Integrated with mobile payment wallets, the SOLbox is monetizing excess energy supply and empowering communities to earn directly from the sun. This money is funnelled back into the local economy as households either purchase goods and services, such as groceries or move towards even greater production means by purchasing solar panels. Thus, over time, due to the financial incentive, there is a much greater movement towards decarbonized forms of energy production and economic and social progress being made.

SOLshare has largely grown through a reverse innovation model where it is the customers who have played the biggest part in developing the technology further through open loop feedback. For example, it is a local businesswoman that educated the SOLshare team that the SOLbox is much more than just a transfer machine, but that it is an energy bank that can liquidate formerly lock-in assets such as monetizing the power already stored in a user’s own battery.

In order to achieve a critical mass in each community, Sebastian has created a buffer system which buys or sells excess electricity initially. This ensures that the initial trading can happen without the system falling due to a lack of houses or businesses without the SOLbox. Sebastian is empowering communities by giving the village head or community ownership of this buffer system which they collectively buy in order to start the system and then reach a critical mass.

SOLshare also has an alternative Pay-as-you-go model that facilitates an open economy system by which users can use facilities for particular uses. For example, there are over one million electrical rickshaws in Bangladesh and drivers are able to stop at a local market stall to charge their vehicles and then pay in real time using mobile money. For consumers like this, using Pay-as-you-go systems on average decreases costs by 30% as opposed to the same amount of energy they would get from buying a SHS. For producers, the return on investment on the solar panel infrastructure they install is more than 500% over a five year period, as estimated by SOLshare. This increases earning potential for those with SHS’s and incentivises others to buy new systems.

SOLshare’s infrastructure partners are now becoming implementation partners as well. By licensing out the technology and training staff members from these organisations to be able to service the SOLbox, Sebastian and his team are able to focus on building partnerships, continuing to develop newer products and share the idea of swarm electrification with stakeholders. Currently there exist 15 solar peer-to-peer grids across the country with another 100+ to be rolled out in the next year and a half in partnership with Grameen Shakti alone. Each grid has on average 30 households or businesses.

So far SOLshare has impacted 15,000 lives (with a Social Return on Investment of USD 4.85 of impact created for every USD 1 raised as estimated by Asia IIX), trained 2750 field staff through it’s ToT model and has had an estimated environmental impact of 25,000 CO2e reductions by 2019. The next 5 years, SOLshare has created a roadmap to impact 1 million people through the creation of thousands of more grids across Bangladesh.

Sebastian was born and raised in a small village not far from Frankfurt in Germany. From a very early age, there were two distinct traits that made him stand out from his peers and friends; his eagerness to ask questions and his deep sense of justice. If he deemed a situation to be unjust, Sebastian would stand up for the person that was being treated unjustly. These traits saw Sebastian choose compulsory social services work over military duty and he got the opportunity to be the big brother of an autistic child in the UK for a period of a year. Sebastian recalls this being a turning point in his life in that the lessons he learnt in patience and time would carry on for the rest of his life. Sebastian started recognizing that miracles were absolute in one’s life and the small changes that he saw in this child, such as being able to put on his own pyjamas after six months was worth the care and love that was demanded from him.

Sebastian also was a brilliant yet mischievous student, attending a lecture on ‘How to do business with the poor’ simply to get free food at the end of the event. This event was also a major shake up for Sebastian, as he was gripped by a panelist representing the firm MicroEnergy International, whose founders ventured into Bangladesh to explore the Grameen Shakti model in the early 2000s. Knocking back opportunities to continue down the line of Investment Banking, Sebastian decided to move to Berlin to pursue and Internship with MicroEnergy International where he started to learn about the links between microfinance and renewable energies.

Sebastian never looked back, expanding his knowledge base and work experience with Renewable and Solar Energy across many countries in Latin America and Asia. After a deep dive into his PhD on the role of Energy in Development Processes as well as into how start a company based on one’s empirical findings at Stanford Ignite, Sebastian established ME SOLshare soon after in 2014, along with Hannes Kirchoff and Daniel Ciganovic, and under guidance of Daniel Philipp and Noara kebir of MicroEnergy International. Since then he’s built a strong institution with over 30 staff members and many well established partners. SOLshare has been recognised for its groundbreaking work by the UN with a $1 million grant received in 2017 along with Grameen Shakti as well as winning the prestigious Momentum of Change prize representing a range of Bangladeshi stakeholders.

Sebastian has also recently ticked off the biggest personal milestone in his life, marrying his Bangladeshi wife Farzana with the support of close family and friends.