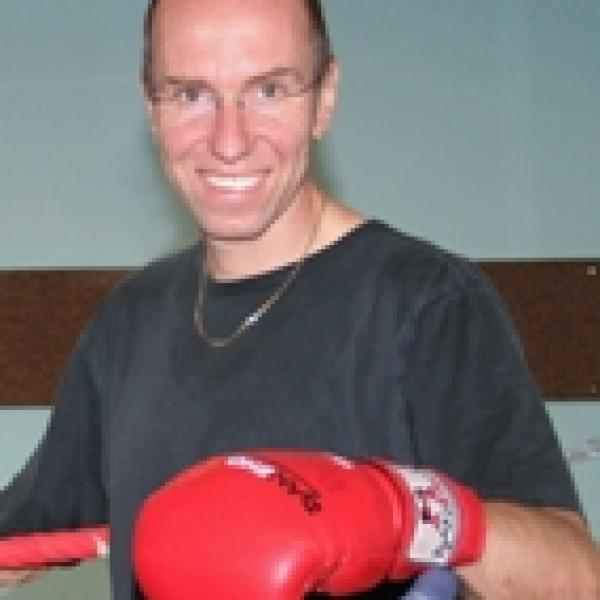 Through an innovative program called “Work and Box” Rupert offers young violent offenders between the ages of 14 and 20 a platform to positively express and cope with their aggression. By bringing them together with adult mentors, he presents positive role models and helps to break the negative stereotypes that keep young people from being able to pursue healthy and productive lives. Rupert works with a variety of groups, from business managers and volunteers to students and juvenile offenders. By communicating and working together, they begin to move past cultural stereotypes and focus on the individuals.

Violence—in the home or on the streets—is often denied or ignored. Yet the prevalence of violent behavior especially among youth remains a serious problem. Traditional social rules and roles have become blurred. Recent violence directed at authority figures, such as teachers in schools, relays the severity of the issue. There has also been an increase of violent crimes committed in public, in which no one intervenes. For example, reports of rape, attacks on highly frequented streets or outbursts of violence on trains are unabated when no one contacts the police.Increasingly, violent offenders are repeat offenders, and are younger. In 2004, youth between the ages of 14 and 21 committed 69,750 offences in the state of Bavaria—approximately 22.7 percent were violent offences, out of which 85 percent were committed by males. Currently young offenders are removed from public into detention camps (with a re-socialization success rate of only 10 to 20 percent) or prison.Aggression also comes in more subtle forms: harassment at companies, verbal aggression in relationships, even bullying in the school yard. According to psychologists, violence and aggression can be inappropriate means of communicating feelings of fear, anxiety or shame.

In October 2003, Rupert created Work and Box, a center for young violent offenders at the verge of imprisonment. He began with violent youth because he felt the causes of violence—neglect, shame, aggression—are clearly visible. If he could figure out how to work with the most troubled youth, he could address the issue in broader society.Work and Box uses sports, such as boxing, as instruments to help young offenders communicate their feelings and understand their own behavior. Boxing becomes a metaphor; too much aggression is akin to a lack of self-control and neglect of self-defense leads to self-neglect.Rupert has designed a coaching system linking violent offenders with employers and tutors and school children; enabling re-integration and communication while challenging society to acknowledge violence in a constructive and pro-active way.In early 2004, Rupert built a successful system that re-integrates young violent offenders from Work and Box into the labor market and mainstream society. Rupert involves entrepreneurs in the region to give these violent youngsters a chance by offering internships and vocational trainings. By putting volunteers face to face with one of the young offenders, Rupert forces both sides to overcome their stereotypes. While people learn to confront violence, the offenders relearn social behavioral patterns and how to control violence. Step by step, the young men are re-integrated into society and encouraged to lead a self-determined, responsible life. Despite having been labeled by society as hopeless cases, 80 percent of them find a job or go back to school to finish their education within eight months.Rupert expanded his system in early 2005 by setting up a consulting entity linked to Work and Box through a mentorship system that connects managers, employees, and young offenders. The goal is that both sides will challenge and learn from each other. Managers and employees—including both men and women—attend seminars where they “work and box” with the youth. In this way, they are confronted with someone who is "the other". As participants are forced to re-work their attitudes toward violence, they experience new methods to cope with it and new ways of communicating. They realize that “the other” is not a monster, but a human being. Through confrontation they are challenged with their own—however hidden—aggression which finds its outlet in quarrels at work or fights at home. They realize that aggressive behavior or even verbal violence is common in normal working life and is often an expression of hopelessness or fear, which similar to what the young offenders face (albeit at a different level). Rupert also offers workshops and seminars for enterprises to help them to openly discuss violence and aggression. Rupert is currently expanding the workshop and mentorship system by implementing a tutoring program to connect mentors with young prisoners. The aim is to develop a relationship between them, while a young man is still in prison, developing goals for the young man’s future. Managers continue as mentors and tutors when the prisoners are released and help them to find an internship or gain a foot in the job market.In 2005, Rupert also introduced his program to schools in low-income areas and ghettos to sensitize young people to the problem of violence and help them cope with it. In boxing seminars, pupils learn to understand body language, to control aggression, to talk about violence, to interfere when violent behavior arises, and to respect and adhere to rules. Through this process, Rupert hopes to challenge people’s attitudes while steering potentially violent youth in a better direction.To enhance his outreach, Rupert has partnered with one of Germany’s most successful film production companies, Boomtown Media, to produce a documentary film about Work and Box. The film will focus on the young offenders: their history, their confrontation with their actions and past and their moving away from violence. The film is scheduled to be released in mainstream cinemas in Germany and in urban schools with high levels of violence in 2008. Graduates of Work and Box will accompany the screening in schools and facilitate sessions on violence to engage children in a discussion about violence; telling their personal story of a violent background and how they managed to leave it behind. The common thread running through Rupert's work is that he creates situations in which people learn to deal with violence, to communicate with each other, to recognize the human core in all of us as well as the aggressive potential everyone possesses. Thus, Rupert helps people to confront violence instead of looking away, think through it, and learn to react in an appropriate manner. If people can handle violence using better communication, they can handle other issues as well.Beyond work with schools, the film, and consultancy, Rupert continues to trigger discussions and encounters around violence—speaking at the German national conference on crime prevention and security. He is also developing a franchise system to set up other Work and Box projects in other cities with high incidences of violence.

Rupert is from a troubled family and has lived through many of the problems his clients now face. He knows that he was lucky to survive his childhood without serious harm. He says that thanks to his childhood he is able to relate to the fate of the young men he is caring for. To him, violent behavior is always a process but not an inherent state of being. On his own, Rupert worked hard and successfully earned an apprenticeship as a carpenter. Six years later, he was heading three companies that he bought out when they were at the brink of insolvency and saved dozens of jobs. Even before the buy-out, he had changed the factory organization to enable young apprentices to make up 50 percent of those employed. During that time he gained experience in training people, as well as in dealing with young apprentices from difficult backgrounds. From his experience growing up he was sensitive to incidences of violence in daily life; even within his company. In 1999 he started a training course as a boxing instructor and realized it could be a good tool for what he had in mind. He stresses that he is not interested in boxing as a martial art, and has never attended a boxing match. In 2001, he started to concretely plan Work and Box. It took him two years to receive buy-in from various ministries and to convince them that someone like him, without an advanced education and not experienced in the citizen sector was capable of running the program. In October 2003 he founded Work and Box.