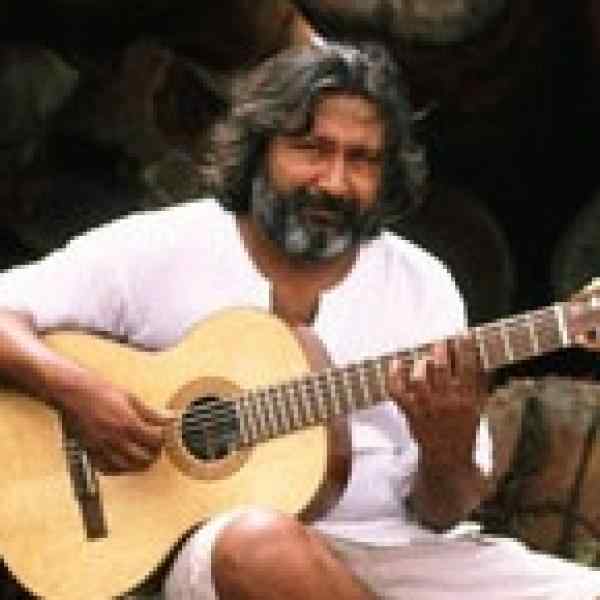 Oficina Escola de Lutheria da Amazônia
Rubens Gomes is working to slow the deforestation of the Brazilian Amazon while teaching rural and urban community members how to use the resources in a mutually beneficial and sustainable way.…
Read more

Rubens Gomes is working to slow the deforestation of the Brazilian Amazon while teaching rural and urban community members how to use the resources in a mutually beneficial and sustainable way. Rubens's program develops lines of alternative certified wood products&#150;from musical instruments to furniture&#150;while maximizing the natural and human resources of the Amazon.

Rubens is using the neglected and underutilized wood products of the Amazon to improve the lives of the people who live in and around the forest. Since current timber extraction uses only one-third of the felled wood, Rubens has designed an approach to maximize the use and minimize the extraction of wood by creating alternative products that generate income for Amazon people.
Rubens is teaching river communities that by managing, harvesting, and efficiently processing their wood resources, they can earn far more than simply selling off their forests. At the same time, he works with poor urban youth to teach them how to use this new supply of community-managed wood, wood waste, and abundant species in specialized product lines. The public face of Rubens's work is an environmentally certified string instrument production line made by poor urban youth in Manaus. Rural and urban communities are trained how to transform natural resources into social goods. On one hand, Rubens provides professional development and citizenship building for young people in poor urban settings. On the other, he works with rural communities to implement sustainable community forest management systems and alternative processing of wood for creating finished wood products. On a larger scale, Rubens is promoting the multiple and sustainable use of forest resources throughout the Amazon region.

The Amazon region, with 3.6 million square kilometers of forest, is the world's largest tropical forest, containing one-third of the world's biodiversity and the greatest wood stock on the planet. Until the 1970s, the rate of deforestation in the Brazilian Amazon (60 percent of the total Amazon region) reached 1 percent. In 1999 this figure jumped to 15 percent of the original forest coverage. This abundance has been carried off at a low appreciation of its real value. For this reason, unsustainable and "predatory" extraction of wood has led to great economic and social losses. The wood industry typically uses nearly three cubic meters of cut wood to produce one cubic meter of lumber. Out of the nearly 30 million cubic meters of wood that is felled by the industry per year, nearly 20 million cubic meters are wasted, becoming scraps, sawdust, and discarded pieces. These residues are typically burned or transformed into low-value products like charcoal. Therefore, millions of hectares of forest have been destroyed without any significant social or economic return for the majority of the population in the region.
The unsustainable use of the region's natural resources, combined with failed rural development policies, have led to a high rate of urban-rural migration. Manaus, at the heart of the Amazon, has experienced a population increase from 850,000 to 1.5 million in the last 10 years. Rural families lacking access to basic social services or technical and financial support for their small farm productions come to the city to face the same form of social and economic exclusion, only this time urban style. Living in the shantytowns sprawled out from the city center, this new urban population lacks access to basic education, health services, and employment. Unemployment averages 60 percent in poor neighborhoods in the outskirts of Manaus and less than 10 percent of the residents have attended high school. The young people are the most hard hit by this reality without opportunities to work, learn, and, overall, build a dignified future.

Rubens believes that the Amazon's natural wealth can be transformed into social goods to improve the quality of life for the region's 13 million rural and urban inhabitants. In order to achieve this goal in a sustainable way, companies and communities in the regions must become actively involved and share in the responsibility.
In 1998 Rubens began a pioneering initiative to create opportunities for poor youth in the outskirts of Manaus that incorporated environmental concerns with social inclusion. He joined his love of music and professional experience as a luthier and started the first string instrument-making course for at-risk youth that uses alternative wood species from the Amazon certified by the Forest Stewardship Council. Rubens formalized the activities by founding the Luthier's Amazon Workshop (Oficina Escola de Luteria da Amazonia-OELA in Portuguese), the first school of its kind in the Amazon, which earned the first "Green Seal" in the Americas for instrument-making. Rubens's main objective was not only to produce professional luthiers, but also to build the students' capacity as citizens by providing them with professional development and the concept of income generation from the forest.
In addition, Rubens wanted to create opportunities in rural areas and preserve the environment. Committed to using only certified wood, Rubens designed a second component of his work that would stimulate the supply side of his production to in turn stimulate sustainable management of forest resources and alternative products for wood from the Amazon. Discovering and testing native wood types that are in abundance and fit for instrument-making and other alternative products takes the pressure off of high value woods and increases the value for the less targeted species. Through his research, Rubens has discovered over 25 species from the Amazon that can be used in instrument making through sustainable forest management.
To stimulate community forest management, Rubens began to work with rural communities in the region. Since 1999, he has been working with community members from Boa Vista do Ramos County to found the Center for Training on Wood Processing with 20 students from the community learning the trade of wood processing. His main partners in this initiative are the community groups and associations that work with handicraft making and sustainable forest extraction. His first line of action involves working with the Community Association of Agriculture and Forest Extraction.
Rubens and his team work with 18 associates to strengthen the association's organization and legalize the extraction of forest products with the relevant state monitoring agencies like IBAMA (Brazil's national environmental protection agency) in order to formalize their work and help overcome their marginal status. Secondly, he works to establish a connection between the extractors and beneficiaries of the resources, to guarantee a more efficient use of the wood. He also conducts training for the associates in wood cutting and using lumber machinery. Finally, his work is geared at opening up markets for the alternative products.
On another front, Rubens works with the community's handicrafts association that brings together the principal woodworkers of the city. Rubens and his team work with the artisans to strengthen the organizational process of the association, train associates in producing handicrafts made from wood with aggregated value, implement a line of community production, and support the opening of markets.
Rubens has built an extensive list of partners to promote the sustainability and expansion of his work, including the Ford Foundation, IMAFLORA, UNICEF, and AVINA. He has mobilized artists and musicians to purchase the instruments in order to bring visibility and support for the set of initiatives he is carrying out. Rubens is ready to replicate his idea in other rural communities and poor urban neighborhoods throughout the Amazon, creating alternative products from certified wood, better lives for community members, and a more protected environment.

Rubens was born in the Amazonian state of Amapá. After studying music, his first professional experiences were as a musician, founding the Clave de Sol music school and serving as a conductor for a band and chorus in a rural county outside Belém.
In 1981 Rubens moved to the state capital city of Acre and founded another Clave de Sol music school, the first music school in the state. He was also involved in social and environmental movements, being committed to questions of citizenship building for Amazonian peoples and preservation of natural resources. During this time, he was inspired by his friend, Chico Mendes, who was fighting to defend the rights of rubber-tappers and other "people of the forests," and who was assassinated in 1988 for promoting social transformation.
In 1993 a string instrument-making course lured Rubens to leave the Amazon temporarily. He went with the idea of receiving professional training and qualification for instrument-making to return to the Amazon, especially Acre, to develop an initiative for young people in poor communities to serve as multipliers of the activity. He was specifically interested in working with youth in conflict with the law, and so he returned to Acre and installed a music program within a government detention center. The government-funding program Rubens started, Projeto Dó Menor, was designed to give these young people contact with music and instrument-making with the aim of providing opportunities when they left the center. However, the government prematurely stopped funding the project, making it impossible to continue the courses. Rubens realized he would have to establish a private institution to implement his idea and not depend on the government. He founded the Center of Cultural Production with a group of colleagues. Together, they were able to mount expositions of the instruments made by the youth in the federal Senate and for the Communidade Solidaridade launched by the first lady to show the potential of youth in the Amazon.
In 1995 Rubens was invited by the University of Amazonas to implement a course in string instrument-making in Manaus. During this time he continued researching, asking the National Institute for Amazonian Research (INPA) to identify new alternative and appropriate species that could be used for instruments. But with a changeover of university directors, the course was discontinued. Fortunately, Rubens had succeeded in training two more luthiers.
Rubens realized the impossibility of continuing his work within public institutions and invited his two students to refine their skills by mounting the Luthier's Workshop of the Amazon (OELA) in the poor neighborhood of Zumbi where he lived. He set up shop in 1998 and has since become a reference for social and ecological transformation far beyond the art of making music.