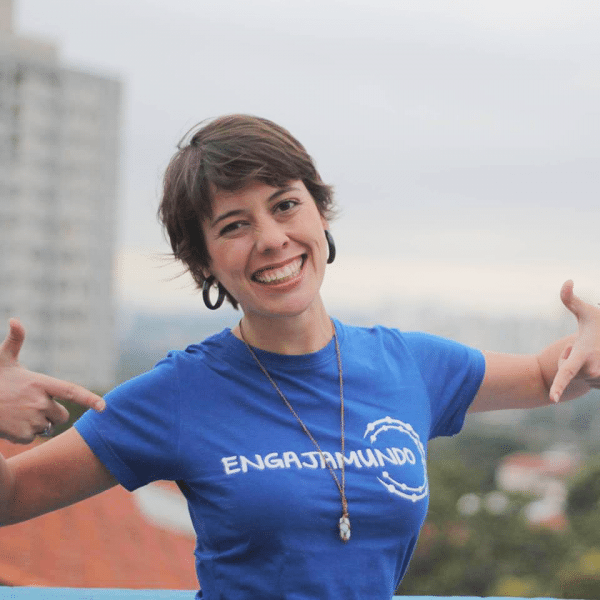 Raquel co-developed an innovative platform to connect and engage young people in public affairs. She wants to change the pattern in which youth learn about and participate in public affairs. Engajamundo is run by young people who want to work together in a non-hierarchical and respectful environment. They develop new solutions for global problems they consider to be important and have peer-to-peer capacity building trainings. Raquel aims at creating a new generation of young leaders.

Raquel seeks to increase the impact and representation that young people (14-29 years old) have on local, regional, national and international public affairs by showing that changing themselves, their communities and engaging politically, they can change their reality. She created Engajamundo (“Engageworld“), a platform built by and for young Brazilians to connect and get peer-to-peer trainings on issues that have a direct impact in their lives. By providing the opportunity for young people to establish connections and learn from each other, Engajamundo stimulates problem solving to people wherever they are, creating a channel for action.

To mobilize youth across Brazil, Engajamundo partners with other organizations. Once part of the Engajamundo network, members self-organize around issues they are concerned about, forming working groups to research and develop ideas and local hubs to build actions on each topic. Then, members are encouraged to engage in the trainings, organized all over the country by the youth themselves, both virtually and in person, where they deepen their skills in political, social, and environmental awareness. The groups are interconnected via the online platform that Engajamundo provides. There, they discuss national and international issues in an equal and respectful manner, and decide about joint engagements. This platform, as well as the respectful way of dialogue and debate practiced among the participants, is a new format that Engajamundo introduced. In the future, all participants of Engajamundo shall form a new generation of decision-makers who build their society differently, based on respect, social responsibility, and ecological sensitivity.

Engajamundo is a decentralized organization whose level of influence and action depends on the engagement of each non-funded local hub. In the last few years, the network of local groups spread over 2000 people in 20 states. Engajamundo is especially strong in the north and north-east of the country, where there are less opportunities for young people. Raquel and her organization encourage them to take matters into their own hands.Followers of Engajamundo in other parts of Latin America are starting to inspire themselves to do something similar in their countries.

Engaging young people in public decision-making is a global challenge. In Brazil, young people make up one quarter of the population but are underrepresented in public affairs.
A crisis of political representation has become increasingly eminent among young people who don’t feel well represented by the traditional model of democracy. For example, a study conducted by the Technological and Scientific Development Council (CNPq) in 2012 detected that young Brazilians are disenchanted with the conventional ways of doing public affairs. They complain about the very vertical and hierarchical structures that give them little room for what they have to say. In the same year, the Brazilian Institute of Social and Economic Analysis published the results of research showing that there is still a limited number of young people organized in movements or collectives to discuss public affairs. However, it is significant that they are increasingly structuring themselves outside of the already known parties, unions and social movements.

Brazilian society is still characterized by authoritarian social structures and discrimination. Corruption scandals and a severe political and economic crises left many people with great frustration about democracy and justice. Over 74 percent of Brazilians poorly evaluate their current national government (2017), and 71 percent distrust the justice system (2016), according to the Statistics and Opinion Brazilian Institute (Ibope) and Getúlio Vargas Foundation (FGV) respectively. The public education and public health systems are discredited and general distrust in public systems is widespread. In 2016, when thousands of students from public schools protested for better public education, the responsible politicians demonstrated indifference to their needs. Public leaders don’t consult young people about the needs they have, and young people feel discouraged to involve themselves in public affairs.

Young people often lack the knowledge and capacity to get involved. They know little about existing agreements and policies, and in some parts of the country, like the north and northeast, they lack opportunities for training because of their financial situations. At the same time, many of them wish to better understand current issues and want to contribute to transform existing realities on the local as well as on the regional, national and global level.

Raquel co-created Engajamundo in 2012 to prepare young people to participate in international conferences and, through this process, convert them into locally and internationally recognized influencers of decisions and policies.

After being elected as an Ashoka Affiliate in 2015, Raquel and her team started rethinking the organization with the support of a mentor, Cristiane Pedote. She realized that even though the engagement in international public affairs is important, there are still many opportunities and needs for action on local and national levels – and that change has to start from the inside.

As a young person, Raquel knows that there is a lot of energy and will to bring about change, but there are not so many channels available for that. She is thus working to make Engajamundo the place to be to become a young changemaker.

From its beginning, the organization was created by and for young people, so its structure is horizontal, collaborative, and open, encouraging participation and engagement of any young Brazilian. She keeps the same mechanism to mobilize youth across Brazil, partnering with other youth organizations. However, as time passes, Engajamundo is more well known, and many young people hear about it on social media and become interested in being part of it.

Any young person can engage with Engajamundo using its online platform. Once part of the Engajamundo network, each person can choose different levels of engagement depending on their availability and will: 1) Member: one who is part of google groups, the internal communications platform of the Engajamundo network and receives news about the network, and can attend punctual activities; 2) Local Hub Articulator: young person engaged in local core activities, actions, trainings, campaigns, among others; 3) Working Group Articulator: Working groups are separated by different themes and have online meetings between young people from all over the country, all themes are related to an international conference/process.

In offline workshops, volunteers train and educate young people for advocacy and activism. Engajamundo mentors young people on a variety of topics, from incentivizing community gardens in their local towns to understanding and promoting global issues such as climate change, gender equity and sustainable development. The local hubs invent new solutions for local problems, and if these problems also exist in other parts of the country, other groups take over the idea, adapt it to their local needs, and together they form nationwide campaigns. The groups are interconnected to each other via regular online platforms, such as WhatsApp or Google Groups. There, they discuss national and international issues and make decisions about joint engagements.

Raquel and her organization developed their own methodology to educate and train young people and scale Engajamundo. In the formation stage, volunteers hold different courses to create awareness for the participants regarding social and public responsibility at a local level. There, the participants start to rethink their patterns and perceive themselves as the solution to local public problems. It is also the stage where all the knowledge gathered from the volunteers’ experiences in conferences, working groups and local hubs is passed along to the newcomer. Throughout this process, the connection between the local and global level is constantly emphasized, showing that even simple day-to-day actions can turn the world into a better place. The change of consciousness and the opening of perspectives allows young persons to perceive him/herself as a fundamental actor in the construction of his or her future.

A special method Engajamundo developed is to “sexify“ political issues as they often seem to be quite complex and uninspiring to young people. The newsletter of the organization, names of events and the language used on the online platform is adapted to the language commonly used by young people and in social media.

The next stage is advocacy. This is where participants are presented tools for lobbying, activism and communication that they can then use for inventing solutions and public campaigns, to pressure decision-makers to take better decisions and to monitor the progress that is made. The participants of Engajamundo get involved in the local hubs in their hometown. Meetings of these groups are public and open to all young people. They choose topics they want to work on and organize campaigns and projects to stimulate progress. Some examples include a campaign on water or feminist resistance at Carnaval.

By engaging in public affairs, young people better understand how decision-making works and develop the self-confidence and the capacities to contribute to public affairs. In 2017 a total of 2,000 participants were registered on the platform, and about 15,000 young people participated in local meetings and during public actions and campaigns. Personal meetings and gatherings are organized by local hubs all over the country. All local hubs and online working groups are autonomous. The almost 200 volunteers who work with Engajamundo hold courses and coordinate activities. Raquel and four other young people dedicate their time entirely to Engajamundo and work as national coordinators in São Paulo.

Groups of participants are also sent to international conferences. The groups choose the issue they want to address and elaborate their point of view in collaboration, fostered by an environment of openness and caring. On this level Engajamundo cooperates with other Brazilian NGOs, for example Conectas (human rights), Observatório do Clima (climate change) and Instituto Socioambiental (sustainability) and international NGOs such as Greenpeace and the World Wide Fund For Nature.

In the future, all participants of Engajamundo shall form a new generation of decision-makers who build their society differently, based on respect, social responsibility, and ecological sensitivity.

From a young age, Raquel was always very determined and vocal. When she was only 12 years-old, she coordinated a charity bazaar at an institution that supports children with paralysis. With this experience, she realized at an early age that socially-focused work is indeed a career option she wanted to pursue. Naturally concerned with helping the others, Raquel always held leadership positions in various student life activities such as the student guild, graduation committee, and in creating a dance entity in her school.

At university, Raquel was part of the board of AIESEC, a student leadership organization. Due to complaints about the hierarchical management structure of the organization, Raquel decided to run for president. Although she won in the direct election, the indirect voting had greater weight, and she eventually lost. From that experience, Raquel realized that her mobilization power was not limited to AIESEC. An opportunity came in late 2011, when she saw that Brazilian university students were excluded from the imminent Rio+20 conference. To change that, she and her friends started the Paulista University Committee for Rio+20, an initiative that conducted over 15 events and debates to raise students’ awareness regarding the agendas to be discussed at the conference and train them so they would know how to influence the process according to their goals. The Committee would later become Engajamundo.

Raquel’s belief that everything is better when created together is evident in the structure of Engajamundo, where everything is built in a collaborative and open manner. Also a strong believer in the power of youth, Raquel did not create the organization for herself, but for the world.