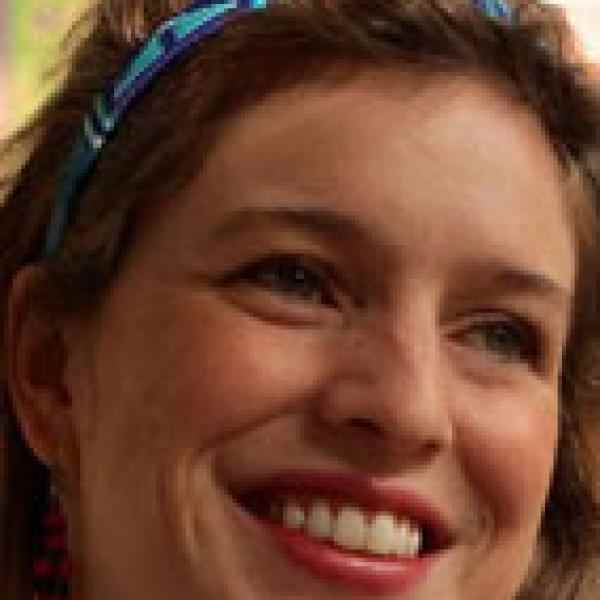 Safarni
Raphaelle is humanizing intercultural relationships for children. As a start, she is building an empathetic, culturally sensitive generation. In doing so, Raphaelle is breaking the cycle of elitism…
Read more

Raphaelle is humanizing intercultural relationships for children. As a start, she is building an empathetic, culturally sensitive generation. In doing so, Raphaelle is breaking the cycle of elitism that is associated with opportunities for geographical mobility, exposure, and intercultural experiences.

Raphaelle is popularizing inter-cultural education for Egyptian children and providing a framework for diverse human connections. Instead of positive human-to-human intercultural contact being an opportunity only for the elite, Raphaelle is equalizing the exposure to inter-cultural learning—providing an opportunity for underprivileged children whose families lack the financial ability to travel abroad.
Raphaelle is engaging underprivileged children in “touch-feel” simulated travel adventures that harness their imagination. These simulated travel adventures provide meaningful intercultural interactions with people from other cultures, whom Raphaelle calls the “foreign friends.” Under the name of Safarni, which in Arabic means “Allow Me to Travel,” Raphaelle engages the expatriate community in Egypt, Egyptian university volunteers, facilitators, and local Citizen Sector Organizations (CSOs) in one setting with underprivileged children using a curriculum she developed for meaningful intercultural interactions. Such interactions are held in the children's very own neighborhoods, so that the children do not have to go far to discover the world's cultural diversity.
Raphaelle’s simulated travel adventures presents an unprecedented opportunity for the many Arab children that simply have no opportunity to experience ‘the other’ either due to economic reasons or difficulties in obtaining visas. By creating a framework for intercultural connection, Raphaelle both empowers children and revolutionizes their world-view by teaching them to respect difference, celebrate diversity, be curious, ask questions, increase their empathetic skill set, and allow them to be more socially and globally aware. Hence, Raphaelle, through her educational methodology, contributes significantly to changing xenophobic and intolerant attitudes in the Arab region.

Egyptian children from underprivileged backgrounds have little to no opportunities for meaningful, authentic, and intercultural connections with people from different cultures because many people cannot afford to travel abroad and gain direct first-hand experience of other cultures. Additionally, children are raised in a society with an education system that suppresses imaginative learning, research, and curiosity. The current educational policy in Egypt does not include intercultural learning and, in fact, breeds xenophobic attitudes. A British based NGO that monitors peace and cultural tolerance in school education, IMPACT-SE, found that Egyptian schoolbooks before and after the revolution maintain “intolerant attitudes.”
Consequently, gaps in diverse human connections make young Egyptian children in underprivileged communities more prone to develop xenophobic and prejudiced attitudes. These attitudes can easily form into general distrust of ‘the other,’ which subsequently prevents empathetic learning, finally resulting in violence, discrimination, and a vicious circle of hatred.
Other organizations that focus on intercultural learning involve actual travel outside of Egypt. Therefore, access to these other organizations is restricted to upper-class children whose parents can afford to pay. While there are some organizations that provide intercultural activities, the experience they offer lacks authenticity. This is because rather than creating a platform for a “touch-feel” connection that encourages children to go to the source instead of just hearing about it, they mainly use books and information from the internet about a country or culture written by non-natives.

Raphaelle was born in France to a "pied noir" (French born in Algeria) Diaspora filmmaker father who passed on to her a passion for film from an early age. Raphaelle’s former movie projects focued on documenting people’s lives and cultures. For example, she produced a documentary of one Columbian family’s daily life in Columbia, in addition to another movie that documented the journey of a traveler around the world.
Raphaelle's mother did intercultural studies and founded a museum which focused on alternative educational approaches. Hence, Raphaelle's connection since a young to the world of social innovation, play-based education and inter-cultural connections.
Between the ages of 7 and 14, Raphaelle lived in the USA during which she experienced her first entrepreneurial endeavor, creating a bracelets business and raising money for different causes. Upon moving back to France at the age of 14, Raphaelle attended an international school where she was able to interact with, and learn about, many different cultures. One abiding memory of her school experience was a conversation between two of her friends, one Lebanese and the other Israeli, on the conflict between Israel and Palestine. The content of the conversation was not necessarily important for Raphaelle, more so the fact that her two friends had the opportunity to share passionate perspectives in a respectful manner, seeing diversity of perspectives as normal.
At the age of 19, Raphaelle had an exchange year in Spain. The experience was an affirmation of her love for discovering new cultures. She not only immersed herself in the Spanish language and culture, but she also started learning the Arabic language—something she had long yearned to do for her Arabic heritage and upbringing.
Her Arabic teacher was an Egyptian man living in Spain who she developed a close relationship with. He suffered from a significant amount of racism and general prejudice while living in Spain, which was an eye-opening moment to Raphaelle. Encouraged and supported by her Arabic teacher, Raphaelle eventually moved to Egypt in 2009. She chose Egypt because she wanted to experience the Arab world, improve her Egyptian dialect, and be in the cultural hub of the Arab region to continue her interest in filmmaking. During this time, she became increasingly aware of inter-cultural tensions on all sides.
Raphaelle concluded that much of the fear of the other, found on all sides, was born from a lack of truly authentic human connections with people from different cultures, limiting opportunities to recognize our shared humanity. During this period of her life, Raphaelle fleshed out earlier ideas she had on implementing inter-cultural education for children while concentrating on creating the necessary conditions that would allow underprivileged Egyptian children to experience different cultures authentically, despite not being able to afford to travel. She was convinced that authentic “touch-feel” human experiences with different cultures would alter the perspective of these children and their education and would de-escalate intercultural tensions.