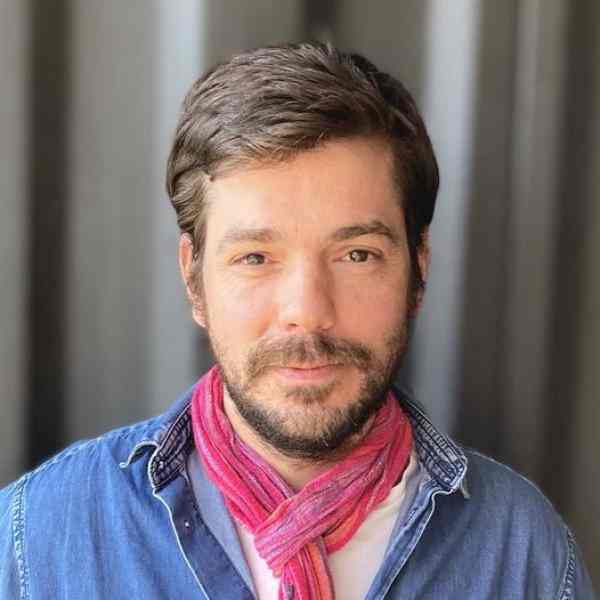 Rafael is using technology as an empowering tool to enhance entrepreneurship and employment in good gastronomy, focusing primarily on youth, women, migrants, and seniors. His foundation, Gastronomía Social, has developed a hybrid platform for gamified training in solidarity, bringing ideas, learners, and employers together under the umbrella of gastronomy as a driver of social, economic, and environmental change.

Rafael is shaping a movement which has the social aspect of the food sector at its base, addressing unemployment and introducing creativity and tech to keep people engaged so that they can obtain a certification and eventually turn their passion for cooking into a source of income, by founding or joining good-gastronomy companies. Building on his experience as an entrepreneur and orchestrator of food festivals and assistance campaigns in four countries, Rafael reached the conclusion that gamified learning was the key to empower foodies, foster good entrepreneurship, and make gastronomy better in all its aspects.

Rafael is committed to changing the food sector from within. It is a huge industry which creates countless jobs, but all too often is marked by labor abuse, high turnover, instability, precariousness, and mismanagement – using and wasting countless natural and human resources. The goal is to revert the overall extractive character of the gastronomic and tourism industry based on an innovative hybrid training system that provides incentives for trainees from different vulnerable user groups such as youth, women, migrants, and seniors, and connects them with multistakeholder teams – from grassroots organizations, chefs, academics, foodies, restaurant and other food business owners, government and church officials, food banks, farmers, investors. and sectorial associations. Gastronomía Social uses three main pillars: environmental education, artisanal culinary traditions, and innovation/creativity/soft skills; and four well-developed programs: food assistance campaigns involving restaurants; micro-entrepreneurship for women; on-site bootcamps for youth; and “Food for All” training courses (Escuelas Comida para Todos, CPT). They also lead specific actions like cooking for/with migrants, and the creation of a student’s cooperative in a poor area of town.

Rafael’s goal is to reach broad layers of marginalized populations, involve all of Santiago’s 5,000 restaurants, and of course to see FGS replicated in other contexts. His manual of best practices is available to all interested, in Spanish for now, based on the basics: water, food, air, shelter & affection. Affection, above all.

While Chile has been an economic success story for decades, this growth has left Chile as the most unequal country among all OECD countries, according to OECD’s recent data which shows Chile’s income gap as 65%, above the OECD average. Social inequality particularly affects vulnerable women, youth, migrants, and seniors in Chile and is reflected in the lack of tailored training and education opportunities, the precariousness of jobs, and high unemployment rates, in a scenario of persistent drought (which leads to increasing food scarcity), rising food prices, and the enormous economic loss which is food waste. The pandemic has made the very noticeable socio-economic differences even more evident, affecting people living in those parts in the country with high rates of multidimensional poverty, migration, and unemployment even more than the average citizen. Chile classifies the poverty line as earning less than 567 USD per year. But a recently published study shows that over half of Chilean workers earn less than 520 USD. One third of the labor force is not formally employed, and therefore must deal with an unstable income, in a country where a kilo of bread costs 2 USD, with constant increases. (To illustrate the challenge, those who earn minimum wage make 2.40 USD/hour and 90% of pensioners receive a monthly amount of 228 USD.) The pandemic, the war in Ukraine, and the persistent drought in Chile have hit the gastronomic and tourism sector – the largest employer in the country – especially hard and destroyed typical jobs along the supply chain. Youth unemployment is high, with 20% of youth reporting that they neither work nor study. Young workers are also more likely to be in informal employment.

Poverty levels also impact women and migrants more. Since the nineties, the number of exclusively female-run households had increased from 20% to 40% in 2019, with this tendency on the rise. And since caregiving is not remunerated, the workload of women is much higher. The number of immigrants from poorer countries has increased to 1.5 million, with those in poverty at almost 20% in 2020, and violent anti-migrant protests have become more frequent. New shantytowns for migrants on the outskirts of Santiago are growing fast; the population of the biggest is estimated at 25,000 after the pandemic.

In 2020, only 27% of microentrepreneurs had received a form of training. In general, technical training is under-appreciated, and university education is overrated: there are far too many private universities for a small labor market. School curricula do not include problem solving. The Chilean State offers an educational model based on a tax incentive scheme for companies called SENCE in which Rafael’s foundation is also inserted, but the amounts that trainees can possibly earn are extremely low, the system is bureaucratic, and its focus is not holistic, so it is often not considered as an alternative for young people neither in employment nor in education or training (NEET). Existing training programs are often perceived as a source of cheap labor for companies who save on training, not empowering people.

Chile and Mexico are the most overweight and obese countries in the Organization for Economic Co-operation and Development (OECD), with 75% of its population affected, and recent studies on multidimensional malnutrition indicate socioeconomic factors as the primary cause. At the peak of the pandemic, over 2 million Chileans were classified as food insecure, nowadays the figure is at about 1.5 million. The World Bank also links staple food inflation (7.7% in 2021 in Chile) to adverse weather conditions caused by the climate emergency. At the same time, nearly 30% of food is wasted. This means water, labor, and money thrown away each day, especially in fresh produce which is too expensive for the more vulnerable to purchase. Accessing mental health care through the public system is virtually impossible, self-medication is rampant, and added to the stress of the pandemic, Chileans are coping with the trauma of the social unrest that started in October 2019. It is likely that other violent reactions will follow if the pressure cooker of under- and unemployment and food/water security are not alleviated any time soon.

Fundación Gastronomía Social (FGS) goes after better-paid, decent jobs for better-educated people making healthier food. FGS was founded in May 2019 by Rafael and three other changemakers out of the desire to alleviate both unemployment and dramatically rising food insecurity in the wake of the pandemic, which was then exacerbated in Chile not only by Covid, but by the massive street protests in October 2019. They called their first initiative “Comida para Todos” (Food for All). It has since then developed from an emergency assistance campaign to a complete set of innovative social food solutions. Rafael has expanded parts of this campaign into two other countries so far: Peru and Spain, with Bolivia and Ecuador close behind.

The hybrid training hub called Formación Gamificada Solidaria (FGS, using the same acronym as his foundation Fundación Gastronomía Social) that Rafael and his team are implementing under an open-source approach financed by the Inter-American Development Bank (IDB), has both in-person and digital components, in restaurant kitchens and online. It takes everyone interested in any aspect of food on a learning journey where they can buy, earn, spend, and donate tokens according to their needs and skillsets. The traditional user experience would be a young person not really interested in studying or working but maybe…in gaming! Since access is free for those on scholarships, and the platform is motivating, chances are high that participants work their way up, earning recognition in the form of tokens for each learning unit successfully mastered. And then they will eventually attend an in-person mentoring/cooking session and meet with peers. The expected result is to either feel inspired by a certain technique/product and launch their own endeavor, or to receive a call for a job interview with a company impressed by the number of tokens accumulated. Another example might be a famous chef who decides to share a well-kept recipe and donate the tokens earned by the pay-per-views to finance an in-person training course for a migrant person. The invitation is open to promote everyone’s products on the platform and on-site in the training centers, creating a food community made up of restaurants, consumers, local commerce, markets, upcyclers, culinary schools, urban farmers, distribution companies, municipalities, CSR departments and last but not least, food policy makers.

A born networker, a trained communicator (publicist) with an entrepreneurial background in gastronomy, Rafael creates inclusive communities wherever he goes with his joyful, caring enthusiasm. Rafael is a migrant himself: he comes from a Spanish family running restaurants and has resided in Chile since 2005. Married to Claudia, who also manages her family’s restaurant, he is father to two adolescent daughters, Alegría and Helena. By now he counts 17 years linked to the world of entrepreneurship and collaborative creation in Latin America around better food and likes to stress the ethical principles that his family has always applied in its business.

Upon his arrival in Chile, Rafael was surprised by how little love the Chilean mainstream gastronomy shows for the country’s abundant natural resources – boiling it too much, and the prevalence of meat over fish in Chilean’s daily fare, despite the Mediterranean climate which allows for a perfect dietary balance. Until today he laments the lack of imagination when it comes to managing fresh, healthy produce and the consequent high obesity rates. What affects him most is the complete separation of elitist gastronomy with its merely extractive, competitive character, from the crude reality of the majority of the population where he sees, in his own words, “a universe of tremendous social pain.”

Hence, Rafael set out to be an activist for food and gastronomic ethics. In 2007, he founded Gourmalia introducing a variety of natural and functional foods in the then-novel format of an online store. Then came Foodies, an online platform which today has 45 employees. And Ñam, his production company for gastronomic projects and cultural festivals created in 2012, (motto: “Change the World by Eating”), which organized about 30 food festivals in eight years. After facing bankruptcy due to the disruptions caused by Covid, he co-founded Fundación Gastronomía Social taking the experience gained in Ñam to the next level. In May 2020, Rafael co-created the collaborative solidarity platform in action on sustainable food systems addressing both hunger and unemployment in the gastronomic sector, “Comida para Todos.”

Rafael is a leader who creates trust, cultivates ample circular governance, empathy and appreciation, delegates and creates learning spaces in conflict resolution. He says: “I believe in social innovation, radical collaboration, collective intelligence and open source as tools of life, as the greatest resource on the planet. What I dream of in the short term is to massify the open source training platform, in the mid-term we will found one or two companies owned by the Foundation, to generate income which is reinvested, in order to become more independent from donations, and in 10 years I hope that FGS will be one big inclusive physical/digital go-to space where everyone in the food chain (including those who “only” eat) perceives themselves as proactive parts of the most potent motor to transform the sector into a healthy space for people and the planet, where people can meet, where the industry will develop their CSR programs, that it will be an agile hub of collective intelligence, prototyping, analyzing and scaling.”

Deeply rooted in his small team of five permanent, and three part-time consultants, he works tirelessly at defining new projects, does all the PR, and spends a lot of time in the field.