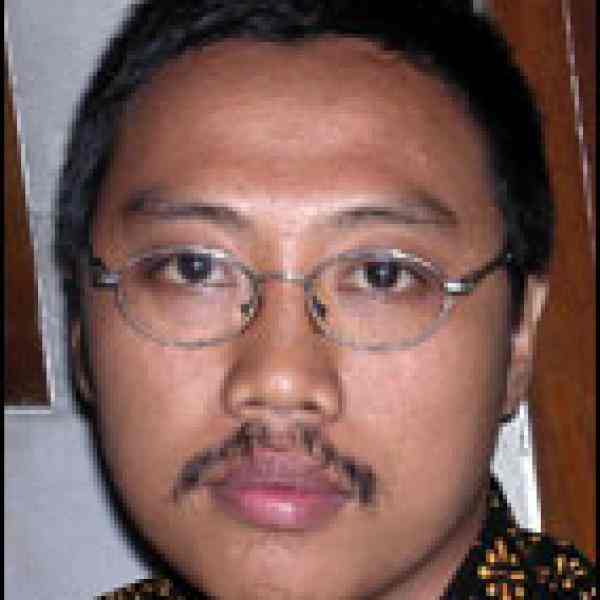 Indonesia’s rivers are becoming more and more polluted with industrial waste, but most Indonesians are unaware of this destruction to their environment. Prigi trains children and adults to become amateur “environmental detectives,” conducting their own scientific research and publicizing it in the media.

While most people think scientific data is the exclusive domain of academics, Prigi believes even ordinary citizens can collect and use scientific data. He introduced a simple way to collect environmental data that anyone, even children, can use. Prigi’s “Surabaya River Detective Program” educates children to become agents promoting a healthy environment campaign. Such activities make clear the connection between human health and the environment.
In addition, Prigi is teaching communities how to use the media to persuade their government to enforce industrial waste discharge regulations. He instituted a Posko Ijo (Green Post) in which representatives of communities meet with government officials and industry owners to discuss positive solutions together.

In Indonesia, irresponsible industrialists often dump untreated factory waste into city rivers rather than comply with government health and environment regulations. Not only does this harm the river ecosystem, it also jeopardizes the health of millions of urban Indonesians who live along the river and rely on it for their water. Rivers running through almost all industrial cities in Indonesia are heavily polluted, but the worst examples are found on the island of Java, home to 100 million Indonesians. A local public hospital in Surabaya, East Java, reported that two to four percent of the population (primarily children under 18) living along the Surabaya riverbanks suffer from cancer, likely the result of consuming contaminated river water. Locals use the Surabaya River for washing, bathing, and drinking. People living on the river banks and those living downstream along the coastline consume fish harvested from the polluted river.
In July 2004, two people in North Sulawesi died from mercury poisoning. Subsequent investigations revealed that hundreds more people are suffering from diseases linked to eating fish with high levels of mercury.
Because government agencies are often disorganized, enforcement of environmental regulations is sporadic. The national Environmental Ministry does not have a strong presence at the local level, so that when factories violate environmental laws, they receive light administrative sanctions. In the rare instances environmental crimes are prosecuted, the government often loses because of bad evidence or witness bribing.
Attempts to halt pollution have failed because citizens are not motivated to take action. Few are aware of the seriousness of the problem, and continue to use the polluted waters as if they are clean. Information about the realities of pollution and its dire consequences is simply not available to the public. The government initiated a River Cleansing Program in 1999, and some environmental stakeholder consortiums have conducted temporary social mobilization activities, but these efforts never infiltrated the popular consciousness. Without good data, citizens do not know who to blame for the poor quality of their wells and waterways.

At the community level, Prigi brings the leaders of riverside villages together to share observations and concerns about the water. This helps people understand that what happens upstream affects everyone living downstream. People from different villages are naturally suspicious of one another, since they often compete for limited industrial jobs, but Prigi’s meetings help them see that they have a common problem that can only be solved by cooperation.
Prigi is widely regarded by both government and citizen groups as one of the best sources of information on environmental degradation. He aquires data not by courting academic researchers in universities and think tanks, but by training citizens to become amateur scientists. He makes collecting data fun and accessible, so that people who would not normally be interested in observing water conditions are instead enthused by the prospect. For example, Prigi has created a special “pollution boat tour” that takes tourists on an interesting and educational tour of the river. The proceeds of the tour go to fund Prigi’s anti-pollution work.
Prigi works especially closely with children as they are the group most vulnerable to pollution-induced disease. Employing a child-to-child approach, Prigi has attracted 800 children and youth into his campaign, up from 81 children only three years ago. The children collect environmental data to create informational books, posters, films, and press releases to attract the attention of the public, the Government, and the Legislature. Acting on their own initiative, children send letters to the newsreaders column in local newspapers, drawing attention to water pollution. The children’s active involvement has also helped to raise awareness of the problem in their families, their communities, and the general public. Their commitment inspired one schoolmaster to develop a school community radio broadcast, run by students and dedicated to campaigning for a healthier environment. The radio station reaches around 25,000 listeners. As a result of these efforts, the government has recently allocated funds for further investigation into the Surabaya River problem.
Prigi uses the mass media, including print, radio, and television, to disseminate the children’s research results. His understanding of how the media work allows him to command a whole news cycle for weeks, keeping a story in the public eye. Journalists are especially drawn to stories involving children, and Prigi takes advantage of this to keep his work in the news.
Currently, Prigi is working to establish similar programs in Sumatra and Sulawesi, and he plans to conduct a national event unveiling his research results on river pollution. This information will then be used as the basis for river resources management planning in Indonesia. Together with two Ashoka Fellow organizations, Prigi’s “River Detective” program was documented as a practical method for environmental education in the Asia Pacific region.

Prigi’s mother was a well-known dressmaker in his village. He learned to communicate with people from all walks of life from delivering finished dresses to his mother’s clients. Over the years, he has honed the communication and public relation skills he developed as a child. Prigi’s father was a philosopher, deeply inspired by Bima, a traditional character in Indonesian shadow puppet theater who is always honest, consistent, and ready to follow his conscience.
Prigi was a top student throughout elementary and secondary school. Prigi’s early love was biology, and he began actively conducting his own independent scientific research. His obsession was fulfilled when he became a biology student at university. In his third semester, he joined the Biology Student Research Group and started conducting research on the potential offered by mangrove cultivation on the Surabayan coast. His efforts led to the west coast area of Surabaya becoming a mangrove conservation tract. Years later, he successfully fought against a plan to convert this protected area into a housing estate. In 1999, he found chemical water pollution along the coastline; he traced the chemicals to the Surabaya River. He conducted further research on the river, uncovering the effects of polluted river water on the lives of the locals and their children. Since then, he has dedicated his life to cleaning up the rivers and bringing clean water to the people of Indonesia.