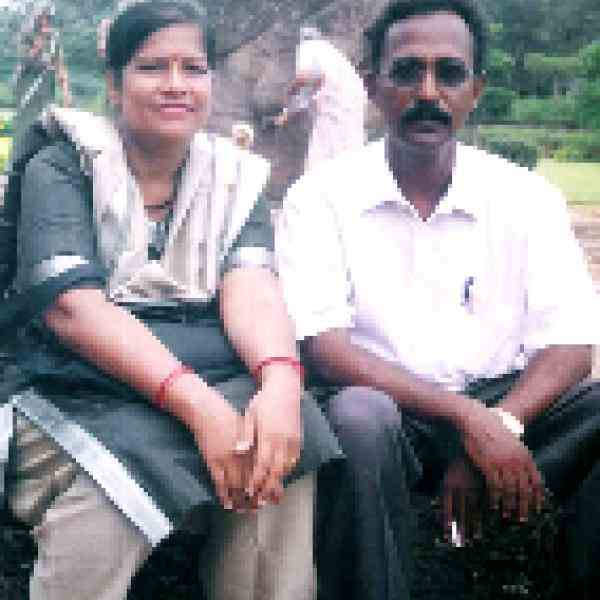 By setting up rural labor associations to monitor the transparent and effective implementation of the new National Rural Employment Guarantee Act, Seema Prakash and Prakash Michael are creating a grassroots democratic process that improves food security and rural labor relations in India.

The National Rural Employment Guarantee Act is the first legal entitlement that grants poor unskilled daily wage workers the right to work, guaranteeing a minimum 100 days of employment. The scale of operations, money involved, and government machinery make the Act vulnerable to corruption and mismanagement. Seema and Prakash, a husband-and-wife team, are bringing together rural workers, who are usually considered “unorganized” or “casual” workers, into a new kind of collective in which they can negotiate for better treatment as recognized employees. They are equipping the wage workers with the wherewithal and legal status to create standards of employment; seek legal redress for corrupt delivery mechanisms; legitimately claim compensation and penalties; and ensure food and health security through the standardization of wages. Rural workers will also be able to take advantage of specific provisions in the Act aimed at women, children and the disabled; participate as a collective force in local self-government; and drive development through the formulation and implementation of plans for public works projects taken up under the Act. By opening up a new window to livelihood security, Seema and Prakash are also seeking to check “distress migration”, meaning people leaving home in a desperate search to feed themselves, and pave the way to relieve urban areas of an exploding migratory population of unskilled workers. Seema and Prakash are ensuring that corruption does not eviscerate a powerful new law that could potentially change the face of rural India and help rid it of poverty, disease and indebtedness. If successful, it could be a pioneering means of overcoming the obstacles encountered by the rural poor and give a new lease of life to the labor movement in India.

About 720 million Indians live in rural areas. The unemployment rate in the country is said to be 7.8 percent and rising, and this has a huge effect on migration and food security of the rural poor. The country needs to create 60 million jobs over the next five years to keep unemployment under control. Exploitation and the lack of work lead to extreme food insecurity, measured in migration, malnutrition, and even starvation deaths. The NREGA seeks to provide social security to the rural poor through the guarantee of a minimum of 100 days of employment per year working on government-funded projects such as building roads, digging canals, and clearing land, at a daily wage of 60 rupees. It also stipulates worksite facilities such as toilets and clean water, a quota for women workers, and unemployment allowance if there is no work available. One member of every rural household is entitled to participate. The central government is funding this scheme with the states expected to contribute 10 percent of the cost. The Act is being implemented through the administrative units of each state. Workers in the villages deal directly with Panchayats or local elected governing bodies that report to district officers. The first problem of such a complex delivery system is communication. Phase I of the Act was launched in February 2006 covering 200 poorest districts of the country, but neither the implementing bodies nor the rural workers have adequate information on the Act, or the scope of it. Without a system of vigilance and regular monitoring, corrupt practices and operational mismanagement will hamper the operations of the program. This risk is high especially when lots of money is at stake and major transactions take place between officials. It has been estimated that only about 25 percent of the program funds actually reach the intended beneficiaries. Workers’ voices are further suppressed by archaic state laws and the lack of any effective way for them to complain. A field survey carried out in 11 states between April and May 2006 on the implementation of NREGA highlighted the following realities: public awareness of the scheme was as low as seven percent in states such as Uttar Pradesh; information pertaining to procedures was shared only in 30 per cent of Gram Sabhas in the districts of Madhya Pradesh; Incidences of discrimination on the basis of caste, community, disability and proximity to local and district government officials are also rampant. Along with these irregularities, the intended beneficiaries do not participate in planning and monitoring the program. The Act came into being through pressure from civil society, but there are strong forces opposing it and seeking to have it withdrawn on grounds of inefficiency and corruption.

Prakash and Seema are creating a monitoring and complaint mechanism to ensure that the NREGA fulfills its goals. Their strategies to do so take into account three crucial factors—outlays must be matched by outcomes, productive assets must be created, and the guarantee must be implemented in the true spirit of the Act.   Seema and Prakash have learned that when the rural poor demand entitlements from government officials, they have to do it in an informed and organized way. Because they are abjectly poor, and because they are tribal and Dalit peoples, they tend to be mistreated by the local government.  While their initial interaction with the administration was confrontational, they found a good example was necessary to show the administration that communities could help manage government programs to mitigate with hunger. They took up the challenge of rehauling an Anganwadi, the state-operated Integrated Child Development Service that caters to the health and pre-school education needs of children; and the health needs of pregnant women, nursing mothers, and adolescent girls. The successful experiment is now managed completely by the villagers, and has drastically reduced malnutrition deaths. A landmark case involving five unskilled laborers and their right to minimum wage, fought for and won by SSSS, catapulted Seema and Prakash into the limelight and firmly established their credibility in the communities.            As soon as the NREGA came into force in February 2006, Seema and Prakash started organizing the rural labor force in order to register them as an active legal body. This group would serve as a watchdog for the monitoring and implementation of the Act and the forum for effective lobbying for standards of employment and equal wages throughout the country.  The final blueprint for the state-registered bodies is in the making. Members are required to hold job cards issued by the government and must have done at least ten days of work under NREGA to qualify for membership. Seema and Prakash are also using another recently-enacted historic Act to monitor whether NREGA is working—the Right to Information Act, taken to the grassroots by Ashoka Fellow and Magsaysay Awardee Arvind Kejriwal. This Act provides citizens with the right to access information from public authorities. For example, workers under NREGA can now ask for information about labor regulations and entitlements; raise questions about any lapses in the implementation of the provisions in the Act; and demand answers to why penalties have gone unpaid.Educating the workers on the provisions embodied in the Act and how to use it, is the most crucial component of Seema and Prakash’s work. Demonstration of the uses of the Act is important and they are doing so by helping them to demand for specific rights such as the setting up of drinking water facilities and sheltered areas at worksites. Of special concern are the rights of women with regard to equal wages and the disabled within the scheme. Their research has shown that economically empowering women has a direct impact on the health and nutrition of families. They are helping the workers groups to obtain facilities for children under the age of six and avail of the provisions for jobs on a priority basis for mothers with malnourished children. Among other marginalized groups, they have already started organizing people afflicted with leprosy and ostracized by society, to demand their rights under NREGA. Seema and Prakash are also involving the labor groups in the local development process. The Gram Sabhas are usually unable to plan for stewarding resources effectively and a bulk of the funds allocated under NREGA remains unused. The Act provides for eight categories of development work, including water conservation and harvesting, drought proofing, reforestation, irrigation works, and improving rural connectivity. Seema and Prakash are already educating workers groups on how to draw up plans to enhance resources in their areas, present them to the panchayats through the gram sabhas and access the funds allocated under these projects. The first such project undertaken by them has been the recharging and renovation of a traditional water body in the area and the building of a road.The dissemination of information, according to Seema and Prakash, has to be a continuous activity if ultimately the labor forums are to be self-sustaining with clear leadership roles. They are creating a database with information that will help the groups address issues better. The media is an important partner and media kits with updated information are handed out regularly. Through a series of investigative stories, the media has brought special attention to the area with regard to health and nutrition services and employment generation schemes.The NREGA is currently under implementation in 200 districts in the country and will hopefully be extended to all the 600 districts in the country in five years. Beginning their work in the villages of the Khandwa district of central Indian state of Madhya Pradesh, Seema and Prakash are simultaneously working in 18 districts through a network of partners, drawn from organizations engaged in the nationwide Right to Food campaign. They are confident of organizing the unskilled workers in the entire state in three years’ time and hopeful of their model’s replication throughout the country in five years through inter-state alliances. The next step, as they see it, is to increase the scope of the Act by way of standardizing minimum wages to coincide with the actual calculated amount required to prevent malnutrition and step up the number of days of guaranteed employment. They are now in the process of identifying strategic state and national partners for the proposed workers’ associations.

Originally from Maharashtra, Prakash spent his childhood years in Orissa. Certain that he wanted to devote himself to public service, he completed a Masters in Social Work, and began working with Indian citizen organizations. Prakash always sought to get out from under the bureaucracy of large organizations and develop stronger bonds with the rural poor.It was at this time that he met Seema, a school teacher, who belonged to a conservative Brahmin family of Uttar Pradesh. Seema’s childhood had been shaped by her interactions with people from lower castes and marginalized communities, essentially employees of the municipal department where her father worked. The indignities and oppression suffered by them left a deep impression on her mind. Seema and Prakash, in spite of family opposition since Prakash was Christian, decided to marry and dedicate their lives to the cause of social justice.Born and brought up in urban areas, they decided to test the strength of their mission by choosing one of the most backward areas in India, the Dhar district of Madhya Pradesh, to work with the Dalits and realize their vision. They taught in a school and simultaneously began conducting adult literacy classes. This was the beginning of a deeper understanding of their problems, at the root of which lay the lack of livelihood options.It was their work with the Dalit and tribal women of the community that gave them the courage to demand the stipulated minimum wages from the panchayats. The following struggle, which made the couple vulnerable to physical assaults and death threats, culminated in the state being directed by the Commissioners of the Supreme Court to introduce remedial measures. It was also the time when Prakash and Seema decided to focus on the problem of food security by participating in the Right to Food Campaign. They recognized the opportunity offered by NREGA and lost no time in setting up the mechanisms to ensure its full and effective implementation.