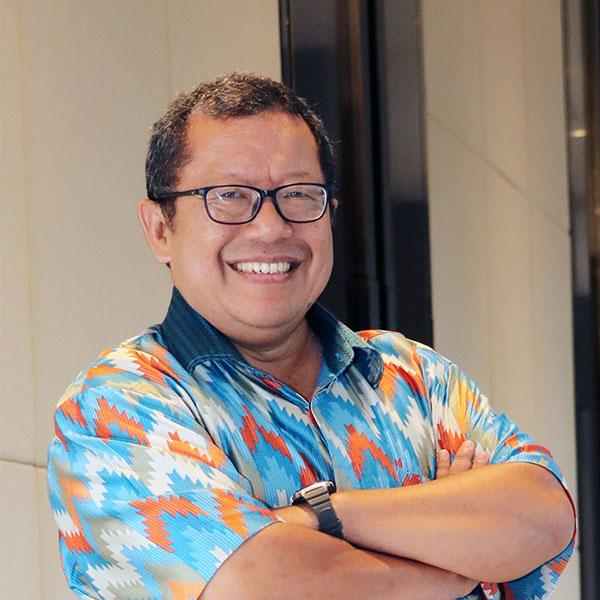 Onno is playing a central role in transforming Indonesia into a knowledge-based society by pioneering the development of low-cost technologies, recruiting and mobilizing a growing network of “techies” committed to broadening access to and use of the Internet, and advocating related changes in public policy and education.

Convinced that access to information and broad participation in knowledge formation are integral to survival and poverty alleviation in an increasingly globalized economy, Onno is pursuing a concerted range of strategies to stimulate and broaden access to the Internet. His goal is to engage rapidly increasing portions of Indonesia’s population in knowledge-using and knowledge-generating endeavors.
A key element of those strategies has been the creation and nurturing of a network, or virtual organization, of like-minded individuals who are committed to “democratizing” Internet access. Over the past dozen years, Onno has worked with hundreds of such individuals who are spearheading the development and use of technologies for bringing affordable and cost-efficient Internet access to schools, grassroots communities and citizen groups. To broaden their reach, Onno and his colleagues have produced an impressive and rapidly growing body of books and papers in the local language (Bahasa, Indonesian) on the relevant technologies and their application in successful endeavors to expand Internet access and use in Indonesia. Operating on a “knowledge is power” philosophy, they have also begun efforts to introduce and expand Internet access in the Indonesian educational system.
Complementing those efforts, Onno and his associates are also engaged in advocacy work aimed at the adoption of public policies that will provide an enabling environment for the rapid expansion of Internet access and the development of a knowledge-based society.

Although available data are sparse and inconsistent, there is wide agreement that Indonesia lags well behind many of its Asian neighbors in Internet access on a per capita basis. With a total population of some 240 million, Indonesia is the world’s fourth-ranked country by population size. Recent estimates suggest, however, that no more than 12 to 16 million Indonesians (5 to 7 percent of the country’s total population) enjoy even limited access to the Internet and that only some four million Indonesians use the Internet on a regular basis. For the vast bulk of Indonesians who are denied the use of that powerful knowledge-acquisition tool, the costs in terms of educational attainment, quality of life, and income-generating opportunities are substantial. And for the nation as a whole, which is struggling to maintain and expand its economic opportunities in an increasingly competitive world economy—failing to keep pace in knowledge acquisition and dissemination pose a very grave threat.

Why has Indonesia had relatively poor performance in bringing Internet access to its rapidly burgeoning population? The factors are many and varied. Some have their basis in geography—there are communications problems inherent in a vast archipelago stretching some 3,200 miles eastward from Sabang in northern Sumatra to Merauke in Irian Jaya, with existing tools available in limited language offerings. Others stem from the longstanding neglect of Indonesia’s educational infrastructure during a lengthy period of authoritarian rule, ended only 6 years ago. But many of the most important—and more readily correctable—factors adversely affecting the prospects for a rapid expansion of Internet usage are regulatory measures and other public policies that stifle creativity and otherwise impede the development and spread of affordable Internet access.

At the core of Onno’s efforts to democratize access to the Internet is a virtual network of young “techies” who share Onno’s commitment to engaging Indonesia’s citizenry in knowledge-centered activities. That network began with the establishment of a student club, the Computer Network Research Group (CNRG), at the prestigious Institute of Technology Bandung (ITB) in 1994, when Onno joined the teaching staff, with a newly minted doctorate in electrical and computer engineering. At Onno’s invitation, a number of talented students with a shared conviction of the Internet’s importance in building a knowledge-based society joined forces in the CNRG to advance awareness, understanding, and exploitation of the Internet’s potential.

In the ensuing years, the scope, scale, and impact of Onno’s network has rapidly assumed national (and even international) dimensions. Network members have authored and published a wide array of books and articles in Bahasa Indonesia in an effort to reach wide non-English speaking audiences. They have also served more directly as “change agents” at the community level by developing and experimenting with low-cost technologies to extend Internet access far beyond academia and disseminate the results of those initiatives. Particularly since 2000, when Onno left ITB’s teaching staff to devote his full energies to broadening Internet access and usage as the major vehicle for the creation of a knowledge-based society, the growing ranks of network members have played a central role in amplifying the impact of Onno’s work.

In their endeavors to extend affordable Internet access to previously excluded communities and citizen groups, Onno and his network colleagues have employed, and refined a low-cost Wireless Fidelity (WiFi) technology approach. WiFi is essentially the use of radio (instead of a telephone line or cable) for the most user-proximate stage of Internet access. It employs off-the-shelf, relatively low-cost Wireless LAN (Local Area Network) equipment, and its range can be extended to cover an entire neighborhood by a simple external antenna. (The antenna can be locally produced and marketed at a unit price in the US$15-$20 range, or alternatively, a homemade version can be readily constructed using a metal potato-chip can.) The radio equipment normally uses the 2.4 GHz (gigahertz) band width, and it operates at 11 Mbps (megabits, or millions of bits, per second), thus achieving a significantly higher speed than conventional dial-up Internet access. In varied settings across Indonesia, experiments with significantly less expensive locally-managed and self-financed WiFi systems facilitated by members of Onno’s network have successfully demonstrated that they can provide Internet access of higher speed and quality than offered by conventional dial-up systems. The cost per household is in the US$15-$45 per month range for 24-hour access—a cost that is dramatically lower than that of dial-up systems. The WiFi system’s cost is admittedly still well beyond the means of typical low-income Indonesian households, but it is affordable for growing numbers of middle-income families. Onno estimates that approximately 200,000 neighborhood users have already been connected to the Internet as a direct result of his work. “How-to” instructions for the creation of such systems are available on an “open source” basis, as well as soft copies of related books and articles, on the network’s Internet site. The stage has thus been set for an accelerated growth in the number and reach of such systems.

Onno and his associates are also engaged in continuing efforts to bring Internet access and usage to growing numbers of educational institutions, particularly at the high school, vocational school, and university levels. Although the relevant official data appear to be flawed and inconsistent, Onno reports that there are some 220,000 schools in Indonesia, including 10,000 high schools, 4,000 vocational schools, and 1,300 public and private universities, only a small minority of which currently enjoys Internet access. (Onno estimates that the number of educational institutions in Indonesia that are currently linked to the Internet is in the 4,000+ range, including some 200 universities and 270 vocational schools.) In a multi-pronged campaign to expand those numbers and to encourage those schools to develop programs that encourage and equip their students to capitalize on the Internet’s educational opportunities, Onno and his network colleagues have organized meetings, seminars, and workshops with school administrators and teachers in more than 3,000 schools in major cities throughout the country. They have also developed and experimented with low-cost strategies for providing schools with Internet linkage (including email service for their students) on a limited connection time basis. And they are engaged, as well, in continuing lobbying efforts to encourage national government officials to invest the resources required to bring the Internet to Indonesia’s vast student population.

Onno and his associates are also engaged in continuing advocacy work with national government officials to assure a more enabling environment for their efforts at expanding low-cost Internet accessibility. Early efforts to introduce that system ran afoul of government regulations requiring a license (that proved to be impossible to obtain) to broadcast on the 2.4GHz band width that the WiFi systems employ. Fortunately, however, Onno and his network colleagues joined forces with two other groups (the Internet Service Provider Association and the Internet Café Association) to lead a successful advocacy campaign to change those regulations. In early January of this year, the government liberated the 2.4GHz band width for public use with no licensing requirement.

While most of Onno’s efforts over the past decade have focused on Indonesia, his community-based work has attracted considerable attention in other settings. In December 2003, Onno played a very active role at the World Summit on the Information Society (WSIS), hosted by the United Nations and Swiss Government, where his presentations on community-based ICT (Information and Communications Technology) development attracted a wide audience. As a result, Onno has recently been invited to conduct workshops on low-cost, community-based strategies for Internet access in several other countries including Bangladesh, India, and South Africa, and he is engaged in lively email dialogue with like-minded individuals in a wide array of overseas settings.

Onno was born in Bandung, West Java, in 1962 and raised there in an intellectually stimulating family setting. His late father, Hasan Poerbo spearheaded a bottom-up community development movement in Indonesia, and instilled in Onno his strong commitment to working for the betterment of society and the empowerment of his less advantaged fellow citizens.

As a youngster, Onno enjoyed adventure, both physically through scouting activities and mountain climbing, and mentally through learning the principles of aerodynamics and short wave radios. In primary and secondary school, he displayed a growing interest in technology by building a viable model airplane and constructing his own amateur radio transmitter. In the early 1980s, when computers were still rare in Indonesia, he persuaded friends in the Institute of Technology Bandung (ITB) community to let him experiment with and explore the innards of their computers.

In the mid-1980s, Onno went on to study electrical engineering at ITB, where he received a degree with honors and organized a student club that gathered together outmoded and broken down computers, repaired them, and created a computer network. In 1987, he undertook graduate studies in electrical and computer engineering in Canada, where he completed an M.Eng. at McMaster University in 1989 and a PhD at the University of Waterloo in 1993.

When Onno returned to Indonesia upon completion of his graduate studies, he accepted a faculty appointment at ITB. There he specialized in Internet technology and, together with his students, created a campus network of computers that eventually linked up some 27 institutions of higher learning. While at ITB, he also spearheaded the creation of a database for an online library system and traveled widely across Indonesia, and on several occasions abroad, to present his ideas at seminars and workshops and stimulate the creation of a broadly inclusive network, or virtual organization, of like-minded individuals committed to democratizing access to the Internet and participation in knowledge-building endeavors.

In the late 1990s, these activities and concerns consumed a rapidly increasing share of his energies and passions, and, in 2000, he decided to abandon the “security” of the campus setting (with its guaranteed income and pension) in order to work to work full-time on transforming Indonesia into a knowledge-based—rather than primarily manual labor-based—society.