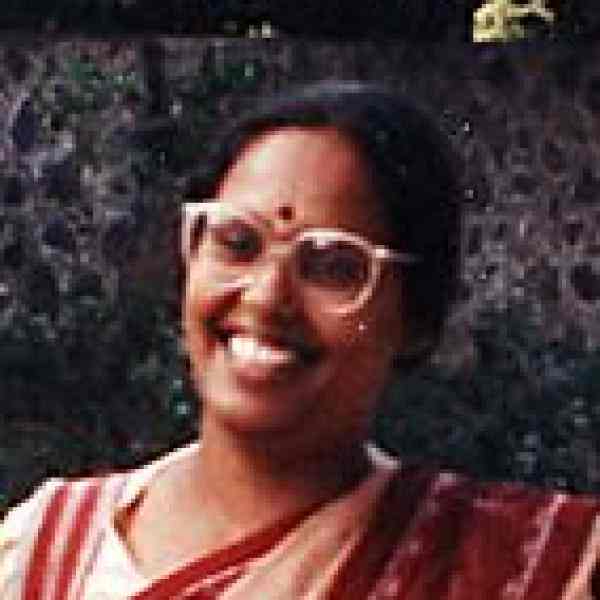 Nalini Nayak (India 1989) has, over the last two decades, played a central role in helping the small scale, traditional fisherman of Kerala&#39;s coast develop their first marketing co-ops and unions. Now she&#39;s turning her organizational skill and substantive expertise to helping all the many actors involved work out how to manage the land as well as ocean environment in order to ensure the fisheries do not continue to produce less and less.

In one fishing area after another, from the North Sea to the Indian Ocean ever more aggressive fishing is producing less, not more fish. Like most of the planet&#39;s other ecosystems, the oceans have reached the point of diminishing returns. They need to be managed in a sustainable way every bit as much as farmlands and forests.Nalini will focus on the most difficult aspect of the needed transformation, the interface between the land and the sea. Whether the rivers carry more silt, the mangrove wetlands are destroyed, the bird population changes, chemicals are dumped, or the rain absorbs pollutants from the air as it falls, these and many other land-based changes affect the fisheries very significantly. This is especially so in tropical regions such as the Keralese coast where the chief fishing areas are near the land. (In less hospitable climates the fishing is less varied and further off shore.)
Nalini will define the interventions on land that are most critical to the coastal fishery and most likely to be politically attainable. Then she will try to organize the necessary discussions, alliances, and pressures to bring them about.
To the degree she can succeed in Kerala, she will be setting important, visible precedents. If she can find ways, for example, of engaging the fishermen, the mangrove owners and users, the government and others affected together in thinking and negotiating how to preserve and most beneficially use the mangroves, this new constellation of interests and her methodology in bringing them together will be highly relevant from the Philippines to West Africa and Brazil.
Since Kerala is recognized both in India and worldwide as one of the world&#39;s most successful small scale fishing areas, innovations demonstrated here will quickly be visible. That Nalini was one of the founders and is just now retiring as the global convener of the international Supporters of Fishermen, a group that speaks for small fishermen in international debates, such as the UN&#39;s Food and Agricultural Organization, will also help ensure that word of the experiment spreads.

The age-old fishermen&#39;s trade is at a fundamental crossroads. New technologies and ever growing populations are putting such great and ill-considered pressure on the oceans that yields are declining. Yields of cod and haddock in the North Sea are plummeting and unless harvests are cut 25-50 percent to allow breeding to catch up with the fishermen&#39;s nets, they will continue to fall. The same pattern is apparent off the Keralese coast.For ten years Nalini and the fishermens&#39; groups with which she works have been pressing the state and central governments to ban trawlers in the spawning months of June through August. Her data in the hands of a popular movement slowly, gained ground. The government offered relief payments to the fishermen -- but no change in the policy. The government appointed three commissions, one after the other. Gradually the data showing declining yields became increasingly hard to explain away as a cyclical phenomenon. Nalini and the fishermen kept working with the scientists, pressing their point and their data. Finally, just recently, the government has banned the trawlers from June through August. Important in itself, this decision represents a turning point in public awareness and policy, the first major step towards managing the resource sustainably.
This is only the beginning, however. How the coastal fishery&#39;s sustaining ecosystem works is still only very partially mapped. It is enormously complex -- thousands of species mingled together in mutual dependence near to the shore and its many influences. The land-ocean interface is even less well understood ecologically, but even more limited in terms of human perceptions and interactions. What is man doing to the coastal and riverine breeding grounds where much of the off shore cornucopia is born? Which men and why? How might their incentives be changed? How can the typically largely isolated subculture of the fishermen learn how to deal effectively with these on-shore interests? What sort of institutional changes will be necessary if a coherent dialogue and then an ongoing series of trades between interests to the common good is to become possible? Who will be able to cause those changes? How?
The problem in India is especially difficult because there is little hope of finding jobs for fishermen, even educated young people, elsewhere in the economy. If their lives are to improve, the sustainable yield of the fisheries must increase. Figuring out, let alone showing how these questions can be answered will be difficult. However, these are questions that cannot much longer be put off.

Nalini proposes to attack the problem practically. She&#39;ll identify several of the most critical land/sea interfaces and try to identify feasible, relatively easily explained remedies that promise major benefits without triggering unmanageable opposition.One area of early concern for her is, for example, the prospect of high tech privatization of coastal wetlands and breeding grounds, e.g., for shrimp farms or other forms of intensive aquaculture. She would like to find ways of getting these higher yields but without cutting off either the breeding grounds for offshore species or the possibility of using modified aquaculture to help the small fisherman enhance his offshore income.
Another example gives a sense of the diversity of issues with which she is dealing: How can one encourage coastal forestry, both to control wetlands-destroying erosion and to provide lumber for the fishermen&#39;s boats? She&#39;ll start in each area with technical and ecological analysis. What alternatives might work? Then, working as she has learned to do, with all the interested groups, she&#39;ll feel her way towards a solution that might fly as well. Finally, she&#39;ll start and press a process that brings as many of the affected parties together with one another and the best data available until they edge their way towards new, mutually acceptable policies.

Nalini is one of the very few people who could conceivably bring even some of this to pass. She&#39;s a good analyst who has been working with fisheries issues for twenty years. She&#39;s a founder and highly accepted member of one of the worlds most genuine large scale organizations of small fishermen. She understands the politics from the most local to the most international levels. Moreover she&#39;s been a highly effective leader in the struggle of the 1970s and 1980s to preserve and protect both the small fishermen and the fishery.She grew up in Bangalore and got her BA there in economics. She then took the bold step of going to Kerala to work with virtually the only unorganized group in the state, the small fishermen. After two years working there (1967-69) she went to the prestigious Tata School of Social Work in Bombay for two years to master a number of tools she had by then recognized she needed.
She returned to the Keralese fishermen the next year and embarked with several friends on what turned out to be a prolonged but ultimately successful struggle to help organize a series of marketing and credit cooperatives. However, as she saw her efforts undercut first by frozen fish entering the local market and then by the declining yields caused by the trawlers, she took a year off to study the problem along India&#39;s coasts and in Sri Lanka and the Philippines.
In the 1980s she worked to help build up a registered trade union of fishermen. With self-employed membership, it is a singular union. However, it has proven effective in pressing it&#39;s members interests on government and others.
Nalini has also founded the Self-Employed Women&#39;s Association of Trivandrum, which helps women from the fishing communities find alternative jobs. She&#39;s also been at the heart of the Coastal Women&#39;s Association a mass advocacy group.
In 1984, when FAO was showing scant interest in the fate and usefulness of small, &quot;artesenal&quot; fishermen, she helped organize a counter-conference. It was also the launching ground of the International Supporters of Fishermen.