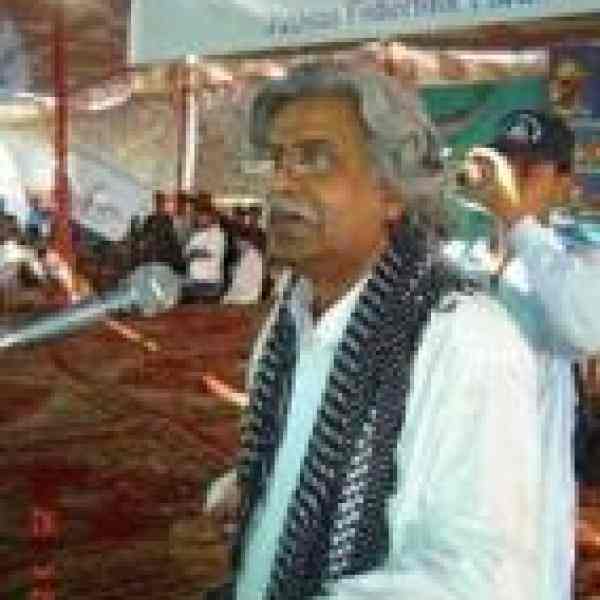 Mohammad Ali Shah has created a platform for fisherfolk, historically treated as serfs and excluded from the market, to acquire a voice in policy making and to participate as equals with other stakeholders in the fishing industry.

Shah identified the need for a large-scale movement to improve the status of fishing communities and empower their citizens. He founded the Pakistan Fisherfolk Forum (PFF), a network of fishing communities that advocates for the rights of the fisherfolk and builds the financial and social infrastructure to allow them to access employment and income benefits as Pakistan’s fishing industry expands.Shah began by creating a research cell to better understand the different needs of the fishing communities living along coastal and inland waters. He also worked with media to highlight the fisherfolk contribution to the growing fishing industry and to target the destructive government policies that were polluting and destroying their resources and livelihood. Shah simultaneously began helping the fishermen to educate their children, providing them credit to improve their fishing equipment, boats and nets and training them to better manage water resources. He also advocated for their causes in the national and international press, including for the release of fishermen arrested by authorities in India and Pakistan due to straying across the border from both sides. To address the needs of fisherfolk in a more systematic and integrated way, Shah founded the PFF to represent the collective voice of the fishing communities, and incorporate his research, advocacy and legal support to fuel a movement that could achieve broader success. Shah has since expanded the domain of the PFF from fishing communities along the coasts to those residing in the inland waters of Sindh province to fishing communities in other provinces of Pakistan.

More than 5 million fisherfolk suffer from historical discrimination. Prior to the Colonial period, they existed as low caste and marginalized communities but independent and free to earn their living from fishing, transportation and boat construction, and net making. But the British awarded ownership of large tracts of land to the nobility and built dams and canals. This converted the landless laborers and artisans into serfs, along with those living in the fishing communities, and the dams and canals fragmented the fishing communities. Along the coasts, government policies granted fishing contracts to international trawlers and supported the middlemen. As a result, the fishermen were deprived of fishing rights and marginalized as contract labor, becoming indebted to these middlemen. For the last five to six generations, the conditions of the fishing communities have deteriorated, and this has adversely affected the management of water resources. Lakes and rivers have become polluted and fish production is being replaced by fish farms. Destruction of mangroves around the coasts and drag net farming by trawlers have been especially harmful to the environment and the livelihoods of the local fisherman, who do not have the resources for deep sea fishing. With the international boundary drawn in the center of the waterway, authorities from both sides also arrest fishermen for straying.The government has not taken interest in opening educational and medical facilities along the coast. The landowners have continued to use the fishermen as forced labor, deprive them access to services and force them to work as serfs and wage labor. While middlemen have further exploited them by giving them loans at exorbitant prices, in turn for paying marginal rates for their produce and forcing them to buy supplies from their accredited stores at high prices. Subsidized loans marked for fishing communities are often usurped by the middlemen in their names and are not returned, putting the fishermen on the defaulters list. Increasingly marginalized, fishing communities have sunk to the bottom of the social and economic structure. Thus, their voice and ability to participate in development has been severely weakened. Lack of access to development, elite capture of benefits, pollution and mismanagement of water resources has led to violence, unrest, and fragmentation of fishing communities. Unable to integrate and work collectively, they have become inward looking and have turned to desperate means. The major achievement in organizing the fishing communities for Shah, in his own words, has been to bring to fore the women and through them to demonstrate to the larger communities the resilient features of the fishing culture, as well as the strong desire of the fishermen to contribute towards management of water resources and collectively regain their status in society.

The PFF was registered in 2002 as a membership organization and has more than 1,500 households as members, from the fishing communities in Sindh, Balochistan and Punjab. The organization’s mission is to improve the living conditions of the fisherfolk by increasing the fisherfolk’s capacity to improve their own livelihood. The programs are also designed to change government policies that restrain and deprive the fisherfolk of their livelihood opportunities and deny them their rights.Community development includes organizing the community, establishing education and health infrastructure and highlighting culture and gender issues. PFF networks with 80 community organizations of the fisherfolk. Media advocacy primarily focuses on the livelihood issues of fisherfolk. More recently, they have focused on the contracting system, industrial fishing (deep sea trawlers), and water management. In addition, the media advocates for the release of Pakistani and Indian fishermen in jails, and for the protection of the basic needs and rights of fisherfolk—including education, health and drinking water. PFF’s research and development into water rights of the fisherfolk focuses on the diminishing fresh water resources in the Indus delta region and the pollution in inland water reservoirs. Linkage building or networking between fishing communities in Pakistan, internationally and with donors and supporters is key to keeping the PFF going as a strong social movement. The PFF was launched by organizing the first Fisheries Day in 1999. The event is celebrated annually to recreate the bonds between various fishing communities at national level and to strengthen relationships with international organizations, especially organizations of fishermen. Shah views the international relationships as an ‘insurance’ against oppression.Since 2000, PFF has engaged in supporting the struggle of fishing communities in Badin against the Rangers. The Rangers had taken control of the waters and issued contracts for fishing to outsiders thus depriving the local fishing communities of fishing rights. PFF’s multiple program strategies (community mobilization, media advocacy, research and development and networking) were successful in getting back their livelihood rights to fishing, the use of the fish products, and marketing and selling. This improvement for approximately 50,000 fisherfolk has set a precedent and the PFF is expecting the judiciary to give a decision in its favor for the fishing rights in inland waters. In addition, Shah believes that putting women in charge is the major reason for success. Demonstrations using cultural themes, including song and dance, attracted the media and public sympathy towards the cause and highlighted the peaceful aspects of the struggle. The government could not react violently to these demonstrations and were positively pressured to respond to the demands of the fisherfolk. The demonstrations have also improved the gender balance as men have realized the contributions and strength of women.Shah now focuses on bringing about policy changes—doing away with the contract system in the inland waters; restricting the industrial fishing to deep sea; restricting arrests of fishermen by creation of a buffer zone along the international boundary; improving water resource management and conservation of lakes and inland water reservoirs; increasing the flow of fresh water in the delta region; and improving social services in the coastal areas and in settlements of the fishermen. He has built a team of 75 people and has national and international volunteers supporting his work. He has also started to mobilize communities in Punjab and North Western Frontier Province (NWFP). Once the judicial ruling comes back in favor of the fisherfolk, PFF will push for the abolition of the contract system in Punjab and NWFP through the courts.Shah has also started to link the fisherfolk programs with those of landless agricultural laborers and artisans. A loose network of citizen organizations working on the issues has been formed and PFF is supporting them in research and development and training them in peaceful media advocacy. Shah sees this network as key to bringing about pro-poor agricultural policies in Pakistan that could set a precedent for other nations around the world.

Shah was born into a fishing family in Karachi. As a child he was enrolled in a religious school but ran away several times and his parents had to admit him to a local community school. Shah worked hard to pay for his own education and graduated in Economics from Karachi University in 1986. During his college days, he became involved in student and nationalist politics but was frustrated with the negative approach of political leaders. In 1983, he established a community organization in his village to carry out social development work. Shah sought to develop health and education services in Ibrahim Hyderi and to train and organize the women and youth through participation in cultural activities. He built drama and theater groups to inform the other fishing communities and create interaction. In the process, he recognized that someone needed to challenge government policies that were taking away the rights of fisherfolk in favor of private contractors and international fishing companies. During the 1990s, Shah attended numerous international meetings and saw the fishing associations in these countries working for the betterment of the fishing communities. His participation in the Fish Harvesters and Fish Workers conference in Delhi in 1997 opened his eyes to various strategies. After, he held a one day workshop with the activists of various fishing communities in Sindh. This resulted in the formation of PFF.