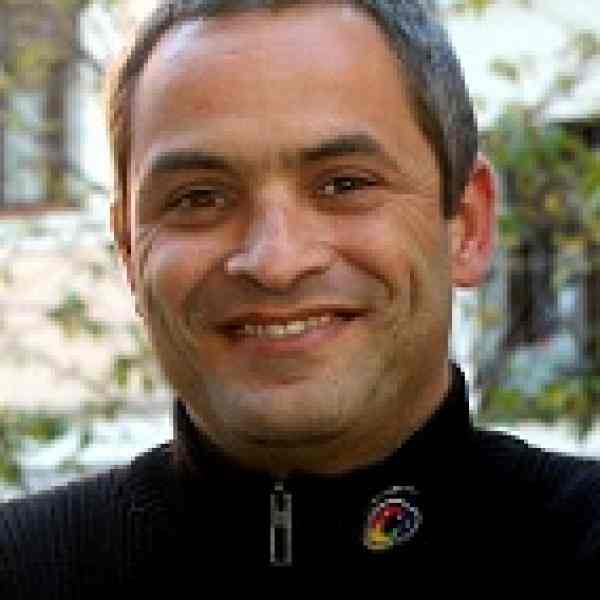 Miguel Neiva is transforming visual communication through a simple, universal and inclusive code that represents colors. Through ColorADD, Miguel is building a world where the social inclusion of color blind people becomes the norm.

Miguel has created a new code that enables communication between all people, regardless of their color vision status. Based on the cognitive process of color assimilation, Miguel’s code transcends current solutions that are too narrowly tailored to specific situations or are very expensive (i.e. corrective lenses). ColorADD can be widely adopted and applied. It overcomes discrimination, builds awareness, and offers a specific tool that develops empathy around a long neglected condition.

More than 90 percent of today’s communication relies on visual and graphic aids, yet 10 percent of males and, 5 percent of women cannot distinguish between colors. Miguel has created a code for color blindness designed with multiple applications—from transportation maps in subways or airports, process-related information in hospitals, and even commercial solutions in the fashion or clothing industries. As an augmentative tool, the code substitutes the role of color in communication by assigning simple symbols to primary colors (blue, red, yellow, black, and white) and creating basic rules to represent the different combinations of non-primary colors. Given that color blind perceive the different shades of a given color (similar to a grey scale), the code provides a simple indication of what colors they see. This universal and inclusive language is comparable to braille or sign language, but for the color blind.

Guided by the motto “Colors for All,” ColorADD combines the efficiency of a simple, attractive and scalable method for raising awareness around color blindness with a dynamic process of implementation that assimilates the users’ inputs and needs. To guarantee an effective adoption of the code and allow it to become a mainstream language, the implementation of the code has been developed and piloted with different methodologies and tailored to different industry or sector standards.

Technology has mainstreamed design, printing, and LED screen based operations or communication, multiplying the use of colors in a way that deviates greatly from the historic norm of black and white coloring. Despite our dependence on color, color blindness is the most common genetic defect in human beings according to Jay Neitz from Washington University. Not only is color blindness an issue of access, but it is also an issue of diagnostics and inclusion: 37 percent of color blind people do not know what type of color blindness they have.

Color blindness was first diagnosed and documented in 1794, but there is still no cure. Despite current awareness about this disability, made evident by the Inter-American Convention on the Elimination of All Forms of Discrimination Against Persons with Disabilities that explicitly recognizes the rights of color blind people, color blindness still remains an invisible condition. Its implications on daily life are underestimated and diminished as factor of social exclusion. Reading and understanding graphics is key for long-term success in both professional and academic settings. For example, children are often bullied in school for painting “weirdly,” defying social norms. Adults are concerned about their social acceptance, often insecure about their inadequate choice of color-palette when dressing, for example. Exclusion is more evident when color blind people are not allowed to drive (e.g. 9 million people in Brasil), or to develop certain careers for security reasons (e.g. pilots and firemen).

A study conducted by Miguel amongst color blind reveals that 64 percent consider their color confusion to be their biggest problem. 42 percent feel it is hard to fully integrate socially. To bridge these communication gaps, different solutions and conventions have been developed, especially when security is at risk. Redundant coding is becoming the norm for streetlights, transportation orientation signs, and maps. Other solutions include simulators that convert full color versions (printed or in screen) to a number of color blind friendly versions depending on the kind and level of color blindness. More sophisticated solutions with very limited availability and affordability include glasses or contact lenses that attempt to correct how colors are perceived on a one-on-one basis, depending on the specific type of disability. In situations in which coding solutions are not possible, individuals must develop their own strategies to cope. For instance, some learn by heart certain combinations of colors, use specific software to convert files into color blind friendly versions, or most commonly, ask for help. Miguel’s research indicates that 90 percent of color blind people ask for help when shopping for clothing.

Miguel combines a wide range of disciplines including design, semiotics and marketing into his strategy for creating a Color for All world. He has validated it with the scientific community in a number of conferences and journals before actually testing it on the ground, implementing different applications in critical sectors to reach the size and volume needed to make it a universally recognized language and to include it as a regular color vocabulary of people. The code and the implementation strategy has always followed an “always improve, never correct the code” approach.

Aware of the endless applications of the code, Miguel is currently piloting his tool in four major sectors. Strategically chosen for impact and awareness building potential, Miguel does not only test the code in these diverse scenarios, but he is also testing different roll-out methodologies in order to better adapt and systematize the implementation procedures for the expansion phase.

First, Miguel works with education material, including educational games and materials, to naturally integrate these symbols into children’s everyday lives, involving teachers and parents in the process. Miguel is currently developing a foundation that will focus specifically on bringing the code to the education sector, working directly with the Portuguese Ministry of Education. Starting with primary schools where the code is used to learn the names of colors, he will also focus on building educational materials with teachers while working with families and educational environments to promote an inclusive and empathetic environment for the color blind. This also helps to prevent further conflicts in school, such as bullying.

In addition to his work in the education field, Miguel also has pilots in three different hospitals (Sant Joao, Centro Hospital de Lisboa, and Hospital dos Capuchos). Miguel is introducing his code in healthcare systems through new orientation signals as well as drug and pharmaceutical labels that are usually color coded to guide procedures. Poor reading of color in the health field can cause errors that have severe consequences on human lives. In addition to health, Miguel is working in the transportation field with an immediate application in maps, including subway, bus lines and in airports (i.e. Metro do Porto). Lastly, Miguel works in the retail space as well, with pilots in several industries including clothing identification (e.g. the famous Portuguese children’s brand called Zippy), orientation signals in shops, and dye catalogs as well. To prototype these applications, Miguel has targeted strategic partners that pioneer the innovation in their sectors. These partners help him test the implementation methodology, reach a critical mass, and mainstream the code. For example, Zippy, a famous children’s clothes brand in Portugal, has paid for a feasibility study that now allows for the replication of the code across the entire clothing industry.

In order not to safeguard the social impact of the code, Miguel has a very strict set of requirements to partner with any type of public or private player. These include an inclusive implementation of the code, clear commitment to devote communication efforts and resources to raise awareness around it and a consistent alignment with the organization’s vision and mission on social responsibility. Under no circumstances does Miguel engage in any partnership that requires exclusivity of the code to that particular player in a given sector.

In order to make the code affordable and available, Miguel is developing a licensing model. The cost will be scaled depending on the type of application as well as on the type of business or organization implementing the code. The licensing model will either be annual or lifelong, depending on the users’ needs. There will also be a no or low-cost fee for non-profits. In addition he sells consultancy for the implementation processes that in parallel allows him to replicate the model, for free, in similar non-profit realities. There are already 24 projects implemented in Portugal and one in Spain.

There are also citizen organizations (COs) and schools with smaller scale applications of ColorADD in China, France, Holland, Germany, Thailand, Iran, Brazil, and Argentina. In Portugal, these partnerships are also helping to test the code in different geographic and cultural contexts. Miguel has been invited by the Portuguese government to design a national law for the implementation of the code. In Portugal alone, ColorADD already reaches a potential of 3.5 million people per year in the Metro do Porto and 15,000 people a day at the Hospital of St. John Port. Internationally ColorADD has engaged millions of individuals and institutions. ColorADD also has over 500.000 references on the Internet, more than 200,000 visits to his website, over 6,000 followers on Facebook and blogs with thousands of views.

Future plans for expansion include strengthening the adoption of the code internationally. Miguel is working closely with Portuguese companies with heavy export potential such as CIN, Delta, or Unicer. He is currently targeting widely renowned international opportunities and organizations that will give the code the visibility it needs to spread. For instance, the code will be used in the Olympic Games in Rio 2016, thanks to the Portuguese Olympic committee request. There is also a pilot already in place for the International Games of the Portuguese Speaking Countries Community and in the Portuguese National Sports Museum.

When Miguel was 10 years old, he experienced vulnerability and suffering when he was deprived of any human contact due to hospitalization for hepatitis. At 16, when hospitalized again for a motorbike accident, he experienced the same feeling of isolation. When he decided to go to university, he wanted to do something that fulfilled his passions but also would be useful for people in dependency or exclusion situations. Energized by the role of design in generating social impact, he became the only one from his close network to enroll in the first Design course in Oporto. This was one of the first courses of this nature to exist in Portugal and he persevered, despite the fact that all his family and friends did not understand his decision.

During Miguel’s youth he was involved in several radio, theatre, sports, music, and cinema projects. He eventually found his way as a designer. As a first year college student, he founded the Association of Multimedia Production—CINÓNIMO, and a design and printing company, ÍCONE Concept Design. Miguel developed a hybrid and informal way of capacity building for COs. Key to the strategy was incorporating improved design as a tool for building the organizations’ social impact.

Twelve years ago, during Miguel’s completion of his master’s thesis, he had the idea of creating a universal color code. Immediately after this idea, he imagined back to when he was six years old. His color blind friend suffered from bullying and exclusion in school. This prompted him to research color blindness in depth, while also jumping into developing the code and the prototypes. Miguel was later inspired to build a foundation for education in primary schools in Portugal and Brasil, only two and a half years after launching ColorADD.

For several years, Miguel was also the President of the Portuguese Design Association with the mandate of having design at the service of community well-being.

While in this association, Miguel developed We Need Design with the ESMP, Brasil. Its goal was to promote social development projects for communities low on the human development index, and events within the ESPM to spread standards of sustainability.