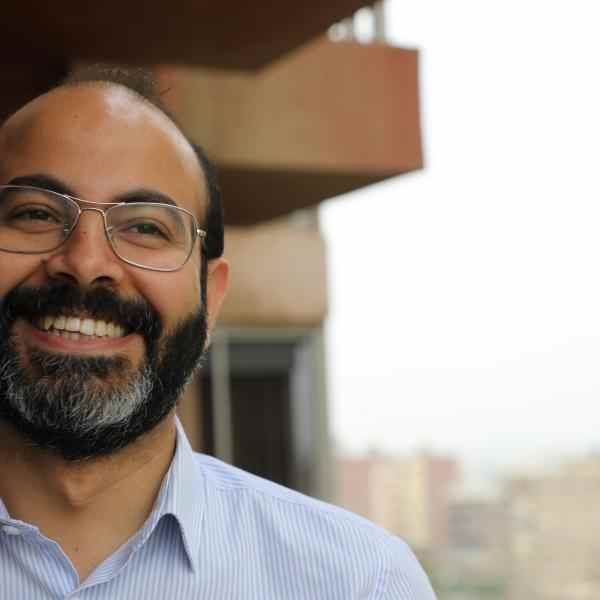 Through a comprehensive system that successfully brings together parents, teachers, social workers and psychologists, Michael is instilling and promoting resilience in high-risk, underserved children to recover from or positively adapt to adverse circumstances.

By instilling and promoting resilience in children from a young age, Michael is affording high-risk, underserved communities the essential tools to recover from or positively adapt to change manifested in adverse experiences. He is building protections into child development at multiple levels by focusing on all the adults in a child’s life: parents, teachers, social workers and psychologists. Michael’s solution transcends conventional approaches of solely focusing on the child to integrating all parties in a child’s life in one setting. Furthermore, he is not only spreading effective preventive and protective interventions, but also educating and enabling the community to identify and support disadvantaged children suffering from mental health issues.

According to the Central Agency for Public Mobilization and Statistics CAPMAS, the child population between 0 and 17 years of age in Egypt represents 37.1% of the total population (~ 33.4 million people), one in ten of which will experience poor mental health. These numbers are justified by the findings of the 2014 Egyptian Demographic and Health Surveys (DHS) conducted by the Ministry of Health and Population, where it is stated that 93% of children in Egypt have been subject to some form of violent disciplinary practice by parents or caregivers, often in combination with non-violent discipline, while 78% experienced physical punishment. Severe physical punishment is also significantly more widespread in rural areas than in urban settings.

Though 57% of the population resides in rural areas, due to a heavily centralized economy, there is a severely disproportionate supply of mental healthcare facilities/services between urban and rural areas. As for awareness campaigns and preventive strategies/services, these are deficient across Egypt, except for a few expensive services targeting the urban elite. However, even services targeting the elite are merely “one size fits all” solutions copied and pasted from countries and cultures that do not have the same needs. One of many hot topics vis-à-vis mental health in rural areas is the widespread notions that mental illness reflects parents’ inability to “straighten out” their kids’ behavior and delayed speech is a “punishment from God”

The gap is further deepened by the lack of awareness, and stigma surrounding mental health especially in less educated, rural settings. Children with mental deficiencies are generally isolated, harassed, or often obliged by their parents not to go to school. This is a recurrent case in poor rural areas, where children with the slightest developmental or mental issue are kept at home so their “normally functioning” siblings could go instead. This being said, schools are definitely not inclusive, widening the gap between students who resort to bullying and harassment, when a colleague responds or acts differently. Families do not usually send their children to psychiatrists either out of fear of being stigmatized in their community, or because they lack the minimal awareness of the impact of the negligence of such issues. In Egypt, pediatricians report being frequently consulted only when children start showing behavioral problems. Unaware of how to deal with the situation, a considerable number of parents resort to pediatricians or even local healers before, if ever, visiting a psychiatrist/psychologist.

Parents’ lack of awareness, or rather unawareness, is coupled with insufficient to no training of social workers, general practitioners, and teachers in schools. In fact, although more than 95% of primary and secondary schools have either a part-time or fulltime health professional, not more than 2% of these professionals have gone through adequate mental health training.

Though Egypt signed and ratified the United Nations Convention on child rights in 1990, which declares that each child has the right to mental health care services, as is necessary for their wellbeing and opportunities for care at the highest attainable standard, mental health in general, and child mental health in particular are not on the Egyptian government’s healthcare agenda evident in the reasons previously underlined.

Successfully piloted at Al Abbaseya Mental Health Hospital- Egypt’s oldest Psychiatric hospital-in 2014, Hope is a dynamic and adaptive resilience program built over a series of drafts and communications with stakeholders to effectively tailor individual interventions in academic precision. Michael’s choice of directly working with those surrounding the child. By incorporating all the adults in a child’s life in one setting (public school premises), (i) Michael not only promotes resilience in children (ages 5-14) to stop preventable mental health issues from developing, but also affords affected parties the necessary tools to adequately deal with children, lest they experience issues. Since underserved, rural communities are the most negatively impacted, and least served, (ii) Michael started by introducing Hope to disadvantaged public schools in rural areas.

To debunk the stigma surrounding mental health, (iii) Michael directly targets parents and teachers to provide the required tools taking customs, taboos and culture into consideration. With a high illiteracy rate (of 20%) and even higher mental health illiteracy rate, parents from underserved communities require suitable support to ensure a secure and healthy home for their children to flourish. Though the program was initially designed to promote children’s resilience, the benefit is bi-directional, because teaching parents how to build resilience in their kids ultimately flows into them, making them more resilient. He also enables teachers to treat and support children in the most efficient and effective way by improving their pedagogical methods.

In addition, to account for the lack of trained mental healthcare professionals, (iv) Michael has also integrated a rigorous program to build the capacities of social workers, psychologists, and general practitioners.

Delving deeper into the program comprised of three phases; the first includes all three groups- parents, teachers, social workers/psychologists- and trains participants to identify the difference between challenging behaviors/emotions that are consistent with typical child development, and those that are cause for concern. The second phase also includes all three groups and analyzes the interaction between home and school, and any friction caused by miscommunication or lack thereof between both worlds. Positive relationships within children’s natural habitat- schools and homes- inevitably act as a buffer against negative experiences that play a dominant role in the prevalence of children’s mental health issues. The third and last phase is respectively tailored for each group. Teachers are taught to detect when a child should be referred to the school psychologist/social worker, are offered powerful positive reinforcement tools, in addition to the means to set a safe and interesting learning environment. Social workers and psychologists, on the other hand, are up-skilled to identify and adequately assist students in general, and those suffering from mental health issues in particular. As for parents, they are thoroughly coached on positive parenting and the impact they have on their children. Successively, teachers and social workers/psychologists re-convene to utilize the acquired knowledge and construct tailored management plans addressing collectively identified problems. Applying the skills he learnt during his PhD, Michael peer-reviewed Hope’s holistic program and designed very rigorous impact indicators to measure his achievements.

According, to pre- and post-impact evaluations at one of the schools Hope was introduced to, violence at the school decreased by 33% following Michael’s intervention.

Hitherto, Michael has worked inside public schools to encourage both school administrations and targeted officials, in addition to parents, to participate in the programs. In three years, Michael has empowered 3000 people to set healthy living and learning environments for students across 8 governorates in Egypt. Governorates include but are not limited to Luxor, Aswan, Sohag, Alexandria, El Minya and Asyut. This way, he is decentralizing access to sound information, and subsequent practices, on youth mental health.

To further reduce the stigma around mental health issues, and increase the capacities of more families and teachers to support their children, Michael is currently in the process of partnering with Masr El Ataa (Egypt Gives), an initiative under the Egyptian General Medical Syndicate, which can bring more manpower, financial assistance and doctors on board, and increase access to treatment. Through this partnership, Michael aims to build his credibility and reputation, which would then allow him to integrate his curriculum as part of the Egyptian public schooling curriculum. Additionally, Michael is creating a Resource Bank compiling his teaching materials (a White Book) to enable people to autonomously replicate the model across the Arab World, while adapting it to their targeted environments.

As a child, Michael was an avid puppeteer. As his talent manifested, he went beyond just operating puppets to diving deeper into stage décor, puppetry techniques, the diverse puppet materials and how to optimize their usage, and finally writing scripts himself. What started out as a simple means to entertain people evolved into a noble message that Michael wanted to convey to his audience. In what seemed like a watershed moment to Michael years after, theatre showed him that although the person manipulating puppets is the focal point- the main tools-, the marionettes, stage lighting, script, and production are indispensable guarantees of the show’s success. As a med school student at Egypt’s prominent Ain Shams university, Michael wondered why people, who could be their own heroes and lead their own “lives’ shows”, were actually a cornerstone of the problem, and not part of the solution. This later spurred Michael to holistically work on all components of a child’s environment, the absence of which would inevitably negatively impact the system’s focal point- the child.

A child psychiatrist and Ph.D. student, Michael always showed immense interest in the field of mental disorders, especially the plight of children suffering from them and forced to fight on two fronts: illness, on one hand, and marginalization as a result of societal stigmatization, and ensuing maltreatment, on the other.

During sophomore year, Michael was frustrated about students’ disengagement in their communities, deciding to lead by example, and joined a campaign against polio, which had been an endemic in Egypt for over 3000 years, to promote students’ advocacy and action. He led one of the teams of this campaign in one of Egypt’s most densely populated neighborhoods-Nasr City- knocking on every door to vaccinate every child in the district of 1 million inhabitants.

His experiences with NGOs and as a student heavily exposed Michael to human rights advocacy, motivating him to combine his new passion for human rights with his interest in psychiatry through his postgraduate studies at the Indian Law College, where he integrated international human rights concepts into his practice, and worked on identifying whether national laws are consistent with international human rights and best practices, with a special focus on the Egyptian context. In his thesis on the quality of life in mental health institutions in Egypt published on the World Health Organization (WHO) website, Michael profoundly exposed the shortcomings of these institutions.

As an Egyptian psychiatrist and human rights advocate, Michael realized the general tendency, embedded in the Egyptian culture, for one to fear the unknown, further augmented by the poor educational system, as well as the economic and political instability, especially after 2011. That year, Michael, with colleagues, decided to initiate “The Land of Freedom” encompassing different cultural activities (book and movie clubs, musical evenings, etc.) inside Al Abbaseya Mental Health Hospital, with a double bottom line: to facilitate interactions between different factions of society- interactions otherwise implausible given the surrounding stigma- and to dissipate the “castle of the crazy” stigma about the hospital. After the success of “The Land of Freedom”, a similar initiative was later launched in the Egyptian Medical Syndicate under a different name “Dar El Hekma” (House of Wisdom) with the purpose of further nurturing social-emotional learning that can be expedited in a participant-led setting through different activities.

As a natural evolution of his vocation, Michael founded Hope in 2014 to formally focus on what he is most passionate about: children’s mental health problems. Though he started in the most deprived areas, Michael’s solution addresses a dire, national need, and will be expanding on a national level.