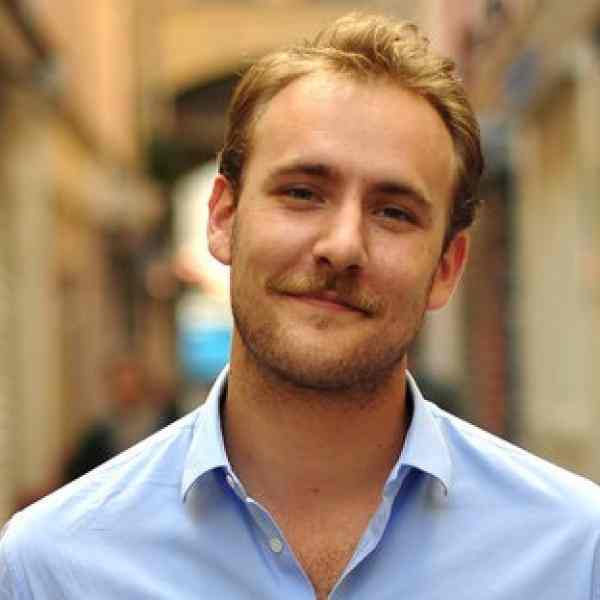 Louis-Xavier fights against social exclusion by building a solidarity network between small business owners, neighbors and homeless people that recreates social ties at a micro level. Through this new framework, Louis-Xavier manages to embed social inclusion into the citizen’s everyday life while giving to the homeless the opportunity to take on an active role in their own social reintegration. With already hundreds of active citizens involved, Louis-Xavier heads towards a society in which fighting against exclusion is a fully shared concern.

Louis-Xavier pioneers a new model in order to embed the fight against social exclusion into the citizen’s everyday life. To do so, he builds a solidarity network between small business owners, neighbors and homeless people that recreates strong social ties at a micro level.

Louis-Xavier realized that small local business owners can easily provide simple services that improve the living conditions of homeless people, for example, access to restrooms, a phone call, or a glass of water. In this way, small business owners represent key players to be engaged in the fight against solitude and rejection. Louis-Xavier began by identifying the small businesses willing to open their doors to offer what they can to the homeless, and establishing a method for labeling them. Following this, Louis-Xavier asked them to take on a cornerstone role in local social inclusion by building around them a wider local community that involves both local residents and homeless people to help with the coordination and development of such a network.

In this manner, Louis-Xavier’s network not only provides the missing framework for the local business owners and neighbors to be essential stakeholders in social inclusion, but also gives the opportunity to homeless people to be active contributors of the community and thus realize that they have their own social value: a necessary first step towards a fuller reintegration in the society. Through the role of ‘neighborhood ambassadors’, homeless people can indeed recruit additional business owners in the network, the organization of events gathering the community or in communication towards other homeless people about the availability of the service and the possibility for them to engage. Thus, challenging homeless people’s position as ‘only’ beneficiaries in typical power dynamics, Louis-Xavier provokes a significant mindset shift both in the residents’ thinking about the reality of homelessness and in the way homeless people see themselves.

In order to reach broader social impact, Louis-Xavier adopts a two-fold strategy that consists of replicating his network in other districts and cities, while capitalizing on his existing network to diversify his actions. Louis-Xavier is designing different toolkits to empower local organizations or public authorities to implement his solution locally – in France, and around the world. At the same time, Louis-Xavier mobilizes the community he has already built to go one step further in the homeless’ social and economic inclusion. Eager to trigger a global mindset change, Louis-Xavier works closely with both the main historical social work organizations and public authorities to set up the citizen daily engagement in social inclusion as a new standard, and turn homeless people into active contributors of their own reintegration into the society.

In France, 3,5 million people are ill-housed, and the number of homeless people has doubled within the last ten years. And while the third more important concern for the homeless is their self-image, 83% of them express they feel rejected.

Today, helping the homeless is a “professionalized” action, mainly operated by volunteers of big Social Work Organizations: even if crossing the path of the homeless is part of one’s daily life, citizens - even if they feel concerned - usually feel resourceless to help the homeless. They don’t dare anything except giving a bit of money to beggars from time to time. As a result, there is a deep social disconnection between the homeless and the numerous people who cross their path every day, leading to fear, stereotypes and social exclusion, which exacerbates precariousness.

In addition, the homeless are often confined in the passive and dependent posture of “beneficiaries” that the classical forms of social aid (social patrols, food distribution, etc.) may contribute to install; being hardly able to envision how to actively help themselves impacts the homeless’ capacity to see their own social value and thus, contributes to erode their self-esteem and confidence. This once again widens the gap between the homeless and the rest of the society.

In growing cities where anonymization have become the norm, the challenge is now to invent the missing framework that will allow both homeless people and other citizens to recreate strong social ties and thus collectively fight against social exclusion in their everyday life in an easy, respectful and informed way.

To embed local solidarity in one’s everyday life, Louis-Xavier created a solidarity local network, Le Carillon, in which all neighbors of a district - whereas they are homeless or not - contribute to reinforce social ties by exchanging simple services that change lives.

To build such a solidarity community, Louis-Xavier leans on small local business owners (restaurants, hairdressers, opticians, etc.) who are able to easily provide during the day simple services that improve living conditions of homeless people, such as access to restrooms, a phone call or a glass of water. Starting in the neighborhood where he grew up in Paris, Louis-Xavier created a label to identify the small businesses willing to open their doors to offer what they can to the homeless. Thanks to easy-to-understand pictograms, which allow to overcome language barriers, small business owners indicate on their shop window what kind of services they can offer, and at what time. Enabling the business owners to customize services and time is key to engage them and ensure homeless people are effectively welcome. Such a system helps every business owner to easily engage in the fight against social inclusion; it also reverses a well-anchored typical tendency in which the homeless are not the ones going towards the “mainstream society” out of fear of being rejected.

On the other hand, Louis-Xavier works hand in hand with social work organizations, such as local unities of the Red Cross, Les Restos du Coeur or Emmaüs, and other social structures to reach the homeless with information about Le Carillon, how it works and the location of small businesses that are part of the network.

Once this first step is completed, Louis-Xavier builds around these small local business owners a wider community involving local residents to help with the management and development of this inclusive network. The network’s management includes the organization of monthly events where residents and homeless people meet and spend time together in one of the labeled local shop without making any distinction between “helpers” and “helped people”. Local residents have different opportunities to engage: they can either volunteer to locally operate the follow-up of the different labeled small businesses and organize events, or take up “consumer challenges” by consuming in the labeled small local businesses to obtain consumer coupons they can offer to the homeless people they meet.

In addition, Louis-Xavier made sure to offer the homeless the opportunity to take up on an active role to maintain and develop the community. As “neighborhood ambassadors”, they can be involved in communication towards other homeless people or endorse the role of mystery customers to test the recently labeled small business owners and make sure they are not interested in the label only to spin a good line with usual customers; they can also be active contributors of a new type of local events gathering the local community, such as soup kitchens in which they are the ones serving food to their neighbors. More importantly, Louis-Xavier encourages the homeless to take responsibilities along with other citizens in the local steering committees that pilot the network’s units (follow-up, organization of monthly events, etc.).

By embedding the social inclusion matter in the citizen’s everyday life, and giving the opportunity to the homeless to be an active contributor in the community, Le Carillon’s model provokes a significant mindset shift both in the citizens’ thinking about their role of changemakers, as well as in the way homeless people see themselves.

Today, Le Carillon counts in Paris 10 local coordinated units that engage 310 business owners and 720+ neighbors. It geographically reaches thirteen out of the twenty Parisian administrative districts. To reach broader social impact, Louis-Xavier’s strategy is two-fold. First, he imagines different toolkits to empower local organizations or local public authorities to implement the model in more places in France and around the world. The deployment already started in Nantes and Lille with local trained coordinators, and is planned in other major French cities (Lyon, Marseille). As for abroad, a local NGO started to implement the model in Seattle and deployment is envisioned by other organizations (supported by Le Carillon’s team) in major cities of 7 other countries. Second, considering that breaking loneliness and increasing self-esteem and confidence is the first step of a longer pathway of rehabilitation, Louis-Xavier capitalizes on the community he built to support and participate in new projects going a step further in the homeless’ social and economic inclusion. For instance, he is developing a small inclusive company in which homeless people produce, sell and deliver biscuits to the business owners of the network, and is imagining a shared concierge service provided by the homeless to the business owners. These projects, while leading towards a fuller rehabilitation for the homeless, also contribute to financially sustain Le Carillon’s model. Other sources of revenues currently come from membership fees and micro-donations made through the payment terminals of business owners; Louis-Xavier is also structuring different offers for companies and schools to sustain his activity over the long-term, while reaching broader audiences to break stereotypes around homelessness.

The son of a socially engaged father who used to stop to converse with homeless people, Louis-Xavier was born and raised in Paris. While growing up, Louis-Xavier became increasingly sensitive to the conditions and barriers that homeless people face, after witnessing a family member battle mental health issues - a contributing factor for many individuals who are vulnerable to becoming homeless.

After studying economics and social development at the University Paris Dauphine, and Paris 1 Panthéon-Sorbonne (IEDES), Louis-Xavier started to work in Senegal for a well-known social finance NGO. Increasingly questioning his legitimacy to act abroad, and shocked by the death of a homeless man he used to know just down the NGO headquarters in Paris, Louis-Xavier finally decided to return in France - convinced that he would have a greater impact “down the road” in his community rather than far away from his home.

In order to increase his knowledge of the social economy ecosystem in France, Louis-Xavier joined the “Social Business/Enterprises and Poverty” Chair in the leading business school HEC Paris. This led him to make a triggering encounter with the Ashoka Fellow Charles-Edouard Vincent who charged him with the development of his new project Lulu dans ma Rue. Developing this human project that facilitates service exchanges between neighbors confirmed Louis-Xavier’s intention to create local solutions to impact the issue he was particularly attached to: social exclusion.

Thus, in parallel, Louis-Xavier spent his free time to develop what will become Le Carillon. Notably, he engaged as a volunteer in social patrols who meet and help the homeless: this conscientious ground work, by allowing him to deepen his knowledge of the reality of homelessness while gaining legitimacy and trust of the main stakeholders already present on the field, has been absolutely key in the success of Le Carillon. For Louis-Xavier, it made sense to start implementing his model in the district where he grew up, turning reality his will to make every citizen able to have an impact “down the road” in his everyday life.

Today, Le Carillon’s successful model received enough media exposure so that several entrepreneurs or NGOs, in France and around the world, reached out to Louis-Xavier and his team to express their will to implement it locally; the methodology has already been successfully replicated by a Seattle-based NGO (Be-Seattle) while spreading fast across France.