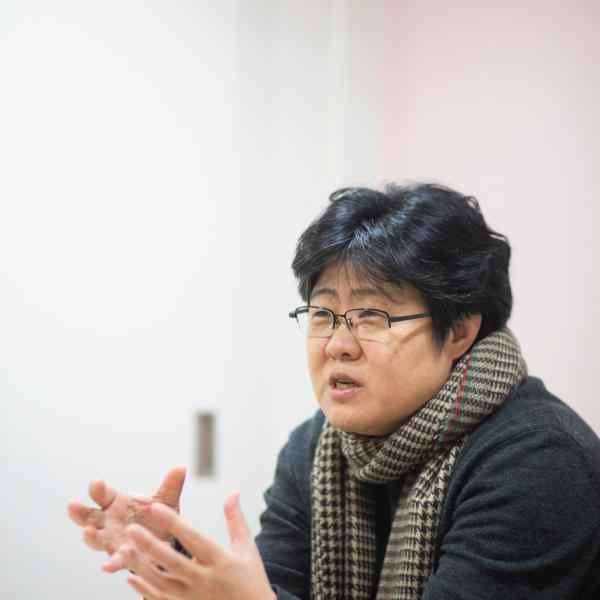 Jin-kyeong Cho is changing the justice and support systems for exploited underage girls from one that punishes minors for seemingly voluntary participation in prostitution, to one that protects the minors from offenders. Key to redesigning the systems using this “protect, don’t punish” principle is changing the relevant laws that deem underage girls as participants in crime and redefining them as victims of sexual exploitation. She is building a wide-ranging coalition of civic groups to push for such legal change.

Jin-kyeong does not stop at changing the law to publicly acknowledge the existence of underage victims of sexual exploitation. A successful statutory change would further expose the lack of support for the victims and the need for prevention efforts. To address this, Jin-kyeong and her organization are building a holistic system that prevents and supports underage victims of sexual exploitation. They proactively identify potential victims for early, preventive intervention, especially in the digital space where underage girls are increasingly and easily exposed to sexual abuse. They also provide underage victims with legal, medical, and psychological support for recovery, and assist the victims with housing, education, and employment needs so they can live independently.

Jin-kyeong understands that lasting systemic change also requires changing public mindsets. Sexual exploitation of underage girls is a rapidly growing, prevalent societal issue. Yet much of Korean society shy away from addressing it publicly and consider it a personal failure of the victims. In order to help the public confront the reality, she is collaborating with media groups for creative storytelling and investigation, especially targeting civic-minded millennials.

South Korea's sex trade is the 6th largest in the world, estimated to be around 30-37 trillion Korean Won (approximately $26-33 billion, Havocscope, 2015). Sexual exploitation of children and adolescents makes up a considerable portion of that figure. Even considering the underreporting of underage sexual exploitation due to a lack of enforcement efforts and social stigma against the victims, 18% of girls who run away from their homes are reported to be sexually exploited(Korean Women's Institute, 2015). Furthermore, as smartphones became more prevalent, children and adolescents native to the digital environment are easily being exposed to sex trade through their devices, lowering the average age of sexual exploitation victims.

However, the current Korean legal system considers underage victims of sexual exploitation to be criminals. The Act on the Protection of Adolescents from Sexual Abuse, enacted in 2000 and revised in 2009 as the Act on the Protection of Children and Juveniles against Sex Offenses (“the Act"), allows the investigative body to determine whether an underage person willingly participated in a sexual act in exchange for money or other favors. When deemed so, the minor is not considered a victim and is brought before a juvenile court for a possible criminal charge and protective custody for prostitution.

Once in the juvenile court system, underage victims of sexual exploitation are not eligible for public defenders, restitution, or other support services. Such treatment of victims discourage the authorities from punishing the offenders and the victims from reporting exploitation. Between 2015 and 2017, the number of arrests rose from approximately 700 to over 1,000, yet only 10% of those were charged with an actual crime(the National Police Agency, 2018). Emboldened offenders often blackmail victims into a vicious cycle of sexual exploitation.

There is currently no specialized training for police officers, attorneys, prosecutors, judges, or other relevant professionals in the criminal justice system who work with underage victims. This often leads to secondary trauma in the investigation and judiciary process. A survey by the National Human Rights Commission of Korea even revealed incidents where law enforcement officers sexually assaulted underage victims under the pretext of a crackdown.


Furthermore, digital technology has opened up new avenues for sexual exploitation. According to a 2018 study by the National Police Agency, over 95% of the sexual exploitation of minors takes place online, via chatting apps that enable anonymity. The authorities do not have effective ways to track down or punish sexual exploitation facilitated by mobile apps and ‘digital pimps.’ And Korean law does not have a statute to punish ‘online grooming’ - adults befriending minors in the digital space with an intent of establishing a sexual relationship.

However, 10 Up is still a sole organization dealing with sexual exploitation towards minors. Furthermore, conservative officials working for government body such as the Ministry of Justice fail to understand the reality and severity of the problem, insisting the change of the law, defining minors as victims, will make minors actively sell their sex. This lack of understanding and awareness is slowing down the process of positive change.

Jin-kyeong works to fundamentally change the goal of the system from ‘punishing’ to ‘protecting’ underage victims of sexual exploitation. To change the current practice of belittling the problem and blaming victims, Jin-kyeong is first tackling relevant laws. She is bringing together a coalition of a wide array of over 35 key players, including civic organizations, the Korean Women Lawyers Association, publicly funded research centers, and National Assembly members to create a shared sense of urgency and push for a solution. Through the coalition, she developed a united voice to amend the Act, which has been one of the greatest obstacles in progress. Jin-kyeong and her coalition have introduced a new bill which passed through Gender Equality and Family Committee, and are awaiting the decision of Legislation and Judiciary Committee.


Jin-kyeong sees that changing the law is only the beginning. She is creating a replicable, comprehensive system that supports sexually exploited girls through her organization Stand Up Against Against Sex Trafficking of Minors (“10 Up”). Founded in 2012, 10 Up is the only organization in Korea providing specialized support for underage victims of sexual exploitation. 10 Up’s holistic approach addresses victim identification, emergency intervention, and recovery, as well as support for independent living.

One of 10 Up’s unique approaches is to train and hire past at-risk youth as peer counselors to identify potential victims, especially via messaging apps. They join chat rooms, online forums, and personal broadcasting services that are often anonymous and use obfuscated language. The peer counselors can quickly spot and relate to potential victims based on their own personal experiences. They private message potential victims to offer support and invite them to visit 10 Up. They also report apps to the authorities that knowingly enable sexual solicitation and call for legislative changes to ban those apps.

By helping other underage girls, peer counselors regain a sense of dignity and self-esteem and develop meaningful career experience that can help their economic independence. Over the past 6 years, 10 Up has trained and worked with 20 peer counselors who work with professional counselors within the counseling team which handles more than 100,000 online counseling cases each year. Building on this success, Jin-kyeong seeks to expand her model to every major city in Korea by making ground by changing the related law, which will mandate all metropolitan city government to establish support centers for sexually exploited minors modeled after hers. She is also developing a partnership with female IT experts and engineers to foster a technological regulation and solution to combat sexual exploitation online such as mandating preliminary test for sexually harmful factors before releasing IT services.


In addition to these prevention efforts, 10 Up also provides victims with a wide range of professional support for recovery. A group of doctors, psychologists, and lawyers provide support for 1,000-5,000 cases every year, followed by additional help for housing, career, education, and other needs to help the girls from being sucked into sexual exploitation.


Jin-kyeong believes that eradicating sexual exploitation of minors requires a society-wide moral consensus. To help the public recognize the reality of the problem and start to take action, Jin-kyeong has led creative media and art campaigns. For example, she partnered with a new media company for millennials to reframe how the media industry portrays sexual exploitation. Instead of focusing on victims and their personal circumstances, she focused on making the offenders visible. In a series of videos, adult men who lure underage girls were tracked down and questioned for the first time on media. The videos went viral (more than 2500K views to date), resulting in a petition urging the revision of the law participated by 12,619 individuals and 295 organization, and increased donations to 10 Up. She has also launched an exhibition in a major museum in Seoul, sharing a journal of a girl who survived sexual exploitation and various artworks partnered with Japanese civic organization. The exhibition attracted a vast range of visitors from university students to the charge d’affaires of EU in Korea and helped to raise awareness about a rarely talked issue.

Jin-Kyeong attended college in the height of Korea’s democracy movement in the 1980s. She participated in student activism with a keen interest in the intersection of faith and social justice. She was particularly drawn to women’s rights, as she felt it did not get the attention and resources it deserves even within the mainstream civil society. Even while working at a human rights organization, Jin-kyong witnessed her colleagues disregarding the issue of sexual exploitation. She realized that even at a mission-driven organization people were ignorant about the systemic causes and consequences of sexual exploitation.

In 2000 and 2002, a large fire broke out in a brothel in Gunsan, a city known for its sex industry. The fire swept through a part of the city, killing many sex workers locked up in brothels. Witnessing this tragedy and gross human rights violation, Jin-kyeong realized women’s rights movement starts with fighting against sexual exploitation. She served as the executive director of Hansori United Voice for the Eradication of Prostitution and participated in legislating the anti-prostitution act in 2004. Building on this experience, Jin-kyeong founded Dasi-Hamkke Center, a support center for victims of sex trafficking, through the partnership with the Seoul city government and served as the founding director. She led public support for the anti-prostitution act passed in 2004 through media advocacy campaigns.

Through more than a decade of experience fighting for women’s rights and working directly with victims of the sex trade, Jin-kyeong learned that early intervention is key to preventing and recovering from sexual exploitation. It was this insight that led her to found 10 Up in 2012.