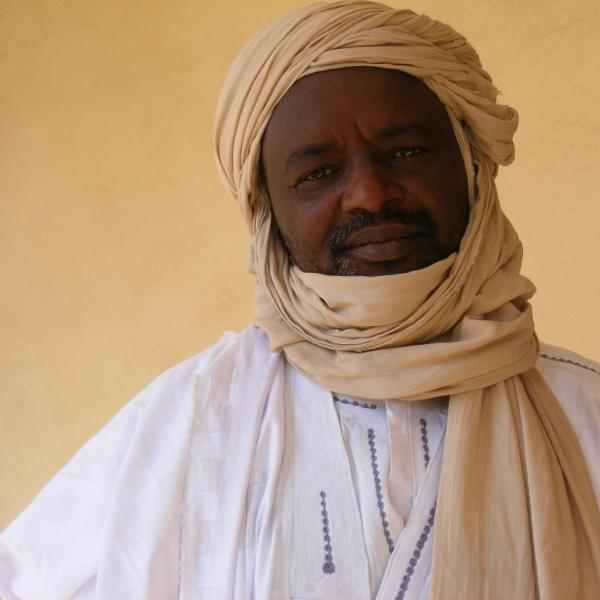 Addressing the long-standing practice of black Touaregs enslaved to white Touaregs, Ibrahim ag Idbaltanat offers an alternative social system based on fraternity and shared heritage to bring the Touareg communities in northern Mali together as one. Stigma and discrimination linked to slave caste identity, coupled with the issues isolation, have made both civil society and the government slow to react. Ibrahim is filling the void at a grassroots level, and assisting communities to reconsider and recreate what it means to be a Touareg.

To address widespread denial of the slave system—including by slaves themselves—Ibrahim had to get Touaregs to acknowledge that slavery existed and was a problem. Ibrahim brought black Touaregs together for discussion and reflection, and eventually invited the entire community to participate. In both private and public meetings, public events such as trainings, forums and cultural events, he encourages dialogue within the community to acknowledge the system and its harm to both individuals and the Touaregs’ community. This approach brings slavery into the public domain for critique and advances Ibrahim’s vision for a new type of Touareg community: A community that embraces all its members, regardless of skin color.

Once the abolition of slavery gained root in Touareg groups, Ibrahim approached citizen organizations (COs) to establish the need for action, especially within professional circles. The slave movement within Touareg communities in the north resulted in the founding of Temedt (meaning “belly-button” in the Touareg language of Tamacheq): The association of the Malian Black Tamacheq people. Thriving membership brought enthusiastic volunteers to set up field offices throughout the country to advocate in new venues. Ibrahim and Temedt connected with organizations whose missions could encompass an anti-slavery focus, and this allowed them to tap into existing resources and networks to promote their cause. By building a network of partners and supporters to compliment a growing grassroots base, Ibrahim ensured the growing institutionalization of the problem.

With enough community support and visibility, Ibrahim has appealed to the government for support. With the administration and other civil society representatives, Ibrahim is working towards the first law in Mali to criminalize slavery. After achieving institutional and legislative support, Ibrahim’s movement will incorporate legal advocacy for slaves, economic development for black Touareg communities, and awareness raising within the education system.

Slave distinction, instituted at birth, is deeply ingrained in the minds of black Touaregs and is not questioned. Treating their bondage as permanent and natural, those considered slaves often do not envision a different future than servitude to their masters. Likewise, white Touaregs view their privileged position as ordinary and expect only submission from black members. The cultural divide between northern and southern Mali is defined; people living in each region do not share a civic identity, nor do they extensively interact. The silence within Touareg communities, coupled with the isolation of northern Mali, has made the practice nearly invisible to the rest of the country, from grassroots to government levels.

COs in this region have had little interaction with slavery due to its suppression. Historically, black Touaregs did not believe they had a right to challenge their position, and they remained stuck in a system unknown to those who could advocate on their behalf. This also has repercussions on the aid and assistance given to the region for famine and other crises. For example, food given to Touareg communities during dry seasons are distributed to the leaders—white Touaregs—who favor other white Touaregs and ignore the needs of black members. Additionally, public spending on education is determined by white Touareg leaders; they advance their schools and leave black schools underfunded and understaffed. Without understanding the historical implications of slavery and its effect on social welfare, COs cannot effectively assist the region.

Institutional ignorance extends to the highest levels of government, whose inaction and avoidance inevitably support the slave system. Sensitivity stemming from armed rebellion in the north, led by white Touaregs against the government, makes the administration weary to confront them on a topic as controversial and taboo as slavery. This system provides privilege and economic benefits that most white Touaregs would not be willing to give up, especially at the request of the state. While the insurgency among the Touaregs has not been linked to slavery but to deeper cultural divisions between the north and south and a lack of northern representation in government, administrative officials prefer to keep tension to a minimum. The results in a refusal to admit the existence of bondage to the extent that it is ignored in human rights conversations. Thus, any discussion of slavery is excluded from the legislative realm, giving black Touaregs no legal recourse to address abuse and exploitation.

Ibrahim tackles the problem of slavery at three levels: Grassroots, civil society, and government. Ibrahim’s activism is founded on raising awareness amongst black Touaregs. The question of slavery is so controversial that civic gatherings and public conversations were previously unheard of. Fear, oppression, and solitude kept all challenges the system to a minimum. He knew that only community discussion and the support of strength in numbers would make black members renounce their slave identity. This was the key to abolish the slave system and move towards a shared Touareg identity.

Beginning with private meetings and moving to larger public trainings, forums, discussions, Touareg culture festivals, and other community activities, Ibrahim encourages public dialogue; formerly secretive and isolated. These events bring together black Touaregs from a number of households and villages, and establish a community and advocacy base. The blatant public challenge to slavery, both from black Touaregs and Ibrahim, has raised questions about his personal safety. To ensure security and to increase legitimacy, he invites local government officials, CO representatives, and white Touareg leaders to participate. With high visibility and large community turnout, most of his invitations are not turned down for fear of shame and/or embarrassment.

The popularity of these forums and widespread consciousness raising creates a large base of supporters and drivers of Ibrahim’s movement. Temedt was founded under a common vision—Touareg brotherhood—giving a public voice to black Touaregs for the first time. There are field offices across northern Mali staffed by volunteers and campaigners advocating for peaceful social change and a common culture in their communities. As membership has grown, offices are being set up in other areas of the country, including the south, and advocacy is taking place among non-Touareg groups, along with appeals for help from mainstream COs. Through new venues such as community discussions in new regions, conferences and other organization-hosted events, Temedt boasts 20,000 members, with 14,000 paying dues.

Due to Temedt’s activism, the existence of slavery is being increasingly recognized in the citizen sector. Average citizens both in northern and southern Mali, as well as COs, are becoming more aware of the problem and the need to address it. Unable to ignore this change in public perception, government officials are working with Ibrahim and others to abolish the practice. Lobbying, advocacy at the executive level, and “shaming”—using anecdotes of slave abuse—have also been used to elicit government participation. A parliamentary working group has been formed to create a law criminalizing slavery in Mali. This will open the avenues of legal advocacy for slaves as well as Temedt’s spread in to other institutional levels, such as education. To compliment the abolition of the slave system, Ibrahim plans by to help black Touareg communities reach their full potential through economic development. The establishment of physically and legally separate black Touareg villages (from the dominant white Touaregs) is an interim step aimed to help black Touaregs learn how to build assets and obtain property rights, while also opening access to microcredit programs to support income generation. Additionally. making school accessible to more black Touareg children will increase educational opportunities as well as provide children and their families with an alternative to a slave identity.

Born to a black Touareg family in northeastern Mali, Ibrahim experienced the discrimination and stigma that plagues Touareg communities. While attending university in Bamako, he returned to his village when a school for black Touareg children was closed by white Touareg leaders. He persuaded the community to send their children back to the school; Ibrahim assumed the position of teacher. He realized the deep rooted habits of submission to social hierarchy and the complex social and economic realities of the region prevented many people from reaching their full potential.

After working on civil society projects in the area and visiting a community self-development initiative in the Yatenga region in Burkina Faso, he founded GARI, a CO based in northern Mali. He began to enable scattered black Touareg settlements to set up schools as the first step to provide an alternative outlook for the children of families that had always accepted their servitude to privileged members of the community. This interaction spawned the meetings and forums that gave rise to Ibrahim’s anti-slavery movement, embodied in his Temedt association. Temedt believes in a link between black and white Touaregs based in fraternity and a shared heritage. Members of the association identify themselves not as Touareg but as Temedt, illustrating the applicability of Ibrahim’s vision and mission to the slavery problem.

Temedt is recruiting members among social and professional circles in Mali and using the press to reach ordinary citizens, COs, and the government.