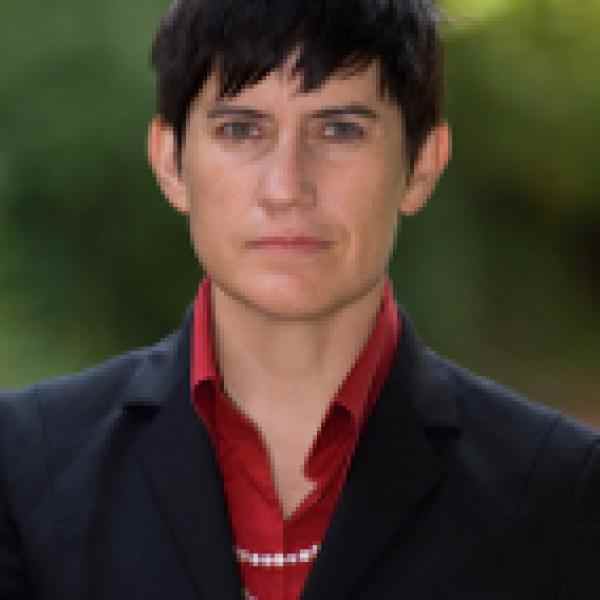 By mobilizing a diverse group of actors from the national press to management consultants to university sports students, Heather Cameron is using boxing and self-defense training to help girls and young women develop the confidence, self-efficacy, and leadership skills to create strong inclusive communities.

Boxing is central to Heather’s strategy to empower young women, especially those living in marginalized communities. Research has shown that sports in general, and boxing in particular, can play a key role in improving self-confidence and personal safety, aiding stress reduction, and contributing to the growth of an individual’s self-discipline throughout puberty, as well as other times of personal development. These benefits are much needed, especially among some segments of Germany’s immigrant communities, where girls and women’s roles are limited; Heather uses sports as a vehicle to shift self-perceptions and challenge disempowering societal stereotypes. Among an important constituency of her target group, boxing is not perceived of as a sport or recreational activity, but as a self-defense tool, allowing socially conservative communities to approve of its introduction in an all-girl environment. Through partnerships with local organizations, girls participating in Boxgirls’ programs also participate in other developmental programs addressing key life skills.

Heather aims to achieve three levels of transformation through Boxgirls International: 1) On a personal level, she knows that boxing will engage and empower girls in a physical activity in which they will excel, improving their health and building their confidence and aspirations 2) In combination with boxing, Heather aims for a broader transformation in which girls grow their leadership skills and are empowered to impact their communities; using skills-based curricula and outreach programs, ranging from personal safety presentations at schools for young girls and women to pursuing entrepreneurial activities through partner organizations 3) At the societal level, Heather hopes Boxgirls International programs and partnerships with citizen organizations (COs), governmental institutions, national Olympic programs, and so forth, will help to change the pervasive view of girls and sport by provoking discussion around the empowerment of girls.

Strong girls make strong communities. Unfortunately, in many communities a girl’s ambition and confidence are discouraged and many smart, confident girls turn into docile women. Heather locates Boxgirls’ projects in challenged neighborhoods, i.e. economically less developed and often inhabited by migrant families facing social and economic hardships. Young girls living in such settings are often excluded from decision-making and have few opportunities to learn and experience leadership behavior. Instead, they are often taught that women’s typical role in society is to please others and be subordinate.

Furthermore, during puberty disadvantaged young girls face many other identity issues, including changes in their body perception and self-image. The absence of positive role models and an overwhelming presence of “obedient” stereotypes hamper them from developing leadership skills and their potential to become effective changemakers. While middle- and upper-class girls have opportunities to develop into leaders (i.e. established programs seek them out), families of immigrant girls may see sport as a luxury. Due to cultural norms, many girls are discouraged from taking part in physical activities after puberty. Heather ensuring that the voices of young women from the marginalized parts of society are heard, and that they have the tools to help improve their living and working conditions.

German government programs have tried many approaches to integrating migrants, with various degrees of success. However, recent statistics on social mobility and access to further education show that Germany is still one of the worst countries in Europe concerning equal access to education and careers. German schools are also looking for new ways to increase school attendance, participation, and the performance of disadvantaged children. Thus, they are beginning to see sports as a solution to engage and shape young people. However, stereotypes around women and girls still create barriers against using sports.

As a professor of educational science and sport for two and a half years, and a volunteer coach for over ten years, Heather is an expert on the positive effects that sports has on girls. Having experienced the power of women boxing during her studies in Canada, she realized that combat sport and particularly boxing, are strong tools to empower women. Boxing helps one understand the strengths, weaknesses and the physical, psychological, and spatial limitations of your body. As a contact sport, it also forces the boxer to confront their fears and redefine their self-image. Thus, of all sports, boxing is probably one of the most powerful to help achieve control over oneself and one’s life.

Heather utilizes boxing to provide useful structured activities to teach girls self-efficacy, discipline, teamwork, and self-defense skills. Thus, her idea is not just to use girls’ boxing to engage girls simply around sports, but to use boxing as a way to gain access to a specific group and help them understand their own strengths. Through boxing, girls are sensitized to gender issues and begin to question deeply rooted roles—discovering their potential and leadership skills. Thus, boxing becomes a force for change in communities, led by girls. For the first time in their lives, girls are encouraged to take on active roles in their communities and overcome their own, but also society’s gender prejudices, at a critical stage of their physical and mental development.

Heather first founded a boxing club in her own neighborhood in Berlin, home to a high percentage of immigrant populations and among one of the most impoverished communities in Germany. Girls are recruited through an ambitious outreach process that includes a web and social media strategy, as well as active presswork with local and national papers. Once the girls are in the gym, Heather works with them to acquire sporting and other life skills through weekend seminars. With an all female training team, she ensures the gym environment feels safe and friendly for all the girls.

This approach has already showed impressive results with the girls and has created new role models. Financed by the German Children and Youth Foundation, Heather’s project was part of their “strengthening girls” program and had the best evaluation results among all the supported projects. Using this momentum and contacts from her university, Heather quickly spread internationally, starting Boxgirls International projects in Nairobi and Cape Town. There, in addition to their boxing training, girls have the chance to take part in conflict resolution and communications training, as well as activities with partners providing general health, HIV/AIDS, and domestic violence education.

Heather also works on an advocacy level, developing curricula in cooperation with leading sports education universities, advising the German Olympic Committee on sport and social inclusion, raising the profile of women boxing in the context of the London 2012 Olympics, and developing sector infrastructure with amateur boxing associations in Germany and abroad. Heather’s efforts are helping to promote women in the boxing arena. London 2012 will be the first Olympics to include women boxers and there is already a significant change in the way national sport federations and ministries are beginning to support women’s boxing.

Heather is also spreading her program to schools, be it in Germany with Sicher im Kietz (German for Safe in the District) or programs run in Nairobi. The connection to personal safety is a key element of the program. She is also leveraging her impact through strong PR and media work and entering and winning several major awards (i.e. including the German StartSocial competition where Boxgirls was highlighted by German Chancellor Angela Merkel, and winning the Nike/Ashoka Changemakers competition). Heather and Boxgirls have built strong ties through domestic and international networks that have made her program expansion possible. She is also one of the founding members of the Women Win Foundation and a consultant to the International Paralympics Committee.

A key element of Boxgirls’ growth and support has been to connect with leading corporate partners, particularly those focused on women’s leadership. Rising leaders within corporations are invited for half-day and full-day workshops with Boxgirls and their students. These sessions are designed as broader corporate trainings for the women, where they both become inspired by the work with young girls, and participate in many of the same physical and leadership training programs. Alumni of these trainings sessions become major supporters of Boxgirls’ programs.

Heather’s goal for expansion is focused on raising the profile of girls’ boxing and developing a core training program, with modules that can be adapted and incorporated to suit the needs of the communities in which they are adopted. She plans to expand Boxgirls to several German cities, but anticipates that future expansion will partially rely on other gyms, girl’s leadership programs, and other organizations adopting and developing Boxgirls as a core element of their programs.

Heather discovered her passion for sport from an early age and for some time, she has been as active as an athlete. At the age of 12, she deepened her engagement by taking the responsibility to be an official coach for a baseball team. Heather’s love for sports also comes from her family, where her mother was an ice hockey volunteer administrator and took turns running the local, regional, and provincial hockey associations.

At 16, Heather started a software business, and has had several jobs in the IT and change management sector. However, having faced sexism and discrimination in sports and at work, she was determined to find a way to change it, and was constantly looking for a way to do more for her community, especially to change perceptions and the role of girls. Parallel to an impressive academic career (Heather has a Ph.D. in Social and Political Thought and was German Professor of the Year, 2009), she has been developing skills in various areas key to her project: Fundraising, strategic planning, and international quality assessment.