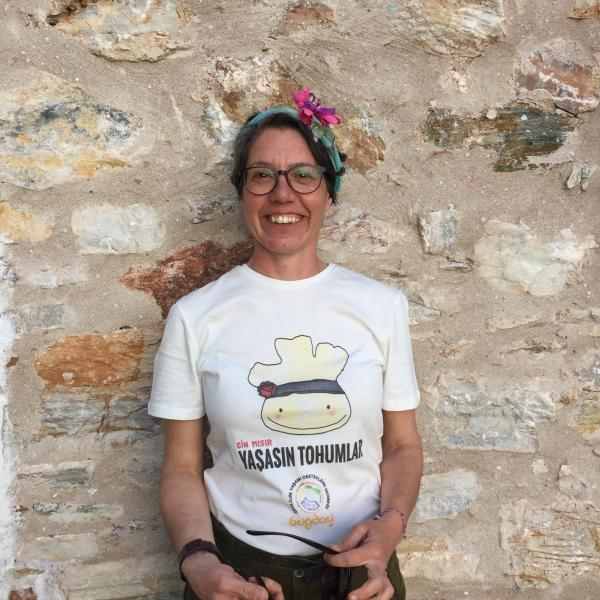 Gunesin Oya Aydemir is strengthening conservation efforts in Turkey by helping and supporting small but capable nature conservation groups move forward with efficient and directed initiatives that draw on the best strategies of a national network. As the president of Nature Society, she is launching a national conservation awareness campaign that aims to conserve Turkey's biodiversity. She is also supporting other citizen sector organizations working for cultural diversity conservation and for ecological living.

Having worked in most facets of conservation&#150;species monitoring, research, project and resource management, lobbying, nature education and awareness&#150;Gunesin sees that what is needed now is not more citizen-led groups, but greater capability and professionalism among those that already exist. Thus, she has turned her attention to those organizations that are too small or disorganized to attract international funding, sustain their efforts, or contribute effectively to a national conservation plan. To strengthen these peripheral but critical groups, she arranges resources&#150;educational materials, volunteers, information infrastructure, funding, and guidance in project management&#150;and links them through frequent newsletters, email lists, and workshops. Through these measures, Gunesin hopes to eliminate much of the duplication and waste that slows progress, allowing common strategies and clear, realistic targets to emerge from the national network&#150;to conserve the region's endangered ecosystems, introduce effective legislation, and educate and involve the public in decision-making to transform environmentally destructive practices. To support these efforts, Gunesin is part of the strategy team of a "zero extinction" campaign, the first of its kind in Turkey, to raise awareness of imminent threats to ecosystems, species, and people.

Harmful chemical fertilizers, polluting factories, dam projects–these are among the familiar culprits to environmental destruction the world over. Turkey is no exception. But as this country is wedged between Europe, Asia, and the Middle East, forming a land bridge, the problem of environmental destruction presents an especially worrisome set of problems for Turkey's many rare species for which extinction is a real possibility. Threats that more directly affect human beings loom as well: construction of dams will displace thousands; erosion will destroy arable land along the coast; hasty irrigation and poorly planned drainage projects will dry up once fertile valleys, putting farmers out of work; chemical fertilizers will seep into the water, killing fish and sending fisherman to already crowded cities for work; unplanned and unsustainable urbanization and tourism will cover not only wild vegetated areas but also fertile agricultural areas. Conventional systems like mass tourism and intensive and monoculture agriculture shape people's mindsets and everyday actions–with ensuing destructive results for the entire ecosystem and all its elements.

The complexity of the state bureaucracy ensures that concerned citizens who wish to voice their opinion are especially taxed to do so. The three responsible ministries–Culture, Environment, Forestry–have overlapping authorities, and each is equipped with directorates and regional officers that further obscure the channels of citizen action. With no road map to help navigate the bureaucracy, many individuals and small environmental groups simply give up, and many state projects–like an approved 20-year, 423-dam project in Anatolia–are designed with no input from citizens.

Nonetheless, many citizen-led efforts in Turkey now focus on natural protection and conservation, signaling increased public attention. Environmental organizations now number over 400. But as large national organizations become subsumed in the agendas of international groups, Gunesin sees that it is the smaller groups working locally that hold the greatest possibility for change. Without greater capacity and a coordinated effort among them, the animals, plants, and people of Turkey, and indeed the world, will lose out. In the shuffle to raise money, draft proposals, write reports, or simply get organized, these groups lose sight of who is doing what, what the priorities are, and how everyone needs to work together to reach goals.

Gunesin has three primary approaches: strengthening the capacity of conservation groups by raising broad public awareness, establishing a wide network between all stakeholders of nature conservation, and professionalizing the field of conservation and natural resources management. Combined, these strategies will result in a coordinated, sustained effort to protect the environment and the humans beings, plants, and animals that rely on it.

Having worked with conservationists across the country, Gunesin knows the current capacity of the environmental movement in Turkey. She sees that the roughly 40 citizen organizations currently receiving UNDP grants are functioning quite well. But for the second-tier groups that are headed by committed, capable leaders, but are small–sometimes with only three to four staff–there is little help in terms of funding and building capacity. It is these that Gunesin sees as critically important to a national push. She guides them in designing the best framework to foster sustained collaboration with scientists, lobbyists, journalists, representatives from private enterprises, and government officers. For some projects, she is available to help directly, bringing her experience to bear on specific situations. Other projects require the expertise of others in the network, which she arranges. Where direct help is unnecessary, Gunesin supplies ready-made tools like step-by-step guidelines for promoting legislation to government ministries. To make such tools accessible, she translates them into a language that is easily understood by practitioners–this means not only translating information from international conservation groups into Turkish, but also translating the presentation of scientific or government work into clear, how-to action steps.

Gunesin sees that mapping the strengths of those in the network is key to sustaining these efforts, so she is building the information infrastructure necessary both to catalog strengths, weaknesses, and needs, and to put people in touch with each other directly about issues ranging from species and pollution indexes to partner organizations in other parts of the country or world. In this way, she hopes to create a movement that, like an organism, will move swiftly, use resources sparingly, and channel energy according to the principle of efficiency.

To generate new ideas and theories on conservation, she is also establishing a think tank team made up of independent conservationists in Turkey. Approaches to nature conservation are mostly imported from Europe and the United States, but Gunesin believes that Anatolia and its culture can provide a new model and establish best practices for global conservation activities. This group can make a real contribution to conservation activities as a philosophy. Gunesin is also bringing together larger national conservation organizations to galvanize support for policymaking through their diverse knowledge, experience, and civil power.

Gunesin sees that supporting the work of public groups calls for a broad national campaign both to raise awareness of imminent threats on nature and to emphasize opportunities for change. One of the most successful efforts thus far has been the publication of a special issue of Atlas Magazine, an annual magazine that focuses on the natural world of Turkey. An impressive publication, the 150-page magazine highlights a range of issues relating to conservation–ecotourism, biodiversity, industrial and agricultural practices, development projects, and consumer and production trends. Through its in-depth and reader-friendly analysis, the publishers–Gunesin is one of two–reach a broad audience, ranging from seasoned conservationists to those just beginning to look into these issues. High quality photographs complement the text, showing the country's breathtaking natural beauty and the threats to it. Importantly, it will provide a useful platform for small conservation groups, allowing them to build on the momentum of the campaign.

When she was a child, Gunesin thought she might grow up to be a biologist, and if not that, a private inspector. At 31, she has found a way to be both. Gunesin has tracked down and studied every creature imaginable: monk seal, mosquito, black vulture, marbled teal, ferrugineous duck, sea turtle. But Gunesin was not always set for this course. As a teenager, she passed one of the country's toughest college entrance exams and enrolled in dentistry school. Six months into the program, she started all over with biology–not an easy feat in the Turkish education system. Once in the biology department, she proposed to a professor that she work on one of the largest ecological research projects run by the university. As part of the team, she put theory into practice, learned field techniques, and developed relationships with local people. She cofounded a bird-watching club, and through this group she was introduced to other environmental efforts and organizations in Turkey and abroad. Later, she won an offer–and a scholarship–to pursue her doctoral studies in the United States. She felt that her conservation work at home required her full and immediate attention, though, and so declined the offer.

Instead, she sought firsthand experience with small-scale conservation efforts and took a job in the seaside town of Bodrum to head an environmental initiative there. For two years, from 1996 to 1998, she brought together organizations fraught with conflict, helped them design common initiatives, and gained experience with policymaking and lobbying. She formed a library and documentation center and prepared a curriculum for schools. She helped the community transfer the data they had gathered from species monitoring into a design for a protected area. The area in which she worked, home to many threatened species–endemic palm tree, monk seal, sea turtle–is now a state-protected area. From this experience Gunesin saw that one person, equipped with the right tools, could draw on the resources and contributions of others to catalyze change and realize tangible results.

Seeing that it was now important to gain a macrolevel perspective, she moved into a position with DHKD, one of the largest national environmental organizations. During her four years with the organization, she designed a feasibility study for a biodiversity atlas of Turkey, a project for which she developed the needed infrastructure, database, and human capacity to carry out the work. She also traveled in Turkey and abroad to gather data and see how similar projects had been set up. Drawing on the contributions of colleagues, she prepared and disseminated easy-to-use tools for citizen groups, relating in plain language how to approach ministries to influence policies and win government support. To advance the part of her work she felt was most urgently needed–strengthening and linking the efforts of local groups–Gunesin stepped down from DHKD in August 2002 to begin her current work.