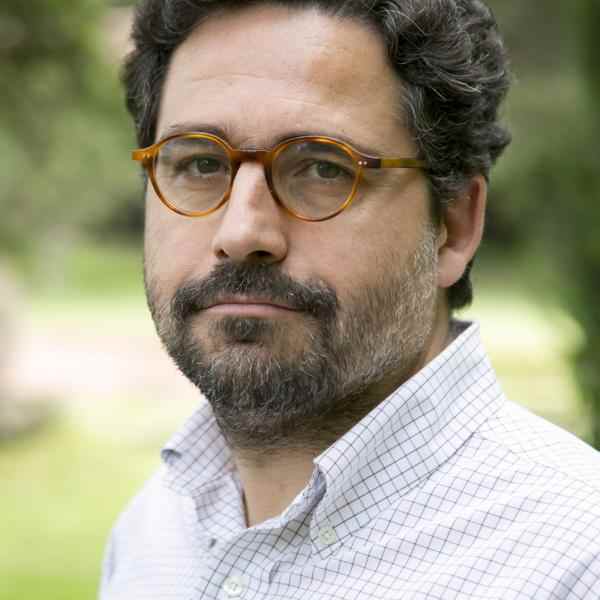 Gonzalo has created a new information-generating model to encourage a more informed public debate by influencing media outlets and policymakers worldwide to cover social issues in a new way. He helps society understand the reality of social challenges by ensuring that truthful information gets the relevance it deserves.

Gonzalo has created a new model of media influence in Europe, that improves media quality by providing media outlets with diverse, research-based and representative content. He feeds and transforms the way journalists and media practitioners work by triggering a new conversation and changing the lens through which social topics are perceived. As a specialized media foundation – currently focused on the global social issue of migration – porCausa brings together solid research, creative narrative and a powerful network of more than 170 journalists in Spain and the world. Their goal is to influence how people are informed about social issues, to fight destructive myths and to make public and private sectors accountable for their decisions.

Gonzalo is transforming the production, dissemination and financing of public interest information. To do so, he establishes which are the issues that need to be researched, fundraises for them, and creates a collaboration system between investigators (sociologists, anthropologists, philosophers etc.), other experts (lawyers, engineers) and external journalists, storytellers and producers. Currently, he has formal partnerships established with national and international media networks such as The Guardian, El País, Univision, Center for Global Development, and another dozen national and European radio, TV and press outlets.

He has set up a network that co-produces content that denounces the excesses of current systems, revealing human rights breaches and malpractices in the public and private sectors and proposing fair and intelligent alternatives. By ensuring that mainstream and influential media propagate these stories, Gonzalo represents marginalized voices and provides an alternative to negative narratives. He is currently focused on changing the lens through which migrants are seen, shifting from being regarded as the “problem” to being part of the solution.

Changing public narratives is a complex and slow process. But porCausa’s impact lies mainly in its capacity to impact influencers to change the public debate. In addition to the 170 journalists and 50 senior researchers who have participated in and have been influenced by the projects led by the foundation, porCausa organizes debates – in the media or behind closed doors – with policymakers, opinion leaders, NGOs, experts and influencers to share the evidence of their research and boost the development of a more just and effective legislation. By getting this material published, in a variety of formats and channels, Gonzalo puts pressure on the affected parties to reflect and take responsibility for their acts, whilst simultaneously informing and encouraging people to demand that politicians reverse the current situation.

For the last three years, he has focused his work on the topic of migration, understanding it to be one of the most pressing global issues. In the long term, his strategy is to focus on other unrepresented topics, using the same model to reveal other issues with no proper media coverage, such as child poverty in developed countries.

Quality media content that reaches the general public is a strong initiator of social change. Nevertheless, around the world, media outlets are increasingly unable to foster informed and engaged communities – prerequisites for the maintenance of liberal, fair and democratic societies.

The information that reaches society is based more on interpretation than on facts. Manipulation and distortion of information prevent accurate diagnosis and public accountability and therefore also prevent the design of solutions to solve social problems. Furthermore, due to the new configuration of the information industry, certain information on sensitive issues do not reach the public, or are presented in a sensationalist or manipulated way. Post-truth societies are an increasingly worrying reality that prevents healthy social transformation.

More specifically, the subject of immigration has been covered by the media from a reactive prism, and, as a result, migrations are perceived as negative by society at large. The public see it as a problem rather than a potential source of economic, cultural and social benefits: in a study of porCausa, they found that over 70% of Spaniards have declared that there are “too many immigrants”, while 65% consider they take more from the system than they contribute, and 65% think that Spanish laws are too tolerant towards immigrants. The debate has shifted to “why do foreigners have access to social help?” instead of “why are these people fleeing their homes and how can we manage this situation so that it is beneficial for all involved?”

porCausa doesn’t work as a mere content provider or a source of information, but as a strategic partner that is embedded in the journalists' working system and supports them during the process of creating information products. Once a project is defined and fundraised for, porCausa brings together a broad team of collaborators, including journalists, researchers, producers and other experts to work collectively.

They offer toolkits, guides to understand the matter, thorough research and evidence-based approaches. Throughout the process, porCausa advises and collaborates in the production and editing of the materials, and ensures that they are published in the mainstream media. porCausa does not charge media outlets for its work, in order to ensure editorial independence and control of what is being published.

Gonzalo aims to reach systemic change by changing the way the influencers (journalists, media outlets and researchers) work and think, establishing a network with a modular structure. It means that those who begin to work with porCausa are encouraged to, at a certain point, start collaborating independently among each other using Gonzalo’s approach and model of mind-set shifting.

porCausa managed to create a unique position for itself, working with all parts of the system without being perceived as a competitor or a threat. porCausa prioritizes its role of being a supporter in the production of contents for third parties, which are all considered potential partners: media, think tanks, NGOs and universities, among others.

By leveraging his networks, Gonzalo works with a number of traditional and new media platforms, both Spanish and international, reaching an audience of over 50 million up to this point.

With his collaborative network model, he is flexible enough to reach key players that amplify and influence public debate everywhere in the world. His international media partners include The Guardian, El País or Univision, and he works with organizations such as the Overseas Development Institute and the Centre for Global Development, two global references in migration research.

He is researching the migratory issue by subdividing it into specific themes (youth, refugees, gender…) and regions (Europe, Northern Africa, Latin America), constantly introducing new areas of study. His project is scalable in three levels:

1) By further deepening the analysis of migration;
2) By extrapolating this model to other complex research areas (such as child poverty in developed countries, an issue porCausa already worked on);
3) By extending the network of journalists, media and researchers to include more collaborators, especially adding diversity to the team (for example, more conservative media outlets).

Open Society, an early partner of porCausa, has recently stated that they would like to replicate and apply Gonzalo’s model to other regions of the world, with his guidance.

A recent and well-known research produced by porCausa, disseminated in collaboration with two national newspapers (El Confidencial, with 11 million daily online readers, and eldiario.es with 7 million daily online readers), refers to the CIE (Holding Centre for Immigrants) in the Canary Islands, which had been empty for five years. In the light of a thorough investigation conducted by Gonzalo’s foundation, the Government was made to recognize, in parliament, the expenditure of five million euros in alleged services to the CIE, that never actually materialised. This generated a significant public debate and led the political party Nueva Canarias to bring the issue to the Senate and directly question the Minister of Home Affairs. The illegal funding was immediately interrupted.

The reports, articles and investigations created by porCausa are regularly cited by politicians and decision makers, and have been used in public hearings and parliamentary debates at the European Parliament and the Spanish Senate. porCausa’s content has contributed to setting the political agenda in Spain on migration.

Gonzalo is organising the first International Congress on Migration Journalism in Spain on October 2018, with confirmed participants from the New York Times, The Guardian, News Deeply and many others. He has positioned porCausa as a global reference in new media approaches.

Gonzalo studied in a Jesuit school specialised in offering an education rooted in deep social values, and he has always felt the need to get involved in social and political justice.

His first entrepreneurial and transformational experience was at the age of 18, when he joined Proyecto Hombre, an organization that supports the prevention and treatment of drug dependency. He worked as a “buddy” to heroin addicts. Soon after starting, having identified a gap in the services the drug-dependents were receiving, Gonzalo and his friends set up a shelter project (Proyecto Acogida) where they accompanied the person 24 hours a day, and set up a network of apartments to provide them with a safe haven. Gonzalo worked in each step of the project, fundraising, reforming the apartments, and managing properties. He spent 5 years in this organization, until the initiative was fully self-sufficient. This model is still being applied today in the organization.

Whilst he studied business at university, he volunteered in Chile during the summers to work with the Jesuits, in the poorest reality of Chile. His work was focused on education among glue-addicted children living in the slums of Santiago.

Later, he worked for 10 years in one of Spain’s most important NGOs, Intermón Oxfam, as head of research. There, he made a network of international contacts and gained experience in international agreements, fair trade, emerging economies and social mobilizations.

Gonzalo first became involved in immigration in the 2005 crisis, when 70,000 immigrants reached the Spanish Canary Islands from Senegal and Mauritania. It impacted him enormously how Spain, which was in the middle of an economic boom, shied away from aid and management policies and simply tried to get rid of the problem by making aggressive agreements with other countries. He travelled to Senegal and Mauritania to learn what was going on and write a report, in order to create a position paper for Intermón Oxfam on the issue. For Gonzalo, this inability to positively manage immigration was a huge opportunity cost and he wanted to contribute to the creation of a constructive process. Through this experience with Intermón Oxfam, however, he witnessed the growing gap between the information they were collecting and the people it was supposed to reach.

In 2009, he took a sabbatical to study a master's degree at Harvard Kennedy School. He decided to leave Intermón Oxfam, following his urge to start his own project. After many years of activism and research, Gonzalo believed that the system in which he had spent many years was ineffective, or not as effective as it should be, in transforming inequality and poverty.

Working closely with journalists, he realized that quality research is not widespread because it is not designed to be communicated to the public. At the same time, he was experiencing first-hand the crisis of an entire system of information generation and distribution and saw the space for innovative solutions. This was the final spark to start porCausa in 2011.