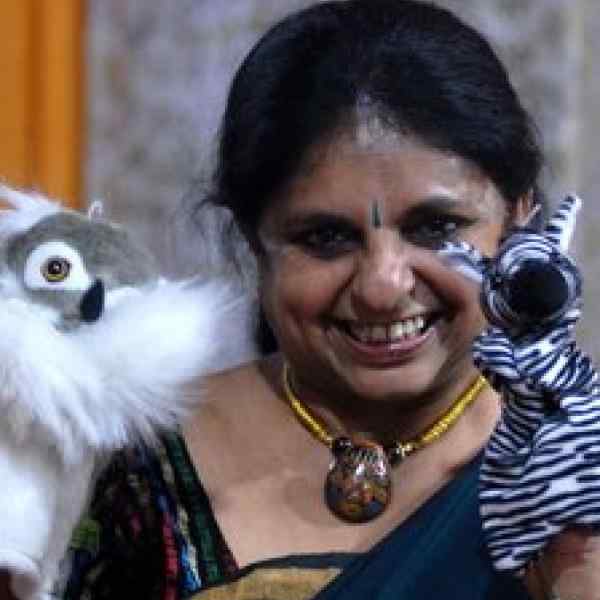 Geeta Ramanujam is injecting new life into Indian classrooms by reviving the art of storytelling–a cultural tradition forgotten by modern education–and making it part of the primary school curriculum.

What Geeta sees in Indian schools troubles her: teachers teach straight from textbooks, and students pass their exams relying on the age-old art of rote memorization. Geeta wants schools to foster in India's children the creativity, independence, and participation that will make them successful adults and citizens. To replace monotony with variety, apathy with enthusiasm, Geeta has begun a project to use storytelling as a teaching tool. Although some Indian teachers have told stories to children, this is usually a departure from the curriculum; Geeta links stories to the textbooks and curriculum in use, complementing and reinforcing them. Her program encourages children to doubt, examine, and question the society they live in.

In India, teaching can be dull, regimented, stagnant– preferring the absorption of facts to critical thinking. Consequently, children are not encouraged to cultivate creativity and the spirit of inquiry. Rigid schools fail to understand and address the specific needs of physically challenged children and children requiring special education. Not surprisingly, teachers, who also find their school hours boring and repetitive, have lost interest in experimenting with new teaching techniques. Although some teachers search for better teaching methods, they can't always find them, and what they do find will probably not fit into the mainstream curriculum. Beyond some limited efforts by government and concerned citizens, the education system enjoys few prospects for improvement.

Although Geeta is aiming for major educational reform, she knows that she can't simply criticize or challenge existing practices from her place outside the system. Instead, she develops mutually accommodating relationships with schools in which storytelling supports existing subjects covered in class, such as language, math, and crafts. Because Geeta's approach can easily be implemented within the existing school structure, several schools have adoped her techniques, first by having her and her colleagues visit and then by participating in the training they offer. Geeta and her group Kathalaya (which means "house of stories") have been telling stories in six schools in Bangalore and other parts of South India, including a school for deaf-mute children and mainstream government schools.

Though she loves working with children, Geeta's more enduring mission is to train others to use storytelling as an educational tool. She conducts one to three day workshops for teachers, librarians, trainers, administrators, and parents. These sessions show participants how to tell stories and integrate them into existing courses. They learn to classify stories, develop textbook links, and employ special techniques for telling stories for children. They get exposed to various forms of storytelling, such as picture stories, puppet theatre, mime, shadow plays, and clay modeling. Creativity is encouraged, so participants come up with their own stories based on educational themes.

Geeta is now establishing a resource center in Bangalore, the only center of its kind in India. The center will house a full library of books, audio and video cassettes, storytelling kits, masks, puppets, worksheets, and CD-ROMs. The center will also research and prepare stories for specialized subjects–astronomy, botany, and history are examples–by working with subject experts. Her program also subtly helps the revival of the ancient art and tradition of storytelling by collecting folk and traditional stories and exploring their uses.

The program is now spreading to more government schools and organization-run schools as its efficacy has been demonstrated successfully. Kathalaya plans to establish a network of schools that have adopted its program for exchange, interaction, feedback and mutual strengthening. To expand both the reach and the scope of her work, Geeta promotes storytelling on radio and television, and is working with organizations in Karnataka to communicate messages about health, HIV/Aids, environmental awareness, and gender equality. Looking to the future, Kathalaya has been documenting its work for the past two years in preparation for a widespread effectiveness study.

In Bombay, Geeta Ramanujam grew up listening to stories. While her mother told native tales from her Tamil village, her father read her Oliver Twist and Uncle Tom's Cabin.

The oldest daughter, she was married off even before she completed school. However, marriage did not stop her education, and three years after her daughter was born she returned to school, went on to a post graduate degree in Economics, a degree in Education and eventually a degree in Library and Information Sciences.

Geeta's interest in new teaching techniques crystallized during her travels through Canada and the United States, where she volunteered at a neighborhood school. She used stories and rhymes to break the racist attitude against blacks and Indians. Back home she went on to complete her studies as she took up the job as a teacher at a nursery school in Bangalore, where she was known as "Aunty Lollipop" or "Aunty Story" by the children.

Eventually, she formulated the social studies curriculum at the upmarket Krishmanamurti School, where once again she introduced lessons with stories. "Once you get the children's attention there is no looking back, and that happens in the first ten minutes," she says.

Over the next ten years, Geeta's life began to revolve around storytelling. She developed the school library, setting up different corners for reading, reference, and storytelling–the children's favorite. Parents who were interested in Geeta's approach helped her set up storytelling workshops. Children flocked to the workshops, parents began to ask for more, and Geeta knew that storytelling had come to stay. In 1992 Geeta began to write the newspaper's Young Children's column, and has published more than three hundred articles.