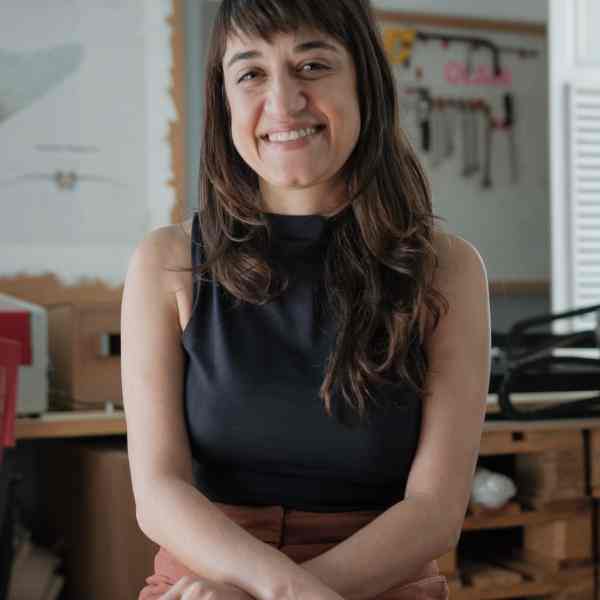 Aware of the growing importance that understanding and building technologies has today, Gabriela is working to increase the diversity of gender, race, and age by flipping the approach to learning technology and promoting digital inclusion.

Gabriela created Olabi, a social organization that started in 2014 as a makerspace and innovation hub in Rio de Janeiro, to bring new audiences into technological education programs in order to tackle social problems relevant to those audiences. She sees that technology is the future, particularly digital technology, and to be a full citizen in the society and to have access to jobs and even rights, everyone needs to understand how to work with it. She also sees that these skills are underdeveloped in women, especially black women, older people, and children from various economic levels. She is working to bring technological skills to these populations.

Gabriela is doing this by flipping the approach to learning technology. It’s not about straight-up teaching of technology, assuming people will know what to do with it once they learn. It’s about finding people where they are and introducing technology learning into those contexts. For black women, she created in partnership with Silvana Bahia, with whom she shares the organization management since 2017, a community of black women already in technology to work together, give each other strength to grow in their knowledge, bring in other black women to learn and connect to positions in the market.

With older people, she got them to teach courses in various subjects of their expertise, e.g. cooking, knitting, other hobbies, and showed them how to use Zoom and other internet-based skills to do that. She shows people how they can enhance whatever they are already doing by bringing in relevant technology at the right time. At the same time, she also works to increase the demand side by working with major technology companies to increase the diversity of their teams.

Gabriela organizes Olabi as a great storehouse of high-impact initiatives and programs that can evolve and become autonomous organizations or established and tested methodologies to be replicated by other institutions with scale. As an innovation laboratory, at Olabi, Gabriela is always creating and testing new methodologies to address urgent problems of the field and, once consolidated and tested, she encourages replication by large-scale public and private institutions. For the future, she wants to continue creating strategies to build a technological and innovation ecosystem with great diversity of gender, race, and age, in which there will be a greater understanding of the role of new technologies - considering their critical role in building a fair and inclusive world.

The technological production environment in the last decades has been strongly marked by the presence of men. The lack of women and black people working in Science, Technology, Engineering, Art, Math (STEAM) areas, especially in Brazil, represents a problem as it can contribute to oppressive systems and algorithms being designed, which automate and scale human behaviors that have a negative impact on society. The small number of women in this area is due, among other factors, to the symbolic repertoire that associates the activity of both research and performance in the field of technology to male tasks. As technology is an area that concentrates power and opportunities for those with technological literacy, it also has the potential to generate income and jobs for the most vulnerable people who are currently distant from the process of developing technologies.

According to The Future of Jobs 2018 report from the World Economic Forum, creativity, critical thinking, and problem solving are the three most important skills for professional people of the future. For the international body, the mechanization of jobs accentuates the need for more human skills and in dialogue with technological development. The people capable of working these skills together with technical knowledge about how machines and computer systems work are the ones who will take the lead in the near future.

The technology sectors are the ones that generate the most job vacancies. According to the Brazilian Association of Startups (Abstartups), 420,000 workers need to be hired to reach the companies' goals by 2024, but those who have been occupying these opportunities are mostly white men, young people from middle and upper socioeconomic classes who began their trajectory in formal educational institutions. This represents an important problem as it excludes a large portion of the Brazilian population, which is 54% composed of black people and 51.8% of women; at the same time that it can lead to racial and gender bias in the production of technologies.

In 2014, Gabriela founded Olabi Makerspace, an innovation space in Rio de Janeiro. At that time Olabi was configured as a space for experimentation and sharing of tools, resources, and knowledge, and in this place, Gabriela and her colleague create programs aimed at solving specific problems by engaging with the universe of technologies. For instance, in 2015, in partnership with Observatório de Favelas, Gabriela developed the program called Gambiarra Favela Tech, an immersion to develop practices and activities based on electronic circuits and “high” and “low” tech applications, aimed at young residents of Favela da Maré to stimulate their interest in the technology area as well as stimulate their artistic and creative potential. In another case, “Learn with a Grandmother” is a digital platform started in 2020 that promotes the digital literacy of people over 60 through workshops led by this group for people of all ages, thus promoting intergenerational learning and valuing the accumulated knowledge of the elderly population while promoting their inclusion in the technological environment.

In 2017, Olabi became officially a social organization with a mission to having more diversity in the innovation scene and expanded its actions beyond educational content.

To reach diverse audiences in a broad way, Gabriela establishes partnerships with civil society organizations, public agencies, and private entities. The innovative methodologies created at Olabi, such as “Computação Sem Caô”, which had the mission to spread knowledge about computational thinking in an easy way and related to everyday themes, and “Great Inventors,” workshops that aim to stimulate interest of children by STEAM, have already been used in schools, cultural centers, and national educational organizations such as Sesi Nacional (National Industry Social Service). With that same institution, Gabriela organized workshops in a robotics festival for more than 20,000 people, bringing art and critical thinking as the focus of the process, encouraging them to be multipliers of this thought in the classroom. She is also part of the Fablab network, which are innovation spaces for digital manufacturing across the globe. These Fablabs are equipped with tools and materials for production technology, stimulating innovation through prototyping in a collaborative environment.

In addition, Gabriela works as a curator and organizer of events about technology that are widely covered in the media, giving visibility to in-depth discussions on the relevance and urgency of having more diversity in technological production. She also works in a TV show from TV Futura, an educational TV in Brazil, about technology projects with social impact. In partnership with TV Cultura, a public TV in Brazil, she is building a program that approaches technology from a humanized perspective and with accessible language.

In 2020, more than 100 large companies in the country contacted Olabi to understand how to increase the diversity of their teams. For companies considered strategic, that is, those that have the power to influence the practice of other companies in their field, Gabriela developed with Silvana Bahia, her partner at Olabi, specific campaigns such as the Enegrecer a Tecnologia project, created with ThoughtWorks, which resulted in a mapping of the current technology scenario in terms of diversity and the creation of hiring and training programs to raise up the black employees from their positions. This is also the case of a current hiring campaign being designed with Google in Brazil. And at the moment, Gabriela and Silvana are consolidating and systematizing a practical ebook in open license so that many other companies can use it as a guide to increase the diversity of their teams not only through inclusive hiring processes but also with continuous employee training programs, raising them from the bottom to the top of the companies.

She is constantly focused on fostering the power of technology to meet social interests and urgencies. In the first wave of COVID-19 in Brazil, she brought together NGOs, universities, and makerspaces in the country to share best practices and exchange technologies and experiences in a common online platform, called ProtegeBr. The initiative played a key role in boosting the production of personal protective equipment (PPE) and other medical supplies that were lacking in hospitals. 250 initiatives across Brazil were mapped and benefited from the platform, that could give systematize and give visibility to nearly 1 million face shields that were produced and donated across the country.

Gabriela sees Olabi as a great storehouse of high-impact initiatives and actions that can evolve and become autonomous organizations or become established methodologies to be replicated by other institutions. Pretalab, for example, is a program created by Silvana Bahia at Olabi's that became the Olabi’s umbrella focused in train black women working in the field of technology and promote an anti racist culture around this field.

Gabriela envisions and wants to build a new scenario in which the technological and innovation space has the major role of women, black people and other minorities groups in this field. And also a greater understanding of the role of new technologies permeated by society - considering their critical role - as well as professionals and institutions prepared for jobs of the future.

Gabriela grew up in several cities in the countryside of São Paulo. Part of a lower middle class family, she studied in private schools and had to live with different realities. Since she was little, she learned to live between these two worlds and to understand that this diversity of cultural, economic, and social references reflects the great concentration of income in the country. In the 2000s, Gabriela studied social communication at the University of São Paulo, and then worked as a journalist for 6 years in the digital departments of media groups. With this experience, Gabriela understood that technology is a language and that people needed to learn this language to understand the logic of its operations. Gabriela saw closely the changes that the new technologies brought to the field of journalism and realized that it was urgent for society to occupy the technological field more broadly.

Between 2009 and 2011 she was the community manager of the digital platform CulturaDigital.Br, of the Ministry of Culture, a public program that promoted participatory digital culture in the country. The social network won an honorable mention in the digital communities’ category of the Prix Ars Electronica in 2010, one of the most relevant awards in this subject. CulturaDigital.Br involved different civil society organizations, and had its communication and strategy organized by Casa da Cultura Digital, a collective created in São Paulo in 2009 that she was part since its early days. Interested in the transformation of society through digital technology, the decentralized movement was a pioneer in Brazil in discussions related to democracy and the Internet.

Gabriela realized that to undertake new ideas, it was necessary to have multiple skills and willingness to learn constantly; with this, she also realized that the link with support networks and with other people, projects, and organizations are important to create new standards and paradigms in society. In 2014 she founded Olabi, as a makerspace, a physical and virtual space that focuses on promoting diversity in innovation and technology, using "bottom-up" approaches, giving voice and space to actions that emerge from new protagonists, in especially of peripheral residents, women and black people.

Currently, the social organization is dedicated to projects that prepare Brazil for a more diverse, innovative and equitable future (especially in matters relating to work).